JetBlue Airways began flying in 2000 with a promise “to bring humanity back to air travel.”  That commitment is the backbone of the airline’s external brand, as well as its internal culture; JetBlue’s workers are “crewmembers,” whether they’re based on the ground, in the sky, or at the offices.

In 2014, for the tenth consecutive year, JetBlue received the highest honors in airline customer satisfaction among low-cost carriers in the J.D. Power North America Airline Satisfaction Study. A technological innovator from inception, JetBlue maintains and builds on its rapport with customers and crewmembers through a steady stream of story-driven videos. Jonathan Weitz is the manager of digital and online communications for JetBlue Airways, and he approaches his work with enthusiasm. 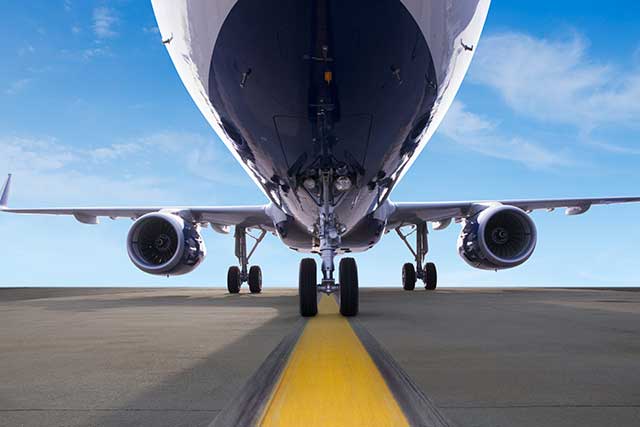 Adobe: Tell us about your background.
Weitz: I started my career in broadcast journalism, working as a camera operator and video editor in local affiliate television.  After seven years, I wanted to move into a reporter/producer role. Unfortunately, I looked too young for broadcast television. I went into radio, working my way up from weekend host to morning show co-host and executive producer. But my heart was in visual media, so I went back to school to get my master’s degree.

Graduate school led to my current career in digital and online strategy. I orchestrated the digital strategy at Pratt Institute, an art and design school. As a freelancer, I worked on video projects for commercial companies and for nonprofits like the Coalition for the Homeless, United Nations Foundation, and the 92nd Street Y.

Adobe: What led to your position at JetBlue?
Weitz: I’m a huge aviation geek; I even got my pilot’s license. When I heard that JetBlue was looking for a person to lead video projects, I jumped at the opportunity. 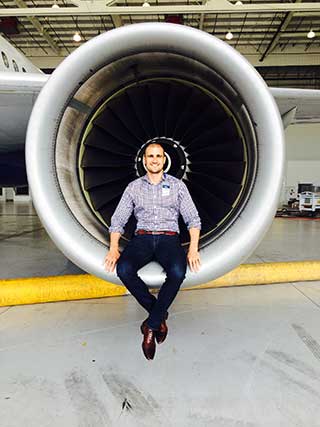 I’ve been here since July 2013. There are three of us on the video team and we produce approximately eight videos a month. It’s about 50/50 internal and external content. When I first started, entire projects were hired out, often at great expense. Now we do the majority of the work in-house but we also rely on a trusted list of New York-based freelancers to edit or shoot a project.

Adobe: Is there an overarching approach to content?
Weitz: JetBlue has a very strong external brand because of our culture, our crewmembers, and our values. We look at storytelling through lens of our crewmembers. What stories can we tell to engage, activate, and inspire them? For example, we recently produced a video tied to our new service to Detroit. Whenever we add a destination, we do something special to give back to that community.

In Detroit, we partnered with First Book, a nonprofit that provides new books to children in need. On our first day, JetBlue executives and crewmembers went to a grade school that had the poorest performance record in the state of Michigan for 2012/2013; its library was virtually empty. We donated brand new books and laptops, and students got their own books to take home.

We made that video for our crewmembers. A video like that makes people within JetBlue feel good about where they work, and encourages them to find their own ways to give back. JetBlue is in 87 different cities; showcasing these stories strengthen internal culture. That’s why JetBlue is the company it is.

Adobe: Is there crossover between internal and external videos?
Weitz: We consider repurposing potential with every video request. A lot of internal videos go external, including the Detroit video. We may edit an internal video to better address an external audience but the more longevity a video has, the better the return for us. All external, customer-facing videos go on YouTube and Vimeo, and are posted separately on our Facebook page. We use Vimeo for internal JetBlue videos, privacy-restricted to our Intranet site.

In June 2014 JetBlue introduced Mint, its refreshing new take on a premium coast-to-coast experience. We wanted a way to get crewmembers excited about Mint’s fully-flat seats, fresh dining options, and revitalizing amenities. We created a video series titled (Mint)roducing to highlight our partners and provide a bit of personal insight into the founders and vision behind each company. 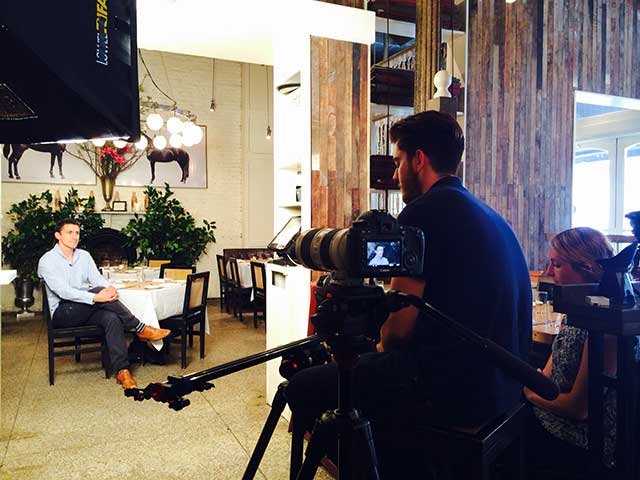 To date, we’ve created a video for Blue Marble Ice Cream, Mah-Ze-Dahr Bakery, Flying Food Group, and Saxon + Parole, with more to come. This is an ongoing series that will continuously live on and grow as we grow. The series certainly has crossover. It gives insight to our customers on what to expect onboard. It also gives crewmembers knowledge on the products and little gems of information that they can use when interacting with each other and our customers.

Adobe: Have you always worked with Adobe Premiere Pro?
Weitz: Earlier in my career I used Final Cut Pro a lot. After graduate school, I worked on a freelance project for Dell. The footage had been shot on RED, and I knew transcoding would take forever. That’s when I tried Premiere Pro for the first time. I’ve never looked back. 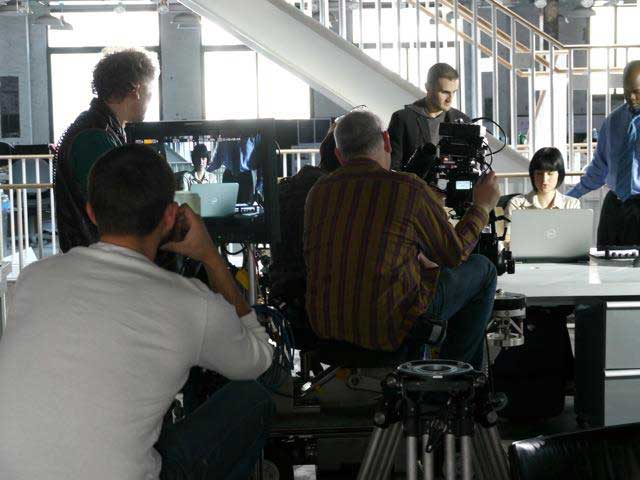 We use Premiere Pro for all video editing and Adobe proficiency is part of every discussion I have with freelancers. In fact, we have a template project folder setup—with an organized folder structure, project files, fonts, and style guides— so that our freelancers can spend less time on mechanics and more time on creativity all while keeping our videos consistent. 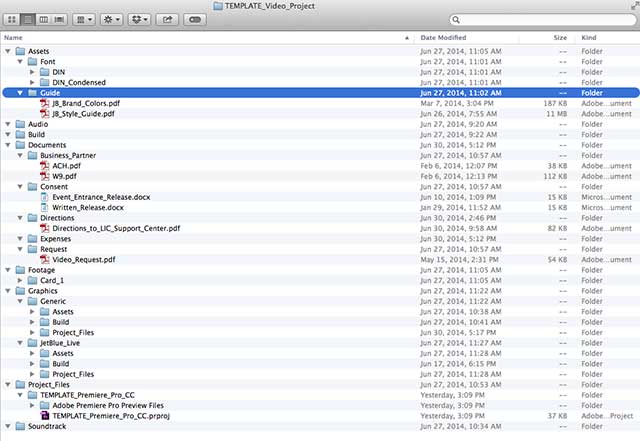 Adobe: Are you using other applications in Creative Cloud?
Weitz: Creative Cloud is great because it covers the entire spectrum of our creative departments. We use After Effects for all lower thirds, title cards, and graphics. We can create project files in After Effects and easily transfer them into Premiere Pro; there’s no need to import or export anything. 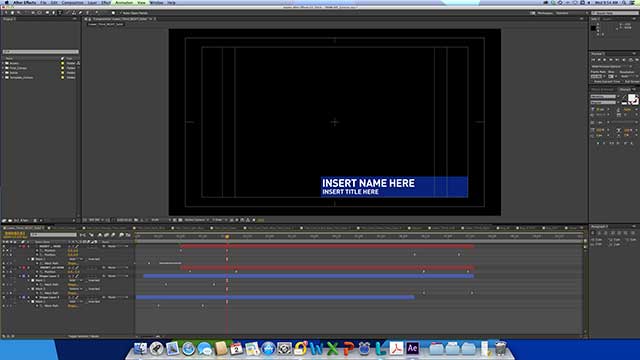 Creative Cloud is also a boon to our work with JetBlue’s design and brand team that creates the visual brand of JetBlue, everything from signage and seatback cards to the paint scheme of the airplanes. We’ll send the designers footage when we’re working on a video; they’ll, create an asset in Photoshop, send us the file, and everything is updated automatically.  We finish projects very quickly and we all work well together because everyone is one the same platform.

Adobe: Are there particular features or individual products in Creative Cloud that you like, or that help with deadlines?
Weitz: It used to be that you installed software from CDs and DVDs, and you had to wait for the next version to fix any bugs. With Creative Cloud we’re always working with the latest versions of a product. We have immediate access to anything that’s new, be it a feature or a fix, which is critical.

We spend a lot of time in Premiere Pro and the layout and user interface are elegant and easy to use. Adobe really understands what filmmakers and storytellers need to best do their jobs. The integration among app in Creative Cloud is terrific. We can be working in Premiere Pro and easily open an audio track or music track in Adobe Audition to clean up the sound, or jump to After Effects to add graphics.

Adobe: How did you create the “Thank you” video?
Weitz: We were ecstatic when we learned the results of the J.D. Power survey. We’re nothing without our customers and crewmembers, and we wanted to make a video to recognize the people who made this honor possible.

Whenever I visit a historic building, I think about what it must have been like at its peak. I began picturing an airport terminal that was deserted, but had clearly once been alive and thriving. “Thank you” juxtaposes empty spaces in a terminal against the audio hustle and bustle of a busy airport. When we scouted the airport to figure out our shots we also recorded the sounds that help tell the story: a baggage carousel turning; people talking; a gate announcement; the boarding call; the inflight crew welcoming people. The video came out exactly as we wanted: a heartfelt thank you to customers and crewmembers who bring this airline to life.