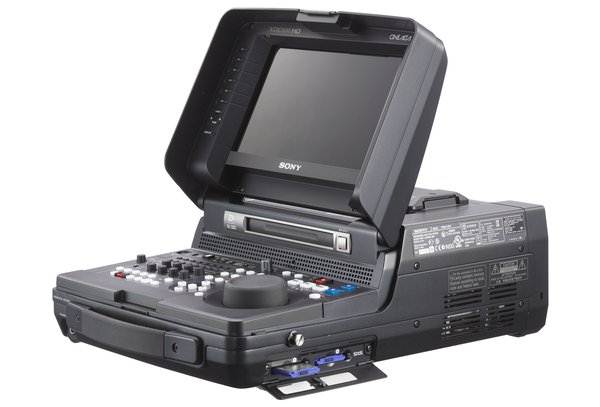 It slices. It dices. It juliennes fries.

If the Swiss Army made a file-based recorder, this would be it. The Sony PDW-HR1/MK1 field deck integrates an XDCAM® HD portable recorder with two SxS™ media slots. The new deck enables you to copy and transcode any flavor of XDCAM recording between SxS cards and Professional Disc™ media. So it’s a nifty solution for several field recording applications.

For starters, the PDW-HR1/MK1 is great for backing up SxS cards onto Professional Disc media, especially when you realize that the discs have an archival life of 50 years. For any organization that shoots both Professional Disc and SxS media, this deck puts it all together, integrating the output of both camcorder types. It’s also the first Sony deck to record and play XDCAM HD 422 at 50 Mbps using SxS media. It’s no coincidence that this matches the capabilities of the new PMW-500 camcorder, making the camcorder and portable deck the perfect companions.

File-based media mavens will recall some significant differences between XDCAM HD recording onto Professional Disc media and XDCAM EX recording onto SxS cards. Here again, Sony tips the hat to the Swiss Army. The PDW-HR1/MK1 is the universal tool for every flavor of XDCAM recording. The deck supports both UDF and FAT-32 file systems, both broadcast-standard MXF and IT-standard MP4 file wrappers, both 4:2:0 and 4:2:2 sampling, both PAL and SECAM, both SD and HD, both single-layer and dual layer discs, both SxS Pro and SxS-1 cards, plus every XDCAM data rate from 18 to 50 Mbps.

The PDW-HR1/MK1 offers some additional goodies.

All told, the PDW-HR1/MK1 is a capable piece of kit. However, corkscrew, knife, screwdriver and miniature scissors are not included.