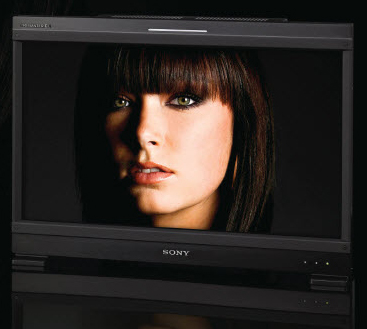 With the death of CRTs, those of us who needed to critically evaluate video images in a standardized display universe were left with no adequate replacement. Most of us have been nursing along our aging CRT monitors and hoping something of equal or better quality would arrive before our trusted displays give up the ghost. Well, that product has finally arrived, and I predict that Sony is going to own the pro monitor market for delivering it.

When the Europeans banned electronics with lead in them, it spelled the end of CRTs, which couldn’t be manufactured without lead shielding. This began a succession of attempts at building an evaluation monitor that could at least match a CRTs performance. This task proved more difficult than I could have imagined. First we were confronted with a series of slightly improving LCD options that never quite hit the mark. The final challenge, reproducing an actual black signal, was never overcome. (Some will argue that Dolby’s over $40,000 monitor achieved a pure black, but it is priced out of all but the narrowest markets.)

Plasmas have become our “almost good enough” stand-in for a CRT replacement, and as a consequence, they are prevalent in the professional TV and feature-finishing world. Unfortunately, manufacturers can’t or won’t make a pro plasma smaller than 42 inches. This is just too large to have up close to a colorist. Additionally, plasmas so far have been unable to accurately reproduce the color spaces used in professional workflows.

The requirements for a reference monitor are pretty high. I need to know beyond a doubt that the image I am looking at in my room will match the image that another pro in another location sees. Not only must all the of the signal must be visible, the reference points must be pure. So white looks white and black looks black and a gray field looks gray.

Over the years we have been hearing about (and seeing occasional teases for) several technologies that promised to handle these issues. Three examples are SED (Surface surface-conduction electron-emitter display), OLED (organic light-emitting diode) and FED (field emission display). I won’t go into the differences, or the various battles that have kept these technologies from hitting the market, if you care, you can find more info here: http://en.wikipedia.org/wiki/Next_generation_of_display_technology

At NAB 2010 TVLogic introduced a 15″ OLED panel, the LEM-150 It was beautiful and I was blown away. But it was too small at 15″ And fairly expensive at over $6,000. In January 2011 Sony showed a sneak peek of their new OLED product the BVM Trimaster EL series OLED Monitors. By NAB 2011, they were demoing the product in an impressive setup with an LCD, BVM CRT and the new BVM Trimaster in a side-by-side presentation. I was blown away.

The only catch was the approximately $25K price for the BVM E-250 OLED! Now, there are some who will say that’s the cost of doing business, but the reality is that there are very few business plans that can support that kind of overhead especially when buying monitors for multiple suites. Short of high-end feature work, and some broadcast television, the rest of the market including most broadcast, cable and independent features, have been squeezed so tight on budgets that investments of this scale are no longer justifiable. Sony’s answer to this problem was to create a PVM series of OLEDs in a far more reasonable price range. Enter the PVM-2541 http://pro.sony.com/bbsc/ssr/cat-monitors/cat-oledmonitors/product-PVM2541/ , a 25″ Professional OLED Picture Monitor with a list price of $6,100. (Currently $5,490 at several resellers online.) At this price point, the monitor begins to make sense. But does it deliver? At Alpha Dogs in Burbank, I had the chance to use an evaluation unit for four days. It sat right next to my CRT as I colored a show for Discovery Channel.

The first thing I noticed was that the blacks were blacker than those on my Sony Broadcast CRT monitor, an amazing feat by itself. Turning up the room lights, which washes out a CRT, left the OLED still showing a pure black. This chart illustrates how black the OLED monitor can get compared to CRTs and LCDs. 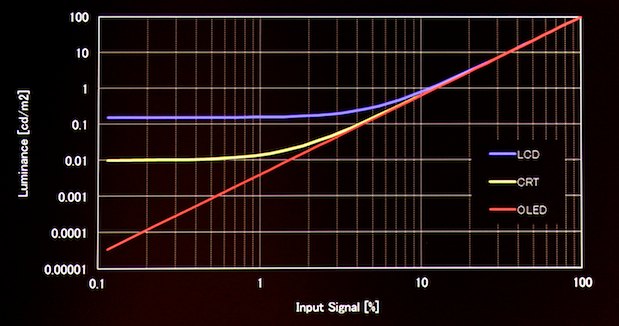 I was able to dial the monitor in to an exact match to my calibrated CRT so I could test against a standard I know. After a few days, the only other perceptible difference between the two monitors was one of detail. My CRT was starting to look very blurry. With a multiburst test signal fed to the PVM-2541, I could clearly see the very fine black and white bars on the right side which just blend to a gray field on the CRT. That resolution difference soured me on my trusty CRT. So it appeared I was gaining resolution without sacrificing color rendition. 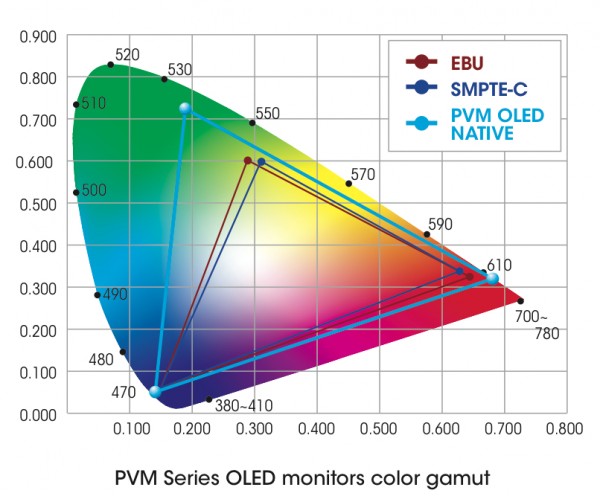 The upshot?… I’ve ordered them to replace all my CRTs.

To sum it up with real world hands on use, I’ll list the pros and then the cons of the new PVM monitor.
Pros:
+To my eye (and those of other colorists at Alpha Dogs) we finally have an acceptable CRT replacement.
+The purest blacks I’ve seen on any monitor.
+The price point of $6,000 is very manageable when Sony is promising 30,000 hours of life in the OLED panel. That’s about 3.5 years if you never turn it off.
+The monitor can be easily calibrated with a probe and Sony’s automatic white balance software found here. While the instruction manual recommends a probe that costs north of $8,000, the marketing brochure also suggests the Xrite i1 Pro, that can be found online for around $750. (And a Sony engineer confided that he uses the i1 all the time) 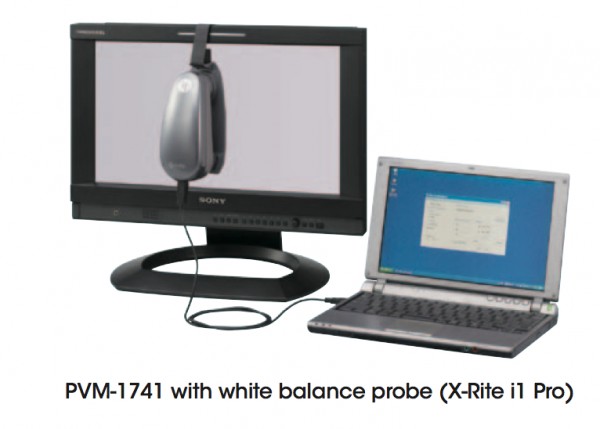 + Interlaced/Progressive mode selection. I/P mode deserves a chapter of it’s own. (Geek warning, if you don’t want your head to hurt, skip this section) Like LCD displays, Sony’s OLED displays are progressive monitors. If you feed one a progressive signal, it has no problem. But to display an interlaced signal on a progressive display, you have to do some processing and make some sacrifices. Sony’s PVM series monitors give you four options for handling that processing. Each option offers a trade off between picture quality and processing delay. In ascending order of quality, Line Doubling does just what it sounds like, doubling the lines to give you better temporal resolution while losing spatial resolution. This also causes the shortest delay at a half frame. Field Merge puts the two fields together. This is fine for PsF footage, but interlace footage looks nasty. Intra-Field interpolates between the two fields of a frame. Inter-Field actually looks ahead to other frames to interpolate between them giving a much smoother image at a 2.5 frame delay penalty. (The BVM OLED does this Inter-Field processing without delay by buffering previous frames.) 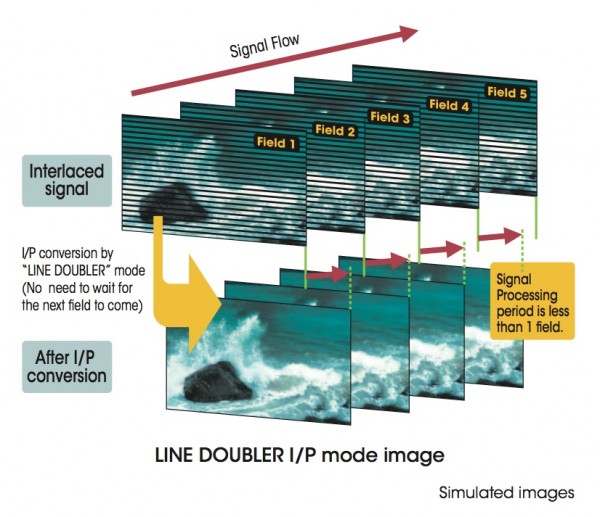 +Comes with two 3G HDSDI, one HDMI and one composite video inputs. All anyone really needs anymore. 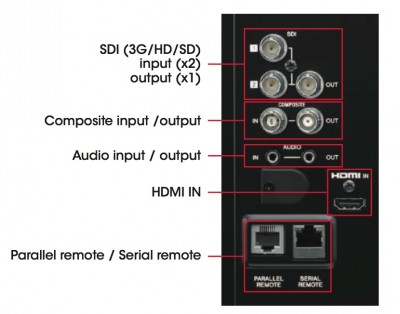 +10 bit processing and display.
+Built in frame markers for a host of aspect ratios.
+Built in waveform and audio meter. I will never use these as proper color correction requires good external scope, but they could be good for field production. Cons:
-Limited viewing axis. As with LCDs, when you get too far off center, the color shifts. Excellent off-axis viewing is one thing I really miss about CRTs that even plasmas handle better. This means you have to be careful about placement in your viewing environment.
-Audio sync will be an issue with interlaced material depending upon the I/P mode you use. See above.
-Burn-in. OLEDs are like plasmas in this regard and you have to be careful with them. The PVM has a built in screensaver that dims the picture if it sits on a still frame for ten minutes. But leaving up a mask or BITC could be fatal.
-Shorter lifetime of OLED panels. I had to weigh this one on a business side. We don’t really run our monitors 24/7 all year around. They do get spurts of that but not all year. I’m figuring I’ll get five years out of the panels. That comes to $1,100 a year. I can easily amortize that in a professional viewing environment.

Finally, I won’t count this as a negative for the PVM, but there are some things the BVM has that don’t trickle down to the PVM. If you can afford a BVM, then you should download this PVM vs. BVM OLED and compare the features between the two and see if you need the extras the BVM provides. If you can’t, then don’t bother looking, you’ll just get envious. 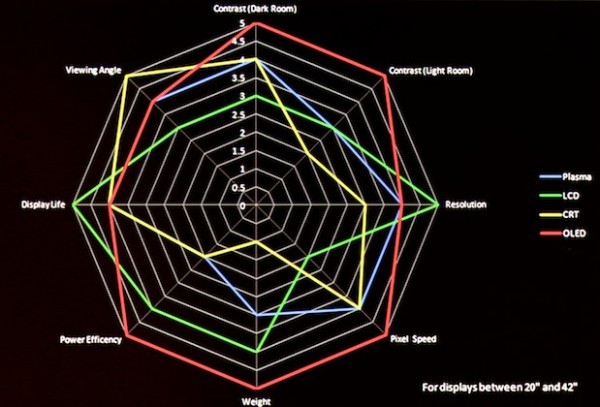 Here is an interesting feature comparison chart from Sony.