The PMW-F5 and F55 are fantastic cameras. If you have the AXS-R5 raw recorder the dynamic range is amazing. In addition because there is no gamma applied to the raw material you can be very free with where you set middle grey. Really the key to getting good raw is simply not to over expose the highlights. Provided nothing is clipped, it should grade well. One issue though is that there is no way to show 14 stops of dynamic range in a pleasing way with current display or viewfinder technologies and at the moment the only exposure tool you have built in to the F5/F55 cameras are zebras.

My experience over many shoots with the camera is that if you set zebras to 100% and don’t use a LUT (so your monitoring using S-Log2) and expose so that your just starting to see zebra 2 (100%) on your highlights, you will in most cases have 2 stops or more of overexposure headroom in the raw material. That’s fine and quite useable, but shoot like this and the viewfinder images will look very flat and in most cases over exposed. The problem is that S-Log 2′s designed white point is only 59% and middle grey is 32%. If you’re exposing so your highlights are at 100%, then white is likely to be much higher than the designed level, which also means middle grey and your entire mid-range will be excessively high. This then pushes those mid’s into the more compressed part of the curve, squashing them all together and making the scene look extremely flat. This also has an impact on the ability to focus correctly as best focus is less obvious with a low contrast image. As a result of the over exposed look it’s often tempting to stop down a little, but this is then wasting a lot of available raw data.

So, what can you do? Well you can add a LUT. The F5 and F55 have 3 LUTS available. The LUTS are based either on REC709 (P1) or Hypergamma (P2 and P3). These will add more contrast to the VF image, but they show considerably less dynamic range than S-Log2. My experience with using these LUT’s is that on every shoot I have done so far, most of my raw material has typically had at least 3 stops of un-used headroom. Now I could simply overexpose a little to make better use of that headroom, but I hate looking into the viewfinder and seeing an overexposed image.

Why is it so important to use that extra range? It’s important because if you record at a higher level the signal to noise ratio is better and after grading you will have less noise in the finished production.

Firmware release 1.13 added a new feature to the F5 and F55, EI Gain.  EI or Exposure Index gain allows you to change the ISO of the LUT output. It has NO effect on the raw recordings, it ONLY affects the Look Up Tables. So if you have the LUT’s turned on, you can now reduce the gain on the Viewfinder, HDSDI outputs as well as the SxS recordings (see this post for more on the EI gain). By using EI gain and an ISO lower than the cameras native ISO I can reduce the brightness of the view in the viewfinder. In addition the zebras measure the signal AFTER the application of the LUT or EI gain. So if you expose using a LUT and zebra 2 just showing on your highlights and then turn on the EI gain and set it to 800 on an F5 (native 2000ISO) or 640 on an F55 (native 1250ISO) and adjust your exposure so that zebra 2 is once agin just showing you will be opening your aperture by 1.5 (F5) or 1 (F55) stop. As a result the raw recordings will be 1.5/1 stop brighter.

In order to establish for my own benefit which was the best EI gain setting to use I spent a morning trying different settings. What I wanted to find was a reliable way to expose at a good high level to minimize noise but still have a little headroom in reserve. I wanted to use a LUT so that I have a nice high contrast image to help with focus. I chose to concentrate on the P3 LUT as this uses hypergamma with a grey point at 40% so the mid-range should not look underexposed and contrast would be quite normal looking.

When using EI ISO 800 and exposing the clouds in the scene so that zebras were just showing on the very brightest parts of the clouds the image below is what the scene looked like when viewed both in the viewfinder and when opened up in Resolve. Also below is the same frame from the raw footage both before and after grading. You can click on any of the images to see a larger view.

As you can see using LUT P3 and 800 EI ISO (PMW-F5) and zebra 2 just showing on the brightest parts of the clouds my raw footage is recorded at a level roughly 1.5 stops brighter than it would have been if I had not used EI gain.

But even at this level there is no clipping anywhere in the scene, so I still have some extra head room. So what happens if I expose one more stop brighter?

Raw clip at +1 stop prior to grade.

Raw at +1 stop after grade, no sign of any clipping.

So, as you can see above even with zebras over all of the brighter clouds and the exposure at +1 stop over where the zebras were just appearing on the brightest parts of the clouds there was no clipping. So I still have some headroom left, so I went 1 stop brighter again. The image in the viewfinder is now seriously over exposed.

The XDCAM recording at +2 stops, the sky and clouds look very overexposed.

After the grade the raw is looking much better, but there is a bit of clipping on the very brightest clouds.

The lower of the 3 images above is very telling. Now there is some clipping, you can see it on the waveform. It’s only on the very brightest clouds, but I have no reached the limit of my exposure headroom.

Based on these tests I feel very comfortable exposing my F5 in raw by using LUT P3 with EI gain at 800 and having zebra 2 starting to appear on my highlights. That would result in about 1.5 stops of headroom. If you are shooting a flat scene you could even go to 640 ISO which would give you one safe stop over the first appearance of zebra 2. On the F55 this would equate to using EI 640 with LUT P3 and having a little over 1.5 stops of headroom over the onset of zebras or EI 400 giving about 1 stop of headroom.

My recommendation having carried out these tests would be to make use of the lower EI gain settings to brighten your recorded image. This will result in cleaner, lower noise footage and also allow you to “see” a little deeper into the shadows in the grade. How low you go will depend on how much headroom you want, but even if you use 640 on the F5 or 400 on the F55 you should still have enough headroom above the onset of zebra 2 to stay out of clipping. 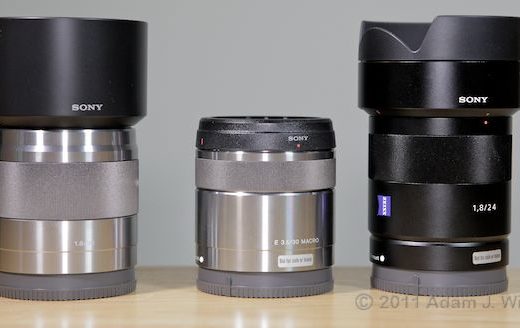