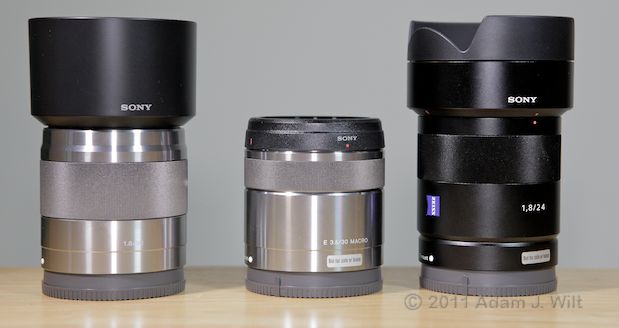 Sony has three E-Mount primes coming out right about now, and I had a chance to play with prototypes of them attached to an NEX-FS100 LSS camcorder. Here are my impressions, and a short test.

E-Mount is the interchangeable lens mount used on Sony’s NEX-series of still and video cameras. NEX cams use APS-C-sized sensors; in film/video terms these are roughly equivalent to Super35mm. The NEX cams are all “mirrorless” designs allowing a shallow 18mm flange depth and compact, lightweight lens designs.

The 50mm, 30mm, and 24mm end-on. I didn’t realize the 30mm’s anti-flare mask was removable until after I shot this picture.

All three lenses are about 2.5″ (65mm) long and of comparable width.

The Zeiss 24mm is the heavyweight of the bunch, at 7.9 oz (225g), with the 50mm right behind it at 7.25 oz / 202g. The 30mm macro is a mere 4.9 oz / 138g; it is so light that I nearly dropped it on the ceiling taking it out of its box! In all seriousness, it’s such a featherweight that I had to look twice to make sure I had been sent a prototype lens and not an empty shell; indeed all these lenses feel lighter than they should. Nonetheless, Sony assures me that the barrels are aluminum and the elements are glass.

The 30mm and 50mm primes are finished in polished, machined aluminum, with matte, off-white markings (focal length, maximum aperture, etc.)—very elegant, but rather low-contrast and hard to read. As there is no focusing mark, distance scale, or iris setting on the lens body, this lack of readability isn’t much of an issue; it only comes into play when trying to figure out what lens one has in hand, or how to orient it to attach it to the camera. 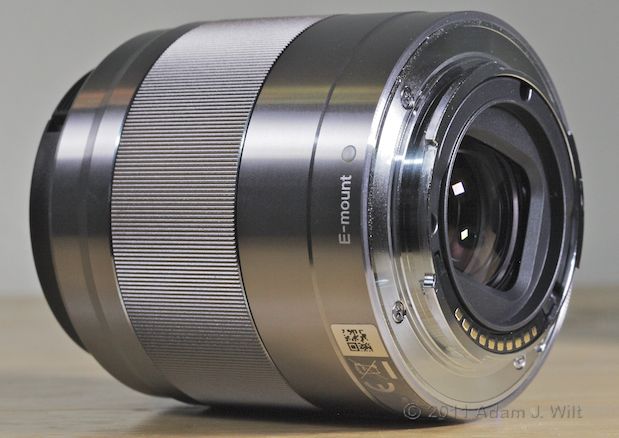 SEL30F35M, with its E-Mount and electrical contacts visible.

The 24mm Sonnar, by contrast, is surfaced in basic black with contrasty white markings, and sports a Zeiss badge on the side. 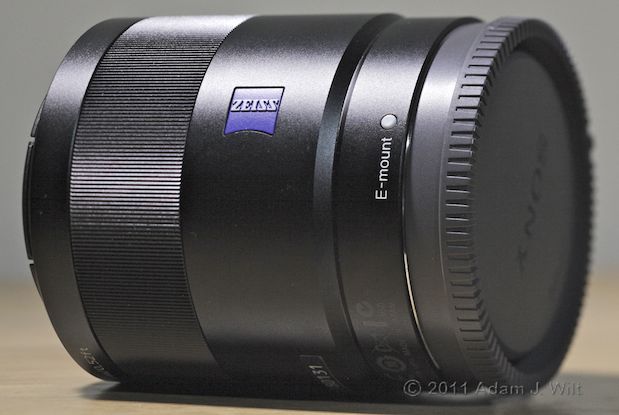 All lenses employ a free-spinning servo-focus ring, and no other controls: iris is governed with a dial on the camera body. The rings are nicely damped, with a smooth, fluid feel, and their milled surfaces make them easy to find and to turn.

The lenses are supplied with bayonet-mount lens hoods (the one on the 30mm is more of an anti-glare mask than a hood, allowing close approaches in macro mode), and accept 49mm filters. Each comes with a snap-on front cap, and a large gray rear cap (seen on the 24mm, above) that’s the best-designed, easiest-to-grab rear lens cap I’ve seen on any format.

The 24mm comes ensconced in a soft case with a drawstring. The other lenses have to fend for themselves.

The silver 30mm and 50mm lenses are made in China. The 24mm Zeiss comes from Japan.

I put the lenses on a Sony NEX-FS100 large-single-sensor camcorder to test them out. Not surprisingly, they perform like a good set of primes lenses should: they’re sharp, contrasty, and low in distortion, even at full-wide-open apertures. 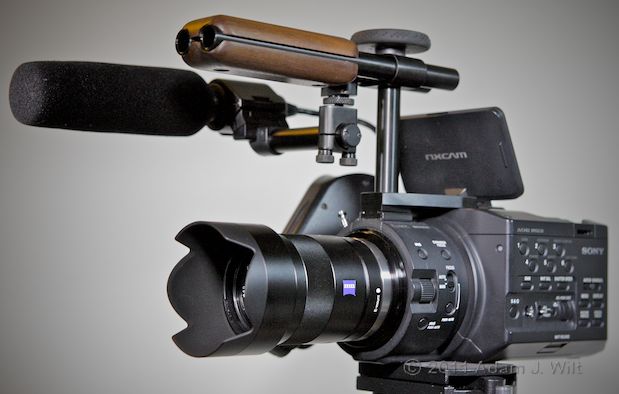 The NEX-FS100 with the 24mm and Caleb Crosby’s top handle.

I’ll discuss the lenses collectively, breaking out unique details only when necessary.

Distortion: none to speak of. I put each lens on the camera, found a nice, straight horizontal line, and tilted the cam until the line was at the top or bottom of the viewfinder. The straight lines stayed straight the whole time.

Sharpness: like all 1080p camcorders, the FS100 is essentially a 2 Mpixel camera; even cheap lenses will resolve decently on it… but cheap lenses will show softness in the corners, soft edges, and reduced contrast overall, especially when wide open. These lenses looked sharp, contrasty, and crisp edge-to-edge, even when fully wide open.

Focusing: the manual focus rings are rate-sensitive servo controls; the faster you turn them, the shorter their throw. They are not end-stoppable nor repeatable, nor are they equipped with focusing scales or marks of any kind. The focus rings turn in the “proper” direction, like cine and video lens rings, and like Canon lenses (opposite the direction of Nikon focus rings).

Autofocus is quick and sure in most instances, though the 30mm macro, if in macro mode, can take a while to focus at a far subject. There is minimal hunting, at least on the FS100.

There is no breathing (change in image magnification as focus is changed) to speak of.

The 24mm and 50mm are equipped with “Direct Manual Focus”, allowing you to override autofocus with a twist of the ring, but this only enabled on the still cameras. If you’re shooting with the FS100 and using autofocus, any override of the camera’s selected focus point requires throwing the body-mounted switch from AUTO to MANUAL, refocusing, and then throwing the switch the other way, a tedious and undesirable workaround.

The 30mm’s claim to fame is that it’s a macro, and it does not disappoint: at a sensor-plane-to-subject distance of 3.8 inches or 9.5cm, images are projected upon the imager at 1:1 magnification ratio: life-size. Because the front of the lens itself is already about 3.2 inches in front of the sensor, that 1:1 subject will be pretty darned close to the lens; your biggest challenge will be getting that subject properly lit: 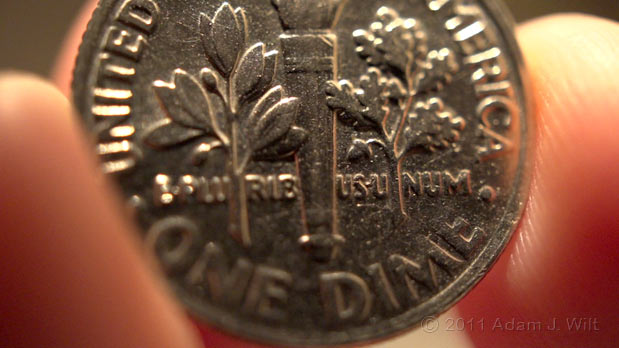 A dime, life-size. Chiaroscuro lighting courtesy of my inability to squeeze my studio lighting kit between my fingers, the dime, and the lens.

Out-of-focusing, a.k.a. bokeh: it’s easiest just to show this, using the view from the LCD with lens data display enabled. I set the lenses to their nearest possible focus, and shot Christmas lights a few feet away while dialing down the iris. For completeness, I’ve also included the 18-200mm kit lens at both 50mm and 200mm. Note the quality of the bokeh, and look also at the speed and smoothness of the aperture changes; I wouldn’t mind pulling aperture on the 24mm or the 50mm while rolling, but I’d rather set the 30mm’s iris and leave it for the duration of a shot.

Aperture pulls on all three lenses, plus the 18-200mm kit lens.

Flare: minimal. The lenses are well-matched to the camera and show only a faint flare opposite any in-the-picture light source—and not always then. By comparison, the Nikon 50mm f/1.4D, 35mm F/2D, and 17-55mm f/2.8G lenses I’ve been using with an adapter all show a stronger opposite-side flare on the FS100 than the E-mount lenses do.

Optical SteadyShot: the 50mm has OSS, the others do not. It’s Sony’s typical SteadyShot: rock solid if you’ve got the camera reasonably stable, with minimal overshoot or panning lag. With OSS, I was able to do a passable job of handheld lockdowns. Without it, not so much… Put another way, my handheld shots with the 50mm, OSS on, were quite a bit smoother and more stable than my handheld shots with the 24mm, which lacks OSS.

I had about three-quarters of an hour to wander the streets the night before shipping the lenses back to Sony. I had with me the 24mm and the 50mm; the one not on the camera was in the 24mm’s soft case, dangling by its drawstring from the little finger on my left hand (I said these lenses weren’t too heavy!). I intended to shoot everything at 1/60, f/1.8, ISO 16,000, just because I could.

After retiring from the main street because it was too bright to shoot at my desired settings (!), I whipped up a spec spot in the gloom of a parking lot:

Observe…
…the airplane, on a right base leg for landing at SFO, in the opening shot.
…the straightness of straight lines during the pan.
…the sharpness of the lens wide-open in the close-ups (I had neglected to focus properly for the opening shot because I was rushing to catch that airplane, so the opening shot is a bit soft).
…the lack of flare from the in-the-picture light sources.
…the ease of going out of focus, and the quality of the bokeh.

This is a nice set of ILC primes (Interchangeable Lens Camera being the term that’s sticking for compact, mirrorless still cameras and their cousins), complete with all the plusses and minuses typical of the breed.

On the plus side, the lenses are electrically coupled to E-Mount cameras, so you have full control—and data readouts—of focus and iris. The mounts are native, so there’s no futzing around with adapters, and the lenses are both small and light. Since they’re designed for E-mount cameras, their optical qualities are a good match for NEX-series cameras, as evidenced by their performance overall and the lack of flare specifically. The 24mm and 50mm provide much-needed wide-aperture choices for NEX cameras, so these are welcome additions to the E-mount roster. The 30mm macro get you life-size images for $249; that’s heck of a deal for a macro lens.

On the minus side, at least with the NEX-FS100, focusing these lenses is an either/or proposition: either you’re in autofocus, or in manual. You can’t override autofocus on the FS100 as you can on the still cams, except by changing modes or pressing PUSH AUTO on the camera body. And in manual mode, they have free-spinning servo rings, not mechanically-coupled, repeatable controls—not an issue for stills, but problematic for precise video work.

Neither point is unique to the NEX-FS100; my GH2 behaves the same way with its Lumix-series lenses.

My only other quibble is that $999 seems like a lot of money for the 24mm, especially since it lacks SteadyShot—though I can’t find fault with its performance otherwise. [Disclaimer: I just spent $1200 on a 25mm f/0.95 Nokton for the GH2, which isn’t anywhere near the performance of the Zeiss 24mm, so I may not be the right person to talk about value for money!]

FTC Disclaimer: No material connection exists between me and Sony. Sony has sent me an FS100 and a bunch of accessories are their expense, which I’ll return at my expense. Sony sent me the three lenses for a quick ‘n’ dirty review, which I returned at their expense on a short deadline. Caleb Crosby sent me a top handle for review; it’ll be returned at my expense once I’m done with the camera.