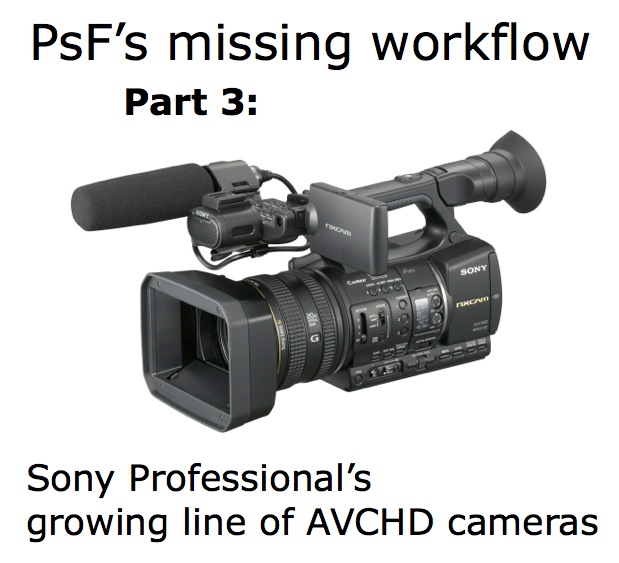 The terms benign PsF and Malignant PsF were introduced in Part 1 of this series called PsF’s missing workflow.

The first NXCAM to be released was the HXR-NX5 (I published a first look in November 2009 and Adam Wilt published a complete review in January 2010. Then Adam published his updated article a couple of days later. ) In my first look, I published that the USA segregated version recorded 1080/29.97p natively, based upon preliminary verbal information from Sony. At that time, I didn’t have access to tools to verify whether that was indeed the case (i.e. whether it was really native, or some type of PsF). Fortunately, I retained test footage I shot back in November 2009 with the loaner camera, and now I can tell you that although the footage I shot at 29.97p is actually not native, fortunately it is benign PsF, so starting with Premiere Pro CS5.5 (and Final Cut Pro X), it is thankfully detected and treated automatically as progressive. However, if you are using Premiere Pro CS5 or earlier, to avoid many negative side effects you need to inform the program that the footage you shot at 29.97p is indeed progressive, using either the technique I showed in this prior article, or with other methods I’ll explain in upcoming articles. The HXR-NX5 lent to me by Sony back then had not (yet) received the WorldCam upgrade, but it is very likely to be the same case with 25p shot with the 50Hz version of the camera, or with the WorldCam version. On the other hand, the test footage I shot as 23.976p back then is indeed native (no PsF and no pulldown) which is -of course- even better than benign PsF. 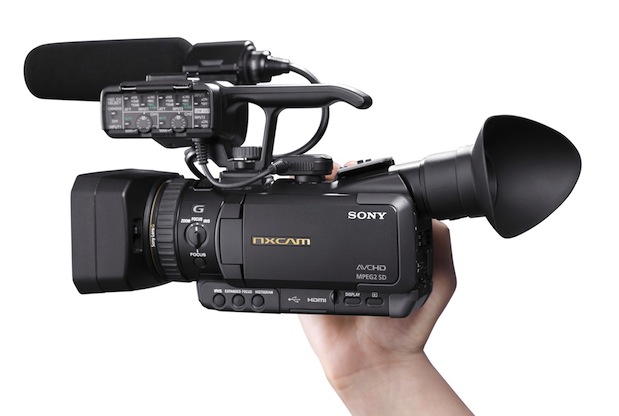 Above is the HXR-NX70 which I’ll be reviewing as soon as I receive it from Sony. This is the semi-waterproof model (as long as you remove the balanced XLR unit). 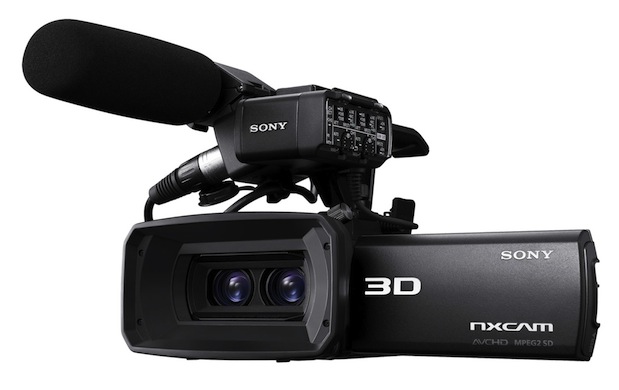 Above is the HXR-NX3D1 which I’ll be reviewing as soon as I receive it from Sony. This is the model that can shoot either 2D or 3D, and is unique in its price range since it comes standard as WorldCam.

By omission in their respective published specs, the NX3D1 (all versions) and NX70U (USA segregated version) have both abandoned the 1080/29.97p framerate anyway, but the 50Hz segregated NX70 version (and the WorldCam NX70, if Sony decides to offer it) is likely to record benign 25PsF, as is the NX3D1 (which is interestingly always WorldCam). The 23.976p mode (model dependent) will certainly record natively as published by Sony (and as I tested with the HXR-NX5), but I’ll know for sure when I receive the NX70 and NX3D1 to review them, and/or when someone sends me sample footage from the NEX-FS100.

What about Adam Wilt’s trick to get progressive from the interlaced only HXR-MC50?

About a month ago, I visited a consulting client in South Florida and was surprised to see that she had purchased two HXR-MC50U cameras to shoot interviews in a studio environment, not with a video mixer (“switcher”), but in iso-cam mode and then combining the two recordings in post. To be completely honest (being a progressive video fanatic and perhaps even a progressive evangelist), I cringed knowing that this camera is interlaced only, but then I immediately recalled that Adam Wilt had published a “trick” to get it to produce a progressive recording by setting the shutter to 1/30. Back in September 2010, Adam published his detailed review about this camera. The trick Adam had published a year earlier on the third page of his review was still ticking in the back of my mind, but at that moment I forced myself to understand why it works: Of course: It’s a CMOS, and a CMOS is naturally progressive. If I am shooting to a recorder that records 59.94i, but I set the shutter speed to “1/30” (which must truly be 1/29.97), the two fields being recorded must be identical, so the camera must be recording PsF with that shutter speed. So I had my client shoot a minute of test footage at that shutter speed to make sure she liked the esthetic look of a 29.97p shot with that shutter speed. Being a talking head, there really wasn’t much movement, and she was pleased with the look. Then I imported the footage into her editing software, determined that it was (as expected) malignant PsF, so I taught her how to tell the editing software to treat it as progressive. Thank you Adam! That same technique would probably work equally well with any CMOS camera which records at 59.94i by setting the shutter speed to “1/30” (or with any CMOS camera which records at 50i by setting the shutter speed to 1/25th), although that may be an acceptable shutter speed only for talking heads and similar subjects with little movement. Despite the interlaced broken chroma encoding often mentioned by Adam, this is probably the best way to shoot talking heads if you are forced to use an interlaced-only CMOS camera that gives you manual control over the shutter speed and you know that you’ll be delivering progressive (i.e. for the web, mobile devices, projectors, LCD screens or plasmas). Of course, I’d prefer to have a camera with balanced audio inputs and native progressive recording, or at least benign PsF at any shutter speed.

PsF status of other devices/software workarounds

Upcoming articles in this PsF’s missing workflow series will reveal the PsF status of other devices, including standalone recorders. I’ll also cover the necessary workarounds with several software programs, and my conclusions about this situation. To be sure you don’t miss any articles, sign up for my mailing list here.

Since I know we have an international audience and we are living in the global village (thanks Marshall McLuhan), when I mention model numbers, I purposely omit regional suffixes when they make absolutely no difference in a product’s features or functionality worldwide. I include these suffixes only when making specific reference to differences among regional variants. So if you see a model number I mention and you are used to seeing that same model number with an “E”, “J”, “N”, “U”, or “P” suffix, what I am writing is applicable to any version, with any suffix. Those few times I do include the suffix, it’s because I am specifically describing features which are specifically added or missing from that version of the product. I encourage all journalists in all media to do the same. I am constantly researching the possible variants among model numbers in the international marketplace. Often, video equipment manufacturers restrict certain functionality in regional versions, and sometimes they use a strict regional warranty system. Sometimes the manufacturers do this to avoid grey marketing (i.e. to encourage purchasing of products in a local region, to protect local distribution), and sometimes it’s to avoid extremely high import tariffs in a specific market. When they do this, the manufacturers often add a regional suffix to the model number.