Size matters, but not as much as you might think. 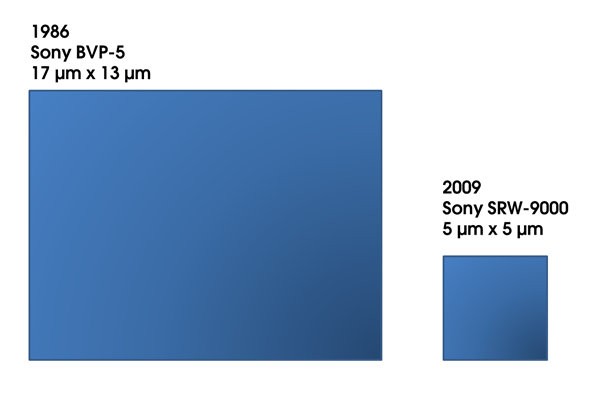 There’s no question which photosensor is bigger. But which is better?

In the 1980s, when dinosaurs walked the earth, high definition cameras cost more than suburban family houses and weighed more than anyone wanted to shoulder. Today, you can put a pair of HD camcorders in your pocket and still have room for keys. Where will it all end? Will a 4K image sensor eventually be engraved on the head of a pin? When you go small, what do you give up? If you can’t break the laws of physics, how badly can you bend them? Mark Schubin wrote a classic magazine article on what he called the “format factor,” examining the practical and technical implications of changing sensor size. Let’s look at just one aspect, the fundamental tradeoff between the size of individual photosites and their quality.

In the time-tested weasel, “when all things are equal” smaller photosites deliver higher resolution-at the cost of lower pixel quality. The hit in quality can come in three guises:

Diffraction issues are a physical constraint beyond the control of even Sony’s smartest sensor designers. But sensitivity and noise are both fair game for all sorts of incremental, micron-scale improvements. When you add up generation after generation of such improvements, the differences can be huge.

For example, there’s the issue of fill factor, the percentage of sensor surface area that is actually photosensitive. Both CCD and CMOS sensors devote a portion of the surface area to housekeeping functions, lowering fill factor. But Sony has gotten progressively smarter at affixing microlenses in front of each photosensor. The lenses capture light that would otherwise be lost in the margins. These refinements have been labeled the Hyper HAD (1990), Power HAD (1998), and Power HAD FX (2000) CCDs. And Sony has brought comparable innovation to CMOS sensors, including Exmor™ R back illumination technology.

There’s another, more obscure thread of innovation: improvement in the quantum efficiency of the photosites themselves. There’s a reason you don’t read much about this in camera spec sheets. These are carefully guarded trade secrets among the semiconductor engineers. And they’re just not talking.

The net effect is that sensors are getting better and better. That’s how digital still cameras can keep upping the megapixel count without paying a penalty in low-light performance. So is bigger always better? In our example of the two Sony cameras, the old BVP-5 photosite has nine times the area of the SRW-9000 photosite. “Other things being equal,” it should be three stops more light sensitive. In reality, the SRW-9000 is superior in every respect.

You already sensed that was coming.