From a Demo Artist’s point of view.

5. So does this mean I don’t need plugins? Smoke and the ConnectFX workflow has a lot of built in effects and effects tools built right in. So no, you may not need plugins depending on your needs. Smoke contains one of the best chroma keyers in any software, the Master Keyer, and even has a node based keyer for more advanced keying. Effects like Blurs, Glows, Depth of Field, Stylize Pen/Ink/Sketch looks, Recursive & Timewarp tools, Customizable 3D lens flares with occlusion and 3D text, and a host of other tools are built right in. {C} 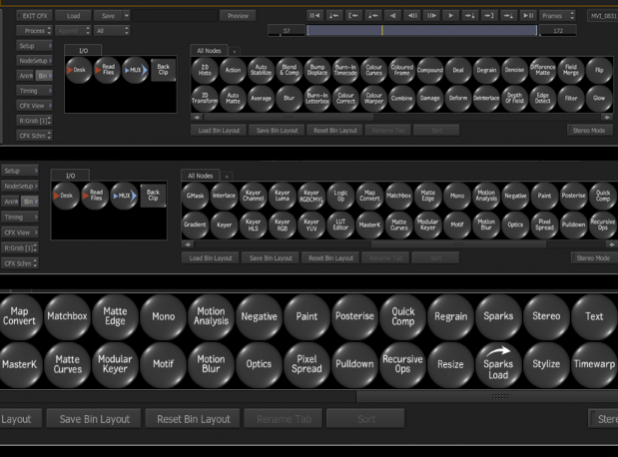 So unless you need something very specific, Smoke has enough tools for most tasks. But if you do want plugins, then you are limited to a few vendors. Genarts is the main developer for plugins or Sparks as they are called in Smoke. Genarts makes Sapphire and Monster GT plugins that complement the tools already in Smoke.

6. What formats can I Import/Exports? Many options like this are still being decided and implemented as Smoke 2013 isn’t due to be final until Fall. But most, if not all, of the standard production codecs are there in Quicktime or MXF inputs and/or outputs, including Prores, DNxHD, XDCAM, R3D, Arri, P2, DVCPROHD, AVC-Intra, DPX, Uncompressed, AVCHD, layered PSDs, OpenEXR, and more.

7. Can I conform from Avid and FCP? Smoke has always been a high-end finishing system. So nothing has changed here. Just because you can edit easily and more comfortably doesn’t mean that you can’t still conform from other systems. Conforming a timeline is a simple as dragging and dropping the .xml/aaf file into your Media Library. Smoke will find and relink the media. Smoke will conform from FCP7 and FCPX XMLs, as well as Avid AMA managed AAFs, and transcoded DNxHD AAFs. You can even bring in an Adobe Premiere AAF sequence.
If this is how you workflow is working… Smoke can handle it.

By this time in the demo the people I was talking to really started to get what Smoke was all about. They could really see the benefit of Smoke’s All-In-One Workflow. They could see how importing, editing, color, and effects all based in the timeline, and all quickly and easily accessible and integrated could enhance their productions and end the round tripping from one program to another.

Smoke will be available as a public beta starting in June. Go to http://www.autodesk.com/smoke-trial and register to be one of the first to get your hands on it. Smoke will run on almost any new Mac hardware or current MacPro. I was demoing it on a standard, new iMac, and it was also being shown running on a MacbookPro.