The NLE revolution isn’t over… Enter Autodesk Smoke for Mac

Editing & Effects All-In-One
Autodesk has always been known for the strength of their effects and image processing tools. The tools in Smoke have been used in everything from major Hollywood blockbusters, to national commercials for major corporations, to finishing shows airing on premium cable and broadcast networks. Personally, knowing that I am using these same tools for my local broadcast promos… gets me where my geek lives. Smoke has some very powerful tools. Who wouldn’t want to use those same tools on their own projects?
{C}

For most of us, editing is more than just doing the offline cut. At WTHR-TV, I am responsible for the editorial, graphic design, audio mixing, and export/compression of the final product. I imagine that this is more and more common as editors are taxed to perform additional duties. To make it easy for the editor to work with effects, Smoke 2013 makes all of the effects accessible from the timeline. You can apply effects on a per clip basis, and you can apply effects to Gaps above clips and layers, which can be used as adjustment layers. But the biggest advantage Smoke has over any other NLE for effects work is ConnectFX. 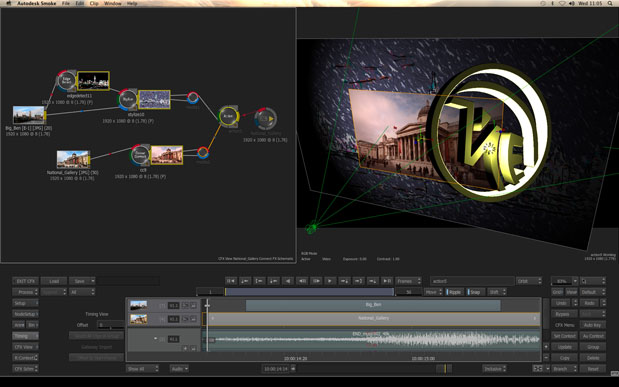 ConnectFX is the Node based effects system. After Effects is a layer based effects system where one affect is stacked on top of another. Smoke’s effects are node based like Nuke and Autodesk’s Flame. There are advantages to both layer and node based effects compositing. The beauty is, Smoke has both. If you have a scene where you need to do chroma-key over a background and add text over both, then that’s easy to do on the timeline if you prefer. For bigger compositions with multiple layers being effected and interacting in X,Y,Z planes, along with true 3D geometries and 3D text, then a node based approach can make complex tasks a bit easier to create and understand.

You can enter ConnectFX from a clip level on the timeline or you can take multiple clips on multiple tracks directly into ConnectFX and retain their temporal relationship. Any effects you may have started on the timeline like color, or repositions will also be retained and become nodes inside ConnectFX. By working from the timeline, the timing and pacing of your editorial is retained and adding effects is easy.
This is just some of the way in which I have used Smoke’s node-based ConnectFX in my work at WTHR-TV. Everything you see was done in Smoke, including the 3D text and logos. The only logo not built in Smoke is the Red ‘13′ Box logo.

So if you are being asked to do more effects, color, and compositing along with your editing, then Smoke gives you all of these tools, all in one application. For spot work it’s superb. For longer editorial that’s content based with some color grading, Smoke handles that just as easily. I encourage you to check it out, and download the pre-release trial that is available in June.