When does the RX0 II become the best option for you

The Sony Cyber-Shot DSC-RXO II Digital Camera looks like an action camera. The small size and the rugged build make the small flip-out screen 4K camera appear perfect to mount to innumerable moving vehicles. High Frame Rates (HFR) like 1000fps definitely builds a recipe for a life of action for the little RX0 II. Hidden beneath the Water, Dust, Shock, and Crushproof body of the RX0 II is a 4K Vlog camera perfect for the traveler and social media savvy video creator.

It is hard to not compare cameras. One does this well, and the other does that well. Make no mistake, one cannot help but compare the Sony RX0 II to a GoPro or even the nearly announced DJI Osmo Action. The three cameras are practically the same size, weight, and both shoot 4K. The GoPro and DJI are straight up action cameras built to succeed in the world of the extreme. Originally, built to mount onto a surfboard, the GoPro does action camera so well the name “GoPro” has become more than a brand name but a label for any small-sized mountable camera. Just like Kleenex is to tissue paper, GoPro is to action cameras. All of this means a challenger like the Sony Cyber-Shot RX0 II must be better to carve a piece of the market for itself.

Here is the thing. All of these cameras have a Sony Sensor. Yep, the GoPro, the newly announced DJI Osmo Action, and of course the Sony RX0 II all sport Sony Sensors. One supposes, if I may, Sony may have saved the best sensor for themselves. It definitely reserved the largest sensor for themselves. Below you can see a short edit of some of the material I shot at the NFL Draft in Nashville as I covered the event as a news photographer. This is not a high-end shoot. This is just me hand-holding the camera with the shooting grip. What you may notice is the shallower depth of field the RXo II delivers.

The Speed Of The Sony RXO II

I have used my fair share of small cameras. Yet, I have not used an action camera that was so quick to deploy as the Sony RX0-II. In my review, I used the Sony RX0 II during my days as a News Photographer. In this world, speed is a must. You do not get all day to shoot interviews and your broll. You do not get a grip truck full of gear. It is just you, a reporter, and your story. Skillful news photographers combine speed and opportunity into an efficient story skill. Having a camera at the ready, like the RXo II, is a must to capture a moment quickly.

I took the Sony RX0 II and its VCT-SGR1 Shooting Grip and stuffed the two into my ThinkTank camera bag alongside my V-Mount batteries, audio equipment, and other small accessories I need often. I left the VCT-SGR1 Shooting Grip attached to the Sony RX0 II. When I needed a shot I just pulled out the camera, turned it on, and set up the tripod. All in, the process took me around 30 seconds if I include finding a shot into the equation. I loved how fast I could whip out the camera and start shooting.

Something to think about. The RX0 II, and any small black action camera, and a mini tripod in hand and held upright looks a little bit like a gun when seen from a distance. Just be self-aware.

As far as I know, the Tilt screen is unique to the Sony RX0 II. We need more flip-out tilt screens on small cameras. Why? One doesn’t just shoot at eye level with a camera this small. Then there is the smartphone viewer both the GoPro and the RX0 II can utilize. Personally, I am tired of needing my smartphone to control my gear. From RGB LED lights, gimbals, to cameras I just do not want to use my iPhone that often. The less I pull out my iPhone the more focus I can be when working a scene.

One of the features VLoggers my cherish is the RX0 II ability to flip the screen so they can view the screen as they hold and talk on camera. I found this to be a nice feature when I tested it. Being able to hand-hold a small camera and video oneself is nice if you are into that kind of thing. The only hit against the tilt screen on the RX0 II is the small size of the screen, which cannot be helped.

If you shooting with a Sony camera for your “A” Camera then the best match-to-match will be the Sony RX0 II. When paired with a PMW-400 ENG Camera the RXo II was a spot on color match in HD. For a news camera, the Sony PMW-400 is a little older but a good camera with accurate color rendition. In the image gallery below you can see how much I could pull back on the highlights. You have a little bit of room at the top of the waveform, but not much. Just like most cameras, if you peak a pixel it is gone.

Okay, I kind of wish this camera had an adjustable aperture. I get why Sony are using a fixed lens on the RX0 II, keeping the camera small for starters, but I just want a little adjustability. Just a little. What is the Silver lining? You don’t have to worry about setting your aperture. You can adjust the ISO quite a bit so the last variable for exposure is shutter speed. To get the shallow depth of focus the RX0 II’s 1-inch sensor can deliver means you must filter the lens with ND. Sony sells a Filter Adapter Kit featuring a 30.5mm diameter filter mount for ND and polarizers. I think on bright sunny you’ll be happy to have this accessory.

The 15.3 MP 1.0 Type Exmar RS CMOS Image Sensor delivers a wide ISO from 80-12800. How does it do in low-light? Pretty well. This is a Sony camera. Sony makes some of the best low-light cameras on the market. Some of that badass wizardry was going to end up in the small RX0 II package. What’s holding the little camera from doing a better job in low-light situations? The size of the camera means less processing power behind the sensor. I felt safe shooting with the camera at night with a very high-contrast scene. I think it could be safe to use the RX0 II in a city at night.

This camera sees less of the world than other Action Cameras because the RX0 II is less an action camera and more of something wholly different. The wide-angle ZEISS® Tessar T* 24-mm (35 mm format equivalent) F4 lens is wide enough but do not expect the super wide field of view a GoPro or DJI will deliver. If you must have a super wide lens then go with one of those cameras. If you need a camera able to deliver a shallower depth of field and, in my opinion, a more pleasing image then the RX0 II is a better option. 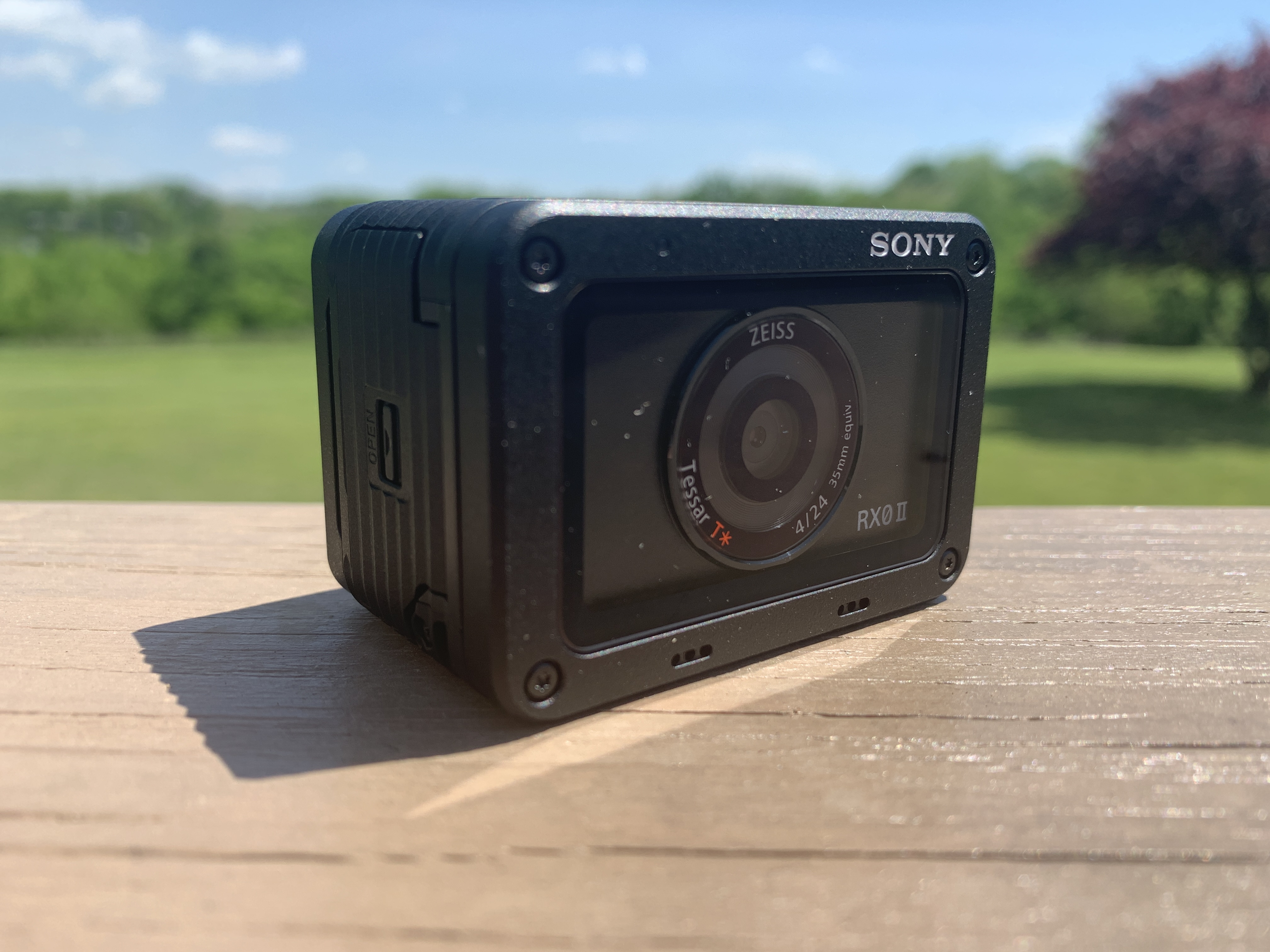 Which leads me to the manual focus feature on the Sony RX0 II. The camera’s foundation is a 1-inch sized sensor and it can deliver a shallower depth of field than other similar sized cameras. No focus ring, but a focus setting with a few options being close all the way to infinite. You set the focus, when in manual focus mode, by selecting one of the few pre-determined focus distances. When using the small LCD screen the focus can be a little tough to see well. I suggest turning on focus peaking for assistance. This is one of those settings I used pretty often and makes the image out of the RX0 II look better than any other Action Camera.

I think this is where the RX0 II shines best. When I tried out the camera to see how I may like the Vlogging situation I found the lens, the fixed aperture, the tilt screen, and the audio all come together and deliver. Even though the camera does really well here it still can’t fix my face. I’m behind the camera for a reason.

This little camera is also able to shoot raw photos with great autofocus. While I tested this feature I did not dive deep into it. For what little I saw, the raw photos were good. To have a feature like this is more of a convenience factor for shooters. It is a great feature when you find yourself in a certain situation and you are facing a great shot and need to capture it right now.

Good Lord the options are endless. Decision Dilemma is a real problem. Sony should at least try to simplify the menu architecture on their cameras. Take the time before a shoot to learn the RX0 II menu. There are enough options in this beefy little camera to cause panic in a shooter if you have to find a setting when the pressure of shooting schedule is growing. What I learned in my career is I tend to set a menu up and have the camera ready to go so I do not have to mess with much during my shoot. Thankfully the Sony RX0 II keeps your settings between use.

If you are looking for an Action Camera then the RX0 II may fit the role well but this camera gives shooters more to tinker with than a GoPro or DJI Osmo Action. The shallower depth of field, solid color and good codecs means the RX0 II can bring life to a shooter in unexpected ways. Make no mistake, this camera is more expensive and you get more out of it than similar sized alternatives. As a companion to a larger Sony camera, the RXo II played its role very well. Check out this NFL Draft News Story and see how I mixed in footage from the RX0 II with a Sony PMW-400 ENG camera.