The Canon XA40 is a small and mighty UHD camcorder yielding canon’s color as a weapon against single-lens camera hate in an s35mm and full-frame world. A surprise was my prevailing feeling after taking this little mighty wonder with me to the family farm in Rolla, North Dakota. 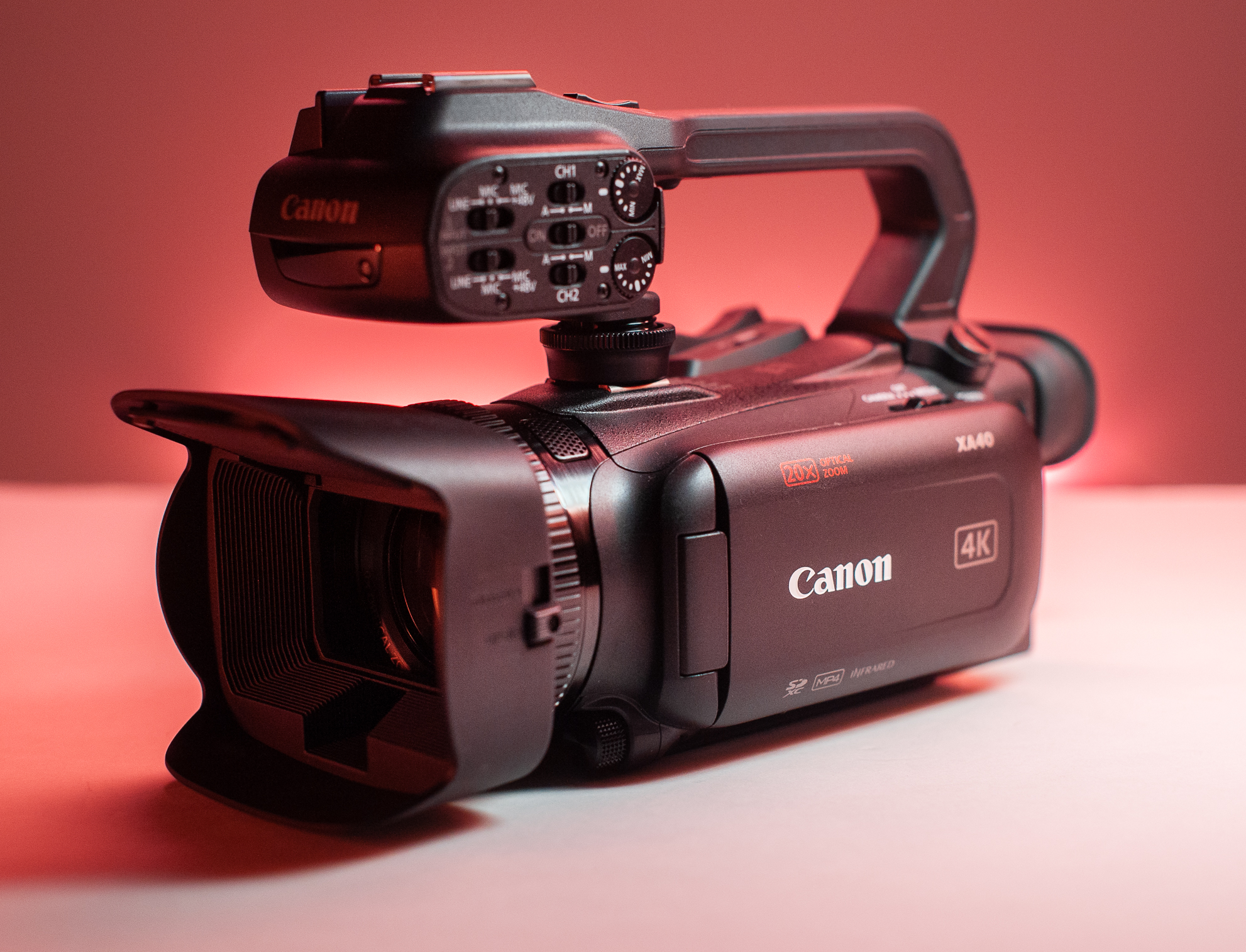 Traveling with a child and camera equipment means one must make compromises. What is needed to ease traveling with a toddler wins over cameras and lenses, right? After my wife made the suggestion to take the Canon XA40, I scoffed. I knew the mild summer beauty of the northern plains could deliver gorgeous imagery and I wanted to take all the gear I could carry. I was right and so was my wife, I had the right camera in my hands and the flight was easy on us as a family.

The color in the Canon XA40 is everything we know about the palette into which canon dips their pixels. Combine this acrylic like color saturation with a high plains sunset and you have a beautiful scene. In the video below, I exposed for the highest saturation of the yellows in the North Dakota Sunset.

Full silhouette was my expectation. When I pulled the UHD files (3840 x 2160) into Blackmagic Design’s DaVinci Resolve I was able to finesse the color and look even further to see how the Canon’s UHD h.264 files performed. To my surprise, the Canon XA40 UHD also held more shadow details than I witnessed while shooting on the camera’s LCD screen or EVF. This added shadow detail was a very nice little surprise. If I wanted, I could have pulled up the shadows a little more. I mean, who would not want more shadow information, right?

The highlight and the smoothness from a high value to peaked pixel were smoother when I protected my highlights a touch than I expected a single-lens camcorder to deliver. I am more used to a harsh edge between 100% peaked pixels and the rest of the image, which I experienced when shooting out the windshield of a Chevy Pickup. In the sunset on the family North Dakota farm, the sun did peek through and render those pixels hot white but in the overall scene, those pixels felt as if they belonged in the overall scene.

In Resolve, I discovered what was recorded in-camera was not the whole image. Pulling back highlights and /or shadows nearly a 1/4 to 1/2 stop each way will be a nice little bonus for those editors who may need to match the Canon XA40 to other cameras.

Sunsets aside, bright harsh daylight can be a good test of a camera’s dynamic range and overall image it can deliver. This soybean field footage was captured at 3 pm on a sunny day. I used a cheap polarizer to control the sheen from the soybean plants. To me, greenery can respond similarly to the skin when one uses a polarizing. Leaves can reflect a large amount of light from all angles and a polarizer is a great way to stave off glare and give you a better image.  I think here we can see the sharp UHD footage well. The details in the leaves and soybeans are good. The sea of green soybeans waving in the winds and the camera still holds the detail well. 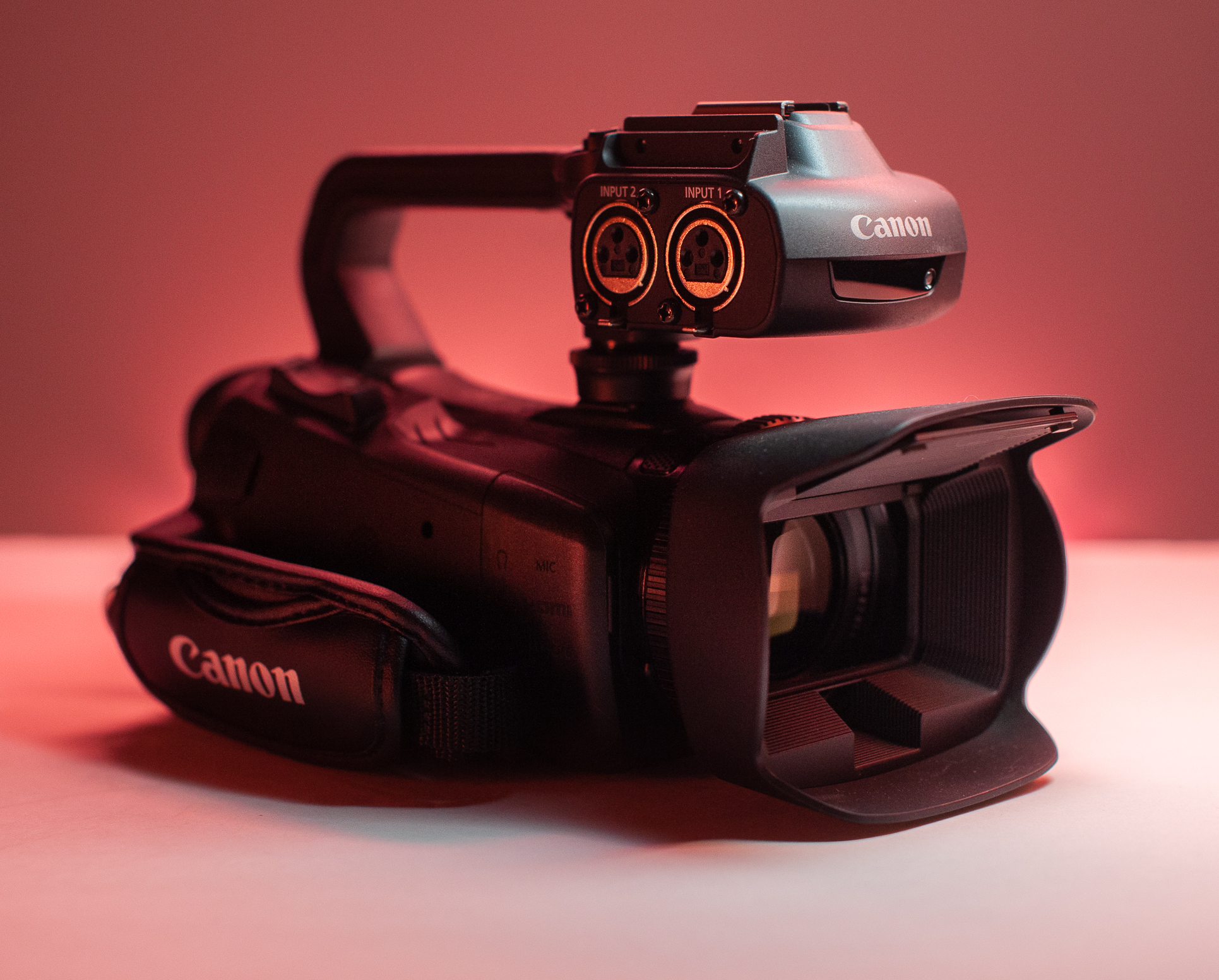 This camera feels like it was meant to be on auto. Auto everything. Auto Focus, Auto Exposure, and Auto White Balance you name the setting and the Canon XA40 can go auto with that setting. As a professional shooter, I tend to steer away from auto settings. Deciding to forego the auto nature of the Canon XA40 caused me to stumbled toward a better understanding of this little UHD camcorder.

The exposure and how one sets the aperture or neutral density is just one example which I detail below.

This camera does not have ISO settings it has Gain settings instead which are very similar. The lower this camera’s Gain is, very much like the lower the ISO on other cameras, the less noise found in the image. If you, like me, found yourself facing a bright sun then you will need to dive deep into the menu on the XA-40 to turn on the Neutral Density. Then when you want to set your aperture or iris and the neutral density will not be separately selectable. The neutral density comes on when adjusting in the iris. You can see in the detail photo of the Canon XA40 LCD Screen below that the ND 1/8 shows up around F4.0. Users cannot select a neutral density strength and then set the aperture. The ND and IRIS are ganged together. This was a little bothersome to me at first. I am used to choosing my aperture and neutral density separately so I may best choose what is right for the scene. After a bit, I got used to this feature. 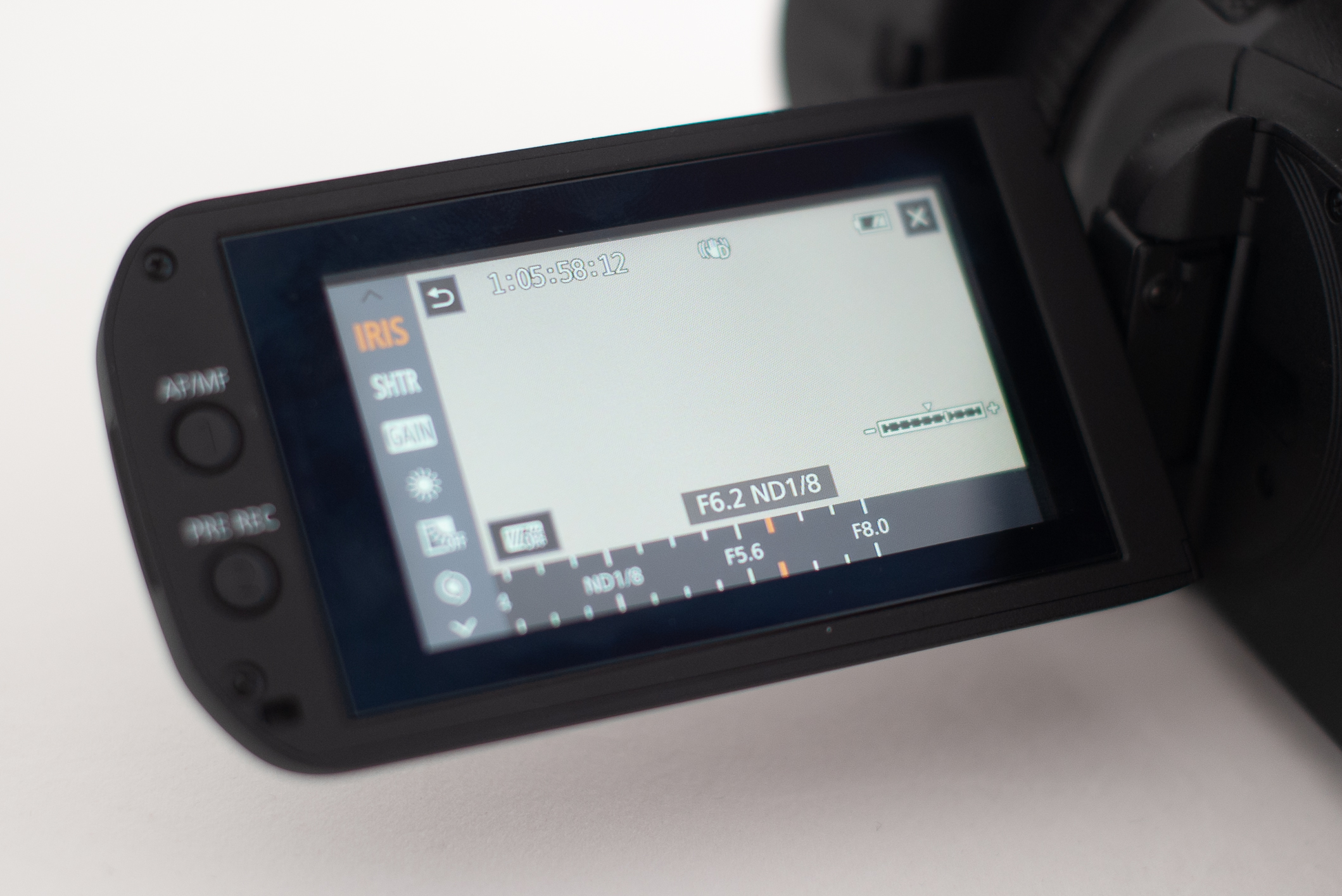 How did I use the camera’s gain setting? I nearly always shot with the camera’s gain setting on the lowest setting. My shooting situations were on a North Dakota Farm in the Summer. There was plenty of bright sunlight to go around, but I did test the Canon XA40 in low-light situations and I even shot a color chart noise test which you can see below. I found about halfway up the gain settings on the Canon XA40 was a comfortable place for me, but the higher half I found too noisy for my needs. I also found blue or a blue-ish green present in the shadows as the gain was set to the highest setting. I tried to match these noise examples to match. The highest setting took a little bit more correction and I still do not think it matches perfectly.

I have a particular interest into how the HD at 35 Mb/s looked because many Television Stations across the country shoot a 35 Mb/s because they have not moved into the 10-bit 30P world higher productions inhabit. The camera can output 10-bit 1920 x 1080 via the mini-HDMI connection.

In a challenging lighting situation, in the cab of a Chevy Pickup Truck, the image at 35Mb/s did not fall apart. The HD even held an image after I tweaked the image in DaVinci Resolve. Then I tested the HD in 17 Mb/s where I found the image to be a touch softer but not much softer than the 35 Mb/s HD.

What is interesting to me is the sensor resolution on the Canon XA40. It is a beefy 5352 x 3950. That is 5.3K downsampled, I’m guessing here as I am not a camera engineer, to UHD. If you want to know why I feel like the UHD is sharp in this camera then look no further.

I shot a couple of interviews with the Canon XA40 while I was in North Dakota. Remember, I am not an audio guy. If it works then it usually works well enough for me. On the Canon XA40 adding an external wireless lavalier was easy to do. The sound levels were easy to adjust and the removable top handle, which houses the external audio controls, worked well. Sometimes simple and easy to use is exactly what we need. Actually, all the time, I’ll take simple and easy to use all the time.

From smoothing out a good amount of wind bounce to hand holding the camera while a Chevrolet Pick-up drives down a dirt road, I felt like the image stabilization was good. You can see in the last two videos, one above this text and one below, the in cab car driving shots are decently balanced. I mean, I am handholding the camera as the truck drives down a North Dakota dirt road.

All in I think the Canon XA40 is a solid single-lens camera. The strengths of this little camera are the sharp Ultra High Definition, how easy it is to use, and the image stabilization. I could see this camera being used on a documentary, in a news-gathering situation, by a producer on a number of tv news shoots or reality shows. The UHD is sharp and the SD Cards are not expensive. All of these features in a $1699.00 video camera. 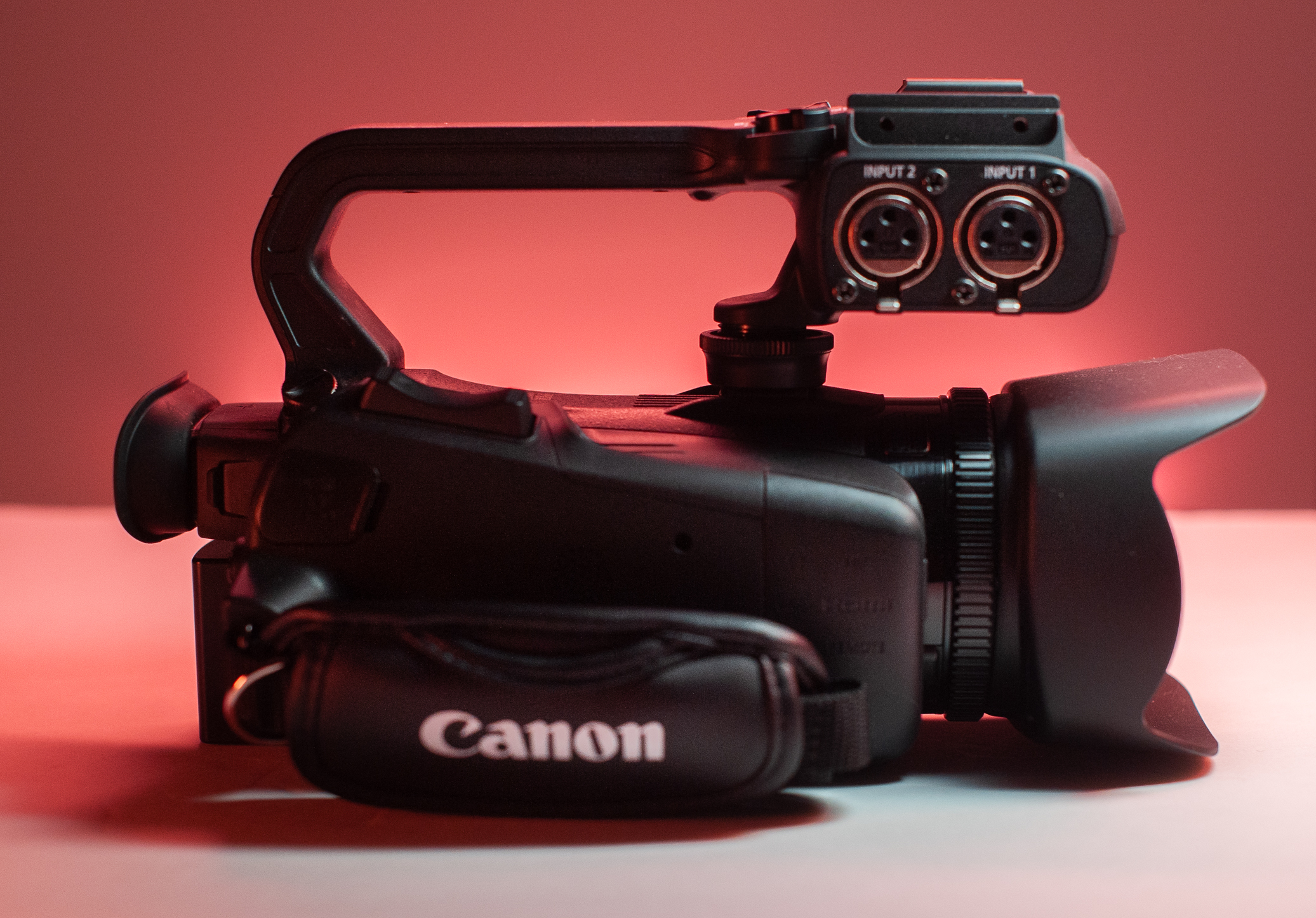