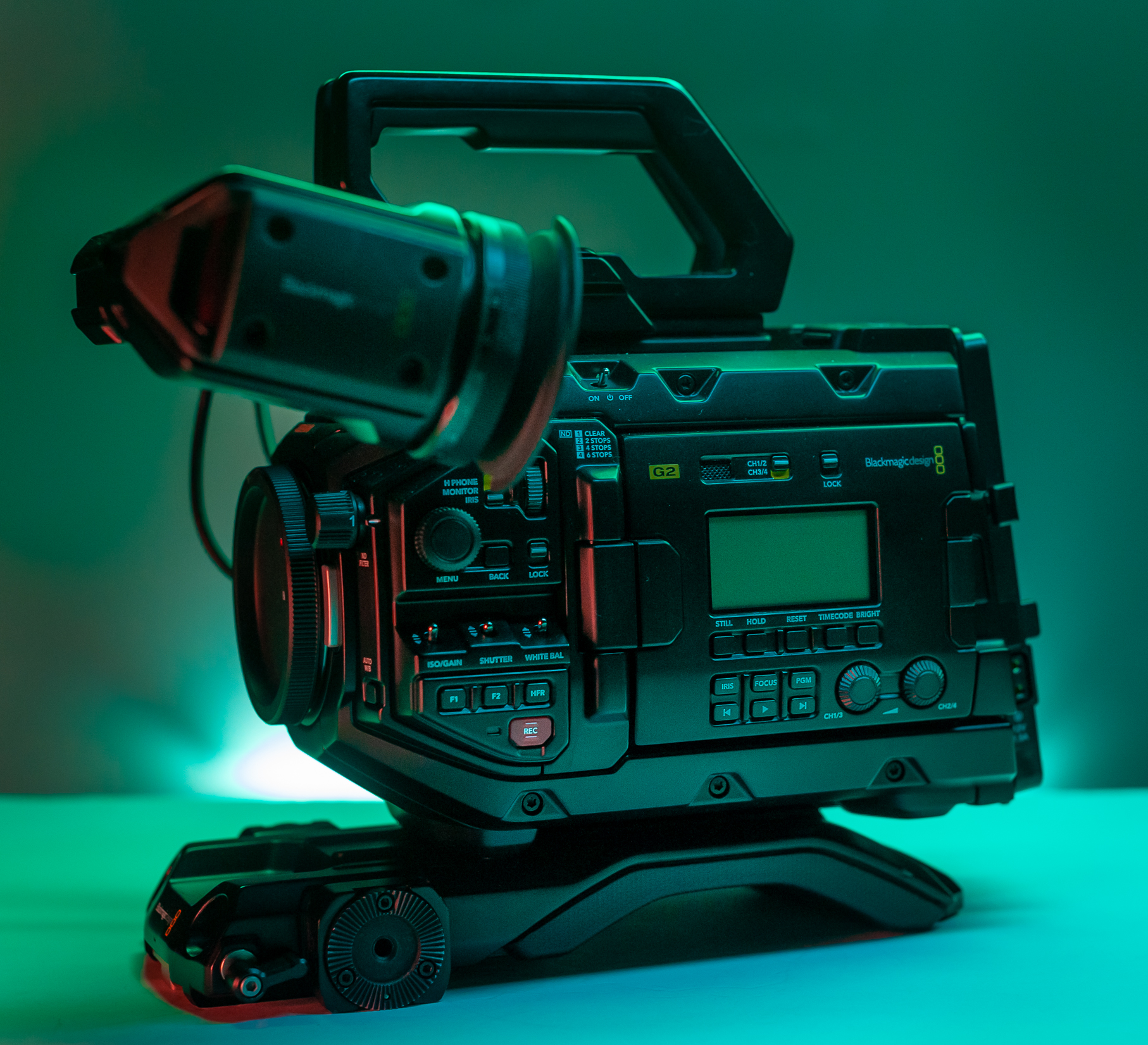 The difference is in the “under the hood” details behind the magnesium black camera body. The electronics and sensor readout is faster. So much faster Blackmagic Design was able to give the URSA Mini Pro G2 far more drool-worthy high frame rate options than the original camera. For example, in the HD cropped sensor mode the camera can record up to 300 frames per second when shooting Blackmagic RAW. For Blackmagic users, these higher frame rates are a nice addition and further extends the camera’s situational capability meaning owners are less likely to need to rent special equipment if needing something similar to HD at 300 fps. I mean this, if your camera can do what you are being asked you tend to go with what you got. More features means using your camera more, and getting a better ROI from your purchase.

The faster electronics and sensor readout mean the USRA Mini Pro G2 has less rolling shutter than the original G1. I doubt the camera can be called global and I did not test with a camera flash to see banding. Panning the camera quickly showed me I could be comfortable with a whip pan without  the more severe smeared image found in the original URSA Mini Pro. The image still smears a touch but the outcome of a quick whip pan is improved and, in my opinion, far less likely to be noticed by an audience. This is a good improvement over the URSA Mini pro G1 which had a little more jello effect when panning the camera quickly. There are times, especially lately, that I like to move a camera quickly. In short news stories the whip pan or tilt effect is very effective to enforce a good edit pace and story pacing. I’m hoping we start seeing rolling shutter disappear in years to come in all cameras.

During a network shoot, I decided the URSA Mini Pro G2 was to be my A camera. I had hoped the G2 would perform much better at higher isos than the original URSA Mini pro. And, it did perform better just not as well as I had hoped. Noise in the camera’s higher ISO is still in the image just not as much as it is in the G1.How about that fixed pattern noise? Practically, the Fixed Pattern Noise was not present until I shot at 2500 ISO with a cropped sensor in low-light and then the fix pattern noise made a slight appearance. This is a good improvement from the original URSA Mini Pro.

What I want to see is zero fixed pattern noise on higher ISOs when I crop in the sensor and shoot 1080 HD. Often during a news or documentary shoot, I will use the cropped sensor feature to extend a lens and reach further to get an important shot. Yes, I could just change lenses or move closer but in this case, I did not have a longer lens and the situation barred me from getting any closer. The cropped feature is a super quick fix when in a jam and I want to be confident in using it when racing against a setting sun and time. On a future camera, I want to see this feature on an assignable button. On my B4 camera, I can assign the feature and it is a lifesaver when shooting run-and-gun. It is an often-used feature for many who shoot in HD or 2K. Hell, even shooting in 6K on the pocket cinema camera 6K, and delivering 4K to a client, the crop feature is significant enough to look like a lens change.

In this example video below, near the end,  you can see noise on the darker areas of the image. This footage was for an investigative series so much of it needed to look dark and mysterious. Seeing just a little bit of noise in the Blackmagic EVF is not the easiest thing to see when under pressure. So run your tests and discover where you are comfortable shooting and just how much noise you are okay to deliver to a client. I shot this footage at 2000 ISO and 2500 ISO. Also, the police station footage was shot straight REC709 and you are looking at footage straight out of the camera. The 5600 Kelvin color temp seemed a little pale compared to some cameras but that is such an easy thing to change in camera. Could we get a vectroscope in camera on the LCD somewhere? Just asking.

One of the big new features is the availability of 1/3 ISO setting on the G2. Huge improvement than the original 200, 400, 800, 1600, and 3200 ISO settings. Being able to choose your ISO setting to match the aperture you want, without making a compromise one way or another, is a great addition.  It is these usability improvements that just make life easier as a shooter and give me confidence in my camera and my skills.

The larger high frame rate features have been the big headline since Blackmagic Design first announced the URSA Mini Pro G2. I had to test it. I just had too! Who wouldn’t want to test it? Luckily for me, I had a special visit from a friendly red-ringed hummingbird native to Tennessee. The visit was brief but long enough for me to grab the URSA Mini Pro G2 and start shooting through the window and screen. Yes, in the video below what you see is not fixed pattern noise. It is my window screen. The sunlight was hitting it directly. I did not have time to remove the screen.

The motion of the hummingbird, more how the camera captures the motion, is interesting to me. The image looks smooth and crisp. This is a strong improvement in the cropped image out of the G1. However, the window screen makes it a challenge to pixel peep this video. So, with the help of a little wine and my wife to pour it, I tested the 300 FPS to see how smooth it can look and I think the image look sharp and crisp. I am pleased to see 300 fps look this good.

The audio pre-amps on the Blackmagic Design URSA Mini Pro G2 sounded the same as the original URSA Mini Pro G1. There is not much new to report here between the two cameras.

The URSA Mini Pro has been the dynamic range king, or queen if you like, of the Blackmagic Design camera family. Boasting 15 stops of dynamic range and great color helps to make to give UMP cinematic chops. How does one test a real-world dynamic range? By going outside to see exactly what kind of image you get. Yes, charts help in a scientific way but a chart will not show you how a camera performs with people in the shot, how the camera handles real sunlight and shadow on a human face.

The URSA Mini Pro G2 is a great improvement over the original URSA Mini Pro. Would I go out and sell my generation 1 of the URSA Mini Pro to pick up a brand new G2? I am not so sure. When I had the opportunity to shoot in a multi-camera situation the G2 performed much better in comparison of the color to a client monitor alone. I definitely felt like the G2 had more features which put me at ease when shooting for a big client that I wish were in the original URSA Mini Pro. And, the G2 is just easier to use because of the added ISO settings and less noise in the image at higher ISOs. Make no mistake, Blackmagic Design improved an already good camera and any improvement is very much appreciated by me. Lastly, the URSA Mini Pro does not come with a handgrip so you will have to source your own and might I suggest Kinogrip.com.