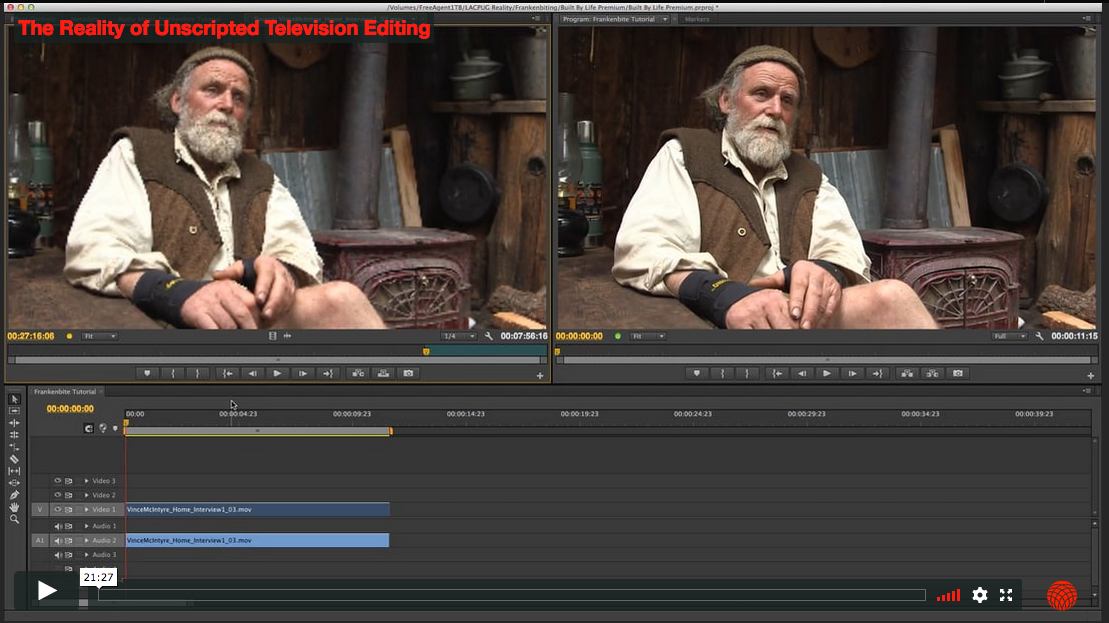 To watch the webinar that accompanies this article and talks through many of the topics laid out here in further detail, click here.

For all the editors who just landed their first reality show or for any assistant editors who are moving up to the edit chair, we’re going to get you up to speed on editing unscripted television. Along the way, you’ll discover many of the Tips and Tricks in the reality show editor’s toolbox.

A comedian once said, “Its tough to get laughs at a free show, but when guests pay a cover, they invest in their entertainment and want to laugh.” People want to feel smart and feel like their money was spent wisely, so they are more likely to laugh at things they invest in. With an active show like Modern Family, you sit down, face the TV and consume the show. You invest in that show. On the other hand, Reality TV is made for a scattered generation. A generation whose attention is split between a phone, a computer, gaming console and a magazine. Reality TV is passive background entertainment.

Because the viewer’s attention is divided, reality shows have to resort to tactics like edits every 3 seconds with occasional flashes sputtered in and a wall-to-wall music track with sharp beats. All this chaos hopefully grabs the viewer’s attention and turns it away from that phone. Have you ever found yourself watching a show about Ice Road Truckers, or Duck Hunters, when you don’t own a gun or drive a Peterbilt? It’s probably because of those flashy edits, but after after we’ve grabbed your attention, we need to keep it with interesting people and dazzling stories.

Even with great characters and compelling stories, viewers may still feel like “this show is dumb!” That perspective arises because reality shows repeat lots of information. They contain a “Previously On”, “Coming Up On” and “Next Time On” segments, because we never know when you’re going to look up from that phone.

We need to capture that divided attention and bring you back up to speed quickly.

Unfortunately, repetition can feel dumb. It means you’re telling the viewer something they may already know. To make matters worse, just before each commercial break there is an act out tease with a coming up on. These teases are often very flashy and contain the juiciest bits to get the viewer to look up for the commercials. Those are some of the limitations and charms of the genre though.

Before we go any further into Act Outs, let’s examine the differences between a traditional 2-hour move and a 1-hour television episode. A typical 2-hour movie follows a 3 act structure. The movie starts on a low and excitement builds to the break to Act 2 when our hero decides to take the journey. The journey now takes us to the midpoint where the hero has usually been knocked down again. The hero then rebuilds to the break into Act 3 when all hell breaks loose. The hero finally battles their way to a happy ending.

A typical one hour show follows a 6 act structure. Each act builds to a Act Out with a tease or a cliffhanger, and finally to an overall cliffhanger at the end of the show, enticing you to watch the next episode. In comparing these, a 2-hour movie peaks your excitement and spikes your dopamine levels 4 times. On the other hand, a TV show will give you 12 dopamine spikes in the same 2-hour span.

In addition to that, our TV heroes will be at various stages of achieving their goals. As one hero succeeds another is at their midpoint. So there are even more dopamine spikes between those breaks. Have you ever balked at the 2-hour commitment to watch a movie only to find yourself binge watching 6 hours of television? Act Outs are the reason why.

The Act Break or act out is the most important element of any television program. It is closely related to the Cliffhanger. However, the Cliffhanger is designed to keep the audience intrigued to come back after months of hiatus. An Act Out needs to be tantalizing enough to keep eyeballs glued to the screen for the next few minutes. The Act Out is not to keep you interested in the show. Instead, it’s there to grab your attention to watch the commercials. After a great season finale cliffhanger, the program gets shut off, but a great Act Out keeps the viewer engaged and an engaged viewer watches the advertisements. This is how we pay the bills.

Act Outs are often not real story points. These teaseable moments are sometimes faked in the edit. They’re often about using exciting music to build tension, flashier cuts, and tastier sound bites to keep you interested. Scripted television has the luxury of simply writing these act breaks into the story as a cliffhanger or emotional whammy. The writer writes something dramatic for a character to do and it’s done. Unscripted or reality TV largely relies on what is shot in the field. These real events can often result in a restructure of the show. Take the famous table flipping incident from the Real Housewives. That scene changed the structure of the show. It became the focus and the dramatic break. Sometimes you may be watching a show like Survivor or Amazing Race and the opening of the act might be dragging. This is usually because they are padding to push the dramatic scene to the end of the act.

One of the most important tools in a reality editor toolbox is frankenbiting. Frankenbiting at its extreme is taking pieces of a person’s words and reassembling them to say something new. Often, this is harmless and is just to deliver an explanation that wasn’t caught properly on set. Sometimes though, it can be used for something much different.

A cooking show once needed a contestant to say “GE Monogram oven”, but he never said it, so they pulled a “gee” sound from when he said “squeegee”, then they pulled “mono” form when he was talking about Mr. Peanut and said “monocle” as well as “gram” from when he said “program”. At some point he said “oven”, so that was easy enough to pull and make it sound like he actually said “GE Monogram oven”, even though he never did.

At its most extreme, sometimes we use frankenbiting to change an entire story. Typically though frankenbiting is just used to fix problems. Frankenbiting techniques are employed to remove the pauses, to condense statements, to make them quicker, cleaner and more concise.

People claim reality television isn’t real, but we’ve all heard Donald Trump’s famous bus conversation. That was real. People say real unprompted crazy stuff all on their own. Talent will often say stuff that we can’t use because we want another season of the show. We don’t want them to spiral into obscurity. That Trump bus statement wasn’t originally used in the show, it only came out later when the presidency was at stake.

However, on a competition show like The Apprentice, you can paint someone terribly if they’re only going to be on that one season then gone. Or so we thought with Omarosa? But if you’re watching something like The Kardashians, I guarantee you there is a lot of stuff that is left on the cutting room floor, because people want another season of the show.

The template for a typical unscripted show

The two common types of Reality Shows are the stand-alone show and the serial. The stand-alone show has evergreen content and can be played in any order. Shows like Judge Judy, Shark Tank, Fixer Upper, Pawn Stars, House Hunters and even Duck Dynasty are stand-alone shows. The serial, on the other hand, has an overall season story arc where episodes must be played consecutively. Examples are American Idol, Hell’s Kitchen, The Real World, The Bachelor, Survivor, and The Real Housewives.

Acts 2 through 6 of a show usually have the same structure. Each scene starts with Generic BROLL, like a town/city followed by location specific BROLL. Next, we cut to reality vérité footage. Then we go into the interview. Usually, before cutting to the interview, we see a reaction shot of the interviewee. This connects the interview and gives the illusion that the interview is reflective thought. These scenes are then compiled into a 6-9 minute chunk with an Act Out tagged at the end to make up Acts 2-6.

Music and BROLL are the heart of reality. Music is used to make all the elements, vérité, interview and BROLL feel like one cohesive piece. BROLL serves a few purposes. It can cover flaws, highlight elements, transition from day to night, become a travel montage and just glitz things up.

Below is a glossary of Reality Show Terms to ensure you’ll sound like a professional in no time.

NextOn = Next Time On

Act Out = The climax before the break.

Act In = The first scene after the break.

Reset, ReRack, ReCap = A quick few scenes sometimes with Voice Over to bring the viewer back up to speed.

Reality Vérité = The shots of what happened in reality.

Commercial Break = The Sugar Daddy who pays our bills.

Voice Over, VO = The narrator or voice of god that helps us convey lots of information in the shortest amount of time.

BROLL = Shots taken with the secondary “B” cam which usually don’t contain the main characters.

Generic BROLL = Evergreen B-roll shots that can be used anywhere.

Location BROLL = Identifiable characteristics of a town or an exterior shot of a building.

EG = Ever Green means this content is always green grass it can grow anywhere.

INTV = Interview, usually sit down after the Reality Vérité.

OTF = On The Fly interview usually shot on location off to the side of Reality Vérité.

ITM = In The Moment interview, usually during Reality Vérité where a character explains what is happening in that moment. The character often breaks the fourth wall and speaks directly to the camera in scene.

FCv1 = Final Cut version 1 is the first Final Cut of many.

To watch the webinar that accompanies this article and talks through many of the topics laid out here in further detail, click here.