Adobe Photoshop is synonymous with creativity, which is why it made perfect sense to celebrate its 25th anniversary with a standout commercial of exceptional artistry. Goodby Silverstein & Partners (GS&P) produced and Rock Paper Scissors edited the fantastic spot—an animated montage of the work of artists from all over the world. It aired during the 2015 Oscars and has been watched nearly 1.9 million times on YouTube. The commercial won two AICP awards, a D&AD Graphite Pencil, two Cannes Cyber Lions, and continues to receive rave reviews from creative professionals and dreamers worldwide.

Adobe Photoshop is synonymous with creativity, which is why it made perfect sense to celebrate its 25th anniversary with a standout commercial of exceptional artistry. Goodby Silverstein & Partners (GS&P) produced and Rock Paper Scissors edited the fantastic spot—an animated montage of the work of artists from all over the world. It aired during the 2015 Oscars and has been watched nearly 1.9 million times on YouTube. The commercial won two AICP awards, a D&AD Graphite Pencil, two Cannes Cyber Lions, and continues to receive rave reviews from creative professionals and dreamers worldwide. 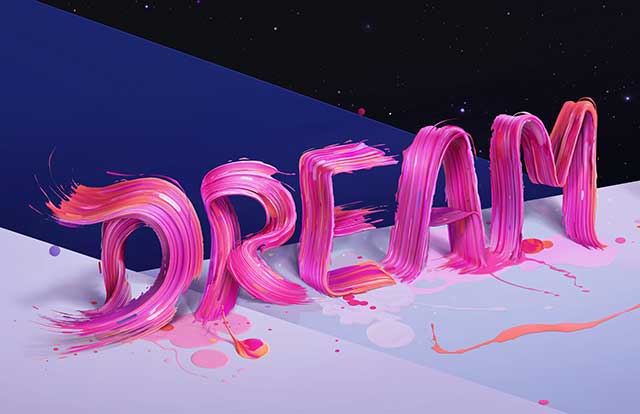 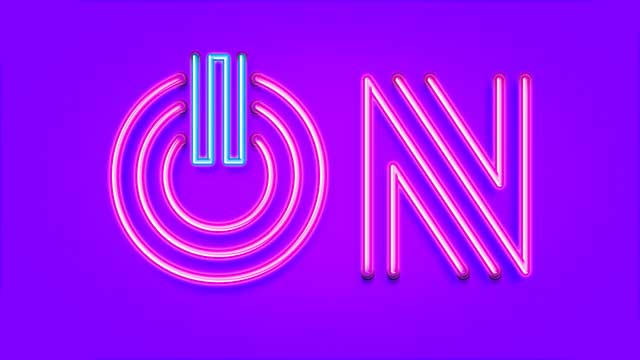 Adobe: Why did Adobe want to make a 25th anniversary spot for Photoshop?
Amado: Adobe Photoshop is among our best-loved brands, and it has become an integral part of peoples’ daily lives. Photoshop touches everything from advertising and automotive designs to photos, mobile apps, works of art, films, and websites, and everything in between. So 25 years is an anniversary worth celebrating.

Photoshop is more vibrant and relevant today than it’s ever been in its history, which you can’t say for many 25 year old pieces of software. Its power, adoption, and influence on how people create and on society at large are bigger than ever and only growing as the world adopts new technologies such as mobile and 3D printing.

Adobe: Alex, what were some of the initial challenges with 25 Years of Photoshop?
Amado: When we came up with the idea and bought the media slot for the Oscars, we didn’t know what we were going to create and yet we did know that we had less than three weeks to complete the commercial. We knew we’d be working around the clock, and it had to be an “all hands on deck” project. 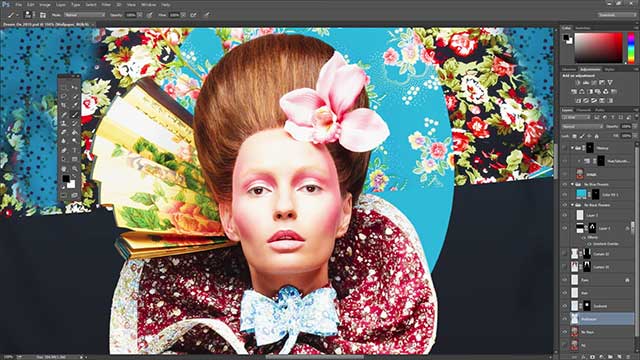 Adobe: Once everyone started brainstorming, what were the first ideas that surfaced?
Amado: Our ad agency, GS&P, came up with the awesome idea to create a beautiful montage of great, modern designs created in Photoshop. We solicited submissions from artists all over the world via Behance, and they sent .psd files to use in the video. We were launching with the Oscars, so we wanted film represented too. Working with FOX, Dreamworks Animation, and Warner Brothers, we secured permission to use a few key images from iconic movies that used Photoshop such as Avatar, Shrek, How to Train Your Dragon, The Hobbit, and Gone Girl.

We set the montage to Aerosmith’s Dream On. It’s the perfect song for this spot, because “Dream On” is a challenge to creatives everywhere. The idea of every image being touched and modified in some way came from GS&P. Correcting, selecting, modifying, and touching up each image in amazing, tiny, intricate ways made it a Photoshop commercial as opposed to just a beautiful slideshow set to music. We also wove in several Photoshop “insider” jokes including using the Eyedropper tool to add a tear, and having the Measurement tool tips appear as the logo comes onscreen at the end.

Adobe: Tod and Timothy, how did you get permission to use all of the artist’s images?
Puckett: Jim King, our print and graphics producer at GS&P, pored over Adobe Behance and asked artists around the world if we could use their work. Once we confirmed usage rights, it was time to think about how to build the piece in a really intriguing way. 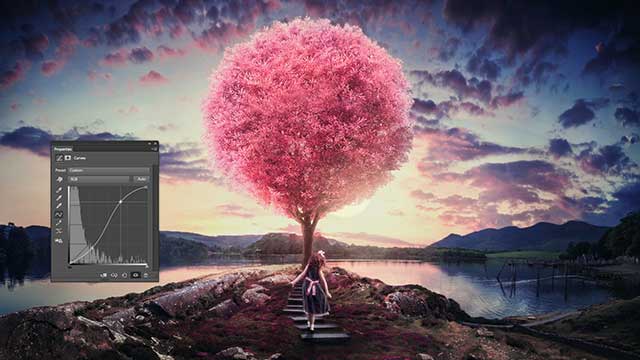 Adobe: What were some of the challenges in telling the story?
Puckett: From the beginning, we wanted the commercial to captivate audiences and glorify Photoshop. The short video gets people on board in an emotional way, but there was a lot of trial and error.

Once we landed on the song, our first task was to figure out how to make a nice clean edit and tell a compelling story in 60 seconds. Our first idea was to start with an animation of the Photoshop interface, followed by the glory images, and then revisit the interface again at the end. But this approach didn’t tell a story. Then we realized: the story is the interface. Once we switched to showcasing everything within the context of the interface and stopped trying to tie every image to the words of the song, things clicked. That’s when we really started having fun and finessing where we used which images. 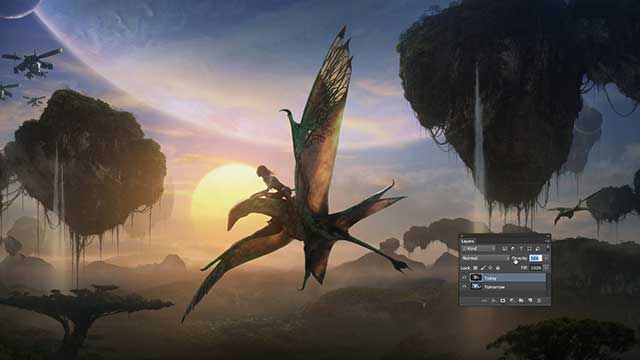 Adobe: How did the collaboration work?
Plain: We handed off layered .psd files to Rock Paper Scissors, where our editor Grant brought them into Adobe Premiere Pro CC to build out rough ideas for image placement and create a proof of concept for each section. Then we gave timing directions to the GS&P motion graphics team, and they used Photoshop and After Effects to build the final animations.

Adobe: Grant, tell us about your role on the project.
Surmi: When they brought me on, Adobe and GS&P had already sourced much of the artwork, chosen the song Dream On, and decided it was going to have a music video feel. At first, we had huge printouts of the artwork on boards around the room and just used flat images to block out rudimentary moves and zooms in the edit. As the process progressed, artwork was constantly evolving and changing for various reasons. We eventually got the actual .PSD files from artists, isolated the layers, added in paint strokes, and so on. It was total creative freedom, which was fun. 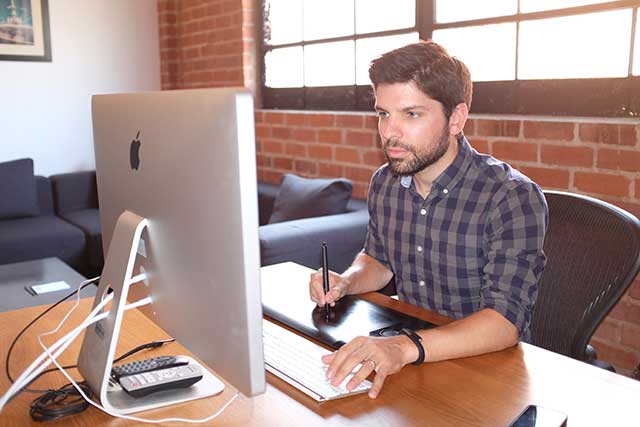 The collaboration really flowed, and the integration among Premiere Pro, After Effects, and Photoshop, helped tremendously. For instance, I easily accessed the .PSD files with all the layers and manipulated them in Premiere Pro. That part was crucial in my role. The graphics team at GS&P was great. Once we got the edit in place, they refined the animations in After Effects.

I have to stress that this was a collaborative effort. Rich Silverstein, Co-Chairman of GS&P, was a big part of the creative process. Everyone had a role and an influence on the final product. It was exciting to have so much energy and commitment to making the project fantastic.

Adobe: What was it like working in Adobe Premiere Pro CC?
Surmi: Because of the tight deadline for the project, I iterated on ideas quickly, and Premiere Pro made that possible. Premiere Pro is modern and fast, and it works fluidly. For this project, the keyframing abilities were really handy, as were the Bezier curves. For instance, I roughed out the animation of the Photoshop interface shown in the very beginning right in Premiere Pro so it could be finalized in After Effects.

Adobe: Alex, what do you want people to take away from the commercial?
Amado: For 25 years, artists, creators, designers, photographers of all kinds have used Photoshop to bring their dreams to life through imagery, pixels, physical objects—you name it. We want to say to them: “Keep going, dream bigger, and we’ll help you make it happen.” Adobe is using the commercial in many places as a thought-starter, an eye-opener, and a story about innovation and tools that can help people realize their dreams. 25 Years of Photoshop is such a powerful celebration of creativity—and at the end of the day, that’s what Adobe is all about.