Seven days… I had the camera for exactly seven days.  Just seven days to take the little camera through the paces and see what are the strengths/weaknesses and how it would fit in a broadcaster’s tool kit.   I will say, shooting with a brand new camera is always a bit of a discovery process for any cameraman and these seven days proved to be rewarding.  To help you with your tests/discovery process with the Blackmagic Pocket Cinema Camera you’ll find both color graded and ungraded videos that are downloadable.  This way you can see the footage and do your own color grade. 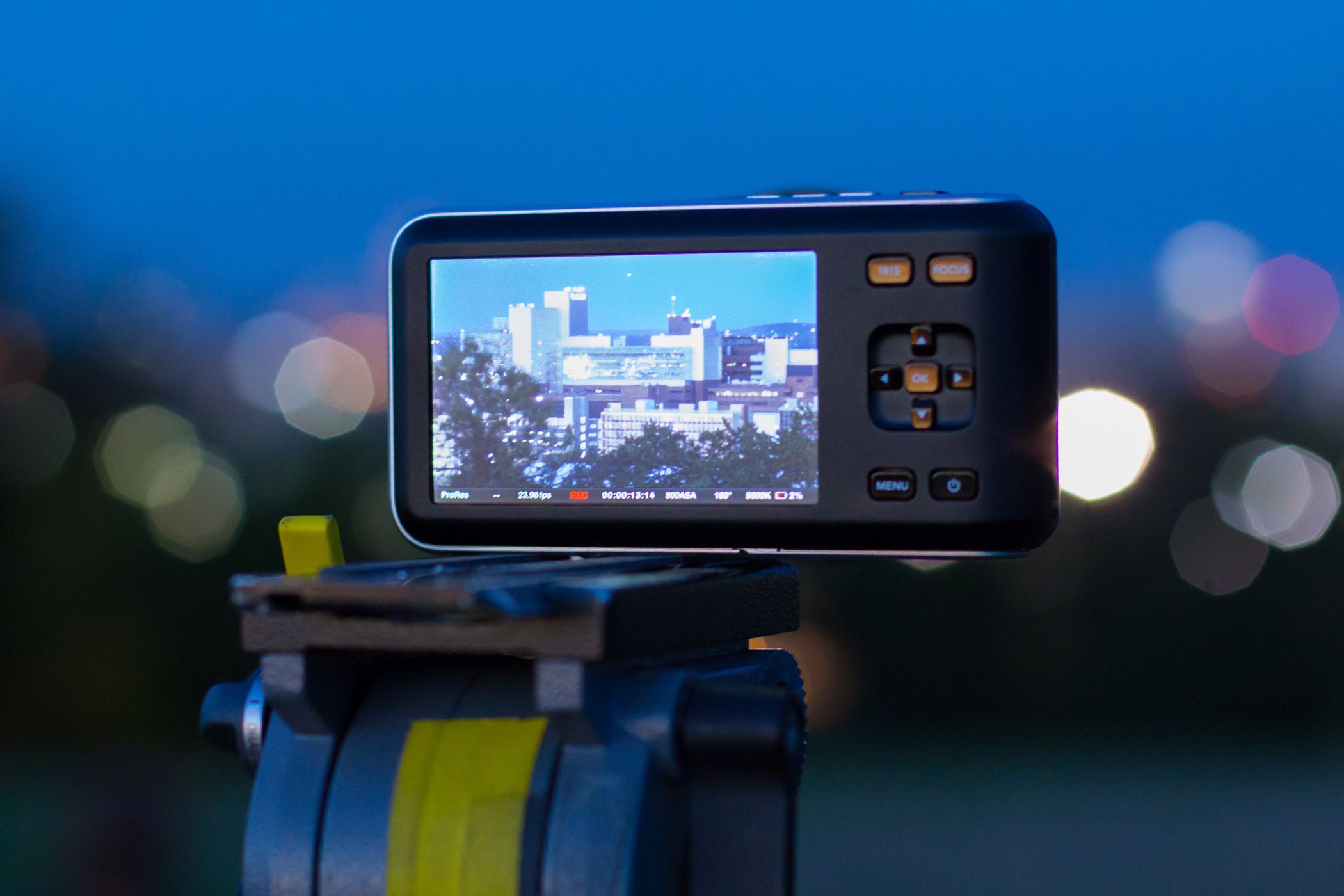 This camera is small… I mean really small.  The other camera used to describe the size are the iPhone.  This diminutive size is an absolute asset, which means it’ll fit in any cameraman’s run bag.  Remember, it’s not the size that counts, but the capability of the sensor.  The Blackmagic Pocket Cinema Camera has the same sensor as its big brother, the Blackmagic Cinema Camera, just sized to Super 16mm, and instead of the 2.5K for the BMCC the Pocket Camera shoots 1080.  It’s nice to have a smaller sensor at times, and it’s a format I learned on when I was in film school.  I even shot a music video on Super 16.  Personally, I think it’s cool to have choices when it comes to sensor size.  Everything doesn’t necessarily need to be shot with a Super 35mm sized sensor, but sensor size is not really what I did with the camera for seven days… Nope I shot with it, too.

This also turned out to be the most rewarding test too.  The first full night I had the camera I wrangled together a few people and decided to shoot something similar to a commercial/promo spot.  I wanted to shoot at night… at 1600 ISO… I wanted to see what this camera could do.  In stepped Matt Barker from Blackhawk Cinema (http://blackhawkcinema.com ).  Since Matt and I saw the Pocket Camera at NAB last year we immediately saw the possibilities for flying and stabilizing it. (full disclosure moment… Matt saw the potential ahead of me… I was busy drooling over the 4K Production Camera)  Since then, he’s been building, finessing,and tech-ing out his homemade Movi… he calls it the “Mocki”, and so will I. 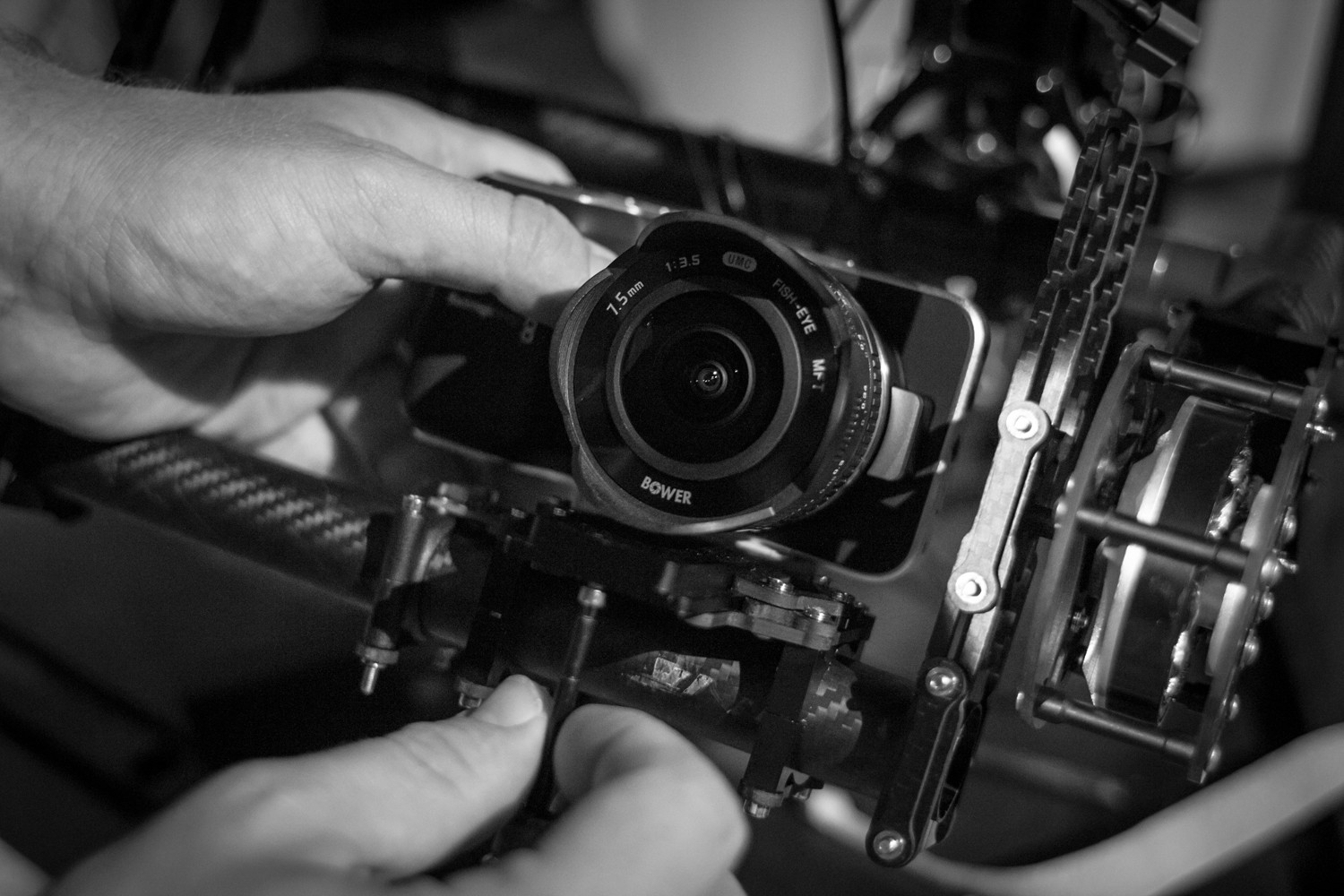 This is how the first test went down.  Matt brought along his “Mocki,” and I pulled together two amateur actors, received no permit, and did not get any location agreements.  If we were asked what we were doing Matt suggested we say “Makin’ a Mayonnaise Commercial.”  Mind you, it was 11pm on a weeknight.  This is a small sample of what we shot for our “Mayonnaise” Commercial:

All the shots were shot at 1600 ISO (except the very first shot, which was shot at 800 ISO), 23.98 FPS, with a Bower/Rokinon 7.5mm lens.  We only shot with available light.  Hindsight, I think we should have brought a battery powered china ball for fill. For the cycling shots we sat on the bed of a pickup and hand-held the “mocki”, which flew the BMPCC like a charm.

This is what the BMPCC is meant to do.  It is light, it is small, It is capable of creating really nice images, which means this camera begs to fly or be stabilized.  Hands down, I was blown away with how easy it was to capture cool night shots with the Pocket Camera, and how easy it was to use on a small gimbol.  It seems to me, this camera was meant to be mounted.  Its size definitely lends itself to mounting the camera on anything where the BMCC is too heavy or would take too long to mount. The screen was easy to use at night, and the focus assist helped us immensely as we planned out our shots.  Thankfully absent: black dots in lights. 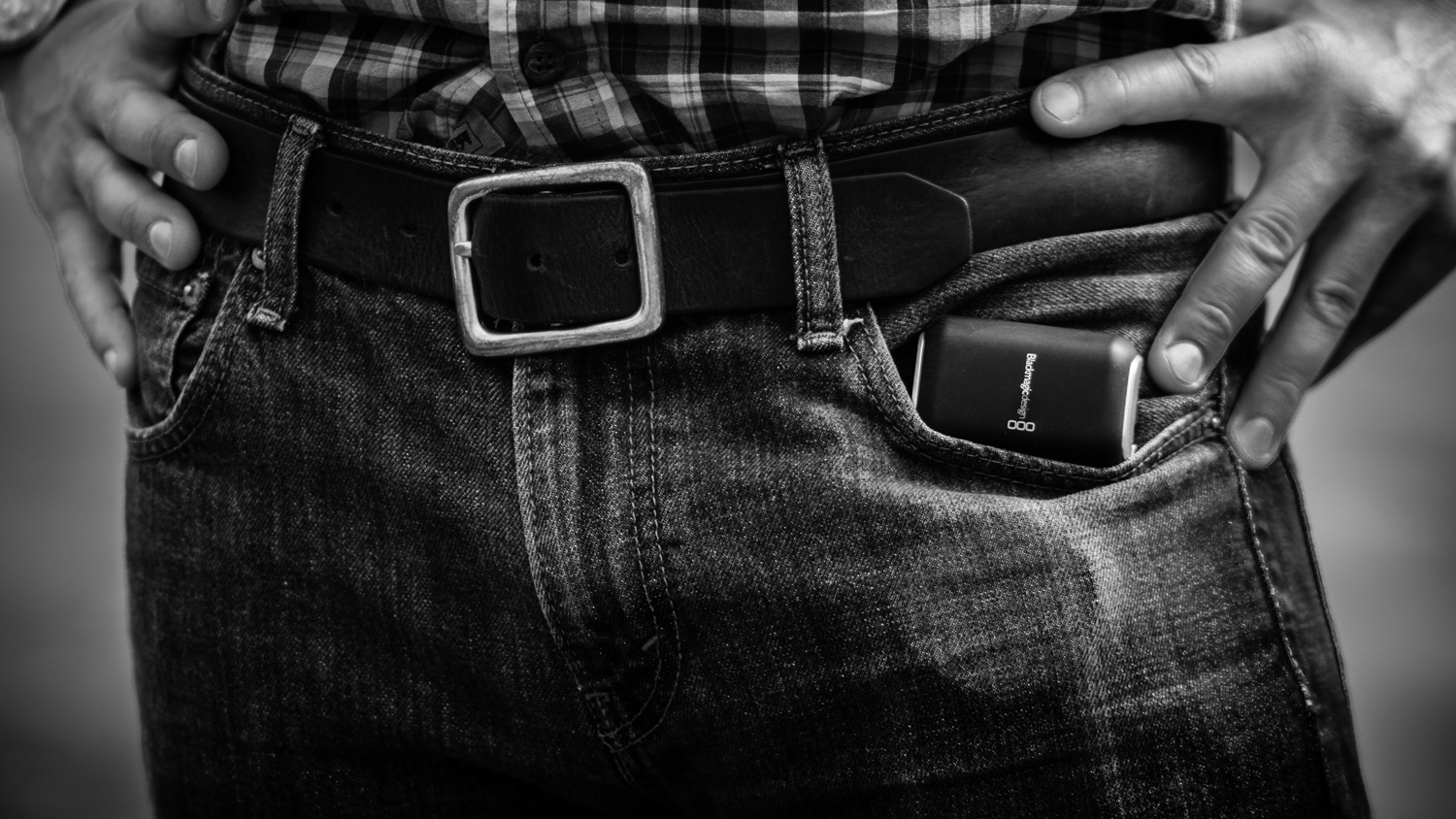 Is this camera really a pocket camera?  Can I sneak it into a place where cameras are not usually welcome?  The test was to go to a concert at the Ryman Auditorium, capture some footage, and not be asked to leave.  Typically, the Ryman does not allow cameras with changeable lenses like a DSLR without permission from the PR people.  So I shoved the camera, which had no lens, into my jeans front pocket and put my lens in my coat pocket.

I pulled out the camera at the start of the main act and started shooting.  I was not asked to stop shooting video nor asked to leave.  Life stealing shots is easier when the camera looks like a smart phone when seen from behind… it’s definitely a similar size.  Even the screen is a similar size to some smart phone screens.  Plus, it was a concert and everyone had their phones out.  So, success… however I don’t think the security people at the Ryman are going to stop anyone from shooting unless they pull out a DSLR with a lens on it.

Is this a real-world investigative journalist type of test… of course not.  If I was shooting pieces for our news, or a network, this camera would be with me all the time.  It’s incredibly easy to have with you wherever you go, but you’re not going to be very sneaky if you have anything other than a smaller lens.  The good: you won’t be stopped at the threshold of restricted areas because you can put the camera pieces in you coat pocket and pull them out when needed.  It looks like you’re taking an iPhone picture.  I showed this camera to our investigative photographer at the station and he was definitely interested in it’s size and it’s capabilities.  In news, if you pull out the big camera everyone comes over to see what you’re doing, with the BMPCC I believe you will be able to get your shots and no one will take any notice.  That can make all the difference when you’re on a deadline or covering a sensitive subject.

This is more of a traditional type of camera test.  I went out to enjoy the day and shoot a nice little piece.  This was a test with the least surprises.  If you used a BMCC then you’ll find many of the similar strengths and weakness in both cameras. Below, you’ll find what I shot using a Canon EF adapter with these lenses: Tokina 11-16mm, and Canon 28mm, 50mm, 85mm. 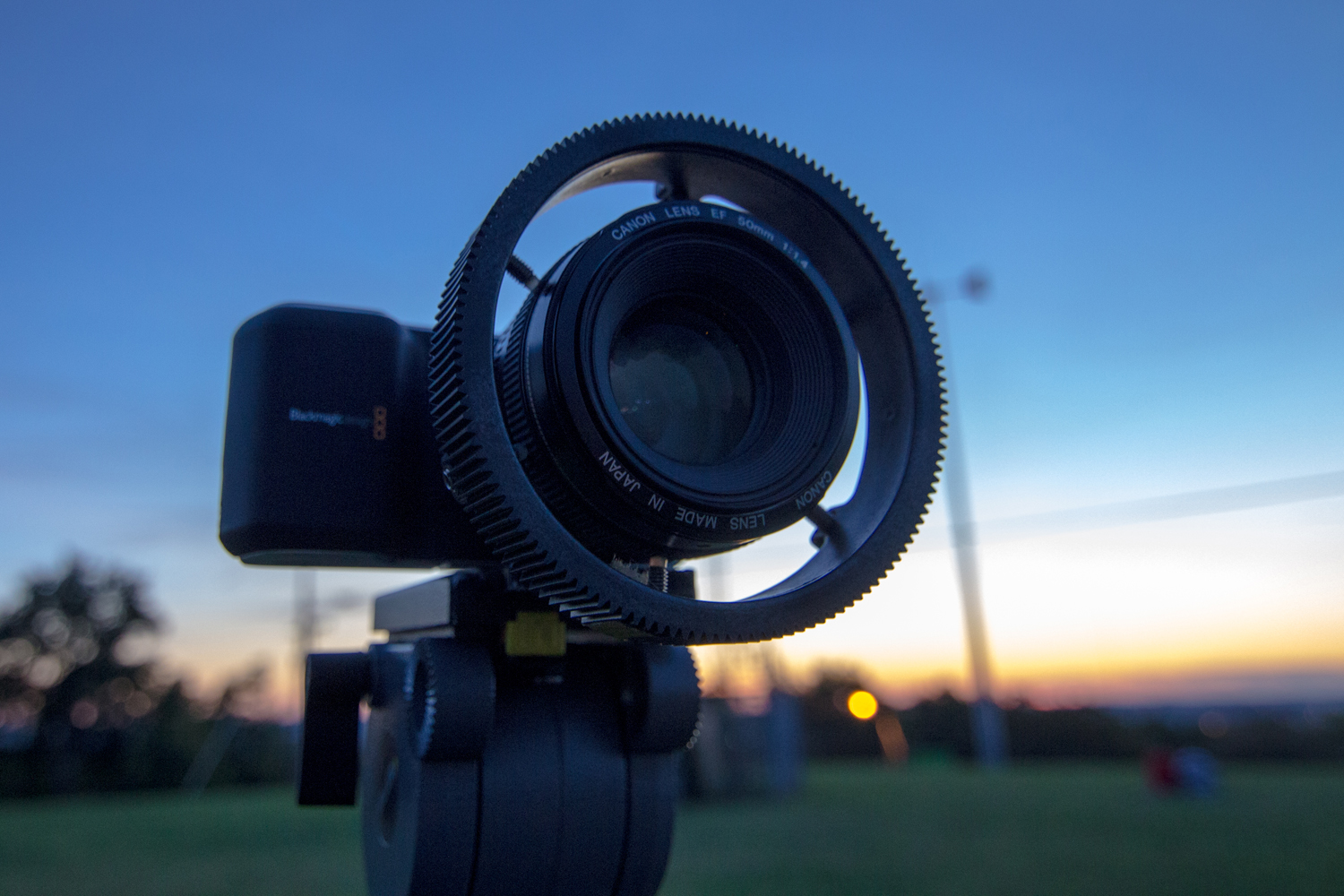 No camera is perfect.  No camera will do everything you need it to do.  This camera is a great camera, and I want you to be informed before you make a decision.  Audio: It has an on-camera microphone and it isn’t great.  I mean, what do you expect… it’s tiny.  Audio input?  I find it hard to imagine myself using this camera to record audio.  It can be done and it can sound good you just need the adapters to make it work.  If you recorded sound with your DSLR then you likely have everything you need to make it work for the BMPCC.   If I was a photojournalist and I needed the option to shoot a stand-up with this camera… I could do it.

The screen is definitely an improvement from the reflective one on the BMCC, but it still is a little difficult to use in bright daylight.  A small loupe solves this problem quickly and will help stabilize the camera as you hand hold it.  By the way, this camera wants to be hand-held, which is awesome, but you may want to invest in IS lenses or you’ll see hand-shake in your shots.  I want raw!  I want Avid’s DNxHD.  DNxHD is easy to use in my current broadcast environment because we don’t update our avid newscutters with every available update… like a lot of stations.  So using ProRes is not an option on a few of our editors.  Stepping into a menu to change the ISO… there has to be another way.  Maybe assign the up/down buttons on the back when not used for the menu?  Maybe?  Possibly?

This is a fantastic little camera that packs a punch.  If I was a photojournalist or someone who was out running and gunning a ton.. then this camera would be in my pocket.  ACTUALLY, I am one of these types and I’ll very likely buy one soon!  It may not be my “A” camera but will definitely be my “B” camera.  The BMPCC will make for a great second camera on shoots and interviews.  I think we’ll see photographers carry this camera around as an accessory to help them grab additional angles as they shoot their stories.  Also, this gem of a camera deserves to be on a stabilizer or helicopter, because the weight and size begs to go airborne.  Same goes for mounting on a car.   When we shot with Matt’s “Mocki” I fell in love with how easy the camera was to use, and having a smaller camera with a sensor giving you a very similar “look” to the BMCC may be too hard to resist.  The only problem for me… waiting for the raw recording capability. 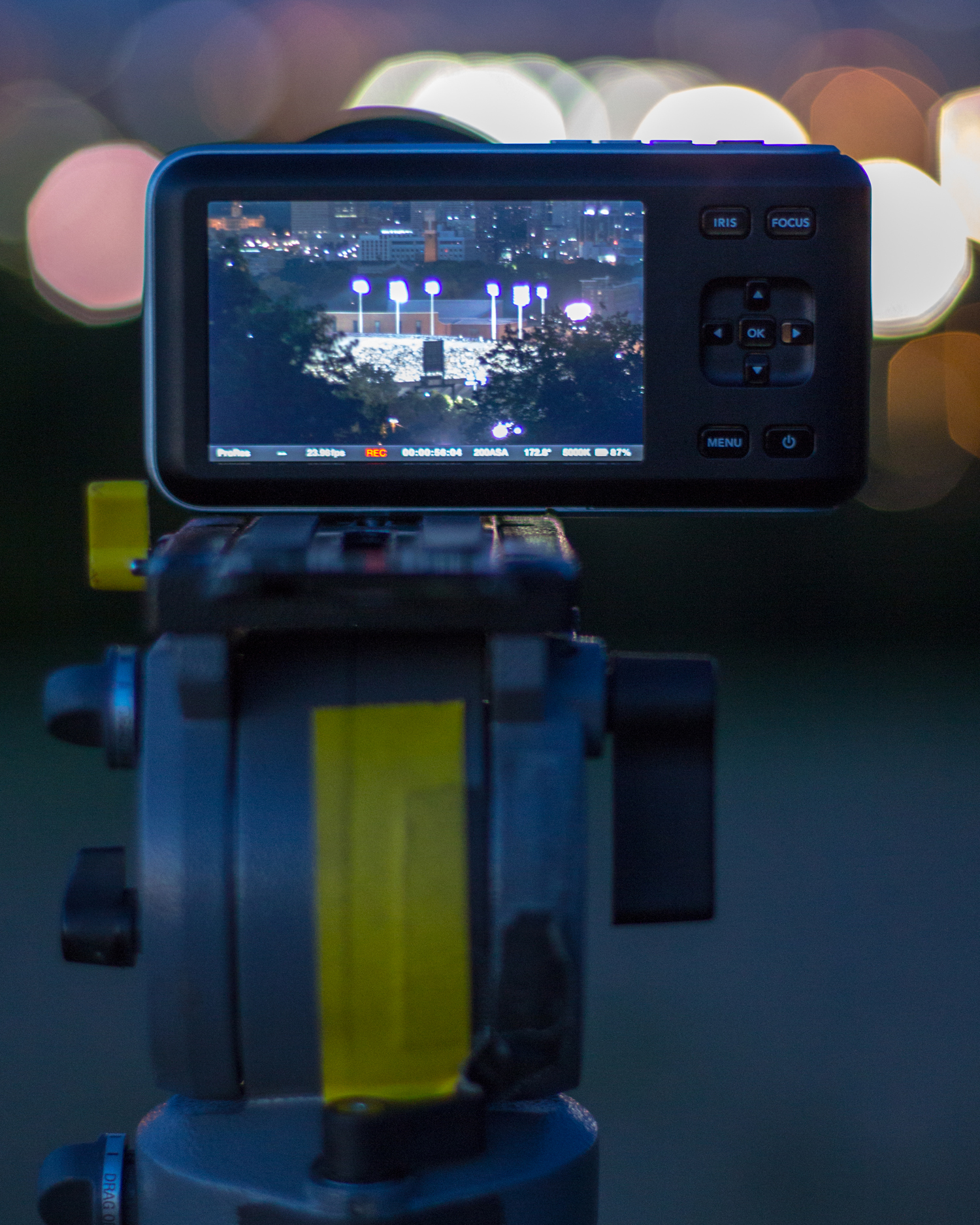