For April 2019 Adobe has another NAB timed release of updates to the entire video-focused Creative Cloud apps. While Adobe Premiere Pro is always my focus as an editor you can get an idea of what else is to come in this little overview video. And lots of features. Some big, some little.

And this seems like as good a place as any to remind editors that in the Creative Cloud app you can install older versions of Premiere.

One nice thing that Adobe has done is keep a lot of older versions of their software available for download.

PVC has an interview with PPro product manager Patrick Palmer as well. Now that that is out of the way … on to what’s new in Premiere!

Copy and Paste (well, dragging copy really) of effects in the Track Mixer

Why start off with this seemingly small addition? Because it’s something editors have been requesting for years. Years I tell you!! While it’s technically not a copy/paste in the Edit > Copy/Paste menu it’s now possible to drag and copy effects from one place in the Audio Track Mixer effects rack to another, be it in the same track or another one.

Dragging effects around the Audio Track Mixer will move them. CMD+dragging within a track will copy an effect. OPTION+dragging an effect between track will copy an effect between tracks. When you’ve got the copy modifier pressed properly you’ll see a little + by the little drag hand. It’s not presets and it’s not being able to save these parameters for use in other projects but its’ a start.

This is one of the cooler and more unexpected additions to this PPro update and one that will take some work to find out how exactly to use it to its full extent. With Freeform View, Adobe has essentially released the Premiere bin Icon view from the confines of the rigid grid. Imagine being able to resize clip and image thumbnails in varying ways to suit how the editor wants to view them. Imagine being able to stack thumbs together in groups and batches that make sense for how the editor wants to view and organize their media. Now imagine being able to recall those sizes, arrangements, and groupings via saved view presets and you’ve got a pretty good idea of how Freeform View works.

There are more things to manage with the Freeform View including the size of clips, how they are stacked and where they are placed. I can tell you the ~ tilde key to take a bin full screen and/or a large second monitor is going to be your best friend if you want to make the most of Freeform View. Laptop only editors will struggle the most to make good use of this new tool. Freeform view will give assistant editors a new task though!

With new things like Freeform view comes new options and there is a Freeform View Options item under the bin “hamburger” menu. The most important thing it allows is to choose what two types of metadata you can view in the two lines of text under the icons. Setting them both to None doesn’t give you more icons as it’ll just be blank space.

With new power comes new ways to make sense of that power and layouts are the key. These Layouts can be saved, managed and recalled and will be the key to effective Freeform View usage.

You’ll need to be careful where you right+click when working in Freeform view as noted in the picture captions above. Those menus are grayed out when not applicable. They seem to be project specific which makes sense as your freeform viewing desires will change greatly depending on the media available.

I like it. I’m sure I’ll use it a lot more on some projects than I will on others and I think it should be noted it will take some time set up good Freeform Views and you’ll probably be constantly modifying them. Thankfully you can update an old layout without having manually rename it like with bin column views. While this new Freeform View isn’t exactly what editor Alan Bell was envisioning it’s at least a step closer.

If you are an editor who makes use of different metadata column views and have a ton of saved List View column layouts you’ve set up via the Metadata panel you’ll like the addition of new View Presets options under the project panel hamburger menu in a bin tab.

Previously these saved metadata views have been buried within the Metadata Display menu and it was way, way, way too many clicks to change from one saved view to another. Now they can be accessed both by the panel menu and by keyboard shortcuts.

This is a good change and another one of those non-flashy features that won’t get mentioned in the marketing materials but will be very important to working editors.

And now for a little gif of this in action because I didn’t think we’d ever see this.

Notice that in addition to remembering one of my presets has the thumbnails turned on things like column width and the sort columns are remembered as well. While you use the Metadata Display to set the desired columns up all of those presets you’ve got saved under the Metadata Display won’t be available under these new view options so you’ll have to set them up again.

Speaking of view there is a brand new View menu in your menu bar that places a number of useful things from around the interface into one place. This was probably a necessity with the new Rulers and Guides as they needed a central location to be accessed and saved. 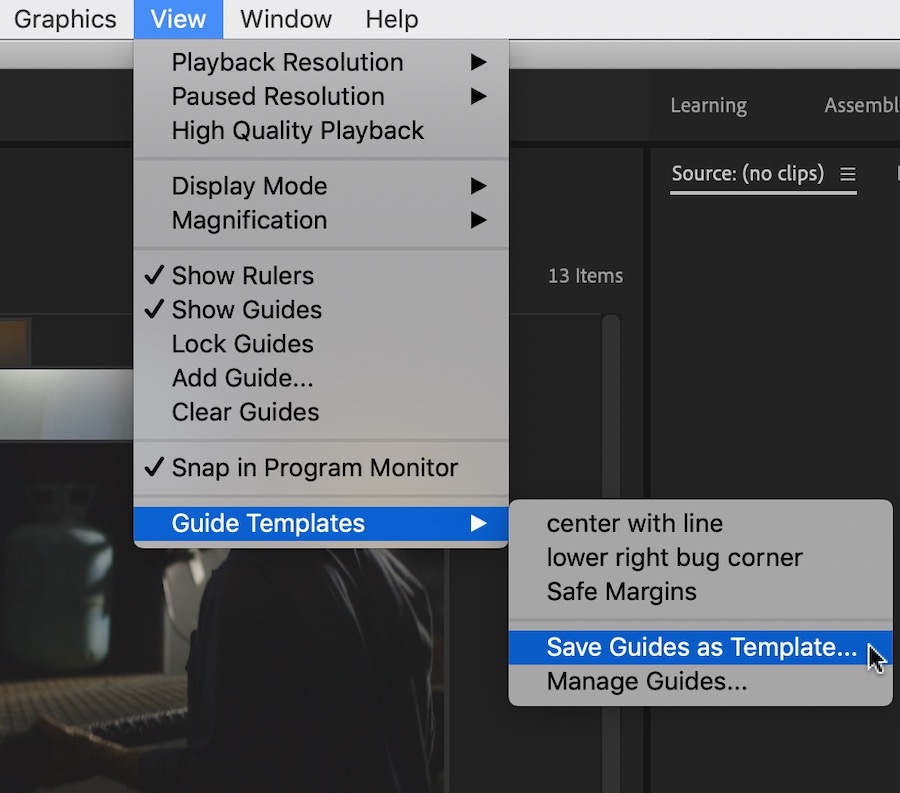 Many of these options are still available under the Source or Program wrench menu. This just gives a more central place to access them and provides a place for lots of new options for Rulers and Guides.

And speaking of Rules and Guides this one has been a long time coming in that Photoshop and After Effects has long had rulers and guides that can be used in the viewers to help align graphics and images for easier and more effective design. Toggle them on and then drag them out just as you would in Photoshop. And snapping out the guides is a go too.You’ll want to set up a new button layout under your Program monitor if you like the visual way those buttons can show you want you have toggled on and off in the Program monitor. And of course, the guides can be mapped to keyboard shortcuts as well. It’s great to be able to save those guides for common design uses.

Snapping to the guides can be toggled on and off and as you can see in the gif above there’s some visual feedback provided in the Program monitor as you snap around. The Snap in Program Monitor keyboard shortcut is separate from all the other new Rulers and Guides keyboard shortcuts since it lives in the new View menu. Take note of that as you’ll probably want a fast way to toggle that program monitor snapping on and off.

You can also export guide layouts out of After Effects and bring those into PPro so there isn’t any question of how the motion graphics artist wanted the design to look when handing the work over to an editor. Who could ever imagine an editor changing the look of predesigned graphics?

Remember Project Cloak? It’s now in After Effects as Content Aware Fill. This has been an amazing thing in Photoshop for years (and since Facebook purchased Fayteq and seems to have killed their similar technology) we’ve been waiting for this since it was previewed at Adobe MAX. I don’t do a ton of AE work but I was wondering how easy it would be to quickly use the new tool after just watching on quick demo. So I tried it a locked off shot.

The above image had 5 things I wanted to be removed. Yes since it’s a lock-off you could make your fills in Photoshop. I did one mask at a time and let Content Aware Fill generate new fill layers with video generated from pixels in the entire clip. I don’t know if you can do more than one at a time or not. Perhaps some study would help before I use it on anything more difficult.

This is a cool new feature of the new After Effects.

A few other things of note:

Adobe engineers have a big task in supporting many different hardware configurations. With this release, there is a System Compatibility Report under the Help menu. It also might report issues during installation.

Faster systems overall bring performance improvements with things like mask tracking, heavy codecs, and effects. During the press briefing on these updates, the question was asked if a Blackmagic eGPU would be supported and the answer was “you will definitely be able to use external GPUs to gain performance in Dual GPU scenarios.” I take that as a yes.

Look for the new ability to add multiple strokes to text as well as different options for masks and fills and the grouping of elements in the EG panel.

Decoding error will use adjacent frames

If you’ve ever been hit with the dreaded red frames you’ll be glad to hear that, depending on the situation and where the frames are, Premiere Pro will use adjacent frames or in some cases black frames instead of red. Repeating a frame is a much better idea than a flash of red. You’ll want to check your Events panel for a long of any decode errors and what may have happened.

You can now duck audio you’ve designated as Ambience in the Essential Sound panel. Whoo hoo, I suppose.

Consolidate Duplicates works for folders too

I haven’t tried this one but I hear that the Edit > Consolidate Duplicates command that has been around for a while now works with folders/bins if they are at the same level in the project.

Overall this is a pretty good looking Adobe Premiere Pro release with some good stuff. There’s lot of bug fixes in there and I hope for better stability overall. Remember to check out Adobe’s User Voice to let your voice be heard on what should happen in future versions of Premiere Pro and other Adobe apps.