The whiners need to wake up and understand the message that has already been written on the wall for over two years. 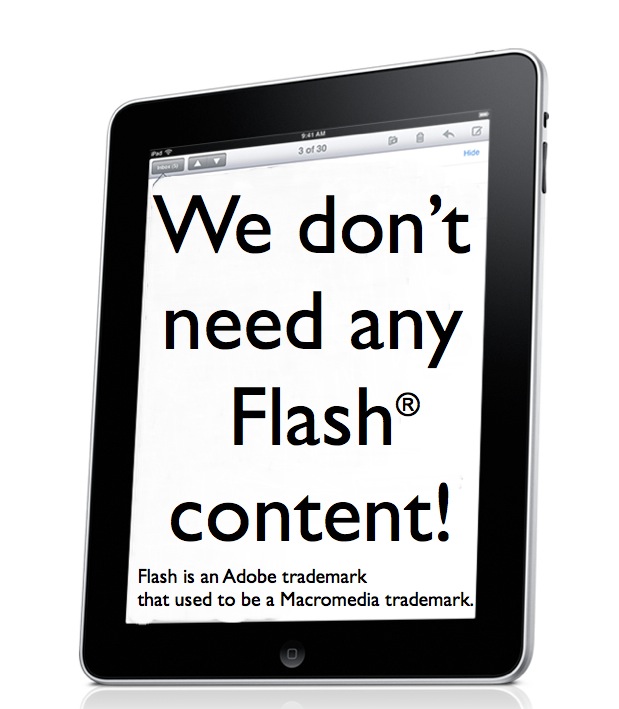 I am glad that the iPad doesn’t support Flash, and I hope it remains that way. I like efficiency, stability, security, omni-platform compatibility, direct search engine friendliness, truly open-standards, and long battery life. Back in 2008, I published Encoding web video in the age of the iPhone. Among many other topics, the 4-page article talked about how content producers are best served by steering clear of Flash-dependent media if they expect to have it be readable by what I called the fastest-growing computing device segment, which of course was -and still is- mobile devices. Since then, there has been exponential sales growth in that category, including iPhones, iPod Touches, multimedia Blackberries, and a handful of Android phones from several different manufacturers, including the recent Droid, Milestone, and Nexus One. On time for the iPad launch, some of the most important content producers in the world have understood the message that has been on the wall for over two years, and have already made themselves compatible with these Flash-free mobile devices, including Brightcove, CBS, CNN, ESPN, Facebook, Flickr, Major League Baseball, National Geographic, the National Hockey League, Netflix, Nike, NPR, People magazine, Reuters, Sports Illustrated, TED, The New York Times, Spin, Sports Illustrated, Time, the TWIT network, YouTube, Vimeo, Virgin America, and the White House. It’s time for the whiners to stop complaining and get the message too. Despite some criticisms about certain details in their products (i.e. their current lack of SFTP support), I love Adobe, and I admire its past, present, and future developments. Flash is perhaps the only thing that we don’t need anymore from Adobe, and that simply creates content that is unreadable on multiple millions of devices. My appreciation for Adobe should also be clear by my recent article called: Will Adobe’s new Mercury technology provoke a sudden exodus from Final Cut Pro to CS5?

If the iPhone and iPod Touch were the first two major devices to encourage content producers to avoid creating (or to replace older) Flash content, the iPad is perhaps an even more important one. As I have done in the past, I will continue to generate articles, seminars/webinars, and tutorials about how to create content that is compatible with popular mobile devices, as well as continuing to work with more traditional laptops, notebooks, and desktop computers. This short article is just to remind those who already knew, to nudge those who knew but were in denial, and to inform those newbies who perhaps weren’t aware yet.

Get a full index of Allan T©pper’s articles and upcoming seminars and webinars at AllanTepper.com. Listen to his radio program TecnoTur, together with Rub©n Abruña, Vanessa Brown, Tanya Castañeda, and Liliana Marín, free via iTunes or at