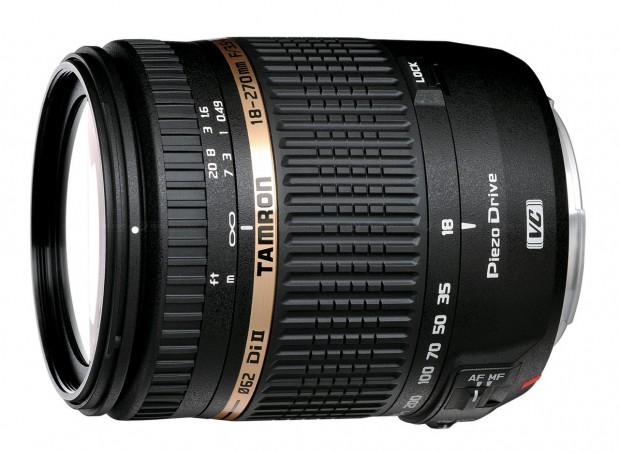 The 18-270mm Di II VC PZD is an astonishingly light, compact ultra-high-power zoom lens with a filter diameter of Ø62mm. Weighing in at 15.9oz., this new all-in-one zoom lens is equipped with an AF unit driven by Tamron's new PZD (Piezo Drive), an ultrasonic motor that delivers faster and quieter focusing when the autofocus is engaged.

The 18-270mm Di II VC PZD is easy to use and highly portable – a high-power zoom that will offer the user the versatility to shoot in a variety of situations. Its wide zoom range of 18-270mm positions the lens as an all-purpose workhorse for any photographic situation.

Compact and Easy to Carry 15X All-in-One Zoom with Outstanding Feature Set
The 18-270mm Di II VC PZD boasts the world's highest zoom range at 15x magnification for a lens with its compact size and light weight, with the added value of Tamron's proprietary VC (Vibration Compensation) image stabilization. At 15.9 ounces, measuring 3.8 inches in length (from mount face to the tip of the lens), and 2.9 inches in diameter with a filter diameter of Ø62mm, it's a compact and easy-to-carry lens. A minimum focusing distance of 19.3 inches throughout the zoom range and a maximum magnification ratio of 1:3.8.

Tamron's new PZD (Piezo Drive) autofocus technology delivers silent, high-speed autofocus in a compact lens
Ultrasonic motors are divided into two categories depending on the principle that generates the energy to move the drive: traveling wave motors and standing wave motors. Traveling wave motors include the ring-type ultrasonic motor used in the recently launched SP 70-300mm VC USD as well as other lenses, but this lens employs a newer technology, the PZD (Piezo Drive), which functions on the standing wave principle.

A standing wave ultrasonic motor utilizes high-frequency voltage to extend and turn the Piezoelectric (Piezoceramic) element, thus moving the entire element in a standing wave movement. The metal tip is the contact point of the element to the rotor, and moves in an elliptic motion from the swiveling motion of the moving element, and the friction from this motion turns the rotor. Standing wave ultrasonic motors have the distinct advantage of being smaller than their traveling wave counterparts, and therefore allow a more compact SLR lens size.

New VC Mechanism (Moving Coil Method)
Tamron's original VC image stabilization mechanism utilized a moving magnet system whereby a heavy magnet was positioned near the moving VC lens element. In the new VC unit, the positions of the magnet and the coil are reversed, and because of this, the VC optical lens element is attached to the coil. The new VC mechanism employs a moving coil mechanism with a lightweight coil, and the lighter coil reduces the load on the drive system. Thus, the lighter, more compact new VC unit contributes to the lens's overall light weight and compact size.

About TAMRON Co., Ltd.
‘New Eyes for Industry' is Tamron's slogan, as they are a comprehensive manufacturer of a wide range of original optical products, from interchangeable lenses for SLR cameras to various optical devices for both the general consumer and OEMs. Tamron makes optical products that contribute to a range of different industries. As a leading manufacturer of optical devices, Tamron will continue to exercise its rich creativity and leading-edge technical prowess to make advances into various industrial fields.

Tamron is aware of their environmental responsibilities and aspires to preserve the environment in all business activities.

*1For SLR high-zoom-ratio lenses with 15x magnification capability. Current as of December 2010. (Source: Tamron).
*2 PZD (Piezo Drive) is a standing wave ultrasonic motor system developed by Tamron. The motor is faster and quieter than DC motors when the AF drive is operated, and compared with ring-type ultrasonic motors, it has an actuator that facilitates lens design and reduced size.
*3 Di II (Digitally Integrated Design): Di II lenses provide an optimized optical design for exclusive use with DSLRs with APS-C size sensors. Di II lenses cannot be used with DSLRs with an image sensor larger than APS-C size, or with 35mm film SLR cameras.
*4The Sony mount version is not equipped with the VC mechanism as the bodies of Sony's DSLRs have a built-in image stabilization function. Consequently, the Sony mount version is referred to as 18-270mm F/3.5-6.3 Di II PZD and does not include the VC designation.
*5Coupler system refers to a system that uses a shaft to harness the AF motor built into the camera body to operate the lens. The “N” classification lenses with coupler systems are: AF 55-200mm F/4-5.6 Di II (Model A15); AF28-300mm F/3.5-6.3 XR Di (Model A061); SP AF200-500mm F/5.6-6.3 Di (Model A08); and SP AF180mm F/3.5 Di (Model B01).