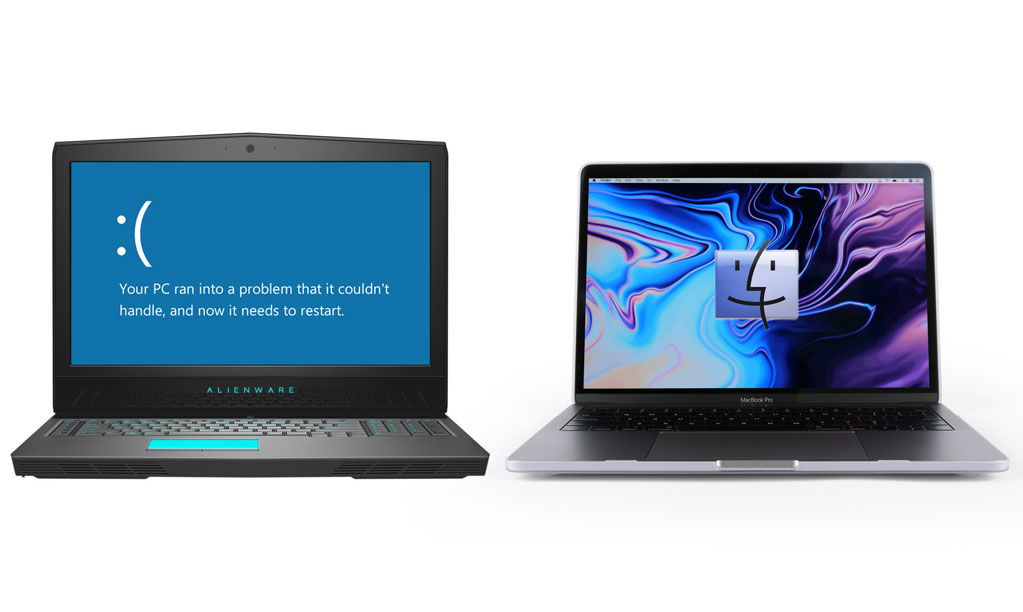 As with many folk in the film industry, the absence of Nvidia options from Apple’s line of laptops forced me to look at Windows offerings. A not inconsiderable amount of research led me to the conclusion that Alienware would be the best match in terms of power (quad-core top-of-the-line Intel CPU, and full GTX 1080 graphics card). And I have to say I loved it…when it worked. And that, dear friends, is the beginning of our cautionary tale.

The only real downside I had initially with the Alienware 17 R4 was the size and weight: it’s portable in the way that a dorm room refrigerator is portable. Once I accepted that part of my daily workout regimen would now include carting the laptop to and from the car I got over the heft. The laptop is fast, includes all the modern amenities (Thunderbolt 3, and USB 3) and you can thankfully turn off the multicolored gamer light show.

As far as the operating system goes, I didn’t mind the transition at all. There are a few OS X niceties I miss in Windows, but there are a lot of Windows conveniences I now miss when I’m back on a Mac.

However, there was one crucial part of the Apple experience I had taken completely for granted: 21st century support.

When a Mac goes bad under warranty you walk it into the local Apple store and if the problem warrants repair they’ll typically hand you a replacement unit, or arrange for one to be picked up within a few days. Not so with Dell, Alienware’s parent company.

The first visit with Dell support

The great misadventure began with delivery. Upon boot up I discovered that a minion at Dell’s technical support center in Texas had managed to install the OS onto the spinning disk instead of the SSD. After alerting Dell to the problem they promptly scheduled two separate remote sessions to clone the drive to the SSD. I suggested that they could just nuke everything and start over since I hadn’t yet installed anything of value to me. They insisted that cloning was the way to go. This worked for about two weeks, then the boot manager finally gave up (actually there were somehow two boot managers installed) and refused to boot in. I had the option to void the warranty to try to recover my data or just wipe the drive and do a clean install of Windows myself. I chose the latter.

In the meantime the sound card died. Now if I were to give you advice at this point it would be: live without sound, it’s not that important. You see, that was the beginning of the end.

The technician who came to the house to service the laptop brought an entirely new mainboard. After several hours of wrestling with the disassembly and assembly and cursing as he lost part of the wifi antenna, he handed me back the laptop. After I was unable to boot it due to the aforementioned boot manager issue, he rebooted a dozen or so times and finally managed to trick the boot manager into booting. With that he declared his work there done and disappeared. (The next morning I was back to performing a dozen or so reboots to achieve the same trick.)

It wasn’t until the next day that I discovered the annoying gamer LEDs were now permanently stuck on. Oh, and there was also the fact that one of the chassis’ screws was sticking out a few millimeters. Obviously the technician had found it too hard to screw back in and finally gave up. In addition, the CPU and GPU fans seemed to kick up a lot more often and more quickly than the previous system, but that was the least of my worries.

After Dell put me through a 5 stage software diagnosis test of the lighting systems taking several days of back and forth emails another technician was sent out. After he wrestled with the system for a few hours he completed the repair. The stuck LED was still on. He left explaining that he’d completed his part of the repair. Fortunately after he left I performed the complete reinstall of Windows and the LED turned off. Finally, I had a working system. Or did I?

A month or two went by with the system purring away when all of a sudden my space bar and enter keys decided to periodically stop working. To the point that in one of my support emails to Dell I had_to_use_underscores_to_actually_type_out_the_response. Time for—you guessed it—another technician visit.

The third technician showed up, spent two hours replacing the keyboard then told me to test it. I noted that the keyboard was raised on the left and that the caps lock and num lock lights failed to illuminate. He confirmed that was indeed the case and proceeded to spend another two and a half hours re-replacing the keyboard. As he did so he discovered a surface mount resistor (presumably from the mainboard) floating around in one of the cooling fans. He took a photo of it (he called it a “fuse”—evidently he wasn’t all too familiar with the parts inside a laptop) and made note of it. The technician finished the reassembly and confirmed that the laptop keyboard was now working.

Wait, what? Yes, you heard me right: components from the motherboard were evidently floating around inside the chassis of my laptop (well, at least one).

At this point a 21st century support service would be mortified by the customer experience: three technician calls within 3 months, with the first technician causing more damage than he fixed. And now a technician is documenting components detached and floating around inside the laptop case. Time for a humble apology and a replacement laptop, right? Alas no, we’re in the land of Dell.

The adamant position of Dell’s support team was that software diagnosis needed to be performed to determine where the component may have come from, then yet another technician would be sent to replace the offending item. Now if you know anything about electronics you know that the absence of a resistor may never show up on a test, since it’s just as likely to mess with the tolerances of the circuit to which it belongs than to stop things working all together. If it’s a pull-up or pull-down resistor it might cause intermittent instability like, say, causing certain keys on the keyboard not to work…And as we all know based on historical evidence, the problem is unlikely to reveal itself until exactly one day after the warranty expires.

Ah, but there is another option: I can send the laptop into the Texas service center (the same capable group who initially installed the OS on the wrong drive) and wait an indeterminate amount of time for it to be fixed. No loaner unit while I wait. The support manager suggested the wait times are typically 5-7 days (not counting shipping times), but again based on past experience this sounds like it could be two weeks between the laptop leaving my hands and returning to them. That’s a long time to be without a workstation laptop.

Now I get it: Dell is kind enough to provide on-site support and that’s admirable. In fact, the response time once I’d jumped through all the software test hoops was never more than a day. However, at some point when a customer has experienced the embarrassment of errors that I did, surely there’s room to make an exception and just ship a replacement unit. Evidently not: in fact the manager assured me that was never the case. (Strangely the last tech informed me that another customer had been successful in getting a replacement; I guess I didn’t get irate enough with the phone staff.)

Presumably I could have another dozen of these on-site visits until there are no chassis screws left unburred, so many SMC’s floating around in the chassis that you can hear them hitting the fan, or the warranty period runs out.

What’s the solution at this point? It looks like my machine will spend two weeks in Dell’s Texan purgatory while I pray that it returns with less problems than those with which it departed. How will I get any work done in the intervening period? Time to dust off that old Macbook Pro…