I don’t have any pictures from the talk at the Kabuki Theater in San Francisco today. 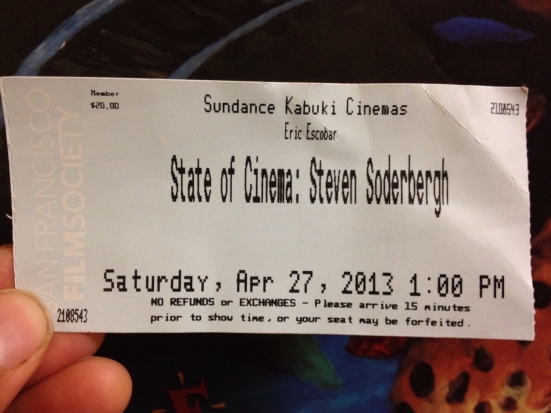 Steven Soderbergh requested that people don’t photograph or record video or audio of the talk, and I am honoring his request. And I was too wrapped up in his words to take notes, or tweet. Thankfully Joseph Beyer (@cinejoe) from Sundance tweeted all the bullet points of the talk. Check out Joseph’s twitter stream starting at 2:09pm 27 Apr 13 until 2:46pm 27 Apr 13. That’s PDT.

EDIT: And someone has “leaked” an audio recording. And the photos in this article are from the event, taken by Pamela Gentile for the SFFS.

This presentation will not be put on-line, it was recorded by the SF Film Society, but only for posterity I suppose. I will do my best to tell you what I think it was about.

1) There is a difference between Cinema and Movies: Cinema is something that is made by an artist with a specificity of vision. Cinema is unique, something that can’t be made except by the person that made it. Movies are “seen”. Sometimes there is cinema in movies, but nowadays less and less of that because it is under assault by the studios and the audiences. Movie studios are run, less and less, by executives that know or love movies. They decide what movies get made and by whom as purely business decisions and business politics. They are beholden to the numbers and a culture of decision-making driven by focus groups and financial returns.

2) Numbers and Money: It has never been a better time for the five or six large American film studios to make 100 million dollar action/ scifi/ fantasy films. Those films make money, they sell in places other than the United States. The studios are making fewer of them each year and taking more of the audience dollars than a decade ago. While at the same time, the production of independent films has doubled, while our share of the audience pie has shrunk considerably.  This is true even as the overall number of audience admission has shrunk by 10.5%.

3) Stealing is Wrong: Not much more to say except that Soderbergh thinks that pirating content has had a negative financial impact on content creators.

4) Marketing Costs Are Fixed: It doesn’t matter if your film cost 5 million or 50 million, it still costs about 70 million in marketing and distribution to do a wide enough release to recoup costs. Studios have found that there risk is lower and returns higher on the big budget films. How many 5 million dollar films have made 70 million?  No one knows, and people have tried to figure out how to make this cost lower.

5) Executives Don’t Get Punished, Filmmakers Do: When a film bombs, it is the fault of the filmmakers. There is no turnover in the executive offices, the artists are just replaced with new artists and the machine learns nothing. There is no support of a filmmaker over his or her career. No talent development strategy so that a filmmaker grows by trying ideas, making mistakes and triumphs, learning from the experiences and becoming a better filmmaker. It is opening weekend numbers and end-product profits perspective. This is killing Cinema in the Movies.

Soderbergh dropped this math on us and concluded that if you’re a studio then the set up is working fine. Then he pontificated that if he were given a half a billion dollars he’d gather up all the really good indie filmmakers he knew (name checked Amy Seimetz, Shane Carruth and Barry Jenkins) and set them loose within a timeframe and budget total and say go for it, make me three films, spend the money as you see fit. But no one has given him a half a billion dollars.

Soderbergh did not mention his retirement or what he’s doing next (painting?). There were no real words of wisdom other than a clear picture that he has been fighting within the system for the last 20+ years, which is inspirational all on it's own. He said that right now, someone, somewhere out there is making something really cool and we’re going to love it. This happens every year, it is the eternal hope of independent film and Cinema.

OK, that’s my memory of what happened, borrowing heavily from Joseph’s tweets to jog my memory. THANKS JOSEPH!

My takeaway is this: Steven Soderbergh is a brilliant filmmaker who combines his honest curiosity with an amazing intellect, sense of humor and generous spirit. He, more than any other American filmmaker, has embodied what it means to straddle the line between making art and corporate entertainment the last twenty five years. Somehow, he’s managed to create art that matters, while also bringing art, soul and subversion to big budget studio projects that surely ran the gauntlet of endless notes and interference. He remade Solaris with George Clooney (!) and did five hours of Che on a RED One (!!). He is a film lover, a tech geek and he shoots his own camera. He is a better filmmaker than all of us and he’s hanging it up at 50. I was really, really hoping for an explanation. Rather than tell us why he’s leaving, or where he’s going, or what he loves about filmmaking, he gave us a lecture on studio economics. He said that the space for Cinema in Movies is shrinking because, quite honestly the studios are doing really well without it and without us.

What I LOVED was that he gave an overview on how an organization (he said a hypothetical half a billion dollar funded studio) could develop and support filmmakers to create Cinema over their careers. An organization that was not driven by decision-makers that don’t know or care much about film. An organization that could track and identify talent and give them a place to work. This, in my opinion, is exactly what the San Francisco Film Society has been doing the last half decade. (DISCLOSURE: I am, of course, biased since I have received fifty thousand dollars in grants over the last three years, seek regular advice and counsel from SFFS staff, and go to lots of free events that have made me a better filmmaker.) I am not alone, there is a whole group of us who are either from the Bay, or have been attracted here by the film community and the resources of the SFFS. Our scripts, films, post costs are getting funded by the organization. They are giving us free office space, a staggering amount of year round programming and exhibition and an incredible international festival.

I know that film arts organizations, and festivals, are often labeled “gate keepers” —  something designed to keep people out and create zones of exclusivity. I don’t really see it that way.  Studios are exclusive, they can afford to be, their goals are different than creating Cinema. They sell tickets and BluRays. I think of film arts organizations like the Sundance Institute and the San Francisco Film Society not as gates, rather I think they are like “victory gardens” that are keeping Cinema alive in America.

EDIT: Take a read of the great write-up by Sean Gillane over at Indiewire