The introduction of video in DSLRs amazed photographers, but as soon as the static images started to move they knew they had to understand how to control them. Award-winning filmmaker Stephen McGee made that path and now shares some of his experience. 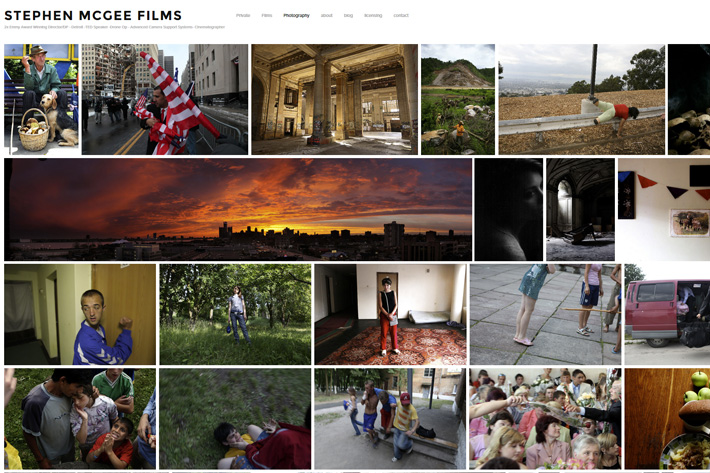 Stephen McGee started as a photojournalist, learning to tell stories with a single photo. Now he takes 24 frames per second, more or less, for the stories he tells. Discover, in his own words, 7 Ways to Transition from Photo to Video.

Stephen McGee is a two-time Emmy Award-winning filmmaker who works with a wide range of commercial clients, non-profit groups, journalism outlets, and more including Ford, The Obama Administration, Intel, The New York Times, Chevrolet, CNN, the NFL, and Good Morning America. He is also Brand Ambassador for Sachtler.

In this article Stephen McGee looks back to when he lived under the poverty line, what the Emmy Awards represented in his career or why an iPhone is a great tool for taking notes. It’s an interesting story packed with tips that will help you to get better at video, even if you keep being a photographer at heart.

So, without further ado, here are Stephen McGee’s 7 Ways to Transition from Photo to Video.

As I look back over the past 15 years, growing in my career was as much about creating work as it was about how I approached the challenges and successes in life. To help future filmmakers, this article will break down some of the overall truths that I lived by in my transition from a photojournalist to a successful independent filmmaker.

1 – Pay attention to what’s around you

As a DP or camera operator, the way you uniquely see the world is important to how you shoot. This means the way you actually see, what details you pay attention to, the colors you like, the people and subjects you are drawn to, etc. This is what makes you different from other filmmakers and, ultimately, is what gets you hired.

Find a way to translate what you are seeing to your video. Foreground and background elements move constantly and can transform an average shot into an extraordinary one so don’t be afraid to look around and be aware. I frame my subject in their environment and once I have that, I look at all the contributing elements – leading lines, subtle details, details that should be included in the frame, and what should be left out. Usually, all of those are fixed with micro adjustments. I frame details with my Small HD 502 EVF and then use my RED on-camera monitor as a reference to notice what is around me. It’s a constant play between those two viewpoints.

From a day-to-day standpoint, a smartphone is a great way to explore different angles. I’ve taken most of my favorite photos with my iPhone. As you do this more and more, you will recognize great angles and more details that can transform your images.

I started my career as a news photojournalist, and great photojournalists and photographers can tell an entire story in a single photo. I noticed that these same photographers sometimes struggle when it comes to successfully using a video camera. This is because news photography is about capturing peak moments while filmmaking is about telling a story through sequences. The key here is to never forget the story and how each sequence should advance the story or add to it in some way.

Some sequences are better captured on film than photography and you can’t tell a great story without the proper gear. Nothing will jar your viewer out of your story faster than a jerky move or shaky video, let alone terrible audio. For me, my top three essential supports are a tripod, a gimbal, and sometimes a slider or shoulder rig. My Freefly M10 gimbal is important because it allows me to be mobile and to capture the scene around me as it unfolds. I see the gimbal as a way to connect the space in between my photos where I would have normally just walked, however, you just can’t replace a gimbal with a good, solid tripod.  I had forgotten what a great tool a tripod was until my most recent project.

In Anthem of Us, I was tasked with telling the story and capturing the feeling of modern day Detroit. This was after years of recession and people moving away; there was a particular feeling in the air. I needed to tell this story in an authentic way without being cliché. I was able to use the Sachtler Cine 7+7 with a quick release plate to capture some of these shots. The Cine 7 + 7 is so smooth. That is what you get from a premium tripod. It allowed me to do the gentlest push into these really subtle shots, letting the viewer connect with what they were seeing on the screen. Not only that, but it’s easy and fast to setup and allows the motion in your environment to translate into your shot, which provided great stability so that viewers have time to connect with the subject in the frame.

The effect worked and the film really resonated with audiences. Platinum-selling artist Big Sean saw the film and agreed to do a candid, interview-style voiceover. As a result of our efforts, the film received over 400,000 views online in just a couple of days after its release.

Even after winning back to back national Emmy Awards, I had three years as a freelance director/DP/photojournalist living below the poverty line, despite the fact that I was hired by all the big journalism players at the time: CNN, Wall Street Journal, New York Times, BBC, AJ, and a dozen more.

But that work didn’t fill my time. I had my own camera, a tripod, slider, a bike, and a dedication to what was around me, so I hit the streets and made films that mattered to me. I treated myself as my client with my constant need to improve my eye and develop a style that I eventually got paid for. Around that same time, I became extremely dedicated to the simple “pillars” of great storytelling and cinematography; studying the masters with the sound off, moving my camera in styles I was inspired by, etc. Ultimately, not having enough gave me more to do and while complaining in tough circumstances was only natural, I instead created a body of work that I was proud of and got me recognized.

4 – Focus on growing, not winning

As I mentioned above, I was fortunate enough to receive two Emmy Awards; in 2006 for a 25-part series I directed, shot and edited on Marines from Michigan – alongside David Gilkey – and for a short I co-produced and edited on how women’s rights in Detroit had progressed 40 years after the famous riots of 1967 told through the lens of Aretha Franklin’s song “RESPECT.”

Though it is a great honor to be recognized with accolades, awards can leave you empty if you make your life about them.

Ultimately, three things helped me and the team at the Detroit Free Press to create great stories that I carry on in every production: 1) we approached our films with the storytelling and framing disciplines we had developed from photojournalism, 2) we were very dedicated to a local story, and 3) we had a growing rapport with our subjects which led to great opportunities in our coverage. 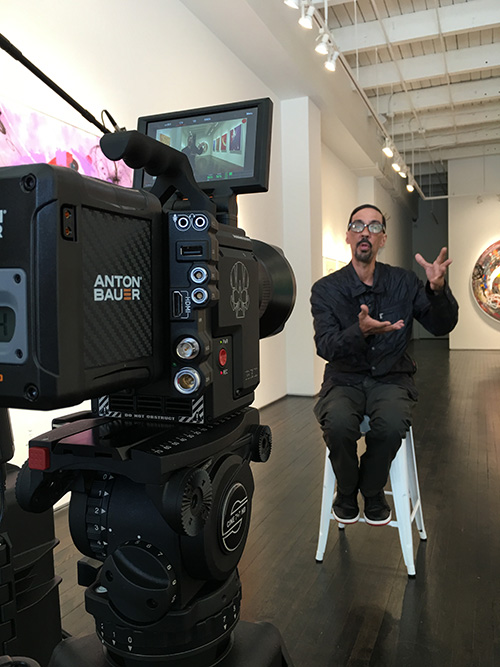 Great b-roll can be made by creatively approaching the visual chapters in your scene. It can add an incredible amount to your story and should speak as much as your voiceover. Don’t be afraid to go where there isn’t another photographer to get that interesting, unique perspective.

For example, while working with the New York Times on a still assignment, I had to cover the traditional podium speech of an auto executive at a corporate event. After capturing that establishing, straightforward angle that 30 other photographers from other news stations were getting, I began looking for a unique perspective. I went to the side, overhead, and switched lenses looking for where the other photographers weren’t and I made a great shot just from thinking outside of the box.

My point is that by switching angles you can add more to the story. In this case, there were 30 news photographers capturing the action so a reverse shot from the speaker’s perspective would show that. Maybe the crowd is reacting – show that. Find new angles to help tell the story and look around you. Remember, you have to be the eyes for the viewer, so what can you show them to help tell the story?

Last August, CBS/NFL saw some of the work I did for the United Nations and they contacted me to create a three-minute opener for the show Thursday Night Football. I created the piece but needed a voiceover. So, we sent the completed piece without voiceover to Jeff Daniels and he was so moved by the visuals and the storytelling that he agreed to do the voiceover for the piece that aired on national television.

It may not feel like it, but you always have time to be creative. There are times you will have to get that podium shot at a press conference or an event and other times when you can find a different angle, either by using a slider to create a reveal or a Movi to show the viewer a new cinematic experience.

After you get that first shot, go look for those creative angles. For me, speed equals creativity, so the faster you can move and get set up without having to think about it, the faster you can enable your creativity. This speed helps me get into the scene and capture unplanned, candid moments that create the story. If I can set up my gear quickly or switch from my tripod to handheld effortlessly, I can easily get the shot that I am seeing in front of me. 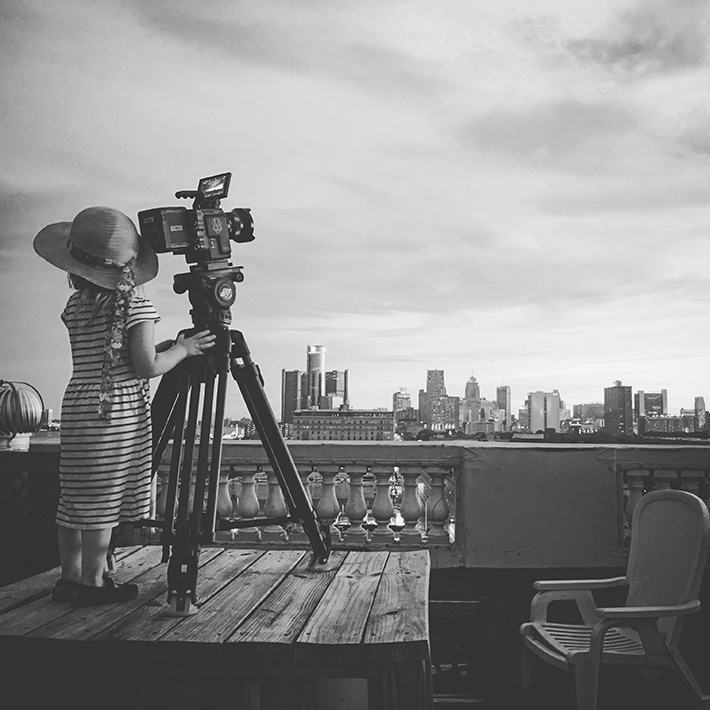 7 – Treat Others with Respect and Courtesy

Be nice to your clients, staff, subject, and everyone in between. If you’re courteous, work great with others and are good at your craft, your name and work will eventually get noticed. Keeping clients isn’t an art, but a matter of laying out a plan, communicating that plan, listening, and then delivering. People have to want to work with you, so you’ll lose clients and damage your reputation if you’re not honest and kind.

As a newspaper photographer, it’s your job to meet a variety of strangers and learn how to make them comfortable enough to take their picture – a picture or story that can’t look forced or uncomfortable. And you have to be able to do that for each job. Stand up for what you think, but be polite, respectful, and nonaggressive about it. It’s an important approach that I use in both my documentary and commercial work. Having that perspective allows me to go into people’s lives and capture those real moments that matter to the subjects and to my film. With that in mind, you can tell a story in an organic way that doesn’t feel forced.

We all have a desire to make, create, and document what we think is both beautiful and important and, as filmmakers, we all have an obligation to go out there and tell the stories that matter to us and to the world.