StageRole is a pioneering new way to perfect your performance and make learning your lines a lot more fun, while in lockdown, whether your background is theatre, TV, movies or voice over. 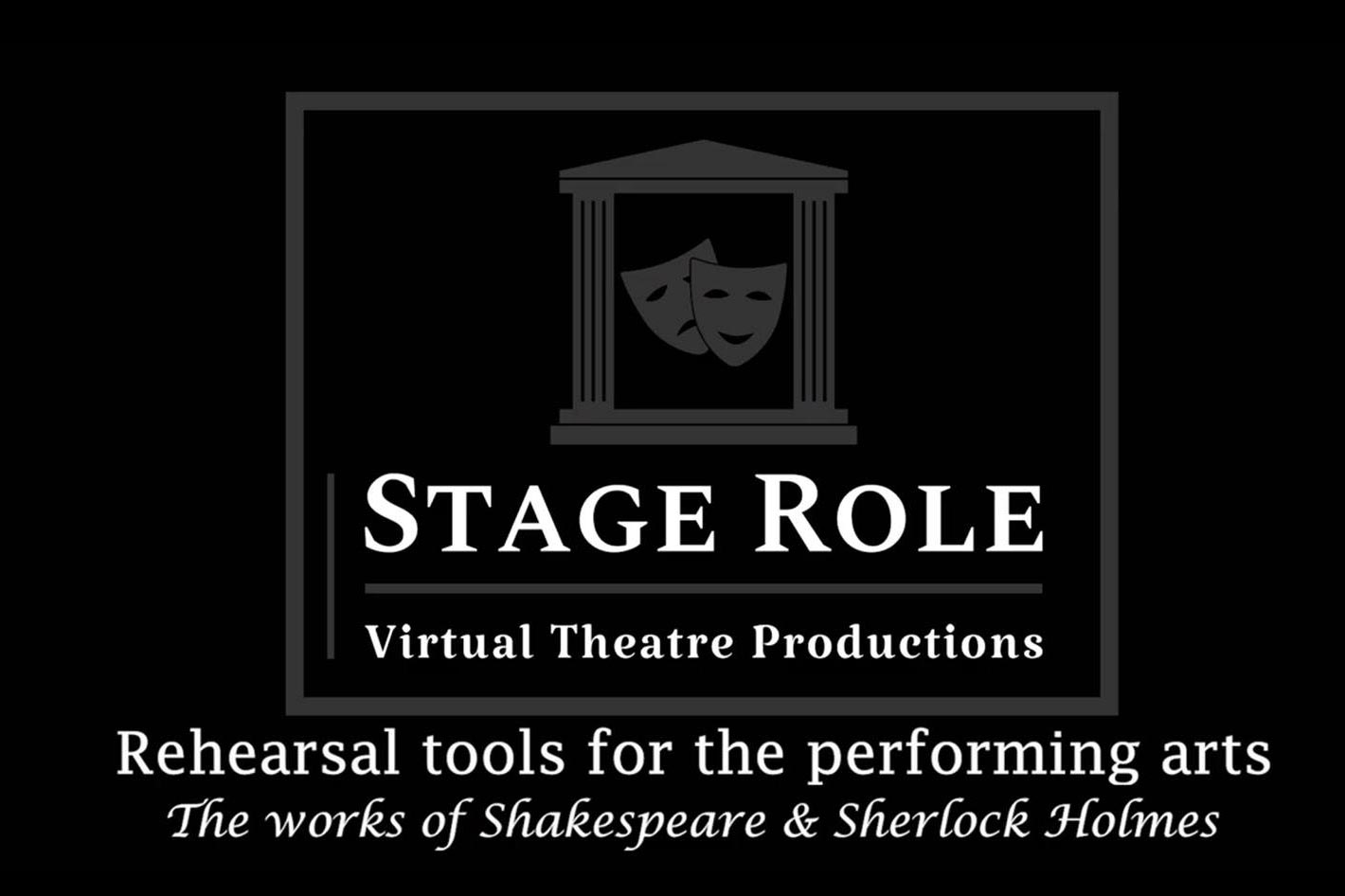 “There’s no business like lockdown showbusiness”. That’s how Paul Watson presents StageRole, a project that is all about making acting from home a more simplified and engaging experience during the lockdown and beyond. It’s, he says, “a pioneering new way to perfect your performance and make learning your lines a lot more fun. Whether your background is theatre, TV, movies or voice over, we’re pioneering new ways to focus your talent.”

Paul Watson, a fan of space sims for many years, plays Elite Dangerous since crowd-funding and is Producer at HCS VoicePacks Ltd. HCS has been working with StageRole, to co-develop software that’s capable of delivering a full-blown theatrical play to actors so that they can practice their lines in an immersive set of Shakespeare & Sherlock Holmes plays, during this Work From Home period and beyond.

The StageRole software is in development stage, with a release planned for this Summer, along with an example of what it allows users to do: Sherlock Holmes “A Study In Scarlet”, a play where the user can play any role. A prologue scene for Sherlock Holmes, produced by actors, for actors, shows what’s possible: by choosing a role and reading their part from the script, with voice recognition and a fully interactive role-playing story, take yourself back to the theatre, at home! From start to finish, choose your own role and a perfect your performance! 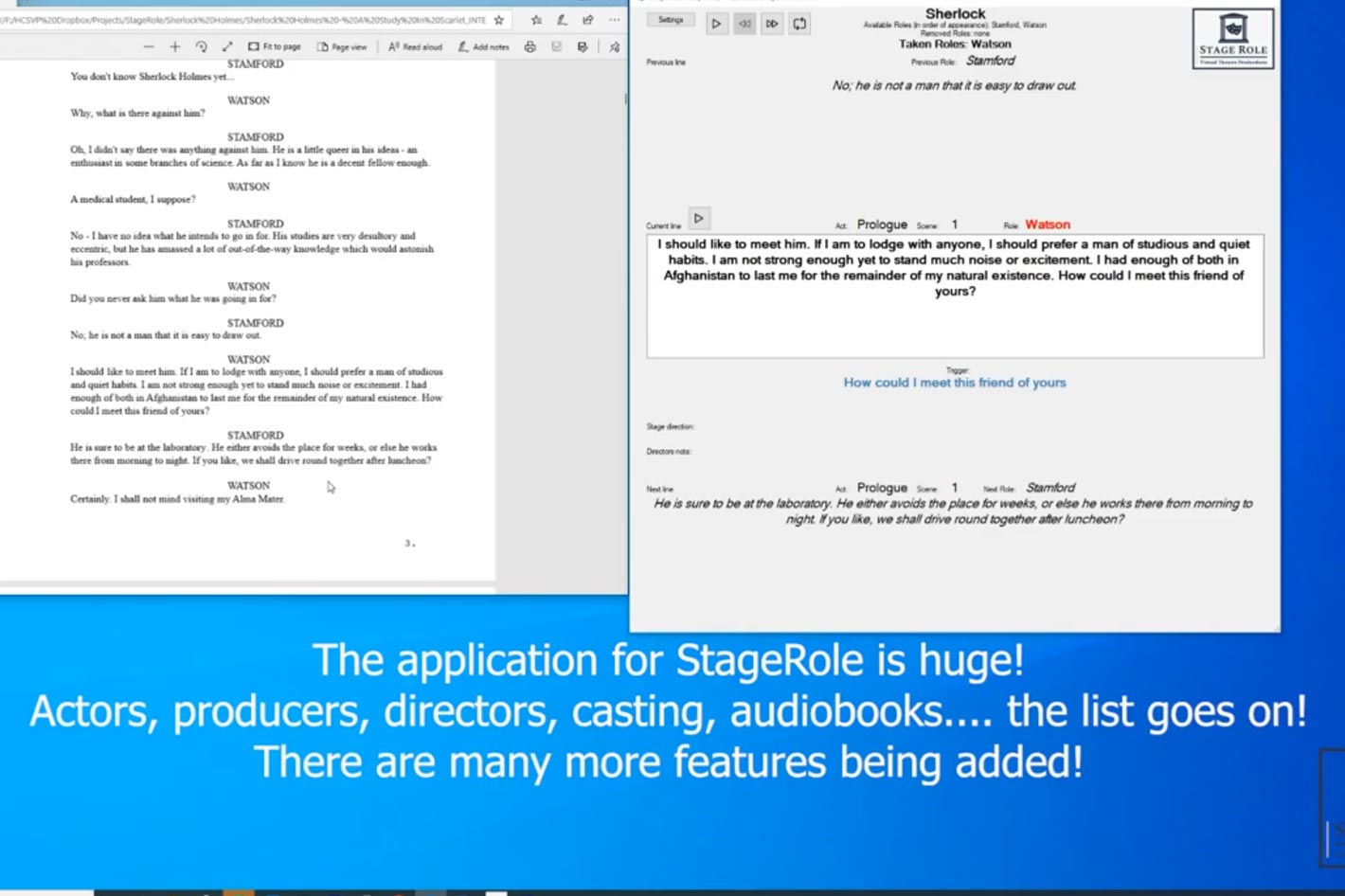 Replying to a comment in YouTube, Paul Watson said: ”You get to play any role, you get to place any audio, including your performance – You even get to export your performance / make a showreel. When we have plenty of Shakespeare plays produced, you can perform any role, and practise any script, in its entirety.”

StageRole is the world’s first voice recognition rehearsal and self-taping app for actors. Watson says that “there is MUCH we can develop for StageRole. For now, here’s just a few StageRole ‘Voice control” software features:

StageRole is the result of six years of development and work with actors as William Shatner, Brian Blessed, Marina Sirtis, Tom Baker, Brent Spiner and many others. The team that works on StageRole have produced many products for computer gaming with one key element – Immersion. 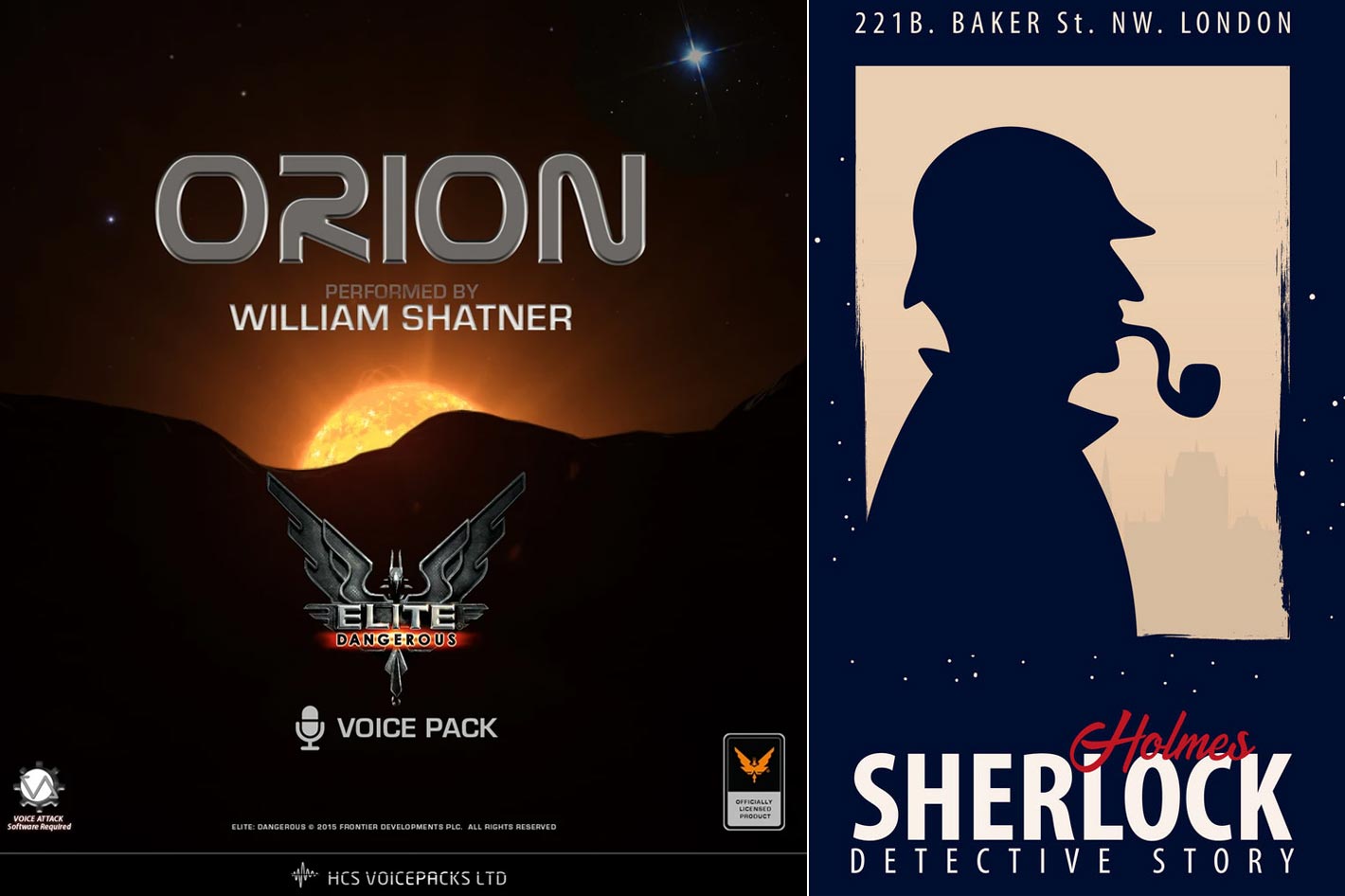 From space sims to Sherlock Holmes

Gamers know the name HCS VoicePacks, a software which uses scripted voices as command and chat voices for virtual crews in space sims as Elite Dangerous or No Man’s Sky. The HCS products give users the experience of being on stage, in a theatre, a movie… or the cockpit of a spaceship with Captain Kirk at the helm and Lieutenant Commander Data controlling systems.

The newly developed software is the result of lockdown. Many actors are stuck at home or stuck somewhere. With that, production for actors globally has slowed almost to a halt. So, said Paul Watson last May, “we are trying to do something more about that than just making videos with fellow actors – we’ve found that our development over the last 6 years has led to a spin-off product that we can develop into a product that you can use at home. It has some extraordinary features and we’ve tried a rudimentary version of it already. It’s very exciting!”

Much like how the voice packs work, StageRole is driven by the user’s voice. The team behind the project believe “it is groundbreaking tech and will help a LOT of stuck-at-home actors. We’ve already begun production on Sherlock Holmes with a great cast, all of whom have been trying to work from home – Soon, we’ll be releasing the play!  We’re also currently working on Shakespeare, so fans and actors can get a real feel for theatre again very soon.” 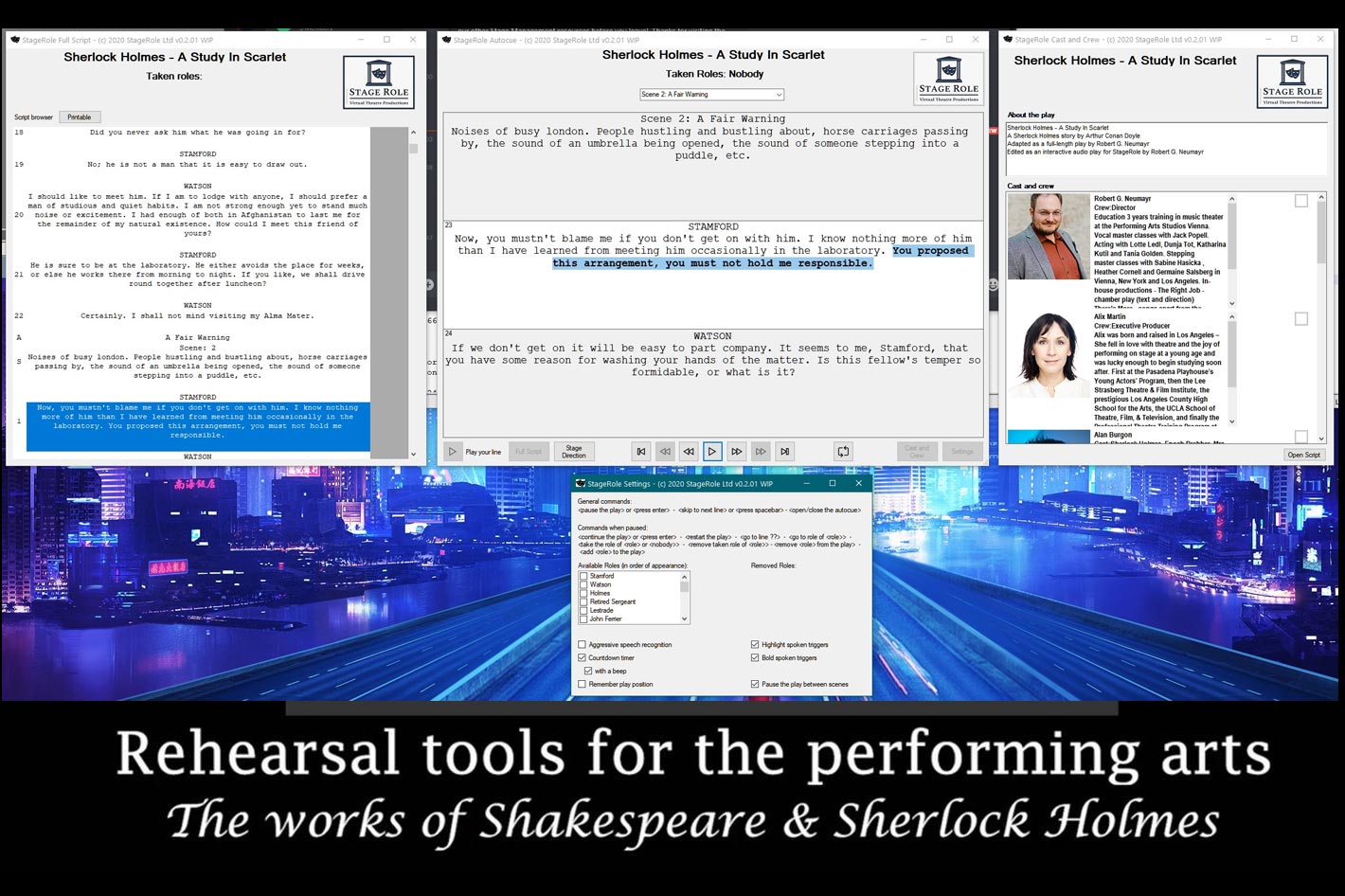 The StageRole software will continue to be developed after the initial release. Here are some of the features in development, to add to the list of features listed above:

One final note: Paul Watson says that “we’re building StageRole for actors, with actors, for everyone, and it’s going to be free for a while too!” 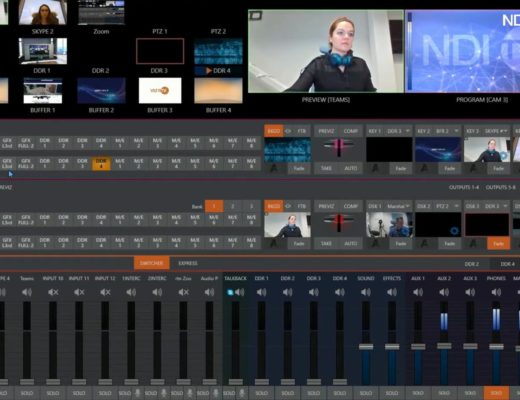 Now, you can bring Team callers as sources into your live video production, and that’s all possible thanks to... 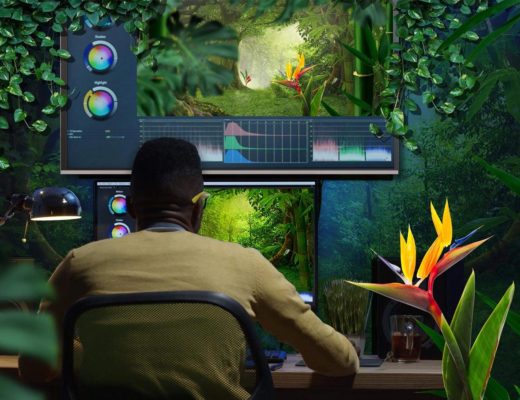 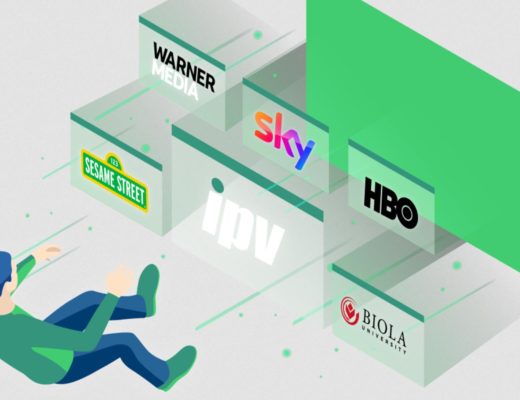