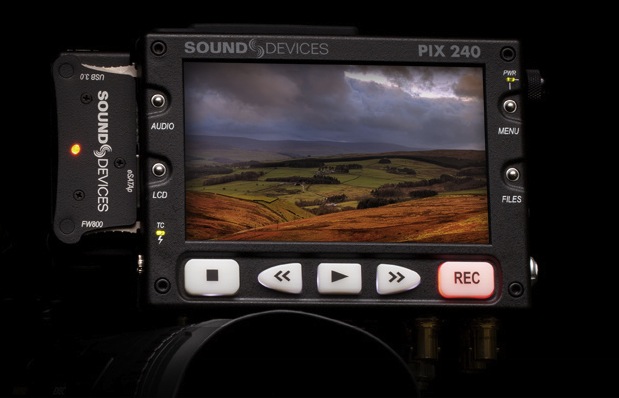 Many people know Sound Devices as a renowned manufacturer of very high-end audio equipment for field production. They make some of the best (and higher-priced) field audio mixers and recorders available on the market, and do so since 1998. Later, Sound Devices began selling high-end USB audio interfaces, one of which I reviewed. Those items have frequently been used for audio-for-video for over a decade, but only in April 2011 did Sound Devices announce its first two video products, the PIX 220 and PIX 240 HD video recorders that offer several types of ProRes422 (Apple) and DNxHD (Avid) códecs. In this article, I’ll cover many details about these two recorders as of firmware 1.07. Yes, in less than a year, there have been seven firmware updates!

As I have stated in prior articles: File-based portable HD recorders exist nowadays basically for two reasons: Either to make a superior recording than that could be possible inside of a camcorder's own recorder, or to record the output of a video mixer (“switcher”), whether be it superior or equivalent quality to what might have been recorded internally in the cameras used. When I say superior, I mean either a 10-bit recording instead of an 8-bit recording, a 4:4:4 or 4:2:2 recording instead of a 4:2:0 recording, a less compressed (or uncompressed recording), or a less lossy recording. When I say that a recorder goes “up to” 10-bit, what I mean is that it records with 10-bit quality as long as the source being fed is truly 10-bit, not a 10-bit signal which has been derived from an 8-bit signal, as I have covered in more detail in several prior articles. When fed a signal that is 8-bit (over HDMI) or 10-bit derived from 8-bit (over HD-SDI), the recorder makes a 10-bit recording that has 8-bit quality.

Those of the items that require more detail, I’ll cover ahead in this article.

As I have covered in previous articles, unfortunately most current HD cameras have a hostile HDMI output for producers who prefer progressive video and process it as such throughout the workflow. When I say “hostile”, I mean that even though they could have easily designed the cameras with the option to output true progressive 1080 video at 23.976p, 25p, or 29.97p, very few manufacturers currently do so. To avoid workarounds in post-production (as I have covered and continue to cover in my PsF missing workflow series), if you have a camera which gives you a hostile HDMI output, the best andidote is to “nip it in the bud” as early as possible in your workflow. Fortunately, both the PIX 220 and PIX 240 offer reverse telecine (pulldown removal) even from HDMI sources for simple 2:2 pulldown (used for 25PsF and 29.97PsF) and for the more complex 2:3 pulldown (used for 23.976p-over-59.94i, commonly but imprecisely called “24p-over-60i”). While I had the loaner PIX 220 from Sound Devices (which I already returned), I did several tests with several cameras. The following test is a recording of the 1080PsF29.97 HDMI output of the Canon XA10 camera (thanks to Rafael Alarcón and Jorge Koechlin of AutoMundo.)

I was really hoping to be able to test the PIX 220 with the Sony NX70, but I still haven’t received the review unit from them. 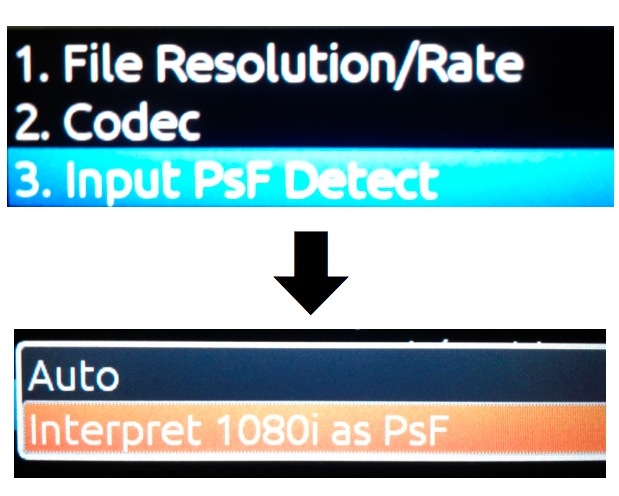 Menu command of the PIX 220 or PIX 240 where you ask the recorder to interpret 1080i as PsF, and therefore make a true progressive recording. Adiós to the PsF nonsense caused by the camera's hostile HDMI output! Handheld screen shots courtesy of Diego Pocoví.

Although the Canon XA10 does offer a mode for 1080p over HDMI, it does not agree with the EDID on the PIX 220 recorders. After discussing this with Sound Devices, the conclusion is that the 1080p output offered by the Canon XA10 is exclusively 1080p59.94, which the PIX recorders do not accept, so the XA10 falls back to 1080i (or 1080PsF, depending upon the situation).

To my knowledge, as of publication time of this article, the PIX 220 and PIX 240 are the only dockable ProRes422 or DNxHD recorders on the market with these reverse telecine (pulldown removal) features over HDMI. If anyone reading this article knows of any other, please contact me or comment below.

Unfortunately, some other external HD video recorders from some other manufacturers (and all AVCHD cameras so far to my knowledge) use the old, weak FAT32 formatting. FAT32 dates back to the mid 1990s and limits the maximum file size to a little under 4GB each, which forces you (or a camera or recorder) to create sequential files for long clips, which is an unnecessary mess! As stated in prior articles, I applaud Sound Devices for choosing to use the UDF format in their PIX recorders. UDF allows for much larger files, so long clips can be recorded in a single file per clip. (Sony is already offering the option of using UDF formatting with some of its non-AVCHD cameras.) As stated by Sound Devices: “UDF volumes are cross-platform, being directly mountable, readable, and writable in Mac OS and Windows.” Only formatting (in some cases) needs to be done by the PIX recorder.

Conclusions about the PIX recorders

I very much appreciate the fact that Sound Devices chose to use a modern formatting scheme, to include a matte onboard monitor, and to combat the problem of hostile HDMI outputs before recording. Of these three benefits, as of publication time, the first is rare (AJA uses HFS+, which is also very good and modern, although requires a utility to be used with Windows, while UDF is directly compatible with both Mac and Windows) and the third is currently unique to Sound Devices’ PIX recorders to my knowledge. As a result, if you want to record true progressive to a ProRes422 or DNxHD códec today from a camera whose HDMI output is hostile (i.e. almost all HDMI camera outputs), one of the PIX recorders may be your only option. If you want to record true progressive to a ProRes422 or DNxHD códec exclusively from a camera which offers HD-SDI, you have many choices of recorders which can handle PsF properly and convert it into true progressive. However, few of those have some of the other features indicated above in this article. Standby for my upcoming roundup of such recorders. If you’d like, you may subscribe to my mailing list here.

I say “future products” because Sound Devices has already stated that neither the PIX 220 or PIX 240 will ever be able to record any of the following formats:

For full specs and other information on the PIX recorders

Visit the manufacturer’s dedicated web page on the PIX recorders.