Some highlights of what Sony is showing 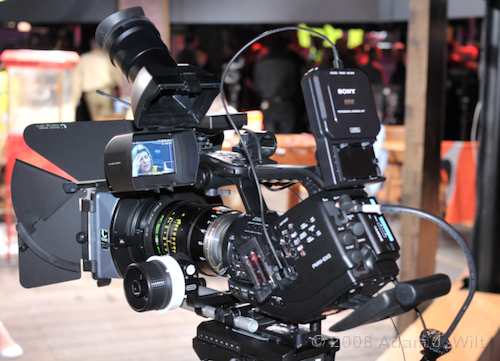 Sony’s Juan Martinez gave me a night-before-the-show tour of the Sony booth (really a miniature city; “booth” doesn’t do it justice), and here are some of the highlights from a camera operator’s perspective.

The EX3 will be to the EX1 what the HDV S270 is to the Z7: a higher-end variant using the same basic imager and architecture. 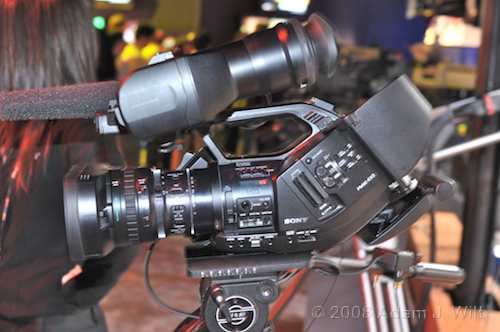 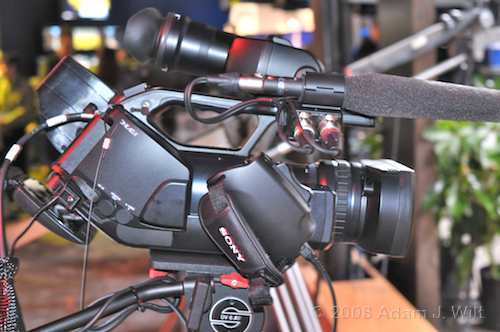 Note the “head brace” sticking out the back, and the extendable shoulder pad 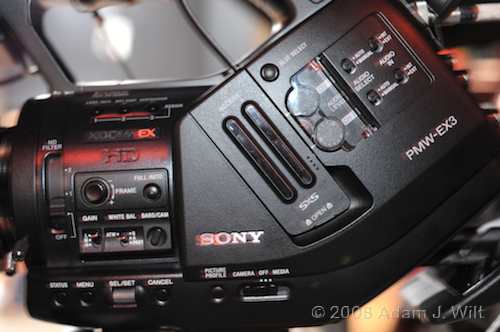 close-up of left-side controls; there’s a “frame” dial to set frame rate (no in-shot ramping, though; gotta save something for the F23 and F35!) 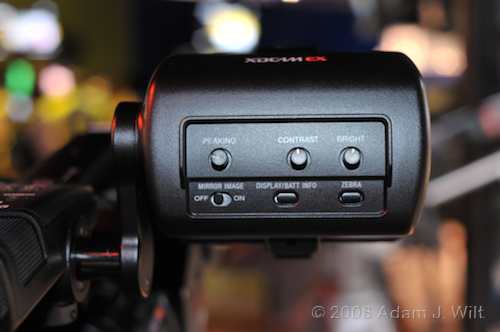 The front of the EVF has a real, honest-to-goodness variable peaking control 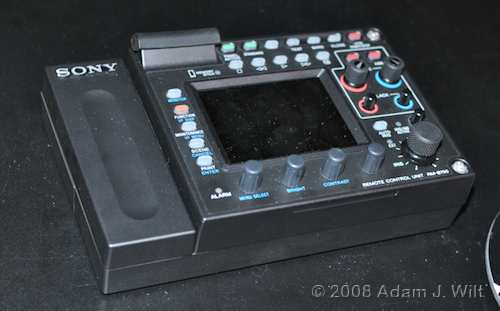 One of the remote panels that the EX3 works with 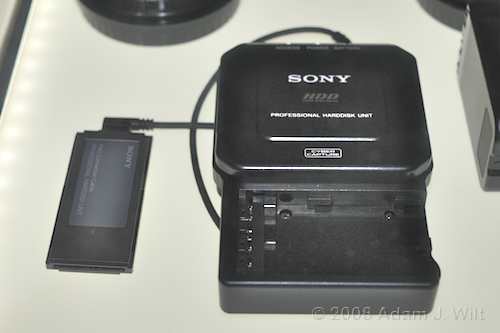 The HDD unit with SxS “connector” on a thin cable 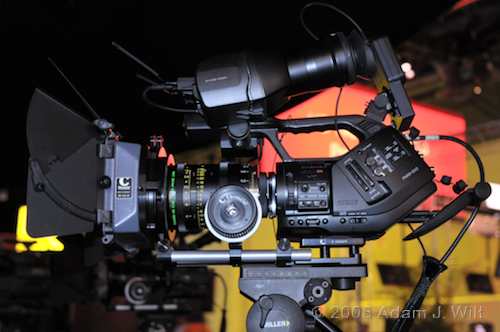 Next: there was more than just the EX3 on display…

The 50Mbit/sec, 4:2:2 variant of XDCAM. Sony is showing it with a dockable DVB/ASI encoder for ENG featuring low latency and tweakable bit-rates (18 Mbit for robust multipath work; 25 Mbit or higher where line-of-sight paths are available; and with a dockable SxS recorder to supplement its on-board XDCAM disc recorder.

Sony also demoed a UK-developed WiFi link to integrate newsroom systems with field production. The newsroom can create a slug in an iNews or ENPS rundown; a reporter can call up the slug and its metadata on his mobile phone. The reporter can dump this info to the PDW-700 via a WiFi adapter; the camera then sets up the next batch of shots with the slug’s name embedded, e.g., if the slug is called “froggy” then the camera will record clips names froggy_001, froggy_002, etc. until it’s given new data to work with.

Even better: the reporter can view proxies created by the camera on a media browser on his phone. Proxies are available within a few seconds of being shot; they can even be streamed live over WiFi (with about a five-second delay) while the camera operator is still shooting them, so the reporter can mark events, tag NG shots, and add logging notes in real time. All this metadata can then be sent back to the newsroom, so that as soon as the footage arrives back in house, it’s already tagged (thus searchable and retrievable as soon as it hits the server) and ready for cutting.

The phone interface looks a bit fiddly for rough-and-tumble work (too many small targets to tap on a tiny Windows Mobile screen), but it’s been in development with a number of UK and US broadcasters for the past year, so who am I to judge? 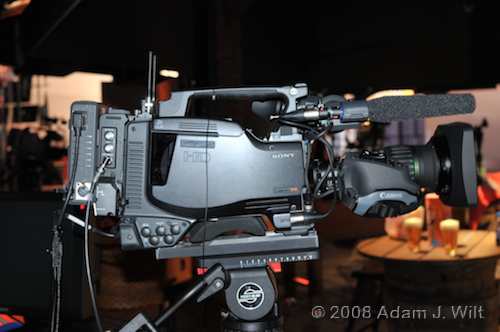 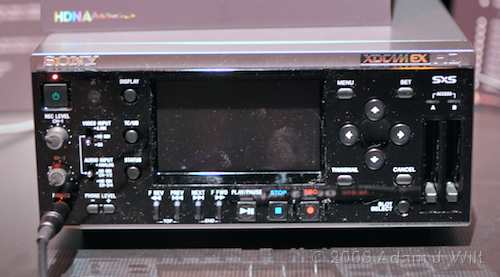 Prototype EX30 with the dust of booth construction upon it 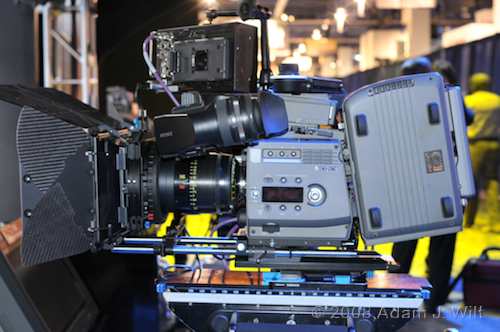 F35. Looks just like an F23, except for the fatter lens

The F35 and F23 (with a firmware upgrade) can use a new Arri remote control to set up and operate camera parameters, including both manual and programmed speed ramps. The F23 can ramp all the way to 60p, while the F35 can “only” go to 50p due to the greater number of photosites on the CCD, which makes high-speed readout “challenging”. 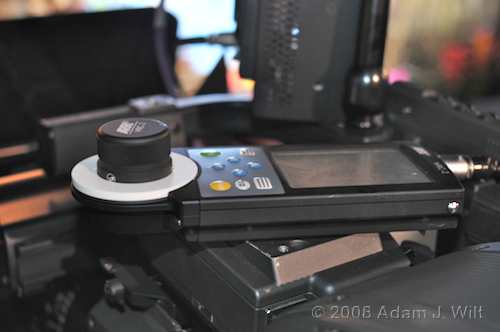 Arri remote for live speed ramping (among other things)

One F23 shows off a new optical link, allowing the SRW-1 deck to be remotely placed while the camera maintains all the advanced functionality that previously required the deck to be docked. 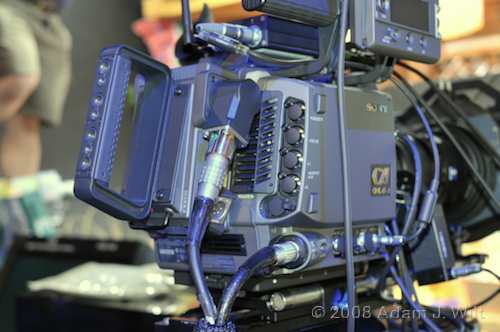 The F35 will ship later this year. Price has not been determined; it’ll be higher than the F23’s.

A 42″ broadcast-quality LCD display. Price: TBD. Juan says, “Figure a thousand dollars an inch!” Sony is positioning it for color-critical evaluation monitoring. Looked pretty sweet; I’d show you a picture, but (a) I didn’t take one, and (b) you can’t evaluate monitors on a web page anyway: it just looks like a box with a picture on it. All I can say is that pictures looked very nice and the blacks were satisfyingly deep. 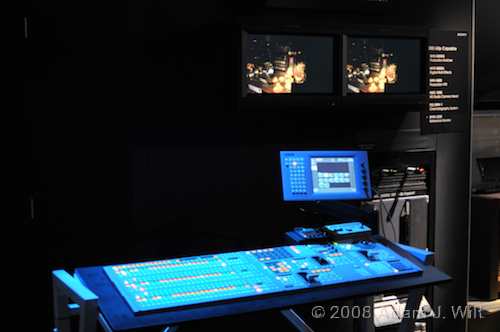 Yes, it’s really this blue… in the booth’s lighting, at least.

I’ll have to come back when the show is open to see this broadcast camera’s OLED viewfinder in operation. 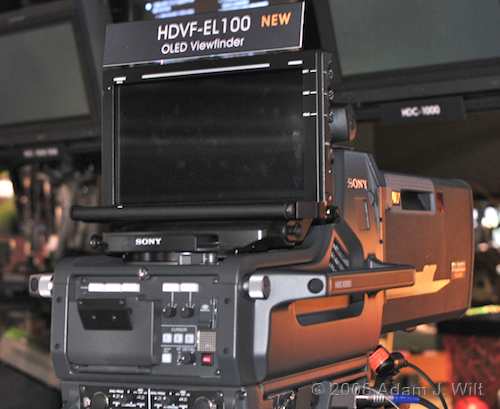