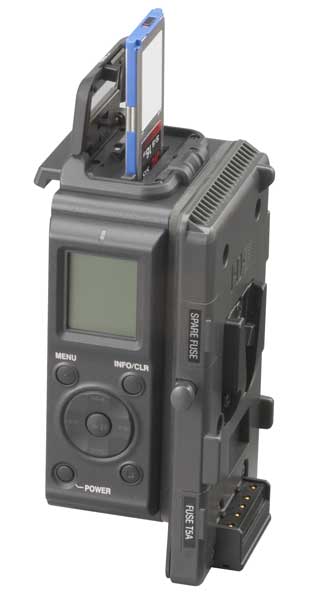 An interesting announcement that emerged from IBC this year is the news that JVC will be supporting Sony’s XDCAM EX long-GOP MPEG format as well as SxS solid-state media cards. Initially the format and media will be implemented in JVC’s KA-MR100G docking recorder accessory for ProHD GY-HD200 and HD250 camcorders. Read on for details…

The media recorder requires an accessory adapter to work with those shouldermount cameras, future products will connect directly to the MR100G recorder unit. You can see it mounted on a camera via this link. It will feature a single SxS media card slot. The new JVC recording unit is expected to be available in March of 2009, and priced under $3,000 USD. At this time there appear to be no specific details on what XDCAM variants the recorder will support, if any. Assuming that they will support 35Mbit VBR, I personally hope they will consider the inclusion of 25Mbit XDCAM CBR (essentially HDV), and perhaps the new 50Mbit XDCAM HD422 option recently announced in the PDW-700 camcorder. In addition to the recording unit, JVC also appears to be developing their own branded SxS media (or at least re-branding Sony media).

JVC’s support is a very interesting development, and should help expand adoption of Sony’s Long-GOP MPEG format. Despite the criticisms of XDCAM and HDV, it has continued to expand in the industry. It’s certainly not perfect, but seems to be taking on the “workhorse” role in video production. I’ve shot with the XDCAM EX1 fairly extensively and shoot/edit HDV material on a regular basis. Like any codec or format, there are compromises. But it works surprisingly well for a wide range of applications. JVC is smart to adopt an already-developed solid-state option that users have embraced. There’s no sense in reinventing the wheel, and the integration of XDCAM EX and SxS media can only help strengthen their userbase and allow users to use JVC camcorders with existing XDCAM workflows. Well done, JVC.

Beyond their support of XDCAM, JVC has also announced a hard drive recorder unit with a unique twist. The MR-HD100U hard drive unit records DV and HDV in a variety of native NLE formats, including either QT .mov or .m2t files in 720p 24/25/30/50/60 and also 1080i 50/60 frame rates. The unit also supports recording directly to .mxf format files in 720p 30 and 1080i 50/60 for Avid editing systems. The twist that this unit provides is a wireless interface that enables shot-logging and editing of metadata on the fly. This is very similar to what the Firestore FS-5 unit provides. The MR-HD100 HDD recording unit is expected to ship this month for under $2500 USD.