1080 60p, Variable ND, and a load of great features found in this versatile hand-held camera.

Just when you thought 1/3 inch cameras were on the way out, Sony goes ahead and makes a versatile hand-held camera with quite a few surprisingly good features.  From professional codecs, great slow-motion capabilities and a ND filter upgrade that really needs to be included in all of Sony’s cameras.

When Sony asked if I would like to review the Sony PXW-X180 I thought why not.  I mean, I haven’t used a 1/3 inch camera in awhile, and shooting with any new camera is fun.  So I researched it and figured the camera would be a general upgrade to the 1/3 camera market.  I was in for a surprise.  The PXW-X180 is way more than “just an upgrade.”  The features on this camera, often found in more expensive cameras, make this a serious contender for people who need an all around camera. 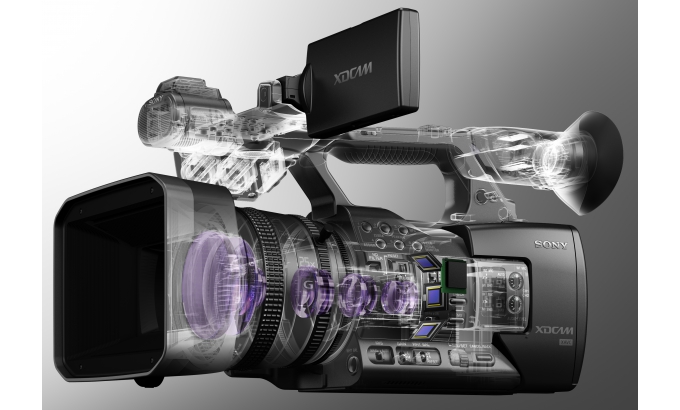 The OLED monitor is fu#$ing amazing. The 0.5 screen has the clarity of 1024 x 768, add in the OLED brightness, contrast and you have a screen that you can use outside in bright daylight.  The high resolution screen helps nail manual focus even without Sony’s red focus assist feature turned-on.  Speaking of focus, the PWX-X180 has a dedicated focus zoom button and a focus meter that you can see on the screen.  For me, focus meters are not a great help, but for some all of these features will be a bonus.  When using the OLED screen don’t expect the battery to last forever.  At best you may get an hour and some change from the included battery.  Buy the bigger batteries and get a handful of them too

Speaking of on-screen goodness.  Sony allows the option to put three different video scopes on the bottom right of the screen.  The Vector scope, Waveform, or a Histogram can be seen on screen by the press of the video signal monitor button.  This is a huge help with exposure and color.  The ease of use by including the function with a single button is appreciated.

The G Series Fixed 25x zoom lens, for a single lens camera, is wide and long.  In 35mm terms it rounds out to 26mm – 650mm.  The lens also has three independent rings with end-stops for each.

High resolution, high sensitivity, low noise, and wide dynamic range what more could you ask for? Well, one of the first things I did when this camera arrived was find a wide dynamic range video profile.  I wanted the flattest picture profile I could find because I knew I would take the footage through DaVinci Resolve and push/pull the hell out of it.  I wanted to see what XAVC could handle.  What I learned is there is a bit of information in the shadows that can be pulled out, however one has to be careful of introducing noise when lifting the shadows too much in Resolve.

The sensitivity of these sensors is good.  I shot quite a bit at 12db gain I was very satisfied with the noise level.  1/3 inch sensors have never been known to be super sensitive. With the PWX-X180 Sony does there best to give a shooter the sensitivity they can give.  It’s good, but not exceptional. This leads me to what I found to be great.

The codecs on this camera are one of the many shining elements.  The addition of high quality XAVC Intra and XAVC Long GOP recordings onto SxS cards at 111 Mbps.  Impressive.  The PXW-X180 also records in MPEG HD 420 35 Mbps, AVCHD and DV, offering a wide range of flexibility and savings on SxS cards.  One thing that perplexed me with this camera was the option for proxy recording.  This seems like it would be a great feature, but with laptops and computers now it seems like a wasted feature.  It’s not like the XAVC is too big to open on a laptop, but I suppose there are professionals out there who might use it.  Me? not so much. Below you will find a chart with the Recording Formats found on the PXW-X180.

The PWX-X180 has slow-motion capabilities and I used them as much as possible. 1080 60p proved to be my go-to speed. I thing I love about Sony’s S/Q function is the slow-motion video is recorded that way in camera. I’m sure there are shooters out there who want just the opposite, which is fine, but for me I want my slow-motion to be slow-motion and Sony delivers.  For PAL shooters, this camera also does 1080 50p.

There is a way to shoot 720 120fps. Here’s the thing with that function, the already small sensors “window” the frame to get the 120fps making the noise more prevalent.  It’s there as an option, but I decided to stick with the 1080 60p for my uses.

This is one of those features that needs to be added to all cameras.  It’s Neutral Density genius.  Shooters can chose from four conventional mechanical ND filters or a linear control dial.  With the spin of on-camera wheel, I don’t know what else to call it,  you can quickly and smoothly change the Neutral Density. For example, you can smoothly change your ND from 1/4ND to 1/128ND.  I cannot say how great this feature is. I used this feature more than then Iris wheel.  It’s especially useful when shooting outside where one might want to keep the depth of field shallow.

“PLAY” from Brian Hallett on Vimeo.

In the test I made a video show-casing the camera’s beautiful 1080 60p.  It features one of my more enthusiastic cats and his joy of play.  I color graded it black & white for two reasons: 1. the subject lends itself to black and white. 2. It reminds me of earlier film “Henri.”  Shot with Sony’s XAVC-I codec at 60P.  Colored and pushed/pulled in DaVinci Resolve. All the footage was shot at +12db gain.  The lighting = an open window on a cloudy day.  Music = “Kings” by Ryan Taubert.  Plus, I feel like there are quite few video reviews out there that show off the camera’s color and contrast.  You can fine Uli Mors review here: http://www.sony.co.uk/pro/article/broadcast-products-pxw-x180-xdcam

There are a couple of things I wanted to review, but didn’t have the option to review.  One of those was the Multi Interface Shoe (MI Shoe).  It seems like a great way to connect a wireless microphone or top light without having to use cables.  Of course, the MI Shoe will only work with Sony gear. For example, the UWP-D11 or UWP-D12 wireless microphone, and can be used without an XLR cable.  In the end, this is a great all-around camera.  While not exactly an inexpensive camera, one will not need to buy any accessories to make this camera more useful. The S/Q motion, the OLED screen, and the Variable ND filter make this camera one of the bests for all-around work.