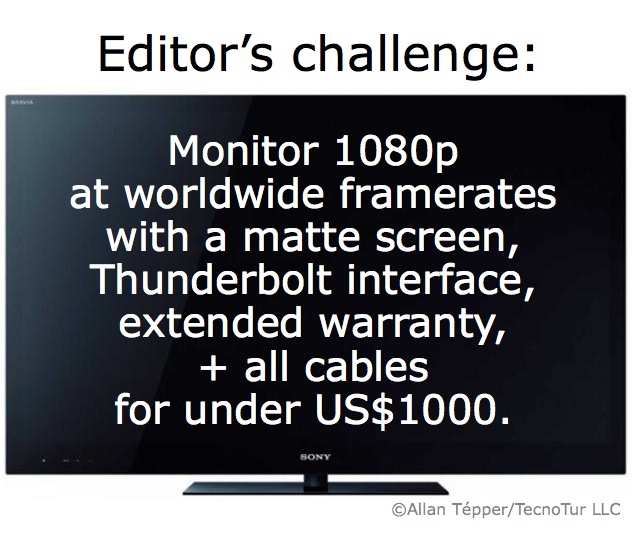 When Miami-based PRODU.com set out to choose the key components for a new video editing system, they already knew that they’d be purchasing a 2012 iMac and a Thunderbolt drive. However, since most HDTV sets sold in the U.S. are unfortunately segregated, what was more challenging was to achieve a good 1080p video monitoring solution at worldwide framerates and with a matte display, all for under US$1000 including an extended warranty, professional Thunderbolt a/v interface, and cables. The monitor they picked is unusual for the United States. Learn about which monitor, which interface, and why ahead in this article.

Even though most professional video editors would love to have an HP DreamColor or other pro monitor (see related articles at the end of this one), some simply cannot afford it. In that case, the next best thing is often to choose a consumer 1080p monitor or HDTV set which is guaranteed to accept all standard worldwide framerates (i.e. 23.976p, 24.000p, 25p, 29.97p, 50i/p, and 59.94i/p), 1:1 pixel-by-pixel monitoring (without overscan), a matte screen (for those of us who prefer it that way), and an appropriate output interface between the computer and the monitor.

Segregated HDTV sets and why PRODU.com chose the Sony KDL–40BX420E

As I covered back in this 2008 article, many consumer HDTV sets currently sold in the United States are unfortunately segregated, which means that they reject signals at 25p, 25PsF, 50i, or 50p. When this is done, it is often by design in an attempt to avoid grey marketing. Some accept 23.976p and or 24.000p but don’t display a proper cadence. In order to have worldwide compatibility, PRODU.com needed a monitoring solution that would cover any standard framerate used worldwide, as long as it came in within budget and met other requirements. PRODU.com also knew that not all HD monitors that accept 23.976p and/or 24.000p handle it with proper cadence. Fortunately, in his review of the segregated USA version of this monitor (KDL–40BX420, without the “E” suffix), CNET senior editor David Katzmaier stated:

The inexpensive Sony KDL-BX420 series evinced good performance for an entry-level non-LED-TV, with deep-enough black levels and accurate color in mid-bright areas. It also, surprisingly for a 60Hz TV, handled 1080p/24 cadence properly, and its matte screen is a boon in bright rooms. Its styling is clean and its remote is among the best in its class…

David must have been referring to a 23.976 cadence (or to both 23.976 and 24.000 cadences) since I tested both 23.976p and 24.000p sources, and they both looked proper via the HDMI input. It is not clear whether the KDL-BX420 and KDL-BX420E play 23.976p at 47.952 fps by repeating each frame (as 24 fps films are seen in traditional movie theaters at 48 fps via a double shutter) or whether it is tripling the original 23.976p and displaying at 71.928 fps, but whatever it is doing, it looks good and proper via the HDMI input. If desired, you may read David’s entire review here. Just realize that David reviewed the segregated USA version.

Monitoring equipment chosen by PRODU.com (including the Thunderbolt a/v interface)

Here you’ll see which video monitoring equipment PRODU.com chose and its approximate street price as of publication time of this article:

Total US$834 (not including shipping or possible State sales tax)

Why purchase a third-party warranty for the KDL–40BX420E in the U.S.

Especially if you plan to use it in the United States, the purchase of a third-party warranty for the KDL–40BX420E is highly advisable since Sony U.S. does not officially sell or handle this model. The ±US$50 third-party 2-year U.S. warranty covers that.

Although according to Sony’s published specs, the KDL–40BX420E requires a 220–240 voltage source, the supplier where PRODU.com purchased it assures that it really works fine with the full range of 110–240 volts, so no external transformer is required. In fact, inside the box was a plug adapter for use with a standard U.S. 110–120-volt outlet. The digital internal tuner is for DVB (not ATSC), so it won’t work for over-the-air DTV in the USA, but that is not the purpose in an editing system, and it will certainly work when connected to a set top box in the U.S. (AppleTV, Blu-ray player, cable box, DVD player, GoogleTV, Roku, WDTV, etc.). The KDLR–40BX420E’s analog internal tuner is for PAL B/D/G/I/K/L (Argentineans, Paraguayans, and Uruguayans will notice the lack of PAL N, while Brazilians will notice the lack of PAL M), but it doesn’t matter for the same reasons. Via the HDMI and analog video inputs, the KDL–40BX420E can receive NTSC and NTSC-derived signals, as well as PAL and PAL-derived signals. However, 23.976p and 24.000p work only via the HDMI input.

Many editors may prefer a video monitor that is closer to a 24-inch diagonal size as opposed to 40-inch like the KDL–40BX420E. However, PRODU.com actually prefers the larger 40-inch size of the KDL–40BX420E since they plan to mount it further away from the editor, on the wall behind the editor’s desk.

Why did PRODU.com choose the UltraStudio Mini Monitor?

PRODU.com was only interested in monitoring (output), not capture (input), since all of their new acquisition is tapeless. Even their older footage was DV25 and HDV, both of which can be captured via IEEE–1394 (Firewire) and therefore doesn’t require a pro interface for native capture. If PRODU.com ever needed to capture those formats, they could simply acquire an IEEE–1394>Thunderbolt adapter. PRODU.com chose the Blackmagic UltraStudio Mini Monitor both because of its low cost, compatibility with all standard worldwide framerates, and possible future use with DaVinci Resolve, which exclusively works with Blackmagic interfaces. (See my recent article UltraStudio Mini Monitor works with DaVinci Resolve, but should you use it for serious grading?)

Why I write framerate as a compound word

Since a reader wrote in to question my spelling of the word framerate, I am adding this sidebar to clarify my position. To my knowledge, the word framerate doesn't (yet) appear in any dictionary. However, the purpose of any dictionary (in any language) is to document both the spelling and meaning of existing words. The purpose of a dictionary has never been to prevent the creation of new words. That’s why all good dictionaries are constantly being updated to document the birth of new words, which are born in use, not in the dictionary. Many of the new words which are born every year are compound words. Here are a few examples of some compound words:

Like all compound words, they were born in use out of logic, and then they were added to the dictionary. I am not the first to write framerate as a compound word as you will see if you do a Google search for “framerate” including the quotation marks. As I check right now, there are 9,310,000 uses of it as a compound word, as opposed to 22,200,000 as separate words. There are more uses as separate words than as a compound word because with 9,310,000 uses to date, it is obviously fairly new, but certainly quite popular already. As I stated at the beginning of this sidebar, the purpose of any dictionary (in any language) is to document both the spelling and meaning of existing words. The purpose of a dictionary has never been to prevent the creation of new words.

Standby for an upcoming article where I suggest a prosumer version to Sony, similar to what often happens with Sony consumer cameras which often become the basis for prosumer ones.