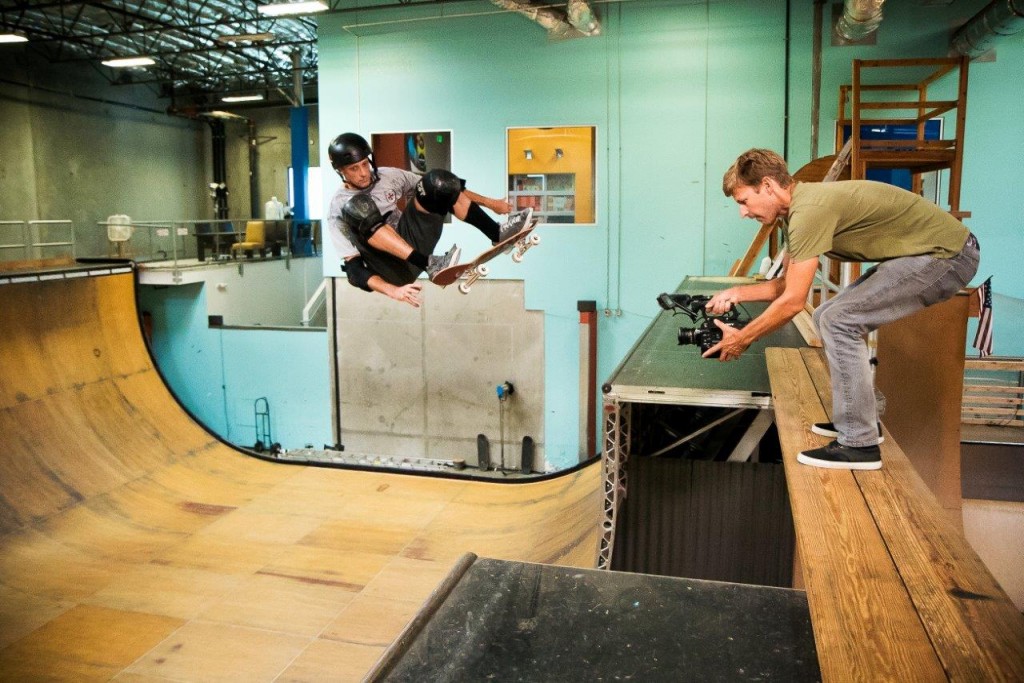 As a lifelong skateboarder, the Sony brand has always been rooted in our community.  Skateboard kids were brought up shooting videos on Sony gear, especially the VX1000, which was the iconic skateboarding camera of a generation.  Many people all around the world still use that camera for its look, as well as its long history associated with the skateboarding lifestyle.

I too began filming on a Sony, when I was 14, starting with the Handycam line and recently moving up to a combination of Sony’s latest professional cameras to capture skateboarding in its true element.  My newest camera of choice is the PXW-FS7K.  I’ve had a little bit of proper professional training through school, but a majority of my skill has come from learning to look at my footage and trying to change it and make it better going forward.

Currently, I run 900 Films, which is Tony Hawk’s production company.  Tony started it because he wanted some control over the videos of himself that were getting out to the public.  At the time, there weren’t many production companies that really understood skateboarding and he felt it was an opportunity to do a better job portraying the sport and also work with other skaters who had experienced the same frustrations.

A lot has changed since we began 16 years ago. For example, DVDs were a big part of our initial business. We had several best-selling discs on trick tips and capturing tours, and we did a lot of television work.  When we began, we never really intended to create scripted programming or web videos, but as technology evolved and the sport changed, we became committed to making action sports as proper as possible, by working with the actual athletes.

For the past four years, a majority of our focus and attention has been on web videos, but we been remain dedicated to the same principle of capturing action sports from the participant’s perspective.  Our main platform is YouTube, where we run The Ride Channel, which just recently hit the one million subscriber mark.  In addition to the YouTube channel, we have a website, TheRideChannel.com, and we partner with Complex Media in New York to create content for the channel.  In a given year, we post about 800 videos, a third of which we create in-house.  Because we are continually making content, every single day, it is important to have tools that can keep up with us.

The FS7 is the secret weapon in our arsenal.  While it is evident that the camera and its lens are amazing for interviews, and there are many people using it for that purpose, I feel that very few people are using it in the same way that we do – to shoot skating.

The FS7 camera and its 28-135mm lens offer some pretty exciting features that continue the long-standing tradition of skateboarding and Sony going hand in hand.

Growing up filming, the newer, better products were always enticing to me, but not always entirely cost-effective or necessary.  Our company was quick to get into HD, but we hadn’t made the jump to 4K yet – until now. When I first read the specs for the FS7, I said “wow that seems like an amazing camera for the money.”  I had been using Panasonic’s HVX200, which I bought the first week it came out and I literally went around the world in eight days with that camera.  I learned it well, editing in the back seat of a road race that went around the world.  That was a great camera for what we did, for the time, but as 4K becomes an inevitability in this line of work, we needed to upgrade.

For us, the idea of shooting 4K in the camera itself was a really big factor in choosing the FS7. In addition, the camera has a higher bitrate and the picture is just beautiful.  It’s definitely a step up, all around. 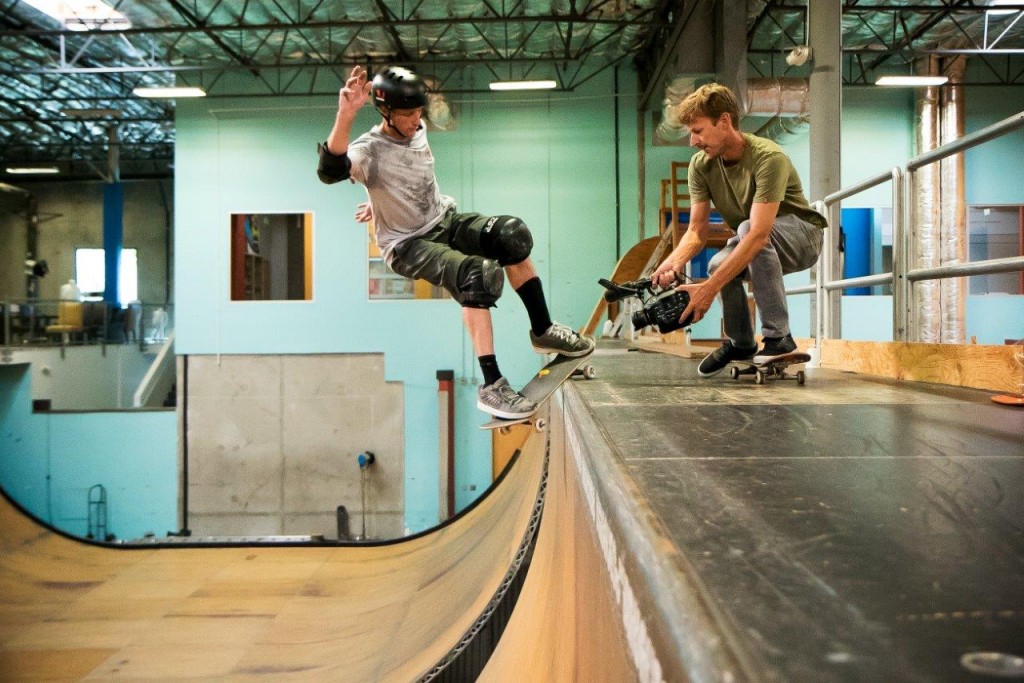 It is great to be able to shoot 4K in-camera, just for the sake of saving time, being able to go back in and crop it, and having an image that is easy to work with and manipulate based on our needs.  That’s another great thing about 4K, not just exporting in 4K and making a 4K file, but saving time when you’re shooting certain things.  Even though we can put out videos in 720p or 1080p, having so many extra pixels is almost like having a second camera.  For example, I was shooting art at a big event for Tony’s foundation and we had a limited time to shoot all of the pieces and do close-ups, so we shot in 4K and got the most out of it – a wide shot and a tight shot all in one.

We also own and currently use Sony’s NEX-FS700 and have for quite some time.  We use it for shooting high speeds, which was the main reason we initially chose that camera, and we still actively use it for that purpose and love it.  Mixing and matching footage from the FS7 and FS700 is really easy and looks seamless, which is another benefit.

In addition, we use Sony’s A7S when we need something small, compact and portable and Sony’s Action Cam for time-lapse videos.  Interestingly, this is another reason we chose to use the FS7 and the other Sony cameras. They all shoot, handle and look really similar, in addition to working really well together. All my Sony cameras, to be honest, excel at shooting in low light, especially with that SLog picture profile.  There is a certain “Sony look” that I like and that I’m used to and with the Slog straight out of a camera it winds up being a look you can create in post.

Another great feature on the FS7 are the neutral density filters that pop-in.  After holding a tight camera like an A7S and thinking, “I’m shooting in low light and there is nothing this camera can’t do,” you realize it would be nice to have some ND filters, and it would be nice to have bigger manual controls that you don’t have to go into menus for.   Big manual controls aren’t something that sounds appealing to a marketing team, but it’s probably one of the most important features when you need it.  When you have to make a change on the fly, the last thing you want to do is go through a bunch of menus.  I know it’s boring, but those types of tactile buttons are so important to me.  Being able to set a menu up for yourself, with the assignable buttons, is a great and thoughtful feature.

We have a ramp in our office that’s 14 feet off the ground and we’ll actually skate on the deck and shoot on the top platform of the ramp, while the skateboarders are doing tricks.  The FS7 is especially great for shooting in this manner and environment.  The camera is a nice, small, contained package and produces a really great image despite the poor standard fluorescent lighting in our office above the ramp.  The skating area, which in addition to being 14 feet tall, is almost 100 feet wide and about 40 feet in length, so it’s a big surface area to cover in a warehouse-like setting and we are able to do it easily with the FS7. 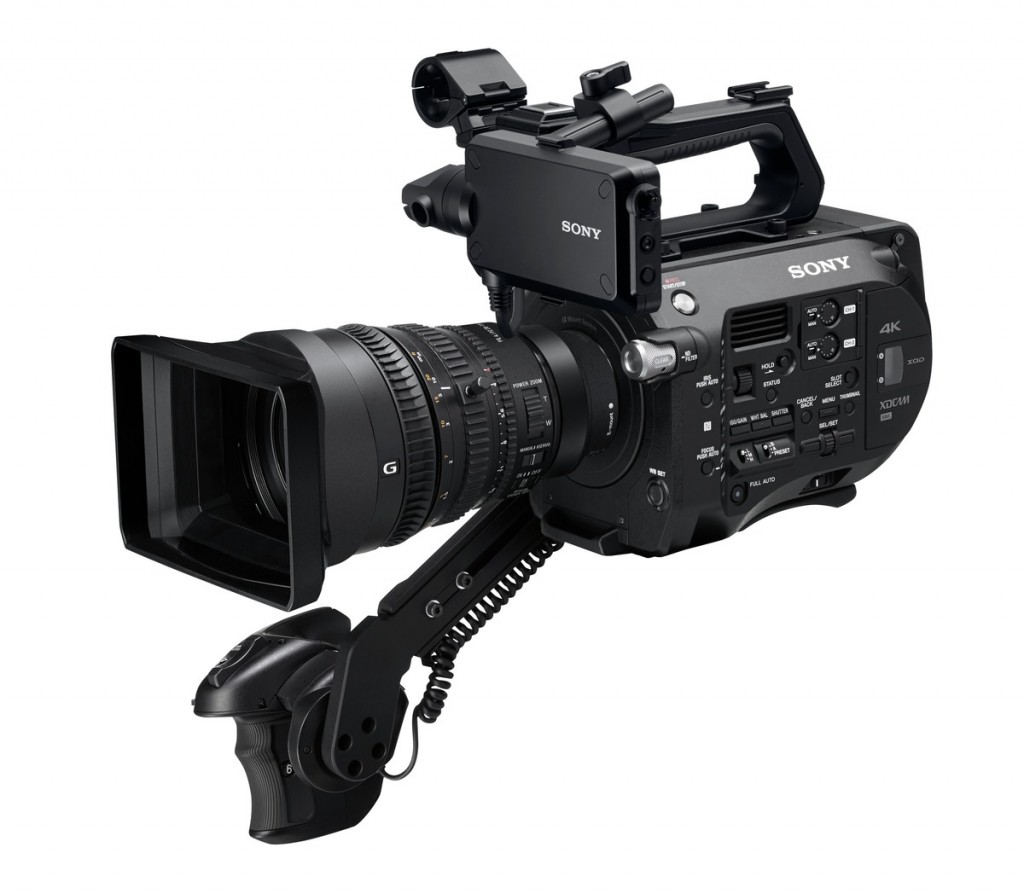 Where a lot of filmers and DPs build out their cameras with long rods and a mattebox and focus pull, we generally keep our cameras really small since we are actually skating while holding the cameras.  We’ve got to keep up with the action, and it’s not something I could get a dolly or a car for.  You’ve just got to be super nimble and the FS7 helps us achieve that.  The idea that we can have a camera with a little handle on top is ideal for us, and it has great ergonomics.  The weight is really centered on the handle itself and when you have a short lens — we are usually shooting with wide angle lenses — it’s just a great package that works for something like that.

The 28-135 mm powered zoom lens that comes with the camera is awesome. I love using it for long lens shots, like when one camera might be on a tripod and one rolling around on a dolly.  It is really ideal for interviewing. I do interviews on that camera for a show that takes place in my office.  For interviews it’s the best lens we have.  It makes my life easier because of the servo zoom and it makes it easy for shooting an hour and a half interview show.  It’s nice to be able to punch in and pull out in a simpler way than just rolling the manual zoom.

Another overlooked and underappreciated feature that I like is the level check on the batteries.  I’m never hooked into the V batteries or wired through AC.  I like to use the small battery because we tend to want a smaller package.  For whatever reason, Sony batteries always seem to be the best of all the brands I’ve ever had.  Having the gauge on there is so simple and wonderful, and Sony does so many things like that.  Whether you are skating or in the field, if you have a battery in the camera and one in your pocket you’re all set.  It’s these small conveniences that are great to me and Sony really excels at that.

In my decades of observing skating, I’ve learned that you can’t just tell someone to do something amazing on a board, on command.  It takes months and months of practice and trial and error.  The same is true with capturing skateboarding.  You can’t necessarily spend time setting up and finding a spot that looks great.  It’s much more organic than a director saying “roll” and then capturing the action.  Everything is on the fly, and for me the spontaneity is what I love about it, and I’ll never tire of it.  While I may not be a skate kid of 14 any longer, I still get that same familiar thrill when I know I’ve shot something amazing, something that may have never been captured on film before. I’ve managed to catch these once in a lifetime moments again and again on Sony camcorders, and I hope to for years to come.