When shoots in the Arctic Circle you learn a thing to two.

It is not often the call to head to the Arctic is dialed. For DP and Lead Producer of Adam Savage’s “Tested,” Joey Fameli picked up the phone which led him down the line to head to the Arctic Circle aboard the Russian Icebreaker Kapitan Khlebnikov. Canadian Astronaut Chris Hadfield and his Generator Arctic team invited the “Tested” team on an 18-day voyage sailing through Greenland and the Canadian High Artic.

Joey and the rest of the “Tested” team used several Blackmagic Micro Cinema Cameras, a Pocket Cinema Camera along with their Sony FS5 on their Arctic Adventure. The trip aboard the Kapitan Khlebnikov and the cold temps made for a challenging shoot. For example, each crew member was limited to 50lbs of luggage. Kind of limits the gear one would take doesn’t it.

“Tested” is Adam Savage, of “Mythbusters” fame, home on the web. With one of the website’s founders, Norman Chan, they bring the strange, unique, and interesting content to their viewers via video, podcasts, and more. “Tested” is geared to STEM (science, technology, engineering, and mathematics) fields. You can check out “Tested” here. 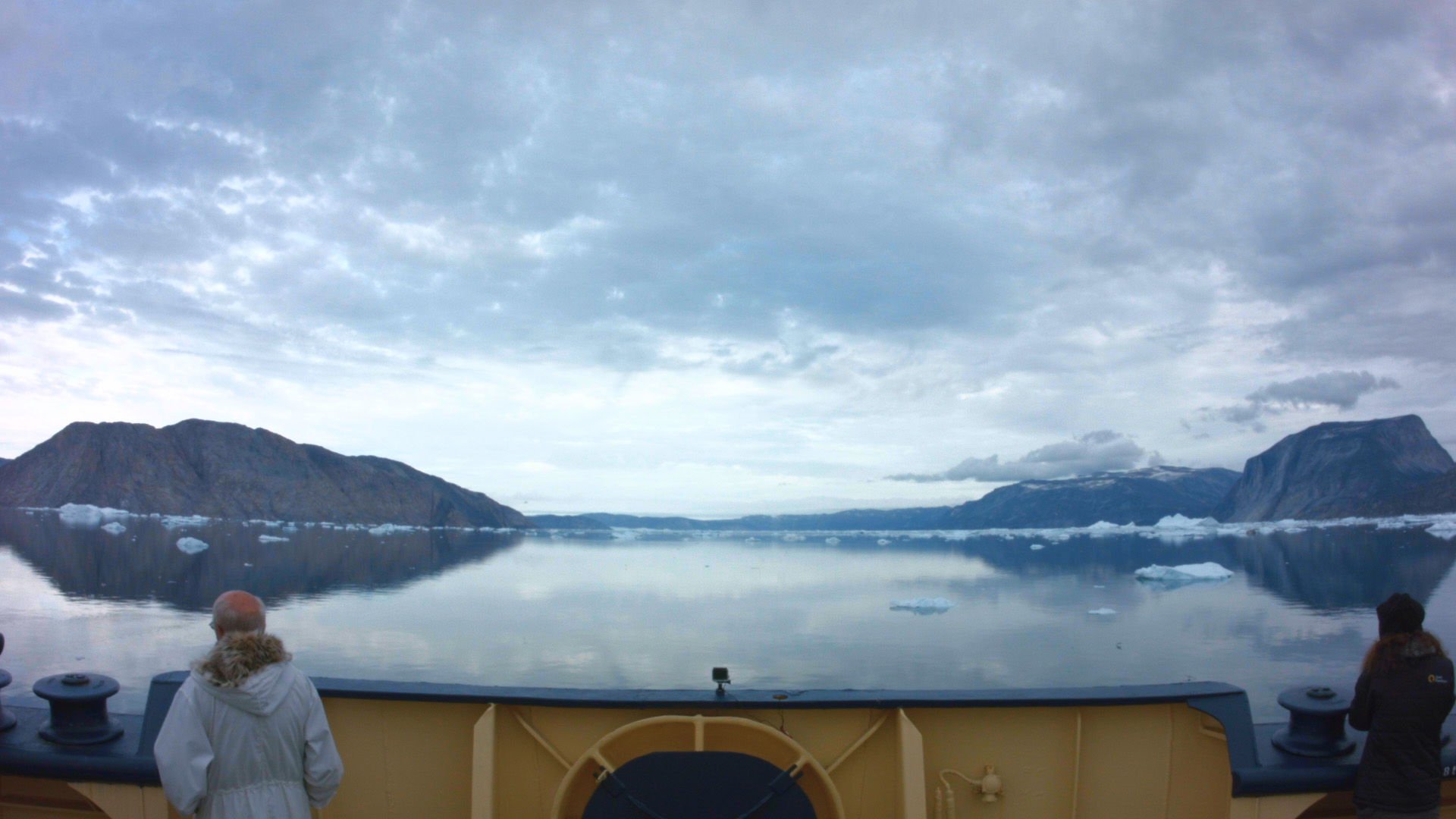 Hallett: You recently just had a shoot in the Arctic

Fameli: Yes, we spent 18 days in the Canadian High Arctic in Greenland with a group of other artists and photographers and video guys. So w took a lot of BlackMagic micro pocket gear along with our gear. We took two Micro Cinema Cameras and then I also took the pocket camera and then we took the main camera, the Sony FS5. This was our second run with the Micro Cinema Cameras so far. We’ve used them on some car shoots up to that point. I brought some clamping gear with me to the Arctic and did some time lapses on the ship and did some quick little shots out on the glaciers as well.

Hallett: How about your prep when you guys knew you were going to do this assignment, what went through your mind when you were thinking about cameras and the weather?

Fameli: It was me and my colleague Norman Chan, he was one of the founders of Tested, we had a weight limit. It was 50 pounds each for the charter flight that took us to Greenland. So we had to select what to bring and we knew we wanted to bring one main camera for our interviews. Then we loaded up the pelican case with heat packs.  All the people we talked to who shot in Alaska and cold places told us to bring something to keep our batteries warm because the cold drains batteries pretty quickly. 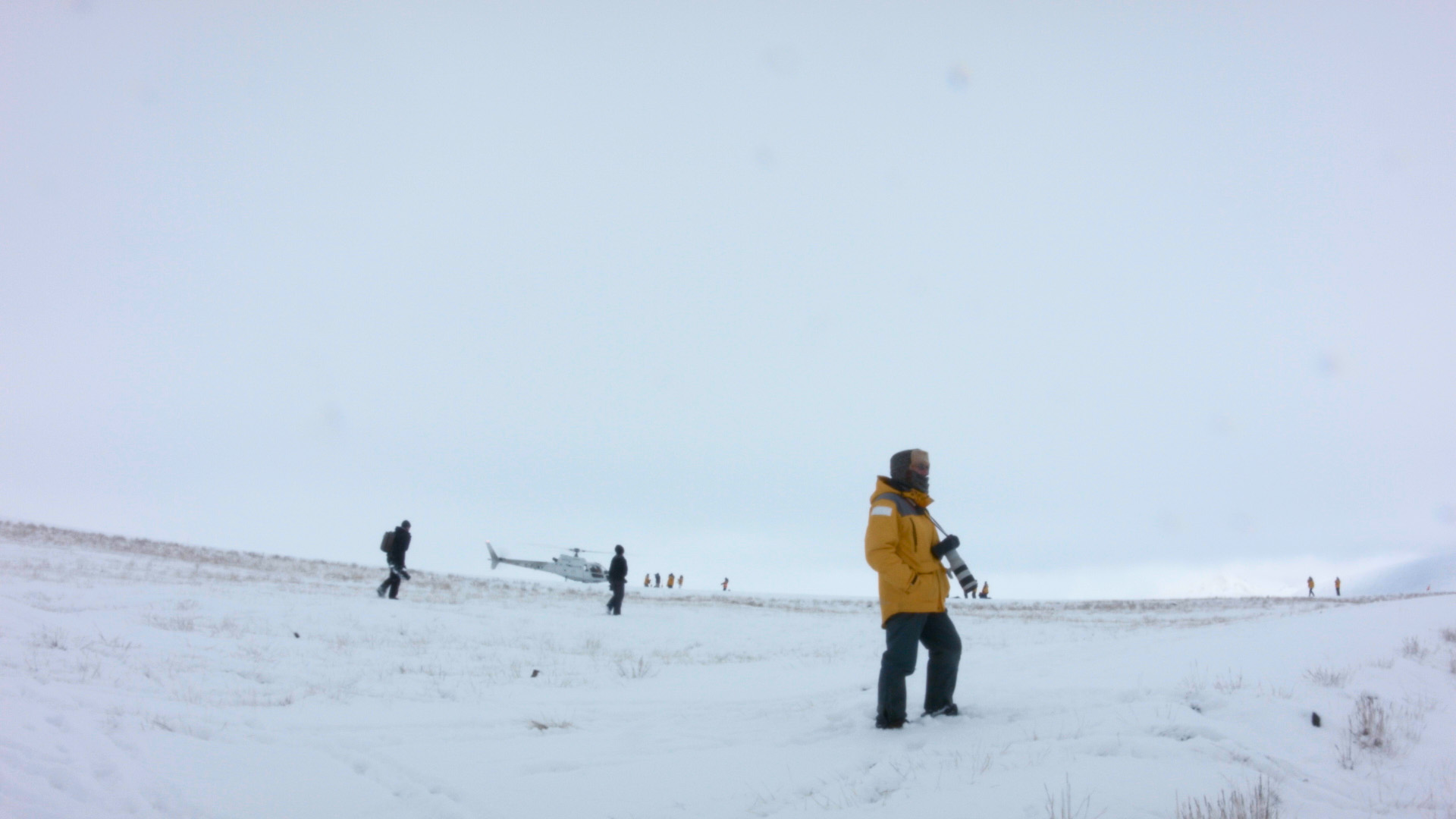 We also brought a drone with us, but that ended up not really working too well there. The drone was our one thing that the cold broke down and it wouldn’t fly.

We were really looking for gear that was portable. We knew we were going to be doing a lot of helicopter rides and a lot of zodiac rides, which are these little boats they use to take us ashore. We needed something we could throw into a small pack and go.  This is where the micros came in.  We knew we could wear a parka with a Micro Cinema Camera in one pocket and a monitor and batteries in the other pocket. We had a SmallHD monitor with an HDMI cable. I’d clamp it to a rail or a pole and then plug in the monitor.

Hallett: Were you shooting RAW, HQ pro res or what?

Fameli: Pro Res 422 HQ. When we went to Budapest I shot a bunch of tests out there at sixty frames a second.

Hallett: How long did the batteries last in the Arctic? 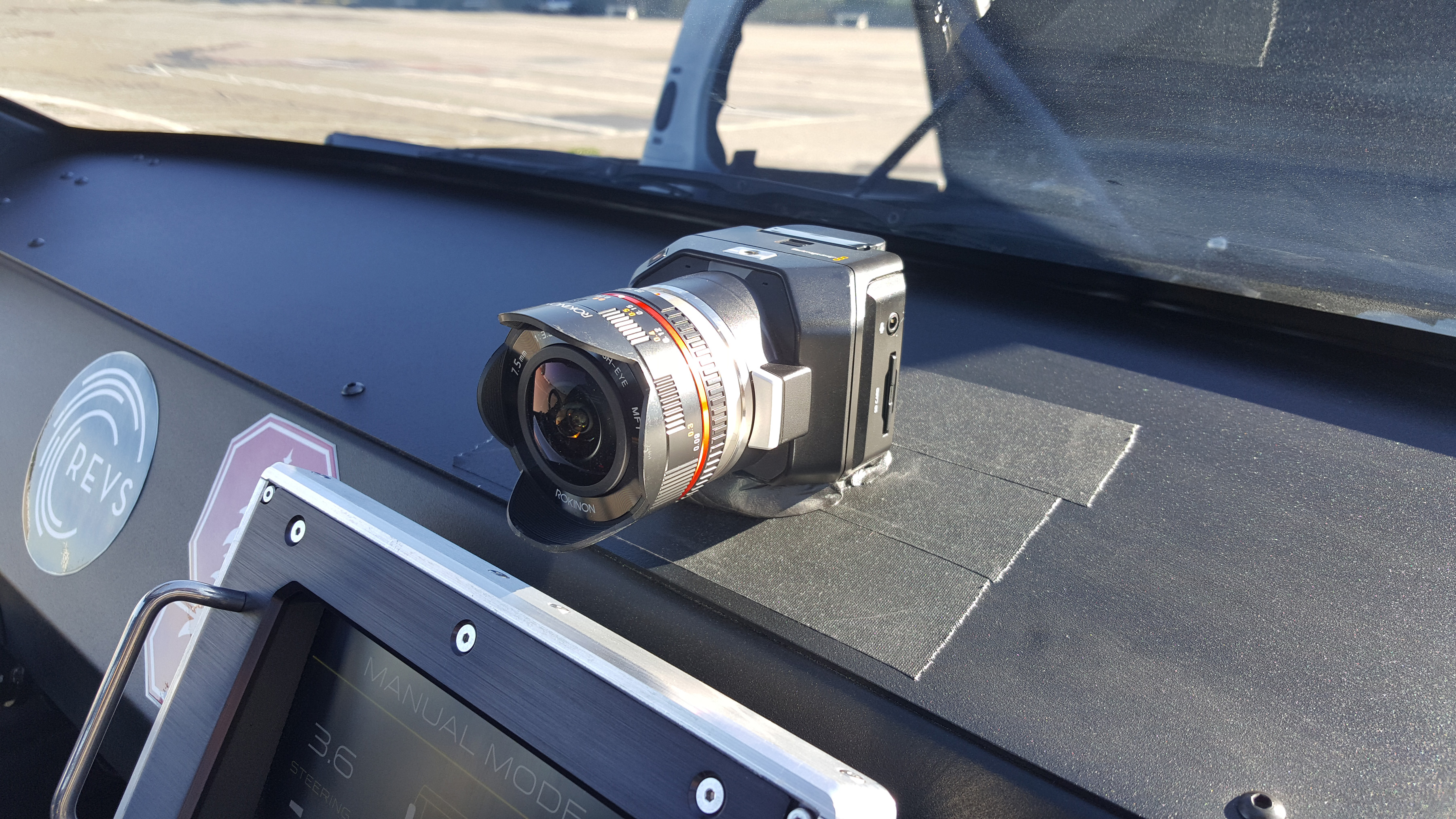 Fameli: On the coldest parts of the ship I taped a hand warmer to the back of the camera. In those situations, I think the battery lasted about forty minutes.

Considering his experience with the Blackmagic Micro Cinema Cameras and Pocket Cinema Cameras it was no surprise Fameli turned to Blackmagic’s Studio Cameras when it was time to upgrade “Tested’s” studio.

Fameli: We needed something that was dedicated just to our studio. We didn’t have a huge budget and we wanted something high quality and looked uniform. In the past, we have used a handful of different cameras and the color profiles never quite matched up. We knew we wanted the same camera and the same look.

Fameli: In the studio one we have a couple Panasonic micro four thirds 14-140s for some real tight shots and then we have some adapters where we are using our Rokinon Canon EF cinema lenses: 24, a 35 and a 50.

Hallett: If you could give any tips to cameraman or woman who will be traveling what would it be?

Fameli: Pack comfortable and pretty tightly. I found I like to shoot the reality of places. The real life scenarios and people out there who are not playing it up for the camera. I’ve found my camera rig has gotten smaller because I’ve realized how my presence around people in different parts of the world informs them how to act. If I come up to them with a big camera, a light, and a microphone and I got a very different performance than if I approached them with something smaller.  The Pocket is the perfect example of why I travel with a smaller rig. People act in a different way when there’s a tiny camera as opposed to a big camera that is up in their face.  You get much more of a real raw encounter with people and getting those real moments on camera is what I’m looking for when I go out.

Hallett: Did you have any moments like these when you were in the Arctic?

Fameli: I knew that we were going to be there for 18 days. I tried to wrap my mind around how I was going to shoot everything, and how the experience would affect me. I wanted to be vulnerable to the insane experience that I’ve been given. I got much more control than how I was shooting out there, you know, I go to these new places and let the experience move me, if that makes sense, and then I was shooting a lot of slow-motion with one of our cameras and that camera needed to process each slow motion shot which forced me to wait which allowed me to enjoy the place more. 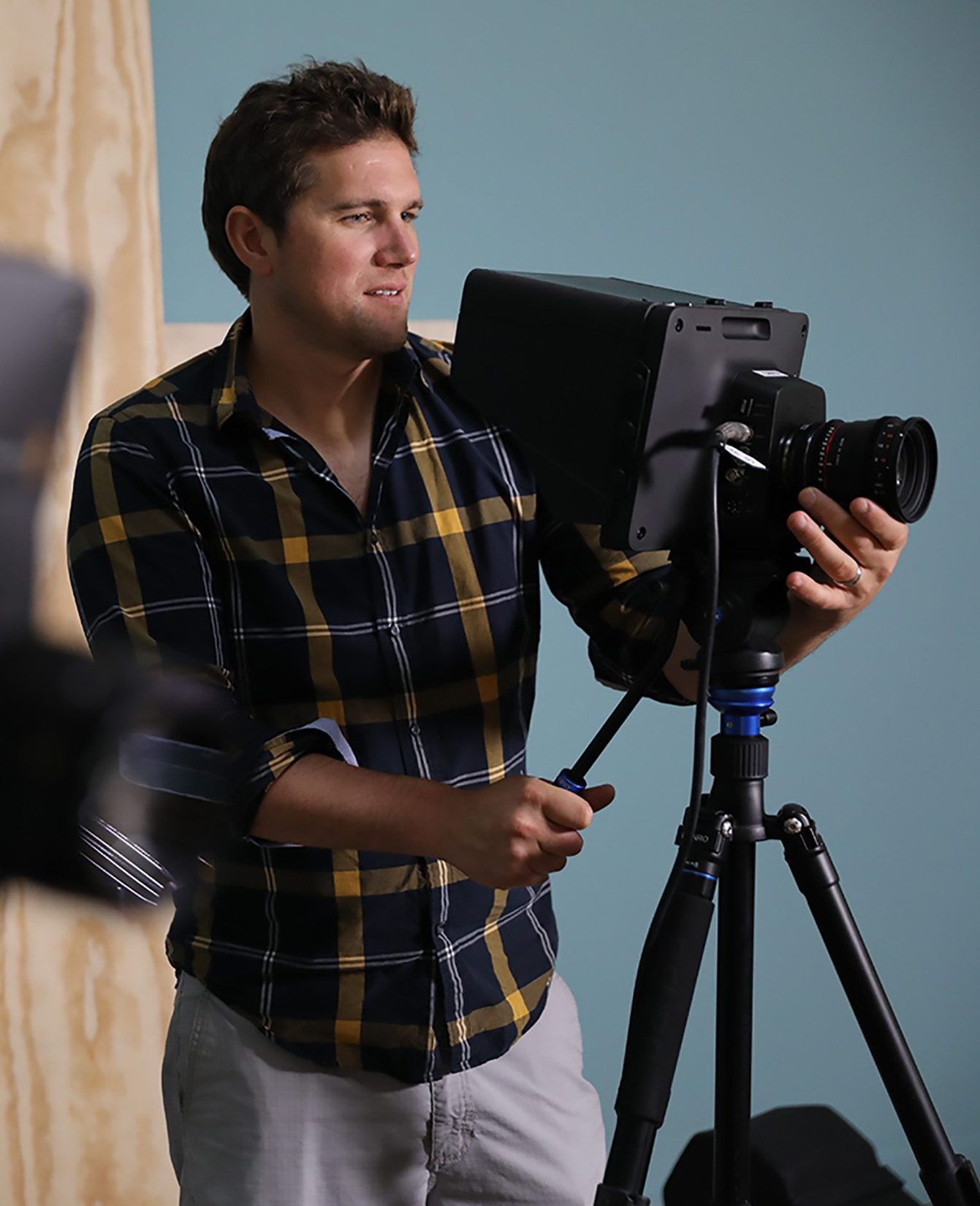