Andrew Kramer has been the most enthusiastic provider of footage and tutorials on creating shockwave effects in After Effects, and recently Daniel Brodesky created something similar, using Trapcode Particular instead of Fractal Noise for the base of the effect. There are a few other resources too, but much of what's been published is outdated or no longer available. 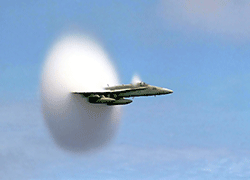 Shockwaves are high energy waves most often seen in explosion. But they also occur when Paul Atreides speaks (with or without a Weirding Module), or when a ship breaks the sound barrier, as seen left (no known simulations of that in AE).

In After Effects, "shockwave" sometimes refers to those circular rings seen in space opera explosions (aka the praxis effect), but more often people are referring to stylized versions with some dimension that you might imagine in a plasma chamber. Oddly, few seem interested in replicating shockwaves of star system destruction in classic sci-fi movies, or even the blast effects seen in Tim Burton's 2001 movie, Planet of the Apes.

Here's a volvanic blast and video of the physics of a blast wave; an article titled The Anatomy of an Explosion adds some comments. For additional resources on explosions, see BANG! The Anatomy of Explosions at AE Portal archive.

Examples of tutorials for this sort of shockwave include Blast Wave by Andrew Kramer, Great Looking Explosions In Adobe After Effects from Surfaced Studio (using the Bulge plug-in), and Red Giant TV Episode 63: Plot Device – Thunderdome, which takes you through the process of creating an explosion and shockwave effect.  Here's Surfaced Studio and Seth Worley for Red Giant software:

Besides Blast Wave, Andrew Kramer also produced Planet Explosion (AE Help said that you can animate the Radius property of the  Shatter effect). Moving into the plasma shockwave look, Video Copilot has an example of a shockwave used as a muzzle flash on an "energy weapon."

To speed integration, Video Copilot also sells Shockwave FX, a digital stock footage collection of 50 advanced particle animations, simulated with real world physics. You can get it in a bundle deal with two thousand sound effects in Motion Pulse. In addition, Andrew shows you how to create similar shockwaves inside After Effects with only native tools: see this essential stuff in Shockwave Tutorial 100% in After Effects!

Inspired by Andrew Kramer, in Creating a Shockwave Effect With Trapcode Particular in After Effects Daniel Brodesky showed how you can use Trapcode Particular to create the start of a shockwave effect in After Effects. Brodesky explored what might be achieved if you used a custom sprite for the particle shape, as well as other particle types, and controls for properties like particle life and direction.

Other tutorials also combine techniques from Andrew Kramer and elsewhere, as in the case of a those using Trapcode Form, which includes Shockwave Intro Tutorial – Energy Burst [Advanced] by Graphics Mastery, two in German by MaxGFX and by WieselGFX, and EPIC Trapcode Form Shockwaves (+Free Pre-Rendered VFX Pack) | After Effects CC Tutorial by Ch-Ch-Check It. The latter included various downloads, including some pre-renders of his shockwaves for those without Trapcode Form. 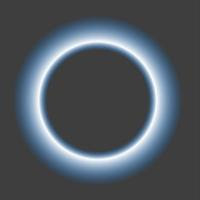 There are other resources, though they seem for the most part much the same. Many of the older resources are no longer available or have broken links to presets and project files. Only loosely-related, but fun, is Maltaannon's video tutorial on the Circle effect. And of course there's Radio Waves, though all familiar thoughts seldom pan out.
Several years ago, Andrew Yang posted a new Pixel Bender filter at AE Scripts, YY_ShockRing. It's a 2D ring generator, not so different from the Circle effect built into After Effects. ShockRing was intended to create a "texture for shockwaves, etc for visual effects. It has enough options to be fairly flexible, but not so much as to be overbearing." Pixel Bender plug-ins work in AE versions through CS6 and Photoshop CS4 and CS5. You might revive ShockRing with Pixel Bender Accelerator, a native After Effects plug-in that runs Pixel Bender filters using the GPU of your video card in CS6 and above. It might be better to focus on Andrew Kramer's native tools-only tutorial rather than working through that from scratch.
Energy Blast Effect – After Effects Tutorial by Motionsquared is from 2012, so the thinking is not directy linked to Video Copilot.

Shockwave – Adobe After Effects Tutorial by Georgiiou is a little different than most other recent tutorials, though it's more similar to those than the more complex sci-fi shockwaves. It's extemely long, and maybe could benefit from a trailer or executive summary, at least for those of us suspectible to the siren song of Internet tangents.