The easiest way to simulate shattered or broken glass in After Effects is with Shatter, an older 8-bit per channel plug-in that ships with After Effects. Originally developed by Brian Maffitt under the Atomic Power banner, Shatter is mostly used for shattering glass, brick walls, puzzles, and so forth, but also used to generate 3D text or shape blocks. But there are other options available if Shatter doesn't work for your needs. 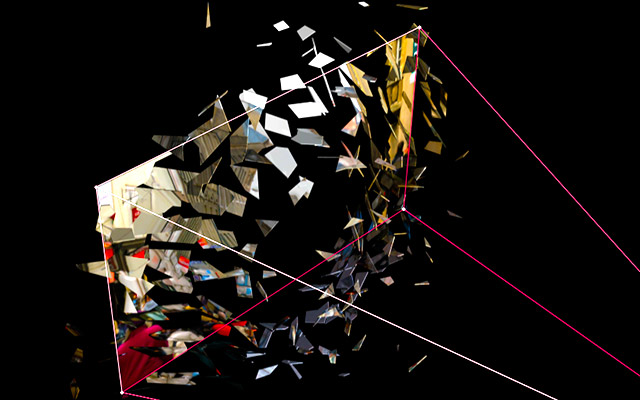 AE Help has details and tips on using Shatter, but the mother lode was posted in 2011 when Total Training opened the vault to free a comprehensive tour of the Shatter plug-in by Brian Maffitt. Although Shatter has been updated to use Comp Cameras, the interface of the plug-in is essentially the same.

The belly of the beast is custom Shatter Maps that allow user-defined fragments or particles — but there's a preset for glass, so it's very easy to start refining your final look. Here's Brian with a 45-minute intro; you can catch the other 5 parts in Favorite videos on the Total Training YouTube Channel:

Awhile back, J. Schuh posted Shattering Glass with Adobe After Effects at Layers magazine. He got decent results by using a shattered glass texture from a side angle, without using a custom Shatter map. Here's what you might expect using the default look, After Effects Shatter Glass Tutorial:

There are other options available if Shatter doesn't work for your needs.

You can get glassy looks with the Ray-traced 3D renderer in AE, but there seems to be no attempts to render shattered shards using it. Create Broken Glass in AE by Mikey Borup creates glass shards with shape layers with refraction from displacement.

Another method is using the Scatter and Displace properties in Video Copilot Element 3D to create animate 3D fractured objects; see Andrew Kramer demo this feature in 128. Element Animation Engine. There's a free preset for glass shatters and more available from VFXer.com in How To Shatter Or Fracture 3D Models For Use In Element 3D. See also, Aharon Rabinowitz in Free Shatter Object Presets for Element 3D, though it has no glass pane. Here's Andrew on the animation engine of Element 3D (skip to 20:50 for glass):

BakersTuts posted Icy Shattered Glass with Element3D, which uses one of 10 broken glass models from the Motion Pack. It seems the only model close in the default E3D install is a chunky floor fracture preset.

Examples from the many resources in the 3D world include Shattering Glass (in 3 parts) from Motionworks, Reflective and Refractive Glass Block Tutorial Part 2 – After Effects from Greyscale Gorilla, and Create a Shattering Glass Animation in Cinema 4D & AE in 4 parts by Cyril Kotecky.

Given the difficulty of creating realistic simulations in After Effects, stock footage might be a good option. Many of the choices are expensive though there are a few free and temporarily free resources, like Free Slow Motion Footage: Slingshot Broken Glass from Epic Slow Mo.