Secondary action is ancillary to the primary action of an animation. Secondary actions help to create the illusion of life, heightening interest and adding some realism – whether in character animation, visual effects, or motion graphics. Tutorials that deal with this basic idea explicitly in After Effects are rare.

Several months (and Tweets) ago, Joey Korenman of the School of Motion posted Intro to Secondary Animation in After Effects.  It should inspire others to spice up simple animations, though some may want to check out his earlier lesson, Intro to Curves in After Effects, as well as time offet methods and a time offset expression script from Creative Congo. 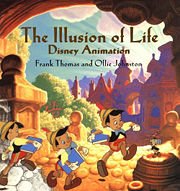 Not to be confused with follow-through & overlapping action and exaggeration, secondary action is one of the 12 principles of animation of physical animation as described in The Illusion of Life: Disney Animation:

“Often, the one idea being put over in a scene can be fortified by subsidiary actions within the body. A sad figure wipes a tear as he turns away. Someone stunned shakes his head as he gets to his feet. A flustered person puts on his glasses as he regains his composure. When this extra business supports the main action, it is called a Secondary Action and is always kept subordinate to the primary action.”

Lester Banks noted that the long-awaited Duik 14 for After Effects “comes with a new spring modifier as well as a wiggle tool. Both of these will allow you to create easy secondary motion with effect panel controls at the click of a button. These two tools can not only be used for secondary on characters, but also a quick way to create secondary on any animation in After Effects.”


The 12 principles of animation are broadly applicable in character animation, visual effects (see Scott Squires and Mark Christiansen), and motion graphics. There have been a few tutorials that looked at these principles in general; see especially Vincenzo Lodigiani at the bottom of this page. Here's the preview of an After Effects tutorial series by Bryan Clark, 12 Basic Principles of Animation.

Wikipedia has a decent article on the 12 basic principles of animation, “a set of principles of animation introduced by the Disney animators Ollie Johnston and Frank Thomas in their 1981 book The Illusion of Life: Disney Animation.” Most will already know, but it's one of the foundational texts in animation, and famously summarized by John Lasseter of Pixar.

If you don't have Lasseter's seminal 1987 SIGGRAPH paper based on The Illusion of Life, there's a decent scanned copy available: Principles of Traditional Animation Applied to 3D Computer Animation.

Fuel Your Motionography [RIP] posted a 3-part series of articles a few years ago, with examples from recent works; see Principles of Animation for Motionographers – Part 3 of 3 via The Wayback Machine. And in the Lynda.com training series After Effects CS4 Beyond the Basics, Chad Perkins explored techniques for animation according to several of these principles.

Also, check out Alexander Williams' 2-part explanation on YouTube, sampled below from The 12 Principles of Animation – Part2.

Last but not least, Vincenzo Lodigiani has a nice animated demonstration of the 12 principles at Vimeo and in a pleasing Tumblr gallery. He says: “It's all AE. Some parts are cell animated but not in Photoshop.”
Support ProVideo Coalition
Shop with