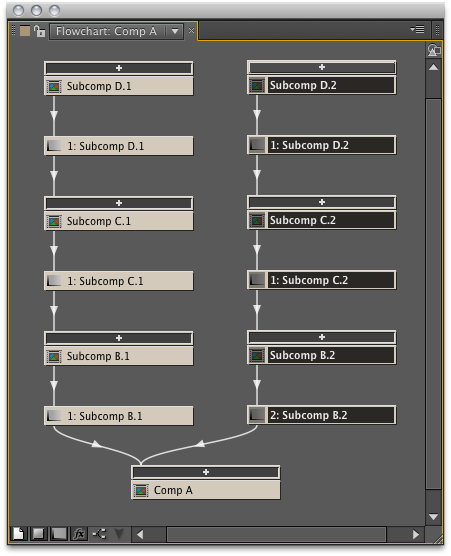 Note: this is the fourth in a series featuring one After Effects script a week, now appearing at the beginning of each week. For an overview on scripts, check out the debut post.

An astonishing amount of the work that gets done in After Effects is theme and repetition work. You create something, and then there is the need to create 1, 2, 10 or 147 more of them, and for each to be similar yet unique. This generalization clearly applies to motion graphics work, in which pattern forms are part of the deal, but it applies equally well to a visual effects scene with, say, a crowd or a bunch of green screens taken with the same setup.

You can duplicate a comp and re-use it, no problem. But if you’re doing your job correctly in After Effects, that one comp may very well not contain all of your work, but is likely to contain sub-comps that contain all of the detail you’ve put into individual elements. These sub-comps often go three or four layers deep, but when you duplicate the master comp, only that one is duplicated; if you also want the sub-comps to be unique – which, more often than not, you do – you need to do that by hand.

And any time you think that thought when working in After Effects, “I guess I need to do this by hand,” try training yourself to think “I must find a script that does this,” and thank me later. Here is a classic example of a workflow problem, plain and simple, that because of how it is implemented in After Effects, can lead not only to painstaking effort but also careless errors (particularly if you loathe repetitive tasks as much as I do, in which case careless errors are a particular Achilles heel).

In Nuke, when you select a set of connected nodes and copy/paste them, all of the components in the new branch are unique (although the file path to any source footage is also copied over, which is easily repleaced). True Comp Duplicator recreates this behavior in After Effects, treating the elements of a comp like the nodes on that Nuke tree, and does it one better by allowing you to choose how the new names are formed.

Sounds trivial, right? Indispensible is more like it. And if you are clever about naming your files, the result can even automatically increment the duplicates in a way that makes logical sense. The UI for this script (when installed into the ScriptUI Panels subfolder, see the first post in this series for details) lets you specify where in the name to increment and even allows you to replace one text string from the source comp with another, which is as good as a custom script for any nodal compositing app.

This is the first script featured in this series that uses the “Name Your Own Price” scheme on aescripts.com; it is shareware, as are the majority of After Effects scripts, despite the recent trends to serialize the most valuable among them. This means you’re not prevented from grabbing it if you’re in a facility where a purchase order would be required to actually buy it on a deadline, and you’re free to kick a few bucks to the developer at any time to encourage more of these great workflow enhancements to be devised and shared.