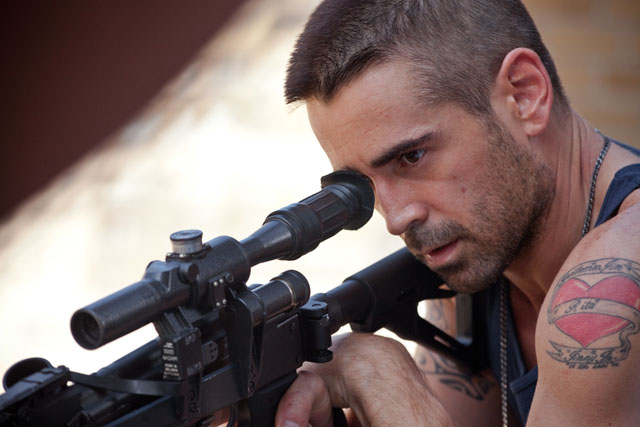 “SCRATCH or SCRATCH Lab on-set can give cinematographers the ability to craft their images quickly and bottle the color at source – so that what they shoot and approve on-set will be there when it goes to DI colour correction.”

Color, and the final look of a feature or TV commercial, are close to every cinematographer’s heart. Harnessing the power of SCRATCH Lab and the skills of DI-grading/DIT company Pretty Moving Pictures, guaranteed that the carefully-crafted lighting Paul Cameron ASC created on Dead Man Down, and the subsequent graded dailies, ended-up exactly they way he wanted them in the final Digital Intermediate (DI) grading session.

Pretty Moving Pictures is a file-based editorial and DI grading boutique located in Sacramento, CA. It was established in 2011 by colorists Mike Burton and Erik Espera, and DIT/on-set grading specialist Dane Brehm. The company provides filmmakers with the technology solutions and talent for finishing features, commercials, television and corporate productions in its editorial and DI theatre, with Lenovo, McDonalds, Intel and Apple already among its credits.

With the accent on maintaining the integrity of the moving image from start to finish on a production, the company also provides DigiLab Mobile cart systems, featuring SCRATCH Lab, delivering the power and flexibility to handle SD, HD, 2K, 4K and S3D file management, data back-up, dailies, and archive capabilities all in one mobile unit. These carts can ingest all the formats from an array of popular cameras including ARRI, RED, Phantom, Sony, Panasonic, Canon and GoPro, and are customized and scalable to suit the job in hand.

“We treat each project individually and customize workflows on-set and in post-production that allow for a seamless finish,” says Pretty Moving Pictures colorist Mike Burton. “Along with saving our clients time and money, it also does away with any uncertainty – what they shoot and review on-set will end up on the DI screen.”

However, it’s the company’s work on Dead Man Down (2013) lensed by Paul Cameron ASC, that proved a landmark in creating end-to-end color consistent pipeline.

“Thanks to SCRATCH Lab, for the first time in digital capture Paul felt what he had shot on-set exactly matched what he saw in the projected dailies and final DI,” says Brehm. “Harnessing the power of grading on-set, Paul could see his dailies come to life quickly, and this in-turn laid solid foundations for taking the looks faithfully through the rest of the process.” 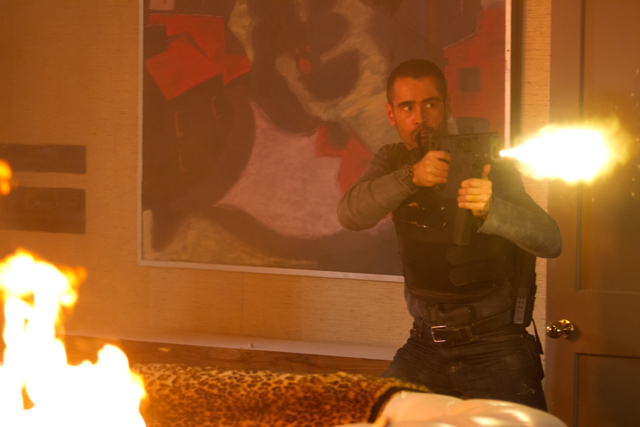 Dead Man Down is the $30m American neo-noir thriller crime film written by J.H. Wyman and directed by Danish director Niels Arden Oplev. Set in New York City, the story follows a crime lord's right-hand man who is seduced by one of his boss's victims, a woman seeking retribution. The movie stars Colin Farrell, Noomi Rapace, Dominic Cooper and Terrence Howard. It is Oplev's first film since The Girl With The Dragon Tattoo, also starring Rapace, and was released in March 2013.

Dead Man Down was shot on locations in Philadelphia, doubling for New York City, as well as some locations New York, from April to June 2012. Cameron selected ARRI Alexa, shooting ARRIRAW, for the majority of production, with additional VFX greenscreen plates also captured on RED EPIC.

The challenge: To provide a leading ASC cinematographer with a consistent color pipeline from set-to-post

“Unlike many studio pictures, where the on-set and post-production workflows are pre-ordained and determined by the post facility, often before the cinematographer is hired, the workflow for Dead Man Down was a blank canvas,” says Burton. “We did not have a post house on the project during production, and the workflow was driven by what Paul wanted – across-the-board consistency.

“Our specific challenge was to make sure that the images Paul created on-set coordinated with editorial and post, and that they looked the same on-set, in projection at the end of the week and in the DI later down the line – with no surprises. So we created a workflow and color pipeline, with the leadership coming from the production end, and SCRATCH Lab played a big role in that.”

Cameron was already familiar with SCRATCH, having used it on-set for a number of commercials prior to shooting Dead Man Down, and insisted on using SCRATCH Lab for the production. Working closely with Cameron in pre-production, Pretty Moving Pictures, designed a workflow utilizing SCRATCH Lab to apply primary grades to selected stills and takes and to apply offset LUTs, developed with Cameron, that converted the images from Rec709 to DCIP3 color space for projected dailies and the DI. SCRATCH Lab was also used to create the CDL LUTs and watermarked H.264 dailies for review on iPads by the production team.

Dailies were projected through post-facility Dive in Philadelphia, using a CDL from SCRATCH Lab to deliver color consistency. Pretty Moving Pictures’s OLED on-set monitor was carefully calibrated with the projector at Dive in advance to ensure consistency. Due to volume of material being shot, Sixteen19 was enlisted by the production to transcode the dailies for Avid Rec709 deliveries. Technicolor LA provided the final DI in P3.

Pretty Moving Pictures tailors its DigiLab Mobile cart systems to the needs of each different production and respective cinematographer. For Dead Man Down it configured SCRATCH Lab running on a 12-core MacPro, with a 48TB SAS RAID system for storage, and Tangent Wave control surface for grading on a Sony OLED monitor. Working in combination with Codex Download Transfer System, to download and program the ARRIRAW files directly to the RAID, images were then imported into SCRATCH Lab and Brehm began coloring from there.

“One of the big advantages of SCRATCH Lab is that it has a powerful toolset for handling multiple camera formats. It’s a great equaliser.” says Brehm. “Most shows don’t rely on just one camera system any longer, and sometimes we’ve had to deal with footage in as many as 12 different formats. What makes SCRATCH Lab so powerful for the DIT/dailies colorist is be able to sit with DP, as was the case on Dead Man Down, and begin coloring and match all of the different cameras formats, and so editorial has matched looks.”

Discussing the daily routine on Dead Man Down, Brehm explains further, “On any given day, we’d ingest the first set-up into SCRATCH Lab, normally a test, and tweak the look – harden the contrast, make the shadows cooler by adding a little blue, warm highlights and adjust and balance the skintones – and this would be the look for that scene. I then ingested shots and started coloring scenes to this specification as Paul shot them for real. He would come over between set-ups and continue to craft the look for a few minutes. At end of day he’d spend 30 minutes finishing-up what we shot that day. This was particularly useful if we’d been shooting multiple set-ups at different locations.”

At end of each shooting week, Cameron, Brehm, the director and producers, all assembled at Dive, to review projected selected dailies of the ARRIRAW footage transcoded to 2K ProRes with the color decision baked in. “This meant that the look we had established on-set travelled with the material to provide complete consistency – there were no shocks and surprises when we saw the material again.”

“With the Trays you can simply copy and paste the grading information from a shot in the Tray onto a new shot,” says Brehm. “So we’d start with the establishing shot and then work on the tighter shots as Paul progressed through a scene. The Version tool lets you stack as many versions as you like and then quickly review and compare them whenever you want. No other system does this as well as SCRATCH or SCRATCH Lab.”

Obviously, Dead Man Down was shot in 2012 and technology and trends are moving fast. In 2013, Burton says Pretty Moving Pictures is moving towards having full SCRATCH licenses on-set, operated by a dedicated colorist, rather than a DIT.

“With SCRATCH on-set, we can just do more – like selective color grading, adding grain, and greenscreen pulls – and do it really fast. The DIT only has so much time on-set, in addition to the cameras and monitors, so this calls for a dedicated colorist to take on that role.”

Burton concluded: “Ultimately, SCRATCH or SCRATCH Lab on-set can give cinematographers the ability to craft their images quickly and bottle the color at source – so that what they shoot and approve on-set will be there when it goes to DI colour correction.”