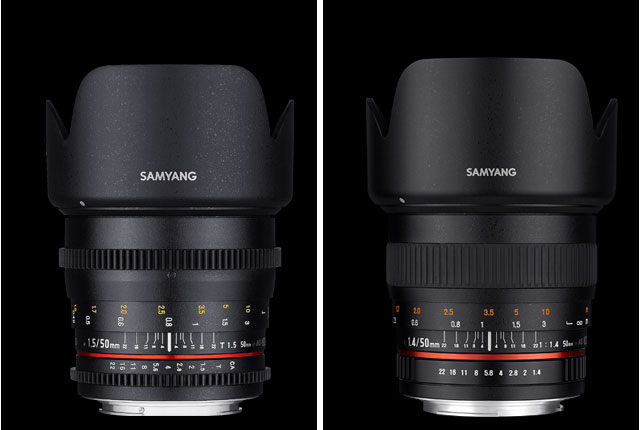 Samyang continues to grow their line of lenses for professional film and video with the new addition, a standard manual focus lens designed for full frame image sensors, the V-DSLR 50mm T1.5 AS UMC. They also presented a normal 50mm lens with similar characterístics, the 50mm F1.4 AS UMC.

The depth of field/distance scale present on the barrel of this new lens is a – good – sign of the old days manual lenses, while the focus ring is designed and placed for easier use of follow focus systems, something that video professionals will adopt. The aperture ring is close to the bayonet and the lens barrel also shows T numbers.

The Samyang VDSLR versions are rated in T-Stops rather than F-stops which is usual for movie camera lenses. F-stop number expresses the speed of the lens on the assumption that lens transmits 100% of the incident light. The T-number expresses the actual light transmission, which is more accurate, and is the standard in professional cine lenses. 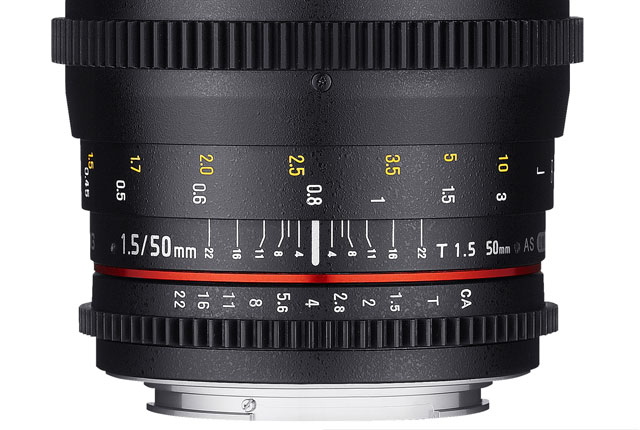 Samyang V-DSLR 50mm T1.5 AS UMC features 9 lenses in 6 groups including 1 glass aspherical lens (ASP), and 1 hybrid aspherical lens (H-ASP) to offer high resolution. According to Samyang, the H-ASP minimizes color aberration to realize exceptional image quality and high contrast for center and corner of image even when aperture is fully opened. Ultra Multi Coating (UMC) technology of Samyang Optics optimizes the light penetration and minimizes flare and ghost. With such optical construction, it has 0.45m of minimum focal length to take photos of subjects in near distance.

The lens frame is compact and solid, built in high-strength aluminum alloy, and the lens has 8 aperture blades designed to be almost as a full circle when aperture is closed, to create a starlike ray clearly and beautifully. The detachable petal-shaped lens hood minimizes flare and ghost by sheltering lens from unnecessary lights. The Samyang V-DSLR 50mm T1.5 AS UMC is available for 10 camera mounts: Canon, Canon M, Nikon, Pentax, Sony ∝, Sony E, Fujifilm X, Samsung NX, Four-Thirds, MFT. 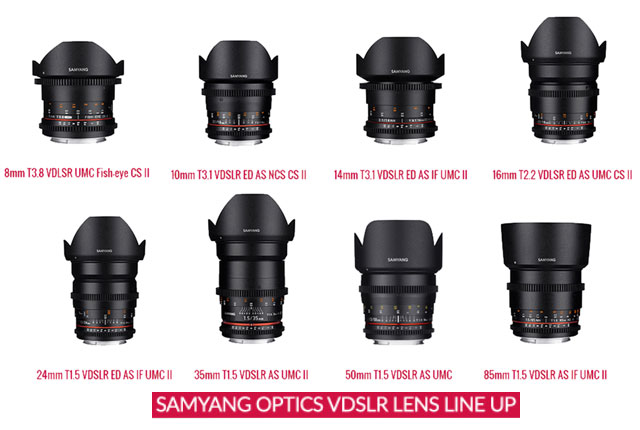 This lens is one of 8 VDSLR lenses that form the Samyang VDSLR Lens Kit. The lenses produce the same image color and have a common placement of aperture and focus gear ring, to maximize the convenience when filming. The lens cost $549 and will be available from September on.

Along with the new cine lens Samyang presents the new 50mm F1.4 AS UMC, which shares much of the same basic characteristics. 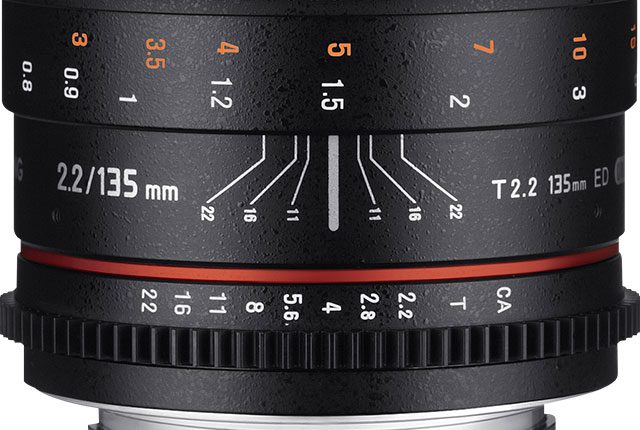 The new Samyang 135mm T2.2 ED UMC VDSLR Cine Lens (also known in some markets as Rokinon) may not...