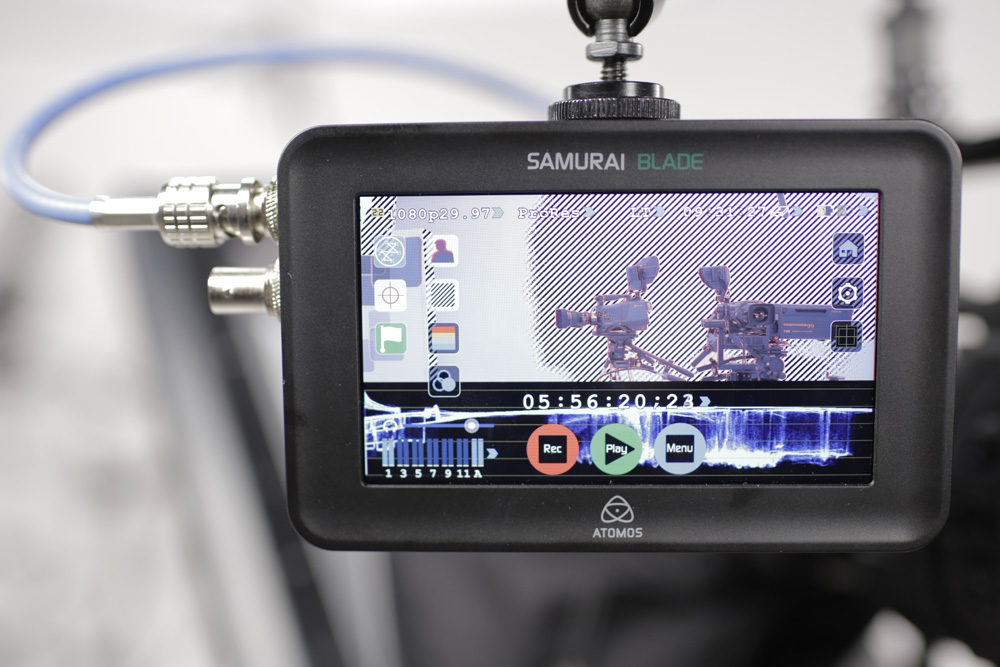 I’ve been using Atomos recorders on various jobs over the last 2 years on about 15 productions but a recent corporate video project was the first time I’d worked with the Samurai Blade. I have been following the screen technology market closely and was extremely excited when I read the new specifications for the Blade. When I actually got my hands on a unit my DP and other camera operators were instantly blown away at the quality and clarity of the new IPS screen.

For the corporate video project we worked on, our production kit consisted of Canon 5D Mk IIIs, Sony FS700s, Sony FS 100s, Zeiss compact prime and Canon L glass, as well as all the lighting and grip equipment needed for most small productions. We have editors that work on several platforms including Final Cut, Adobe Premier and Grass Valley Edius, all with Davinci Resolve color correction. 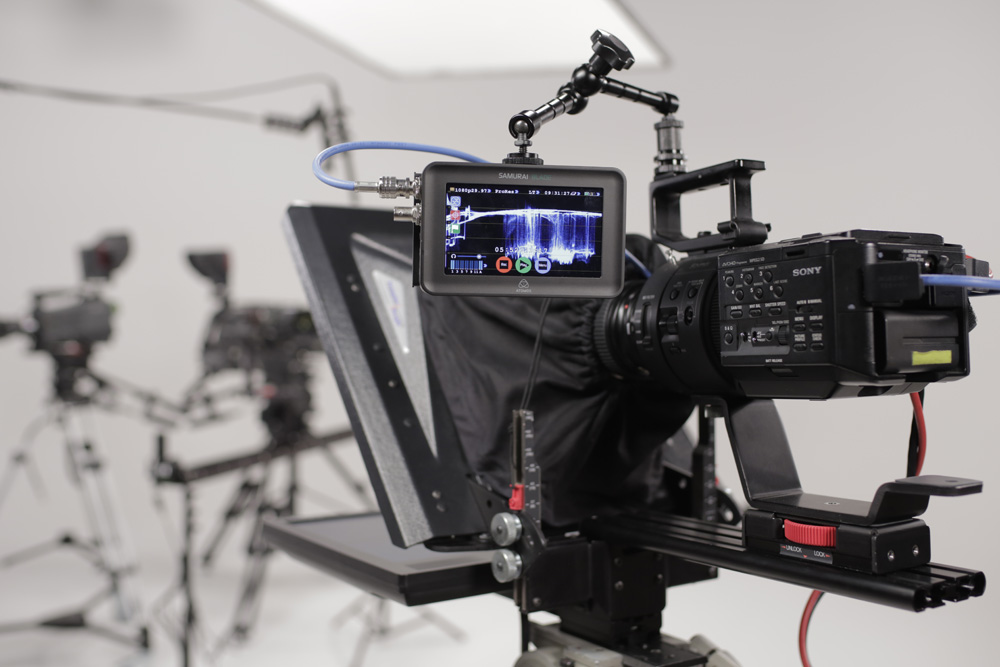 After getting the Blade hooked up to our first camera (the Sony FS700), my DP immediately began playing around with the new menus and spent a great deal of time adjusting his camera color profile by using the built in vectorscope and waveform. He found it so easy to setup that he moved on to the other 3 cameras we were using and got all the cameras color profiles matched while the rest of the crew was still setting up other equipment. This was a huge time savings for post-production as it meant our colorist no longer needed to spend extra time matching cameras after the fact.

The Blade is something I can easily use in a studio environment when I have a multitude of hot lights running as well as outdoors when I have to deal with sunlight washing out the picture. For this project, we had plenty of those hot lights going in the studio, so it was really important to make sure we were getting what we needed from the shoot.

As an independent production manager, the types of productions that I focus on are corporate testimonial and product highlight videos like our work with Grass Valley for their new LDX camera series. They can range from on-site customer interviews to studio based production with up to 4 cameras recording a product demo. Recently, I worked with Portland based Droptree Productions and used the Atomos gear for commercial use to ensure that we were able to capture directly to ProRes 422 to not only preserve the exceptional 10-bit quality but to instantly shave off 1-2 days of post production by not having to transcode for Final Cut. That results in cost savings that we can pass on to our customers and continues to keep our work in the high production value bracket without the high production cost. 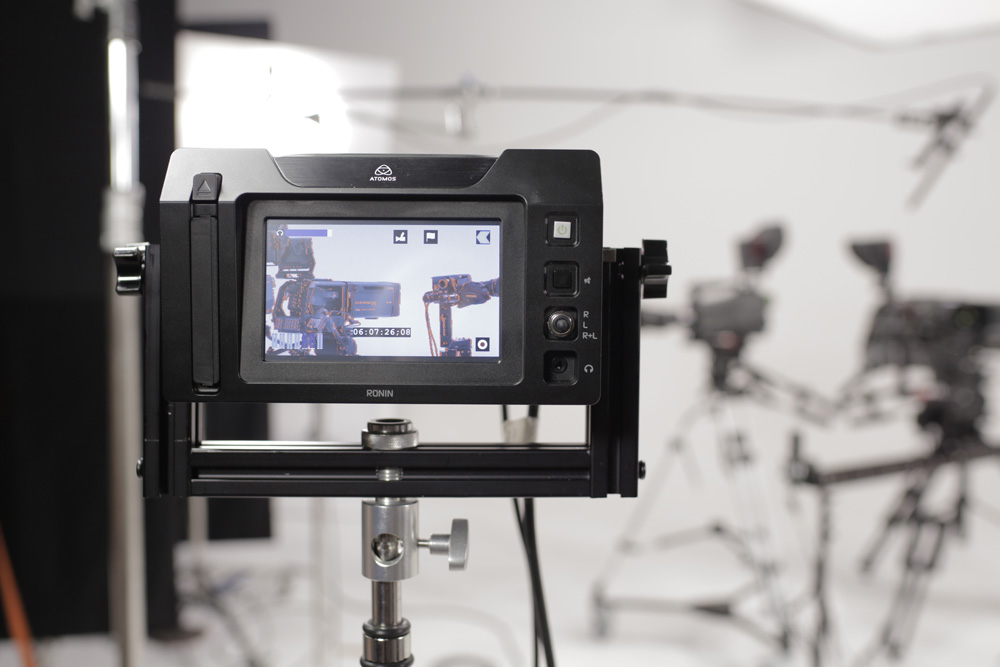 I also found the Atomos Ronin and Connect converters a valuable part of my workflow, as the Ronin's integrated power supply and full size BNC connectors are critical when I'm working in a studio environment and need to have a client side monitor setup for a remote camera or even as a backup recording. It allows me to integrate difficult overhead camera angles into my production with ease, all while still providing the 10-bit Pro Res content I need to give to my editors for faster post-production.

Anytime I have a shoot I always have one of each Connect on hand, both the S2H and H2S. This ensures that if I've got a signal path that is mismatched between HDMI and SDI I can always correct it. They are so easy to use and to carry around that often times I keep them in my back pocket, and I'm glad that I do because there's been more than a few times that the built-in flashlight has come in handy when wiring up the set. The portability and compatibility with my existing set of Sony batteries for the other Atomos products make them a great tool to have on hand for traveling and exterior productions.

We were really happy with how it turned out, but you can be the judge of that…

I'm very proud of that piece, but our latest Droptree production is a commercial for the New York Internet streaming company Aereo where we used the Samurai Blade in a DIT workflow. As you can see, the environment for this project was very different, but I find that the most important part of my job is preparation. Working in the studio can certainly bring with it a myriad of complications, but suffice to say that when you have a good crew on hand and you have prepared both your client and the talent for what needs to happen you can get through a production with ease. 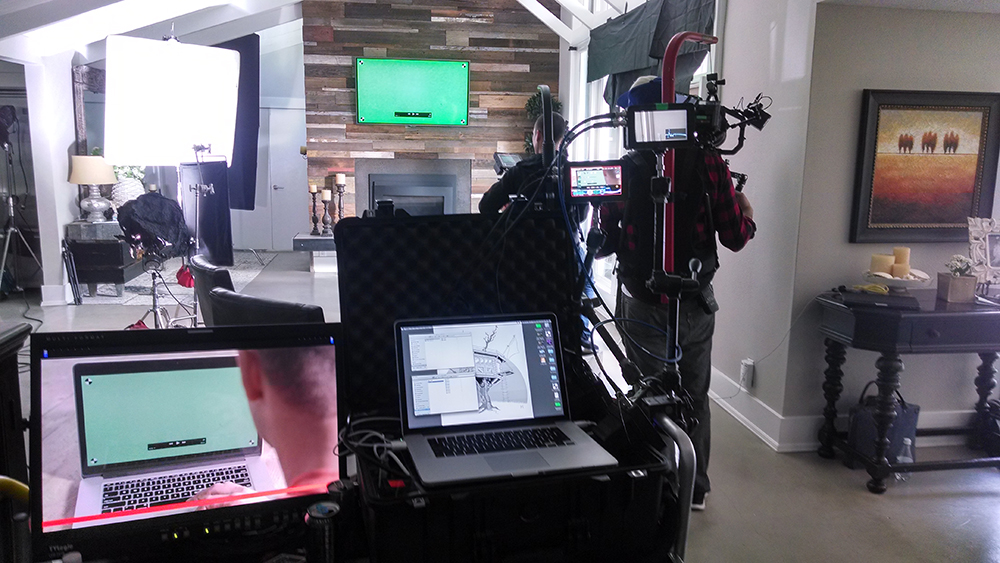 When I have an on-location shoot though, preparation takes on a completely new meaning. First off, I have to make sure that I'm prepared myself. Crew, equipment, props, talent, craft services and client all need to come together in a remote location and there are a multitude of variables that can and do go wrong. I have to be prepared to adapt as the production goes along and ensure that my director, crew and client all have everything they need to have a successful production in the intense time constraints that often come with location shooting.

So much of that preparation revolves around finding and using the right equiptment, and for this project the DP and 2nd camera are using a Sony FS700, and connected to that camera is a Teradek Bolt via SDI. This is then sending uncompressed 10-bit video from the camera wirelessly to the DIT station which is out of the scene and near the client Video Village. Our production kit contained pretty much the same equiptment as the Grass Valley piece. Our DIT station contained a custom pelican case containing redundant battery power supply, thunderbolt raid drives, and a plexi covering with fan for cooling of component and the laptop above MacBook pro connected to lightning drives, USB 3 backups etc. Along with two Atomos Samurai Blades, two Teradek Bolt Receivers, Manfrotto arms for mounting of Blades and two SDI monitors for client review. 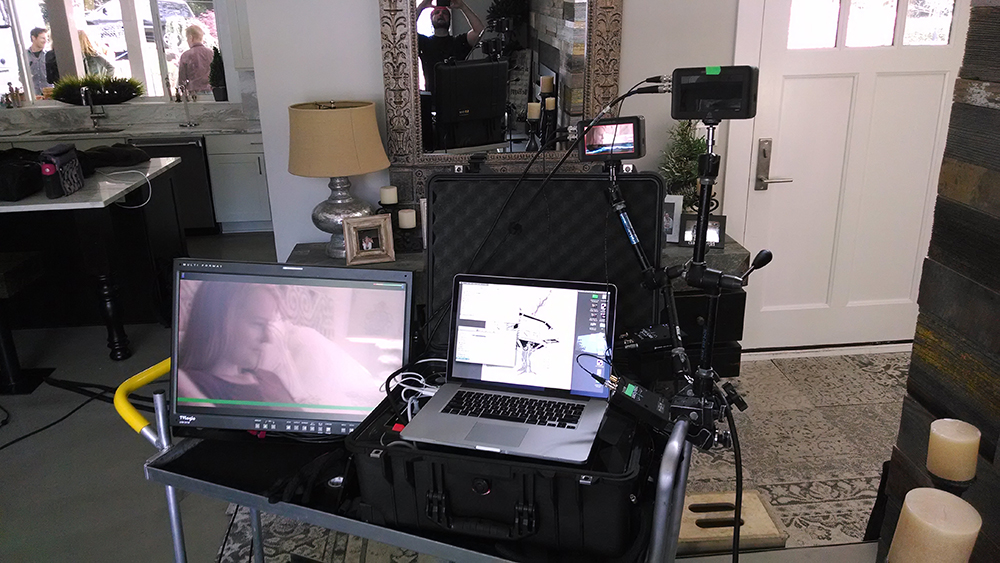 The DIT tech doubles as both a traditional DIT and as a VTR roll in the following workflow: The signal from the Teradek bolt is directly input into the Samurai Blade. The signal is then looped out to the client side monitors. The DIT is using the Blade actively during the shoot to give real time feedback to the DP of the levels and other critical diagnostics via reviewing the waveform monitors. At the same time the DIT is using the Blade to record the takes and is then able to instantly recall those clips as a VTR playback for the client to review. No cables have to be switched, and the Blade instantly outputs the video playback to the same monitor it was previously streaming the video to.

There are huge benefits here, as it saves us the cost of having to hire a VTR crew along with the extra equipment costs for all of that. A wireless uncompressed workflow allows the DP to go anywhere and never be encumbered by cables hanging off the camera. DIT placement next to client video village also allows for client input to be relayed to the DP instantly via crew walkies. It means the DIT can have confidence that the recorded material will be correct as they have the scopes to watch.

Again though, you can be the judge of how everything ultimately came together… 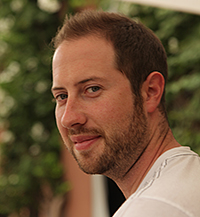 Faryl Kagan has worked in the video industry for over 15 years, and has been producing independently for the last 8. His work has taken him across the globe including; China, Japan, Australia, New Zealand, UK, Netherlands, Spain, France, Canada and all over the USA. Faryl has worked with and collaborated with some of the biggest names in the video and broadcast industry.