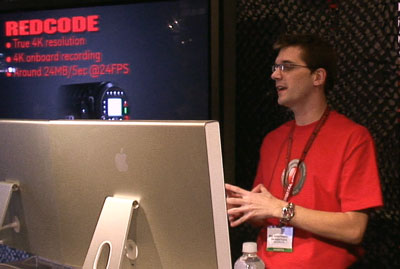 My love affair with RED Digital Cinema began in 2007, when my brief stint as demo artist in the NAB RED booth turned into a regular gig at events and trade shows. When I joined Autodesk as Product Designer to help bring Smoke to the Mac, I was quickly assigned to construct our first RED workflow. Back then, building a RED workflow meant exploring unchartered territory, but since then things changed rather quickly in the last couple years.

Discovering the potential of the RED ONE camera was an adventure in it’s own right. When I got a chance to play with an EPIC in the fall, I found it dangerously simple to use. Meaning, anyone can grab this camera and shoot stunning pictures and clips. Yes, even my mom, although she never drove me to a soccer game 😉
With the proliferation of Scarlet cameras since the November 3rd announcement, it’s safe to say that the future looks bright and red. Judging by the interest of the 68 students at REDucation Los Angeles last December, it’s also safe to asume that there will be a lot more RED files shuffled in and out of edit suites in the coming months.

Since that first RED workflow, Smoke has been continuously updated to comply with the latest RED SDK. In 2010, Smoke first supported the RED Rocket, and with the latest Smoke 2012 Subscription Advantage Pack, Smoke supports EPIC 5K R3D files, including HDRx – all of which work wonderfully with the RED Rocket.
The big benefit of working with RED in Smoke is that it offers a totally open workflow. You can import RED files to Smoke and conver them to RGB media, or work natively with the raw R3D files. You have the ability to dynamically set or change import parameters, such as debayering quality and HDRx exposure blending. If you edit with QuickTime or MXF proxies in your NLE of choice and export an XML or AAF to bring into Smoke, you can easily reconnect to the original R3D files at the resolution of your choice.
If you work with R3D files regularly, you should evaluate the potential benefits of adding a RED Rocket to your Smoke workstation. To quote Paul Andrews, Autodesk Solutions Engineer, “in some cases you could find that the RED Rocket provides pure bandwidth over 6 times the speed of CPU debayering. Further, offloading this task to a third party card frees up CPU resources to the application, making Smoke more robust. This alone makes a good case for the expense of the card”. Check out Paul’s latest Smoke webinar where he shows installation and configuration of a RED Rocket in Smoke.
While we’re really excited about using Smoke on a laptop, if you want to use the RED Rocket with Smoke today, you’ll need a MacPro. Although expansion chassis are available for MacBook Pro’s, such as the Mobile Rocket, to me, the most interesting offering is still forthcoming.
At IBC 2011, I had a chance to discuss a new, groundbreaking workflow with RED’s Ted Schilowitz. At a presentation in the IBC Digital Theater, Ted demonstrated RedCine-X running on a 15″ MacBook Pro, with the R3D files playing off a Thunderbolt LaCIE Little Big DIsk, pumped through a RED Rocket card sitting in a prototype Sonnet Echo Express Thunderbolt expansion chassis. The 4K images were scaled down and played back out the HD-SDI outputs of the RED Rocket to the projector. It was beautiful. Finally, a high-end RED workflow that’s portable.

Sonnet is promising availability of the Echo Express in the coming months. In the meantime, check out my interview with Ted for Area TV :