Dual Pixel AF is a huge addition to the XF605

Aimed at solo shooters and reality documentary-style shooting situations, the Canon XF605 is a feature-rich camera ready to be on the go with any production armed with a passport to far-flung sets. The Canon XF605 fits right in between Canon’s XF405 and XF705. Highlighted features found in the Canon XF605 included a built-in 15x optically-stabilized zoom, a 1-inch sensor with Canon’s wonderful Dual Pixel CMOS AF, and unlimited 4K video recording up to 60p. Add in a semi-truck load amount of in/out connectivity, and you have a very flexible 4K camera.

Canon’s XF605 1 inch sensor is designed for video capture with 8.29 Megapixels in a 16:9 4K area without scaling or cropping. Behind the XF605s 1 inch sensor is Canon’s DIGIC DV7 processor helping the camera capture 4K from 24p to 60p in 10-bit 4:2:2 unlimited recording. Users can choose between Canon’s native XF AVC format, H.264 or H.265 encoding, all with a choice between several color profiles with my personal favorite of Clog3 available for those projects where color grading is available. 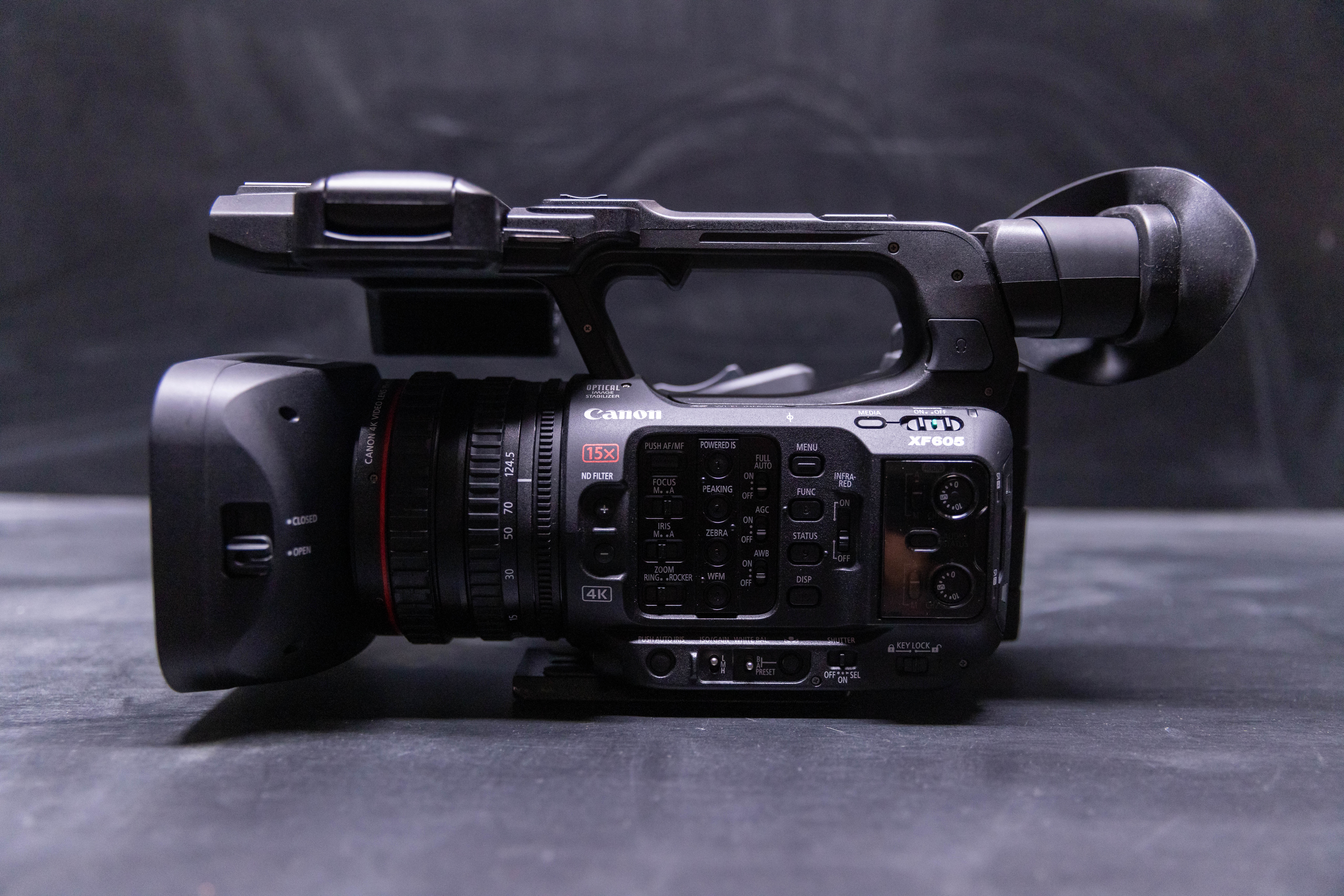 One thing that stood out to me immediately with the Canon XF605 was the menu familiarity from the XF605 and my usual camera, the Canon C300 Mark III. If you use Canon Cinema cameras and pick up the XF605, the menu will feel similar with all the sub-menus and settings in much the same location from one camera to the other. This kind of detail is helpful for us shooters who might bounce from one camera to another often.

The defining stand-out feature, at least for me, is the Canon XF605’s Dual Pixel CMOS AF. I always found pulling focus with a single-lens camera to be a process of over-correcting and then under-correcting until I eventually find focus. Not exactly the best way to operate if I can rip on myself for a bit. 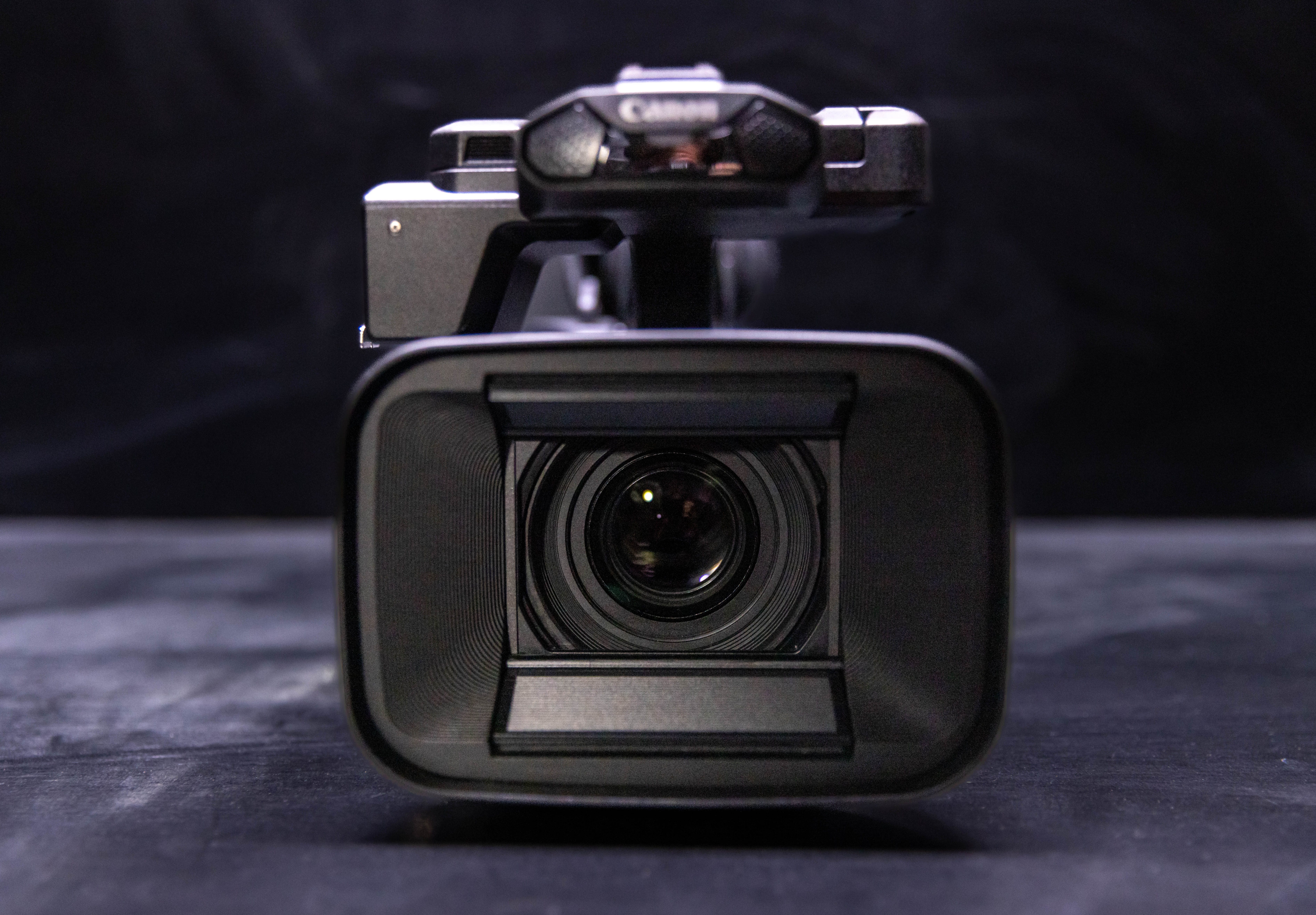 The Dual Pixel CMOS AF on the Canon XF605 means you, the operator, can let go of the focus ring and get on with framing up the shot. I found the face recognition setting on the XF605 to be just almost as fast as an R5 or C300. As usual, the camera does better nailing critical focus on a more consistent basis than I do myself. Internally, I found a well-executed Dual Pixel CMOS AF gives me a ton of confidence in my shooting, and knowing what I shot will be in focus. Know the inclusion of Canon’s Dual Pixel AF Eye-detection in the XF605 is the first time this incredible feature found its way into a single-lens camcorder. Additionally, Canon’s EOS iTR AF X (head detection) keeps your camera focused on your subject even after turning their head to the side or away from the camera.

In Slow/Quick mode, while shooting at High Frame Rates for slow motion, the Dual Pixel CMOS AF loses face/eye recognition but object tracking and focus work nearly as well. I do not usually see a ton of single-lens camera slow-motion footage floating around, but if you are going to capture 60p for slow motion, you will need to use object tracking.

Speaking of Slow and Fast recording, the XF605 can record up to 120 fps in Full HD and 60P in 4K. Both are incredible features that extend the flexibility of the single-lens camcorder 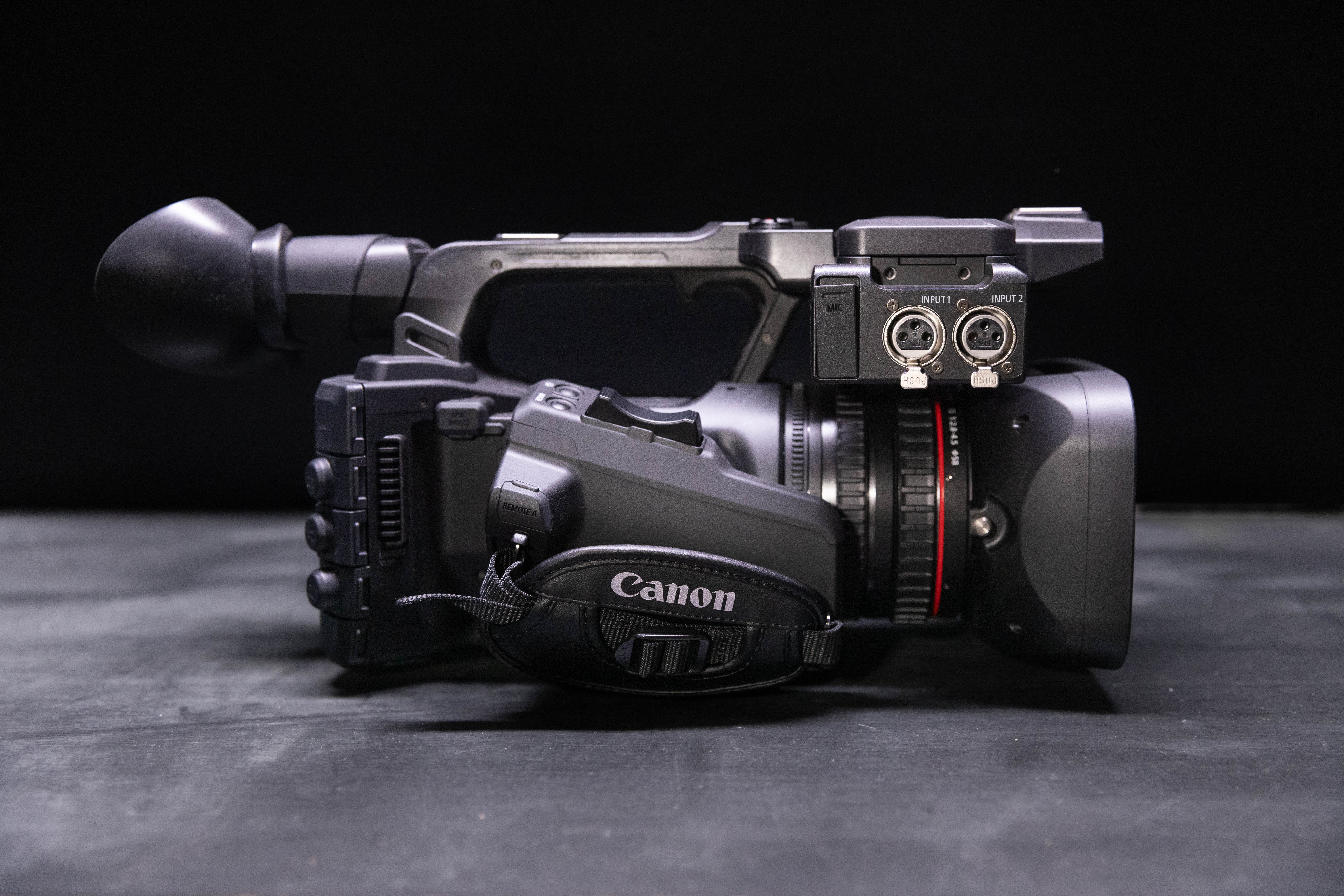 The Canon XF605 comes with a 15x optical zoom with an equivalent 25.5-382.5mm range. The maximum aperture is F/2.8. That F/2.8 does not work throughout the entire zoom range. I found aperture stops down to F/4.5 around the halfway point on the zoom range. The change from 2.8 to 4.5 is a ramp closure and a smooth transition while you zoom through the lens range.

If you are going to hand-hold a camera, know the XF605 comes with a 5-axis Optical Image Stabilization (IS) system with three separate modes of image stabilization: Standard, Dynamic and Powered. According to Canon, Standard IS mode; the stabilizing angle is made constant, independent of the zoom magnification. Dynamic IS mode extends the stabilizing range at the wide end of the focal length, allowing for image stabilization when shooting while walking. Powered IS mode helps facilitate stabilization in the low-frequency range at the telephoto end of the zoom and should be used exclusively for fixed-point shooting, which does not involve panning.

Like most professional single-lens camcorders, the Canon XF605 has a built-in ND filter system. Users have four filter options, clear, 1/4, 1/16, and 1/64 densities. Interestingly, when shooting Clog3, I found that the camera’s lowest ISO stops at the camera’s base ISO. On bright sunny days, the Clog3 lowest ISO and strongest ND density are insufficient to allow you to shoot at wider apertures like F/2.8. If you are shooting Clog3 in super bright scenarios and want a shallower depth of field, you will need to screw on an additional ND filter on the lens. 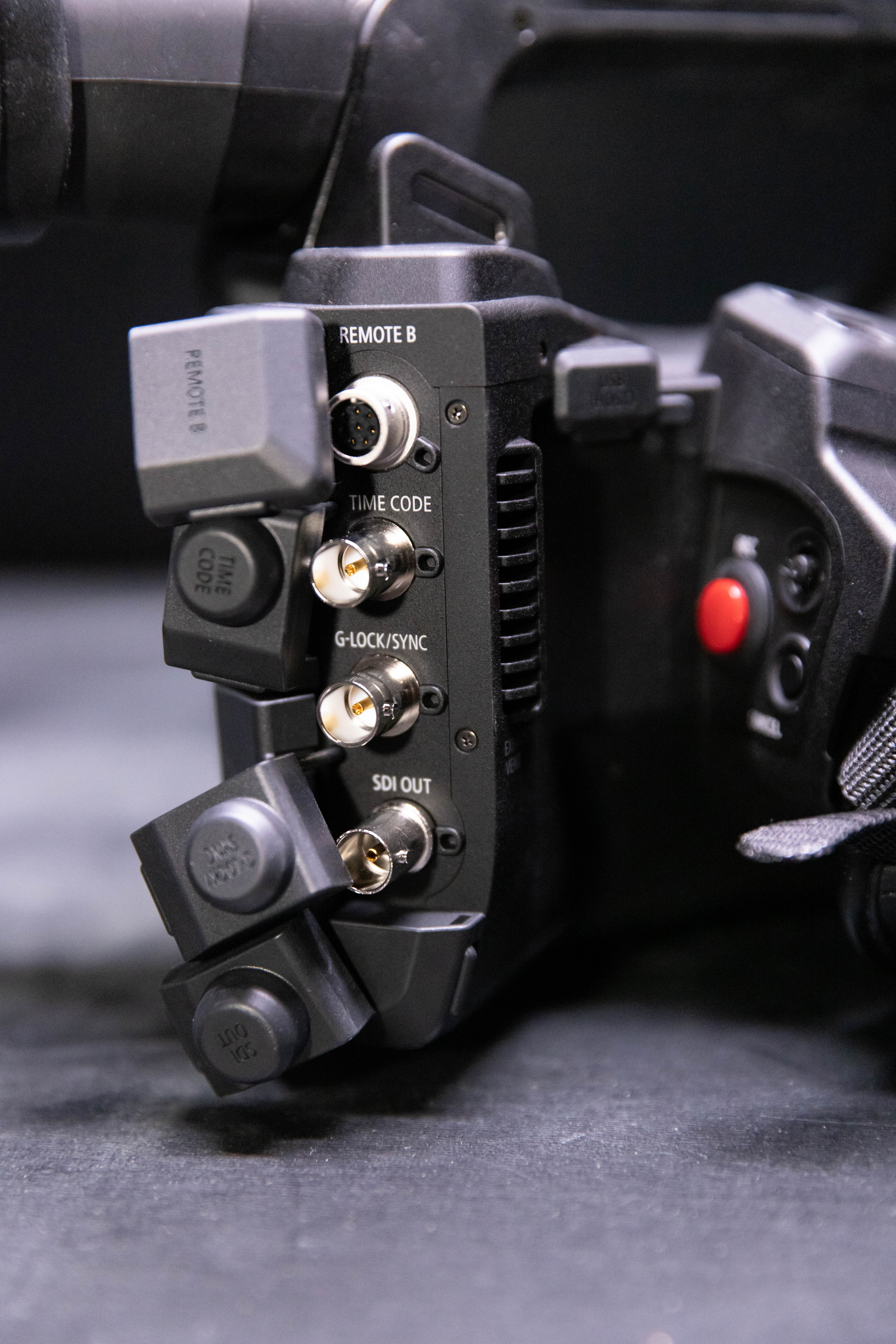 Thankfully, the advancement of LCD monitors has marched along enough to give shooters some pretty good options for monitoring. The 3.45 inch LCD touchscreen on the Canon XF605 can fully articulate folds out and has a resolution of 2.76 million dots. In most situations, the LCD touchscreen is bright enough. On a sunny Southern day, I found the touchscreen to be a bit too dark for confident use outside. This is true of nearly all LCD screens, so do not let this bother you. Practically zero cameras come with a super bright LCD.

That’s why cameras like the XF605 come with a 1.77 million-dot EVF. Canon’s Electronic Viewfinder is small but surprisingly clear and more than good enough to use. I found myself preferring to shoot with the EVF over the LCD screen when I held the camera near shoulder height. When shooting with the camera below shoulder height, I used the LCD screen because of its articulation and ease of use. Being able to bounce from holding the camera high to low quickly is a defining feature of single-lens camcorders and helps shooters capture different perspectives rapidly.

Canon put a pair of 3-pin XLR jacks on the XF605 and a single 3.5mm mic input for audio options. Additionally, a standard headphone plug comes with the XF605, a full-size Type-A HDMI output, a USB-C port, and a 12G-SDI BNC connector. The XF605 also supports IP Streaming with an additional add-on.

Debuted on the XF605 is Canon’s new multi-function shoe. The first accessory is TEAC’s high-definition XLR mic adapter, which lets you assign XLR inputs to all four audio channels. I want to see the multi-function shoe make its way to all of Canon’s Cinema line-up.

The Canon XF605 has great battery life. I could film for over 2 hours on a single canon battery. A couple more batteries and one can shoot all day if needed.

I found a touch of rolling shutter while shooting in 4K and HD. The effect was not too bad, but for those fast-paced shoots with a lot of motion, you might want to consider the XF605 does have a bit of rolling shutter but not enough to be a deal-breaker.

All in, Canon made a wonderfully capable camera with the 4K XF605. I found the 4K to be easy to capture and the image to have the wonderful “Canon Color.” Dual Pixel CMOS AF is a blessing to have in any camera and even more so in a single-lens camcorder like the XF605. Feel confident to take the Canon XF605 anywhere because all you need is the camera, a few batteries, and standard SD Cards, fast enough to capture 4K, and you can make just about any content. 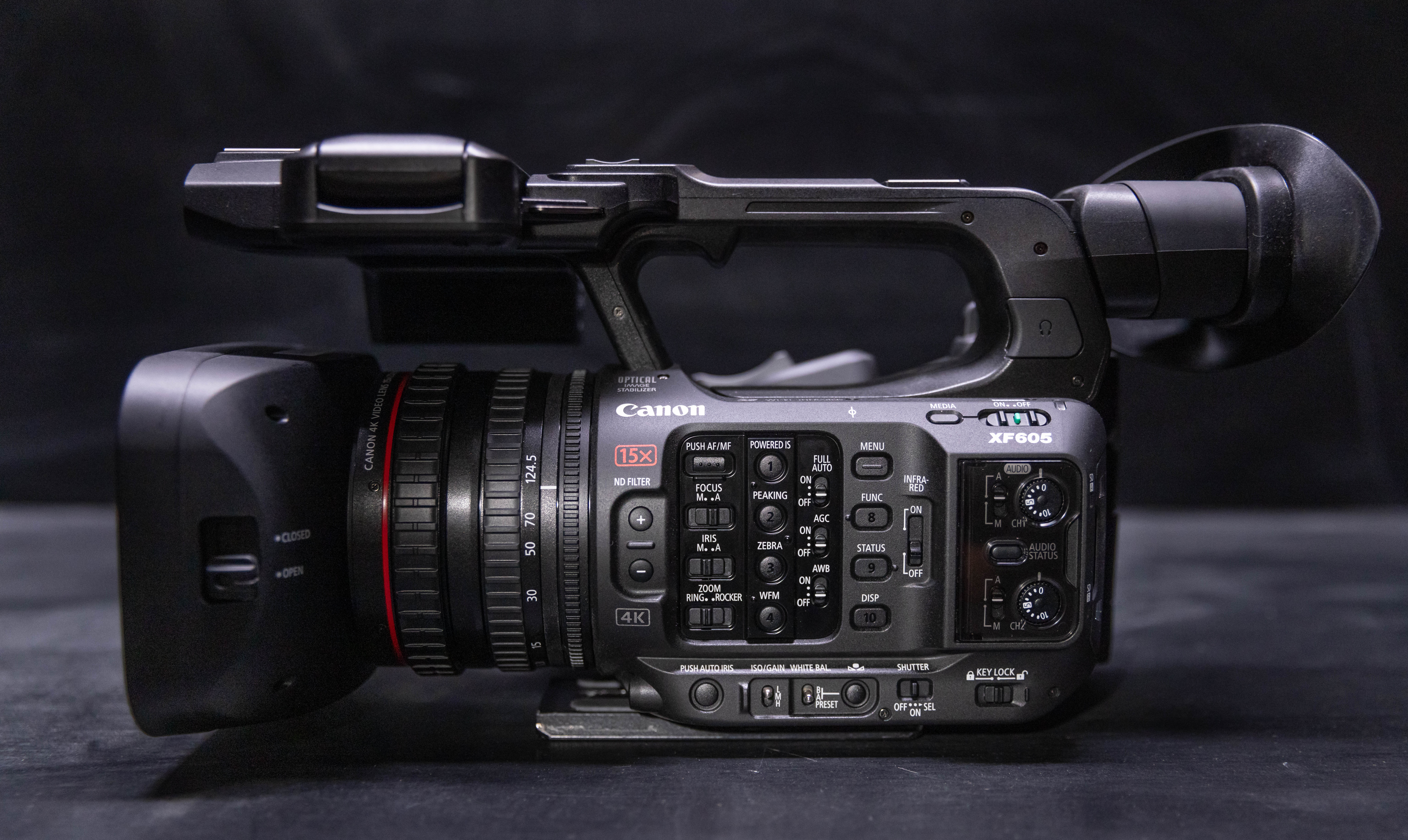