A shift is happening in optics. As a trade, are we going from a Euro-centric lead on cinema glass to a burgeoning upstart industry from the East? Depending on the price range and specific features offered by manufacturers, then yes. The shift seems to be happening. Change can be good, but change is also challenging. Does the Laowa OOOM 25-100mm signal more change is coming? 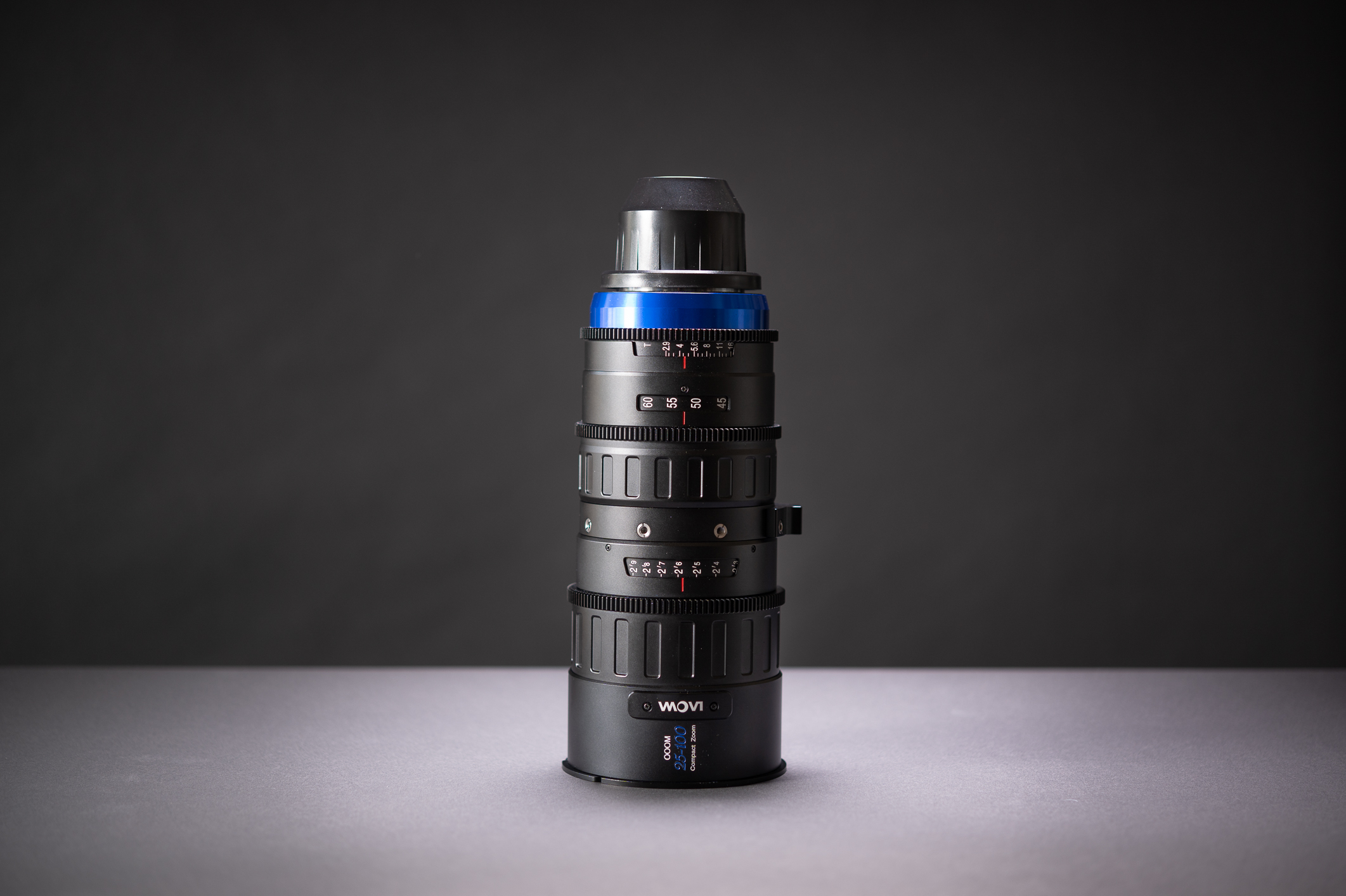 One can say, Venus Optics’s Laowa built its brand reputation on niche lenses. The old marketing adage states: “It is better to be different than it is to be better.” Take one look at the Laowa 24mm Probe lens to see the difference in action. So, how does the first traditional cinema lens by Venus Optic’s, the Laowa OOOM 25-100mm T2.9 Cine Lens stack up against a large market of cinema lenses while retaining its difference and appeal?

The introduction of the parfocal Laowa OOOM 25-100mm T2.9 Cine Lens was un-expect at the 2019 NAB convention. Also, remember conventions? Yea, those were great. On the Las Vegas floor, Laowa showed off a mid-range cinema lens to curious onlookers. It was the first iteration of a pre-production model of the Laowa OOOM concept. What was different with the Laowa OOOM over the Zeiss 21-100? or Angenieux EZ Zooms? The first difference was the price.

As I write this post, the Laowa OOOM 25-100mm T2.9 Cine Lens lists for $5,000 online. A steal for a cinema lens boasting a vintage feel and near-zero focus shift. Throw in a handful of lens mounts and a hard case, and the $5,000 for the Laowa OOOM 25-100mm T2.9 Cine Lens may be hard to pass up. If you want the purpose-built full-frame optical adapter and rear anamorphic adapter, then the price moves up to $6,500.

The all-metal housing of the Laowa OOOM 25-100mm with the heavier URSA Mini Pro 12K built a sizeable camera package balanced well if a touch heavy. That being said, I like my lenses to be solidly built. Typically, the life of a cinema lens purchase will last longer than a new digital cinema camera. A lens like the Laowa OOOM 25-100mm is a lens built to last for years and constant production abuse.

Mechanically, the Laowa OOOM 25-100mm felt good in the hand. Zoom, focus, and aperture rings were smooth, with just the right amount of tension—neither sloppy nor too tight. The focus ring has a 300° focus rotation. All three rings feature cine-standard gears for ease of use with available lens control accessories such as a follow-focus and/or lens control motors. The lens features a 95mm front filter thread and a 100mm front and includes a 100 to 114mm step-up ring.

The Laowa OOOM is parfocal, allowing the focus to remain constant throughout the zoom range. I prefer parfocal lens designs and the ability to zoom in to find critical focus on a subject. The Laowa OOOM arrived with calibrated focus needing zero shimming with the Blackmagic Design URSA Mini Pro 12K. 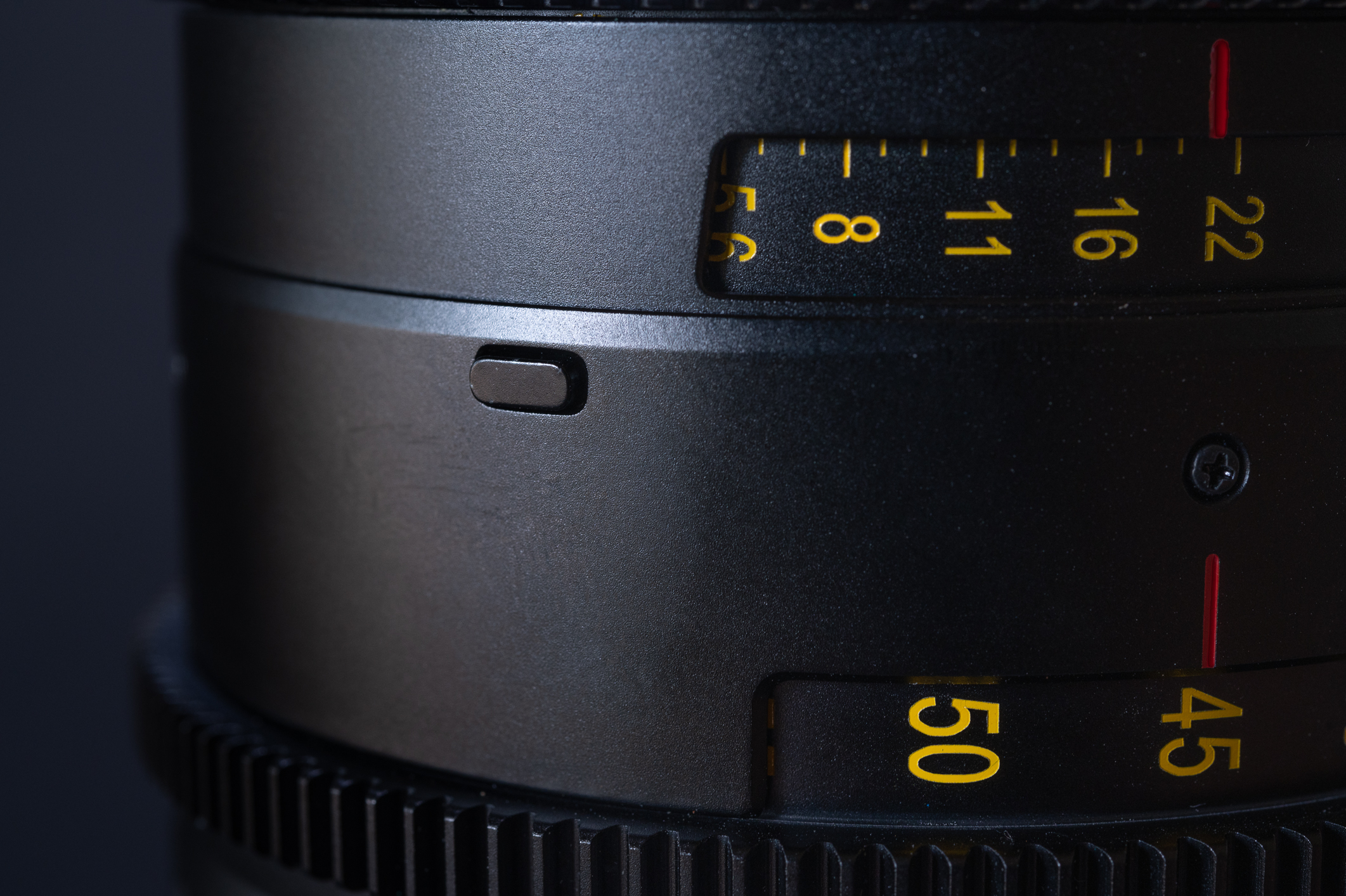 Interestingly, the Laowa OOOM 25-100mm also has a small button built into the zoom ring. Pushing the button and turning the barrel reveals the anamorphic zoom markings for those times when users mount the optional rear-anamorphic adapter. A handy feature for those who opt to shoot anamorphic.

Since a lens like the Laowa OOOM 25-100mm will likely last a lot longer than one’s current digital cinema camera Venus Optics made sure to give users lens mount options. In the $5,000 kit, the Laowa OOOM 25-100mm comes with PL, EF, and E mounts. These three options cover nearly all available cinema cameras on the market now and in the near future. 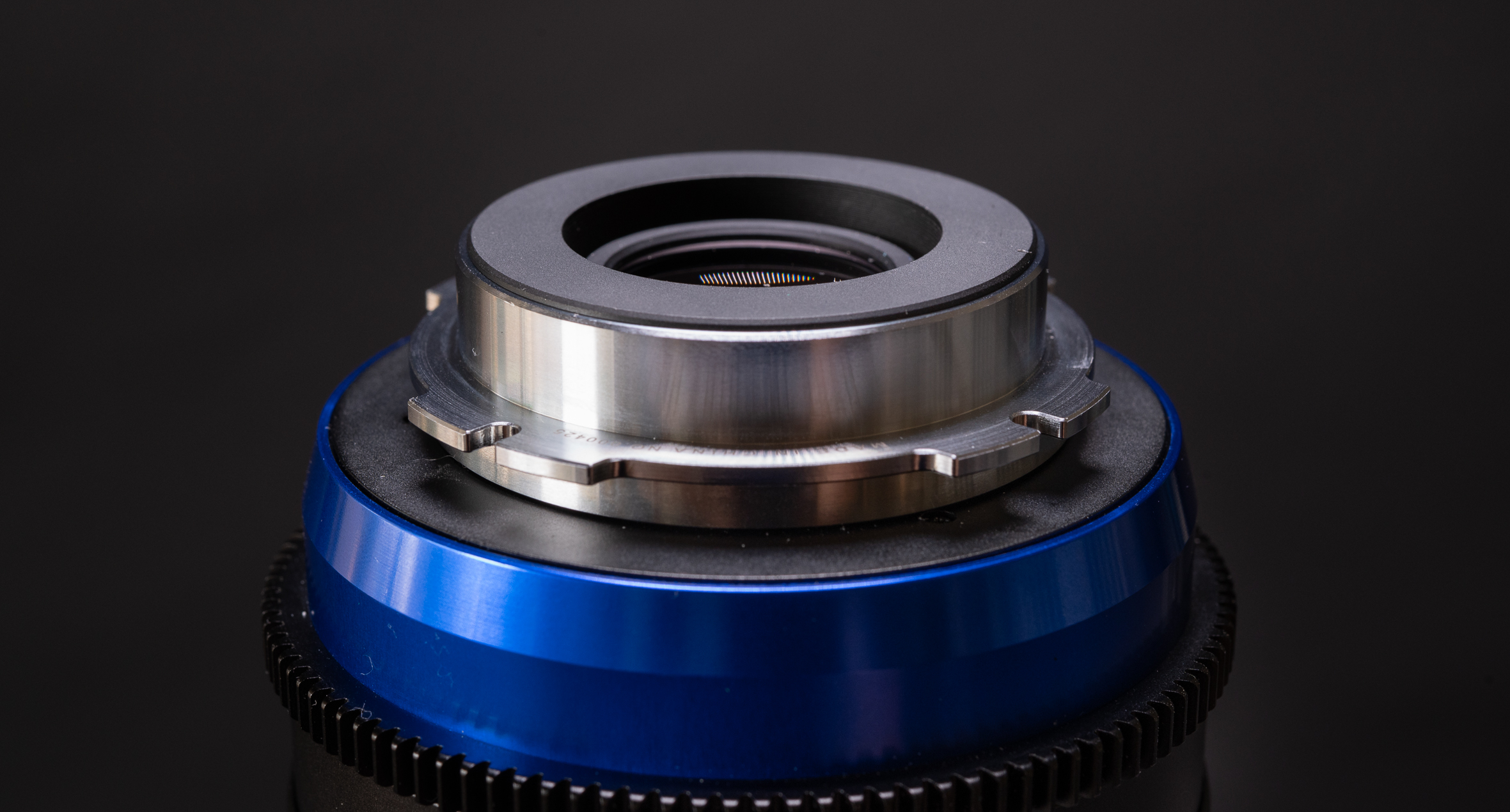 Build quality, image circle, and focus rotation are all great topics to discuss. However, often it is a lens image quality, combined with other features, that cause a lens to be pulled out of a case and mounted onto a camera. Venus Optics states the Laowa OOOM 25-100mm possess a “vintage” look. I think what Venus Optics achieved with the Laowa OOOM is a less than clinical sharpness with a slightly warmer look. I have shot with vintage lenses many times on past productions, some good and some bad and some very bad, and I think the Laowa OOOM bears a touch of a vintage lens’s softness without all the imperfections. In the news piece below, I used the Laowa OOOM 25-100mm T2.9 with the Blackmagic URSA Mini Pro 12K for the interview. I shot 4K Blackmagic RAW with a single LitePanel Astra 6x bounced into a 4×4 silk.

I quite liked the image. It felt organic without much chromatic aberration. It felt soft without difficulty focusing on the LCD monitor on the Blackmagic URSA Mini Pro 12K side. Do I dare say this next bit… the Laowa OOOM felt more Cooke than Zeiss but in a far less expensive way. That last statement may be a bit of a stretch and hyperbolic. Make no mistake, though, the Laowa 25-100mm OOOM is not a Cooke, and I make that statement because the OOOM shares some of the warmth usually found in a Cooke lens. When mounted to the URSA Mini Pro 12K, the Laowa OOOM shined. The camera lens combo paired well together.

In a video I shot with the URSA Mini Pro 12K and the Laowa 25-100mm OOOM, a shot of a wet spider web appears about 14 seconds into the video. In the highlights, the image seems to show fringing. I think this purple hue is more of a combination of the water droplets and sunlight, creating a kind of rainbow. If you look, you can see the blue spectrum beginning to appear on the left of the purple in the spider web. I could not replicate any other fringing in any of my other tests.

When I used a handful of different budget cinema lenses, the close focus capabilities tend to be where the corner was cut to keep the cost down. The Laowa 25-100mm T2.9 features a close-focus limit of under 2′, making it a flexible choice for tighter close-ups and allows you to shoot in limited-space environments. The good “under 2 feet” of close focus is hardly cutting a corner by Laowa. With the Laowa 25-100mm, I felt the close focus was more than enough. I never felt like I needed more or a need to reach for a diopter. In the video of fog, you can see just how close I can focus on the leaves. The close focus worked on both the wide and telephoto ends of the zoom. 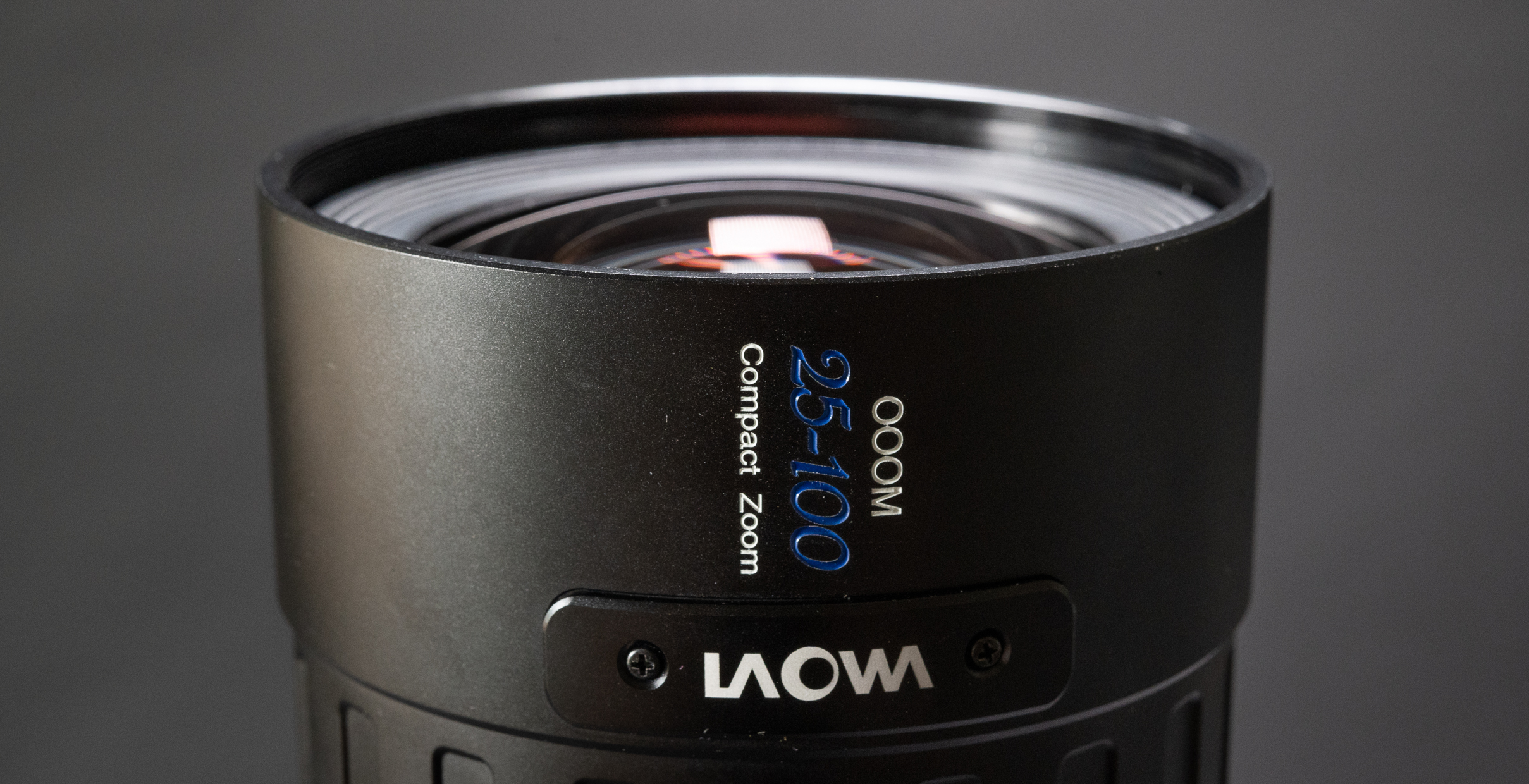 The competition for the Laowa 25-100mm is fierce. Sigma offers their cinemized 18-35mm and 50-100mm but are two different lenses matching Laowa’s 25-100mm at all but the widest focal lengths but is more expensive as a combo. The next set of lenses competing with Laowa is the DZOFilm Pictors, which come 20-55mm and 50-125mm. The price for the two-lens set of Pictors is $4,499, but you have two lenses compared to one lens like the Laowa. I’ve tested DZOFilm’s MFT lenses, the 20-70 and 10-24, and I found both to be a little soft and not easy to focus when using an LCD zoomed in for focus assisting, so I will lean more toward the Laowa as a personal choice.

All in, I think the Laowa 25-100mm T2.9 is a great lens, especially for the price of $5,000. Laowa also has fore-thought and offers a 25-100mm lens kit, including a purpose-built full-frame image expander and a rear anamorphic adapter. The few knocks against the Laowa 25-100mm have to do with the lens’s weight and a slight ghosting flare when shooting at 100mm without a matte box. I liked the Laowa 25-100mm. On the Blackmagic URSA Mini Pro 12K, the lens performed wonderfully. I can see many owner/operators buying the Laowa 25-100mm to use as a standard cinema lens for most shooting situations. 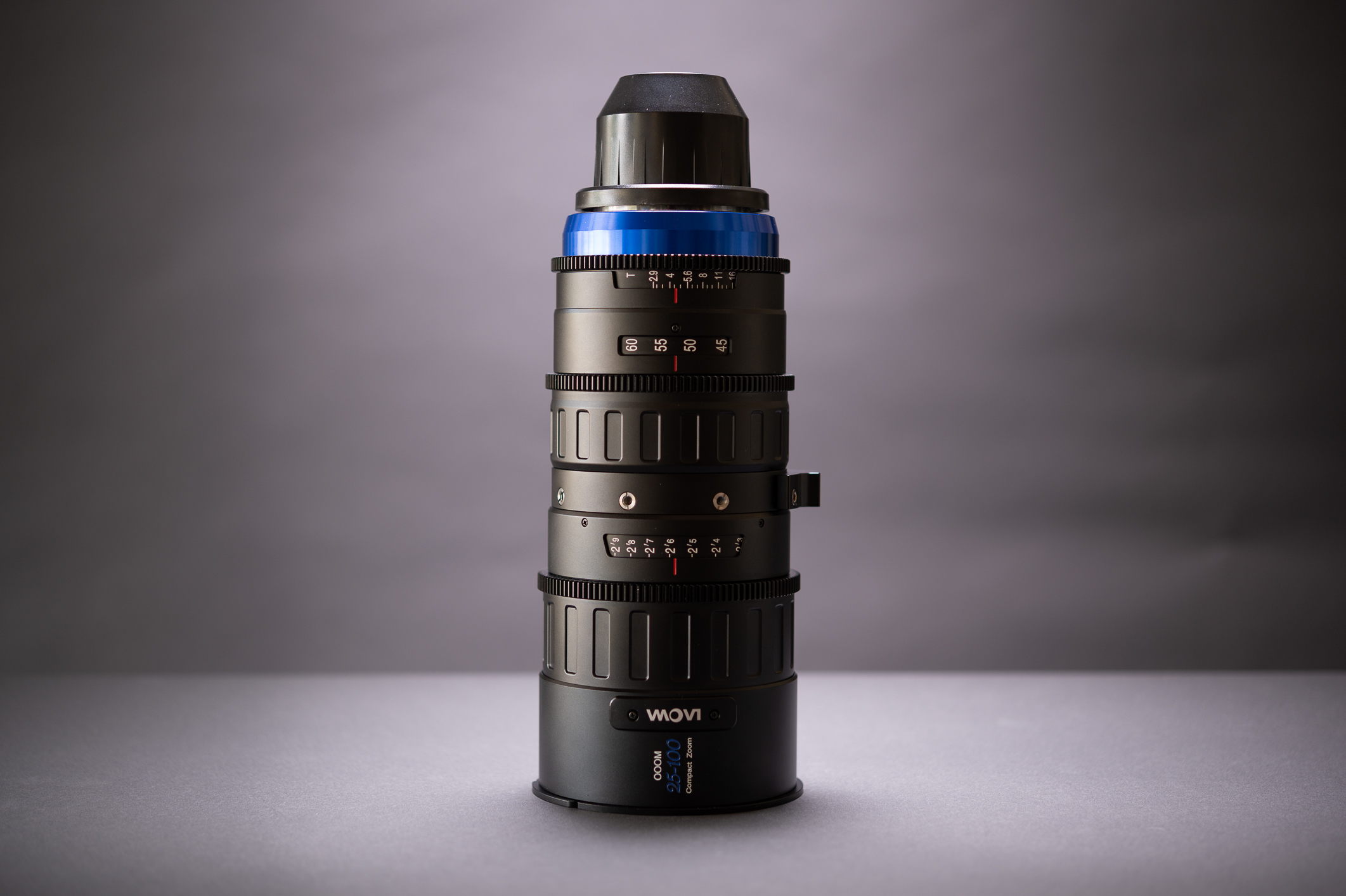