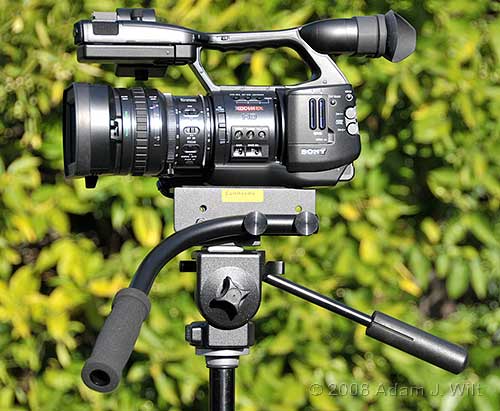 The $220 Camhandle looks like a tripod handle gone AWOL from its tripod. Its attachment plate bolts to the underside of the camera, and it hangs off the left front side. It looks goofy, but it works surprisingly well. I tested it for two weeks on the notoriously hard-to-handhold PMW-EX1.

The Camhandle is comprised of simple elements elegantly assembled.

Its base is a six-inch-long piece of two-inch aluminum angle (what the metallurgically unenlightened might call “angle iron”), with various mounting holes drilled in it and a thin neoprene-like cushioning layer on its top. A camera attachment screw passes through any of six holes to hold the camera firm against the neoprene cushion, which discourages the camera from rotating. Two 1/4×20 camera screws with one-inch-diameter thumbwheels are provided, a bright yellow one with a short shaft (a little too short; less than one turn of threading is available to engage the camera’s socket), and a bright red, longer one(which was almost too long for the EX1’s socket). The base has a tapped hole at the back to thread the chosen screw into when it’s not being used to hold a camera in place, so it won’t get lost—a nice touch.

The Camhandle itself is a fifteen-inch tube, drilled for attachment bolts and bent such that when mounted it deflects leftward and down about 45 degrees. The far end has a cushy foam grip, comfortable yet firm.

The handle mounts to the base using two attachment bolts fitted through any of several holes in the base, allowing several inches of fore-and-aft adjustment as well as level or angled mounting. Form-fitted spacers between the base and handle ensure a rigid, wobble-free fit. The mounting bolts and their securing nuts have glossy black thumbwheels; you can fully assemble and adjust the Camhandle without tools.

Another, shorter bit of aluminum angle serves as the tripod adapter. It mounts to the base using the same attachment bolts as the handle, and/or additional ones (which are provided). It’s tapped for a 1/4×20 tripod screw and has a slot for the tripod’s anti-roation pin. Depending on which sets of holes you use, the combined base and tripod mount raise the camera either 2.5 or 3 inches above the tripod’s mounting plate. 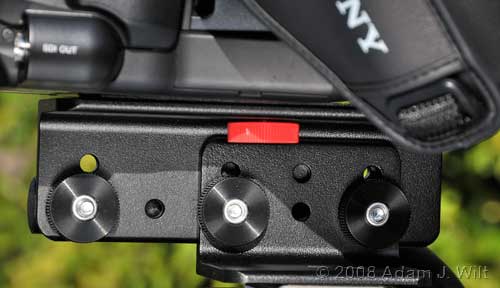 Right-side view of base and tripod adapter, with the EX1 on top.

The structural bits are powder-coated with a textured, durable black finish that resists scratches. After two weeks, the only sign of use on my loaner unit is a slight scoring around a hole on the base where one of the bolts used for the tripod adapter has bitten into the finish. Fit and finish is excellent overall, with only one quibble: the tapped holes in the base and tripod adapter were a bit raw, with the threads slightly “sticky” until a camera screw or tripod screw had been run through them a couple of times.

The system allows for the direct attachment of a FireStore or other device with a standard tripod thread simply by reversing one of the handle attachment bolts, and Camhandle designer Bob Franco is working on a matte box attachment.

The Camhandle is primarily designed for use in conjunction with a Handycam’s side-mounted grip. The right hand holds the camera as it normally does, while the left hand reaches out and down to grasp the foam grip. With the camera’s viewfinder against one’s eye, the camera has a three-point support system.

In practice, it works better than it looks like it should. The left hand is far from the camera, so minor bobbles in hand position have less effect than if the hand were closer to the camera. The downward bend of the Camhandle lets the left elbow stay close to the body, or even braced against it, providing further support. I made several traverses of a hallway, both walking and running, with and without the Camhandle attached to the PMW-EX1. Camhandle-enhanced shots were noticeably smoother than shots without the Camhandle; it won’t replace a Steadicam, but it’ll get you perhaps halfway there.

I found that rotating the handle down about 15 degrees using the alternate set of mounting holes let me brace the Camhandle against my forearm while placing my left hand under the lens in its customary position. While it’s more tiring to operate this way than by holding the Camhandle’s grip, since my arm had to be held out from my body, it allowed me access to the all-important focus ring, while still yielding smoother shots than would otherwise be the case, and still being less tiring than holding the EX1 unaided. 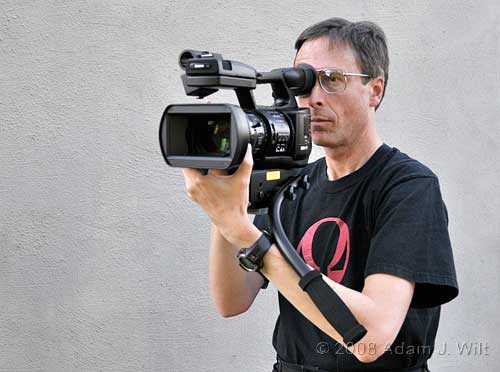 Angling the handle down 15 degrees lets me brace it along my forearm, leaving my hand free to focus and zoom.

(Of course, with a more remotely-controllable camera, like the HVX200 or DVX100B, I could fit a Bebob Foxi or Varizoom PFI focus controller to the Camhandle’s grip and operate focus remotely.)

On the plus side, the Camhandle is probably the least intrusive, least limiting support I’ve used; it didn’t get in the way when I wanted to drop the camera down to waist level the way some body-brace or shoulder-mount systems do. It’s lightweight and doesn’t impede normal camera operations. It’s quick to assemble, attach, and adjust, and its no-moving-parts design makes if robust and reliable.

On the other hand, I found I wanted more adjustments than the system allowed: I wanted to pull the handle further down and in, so I could brace it against my forearm with my elbow tucked against my side, or use it as a centerline handle. Unfortunately, the attachment of the handle to the base does not allow rotation about the handle’s axis: it provides a rigid mounting, but at the expense of rotational flexibility.

One minor drawback of the Camhandle is that a camera so equipped cannot be set down flat on the ground. With the tripod adapter attached, the camera can be set down carefully on the edge of a table with the handle hanging off the edge, but obviously this isn’t very safe.

When I shoot with a tripod that has two handles, I’ll flip the left handle around to stick out in front of the head, allowing me to pan and tilt with my left hand when my right hand is on the camera’s zoom rocker and start/stop trigger. The Camhandle works very well as this supplemental pan handle on tripods that have only one handle to begin with (as shown in the lead photo). I’d say that this use of the Camhandle is just as important and just as helpful as its use as a handheld stabilizer.

While the combination of the Camhandle base and tripod adapter look flimsy, they’re more than adequate to rigidly attach a six-pound camera to a tripod. I didn’t see any wobbles or vibrations due to having the Camhandle interposed between camera and tripod. It does put your camera 2.5-3 inches higher up than normal, which changes both balance and the appearance of tilts (as the camera now tilts in more of an arc, with the pivot point further away from the lens axis).

Again, I wanted more adjustability in handle positioning than the Camhandle allowed, but this was a minor gripe: the Camhandle still performed excellently as a secondary tripod handle.

I occasionally found that the camera wanted to spin on the Camhandle a bit; the dependence on the neoprene pads instead of an anti-rotation pin to prevent this spinning required a tight twist on the camera screw. However, the red screw was already within about a half-turn of bottoming out in the camera socket; I’d probably add a thin spacing washer between the screw and the baseplate were I to set this rig up again. The yellow screw was too short to securely engage the camera’s socket; it only went about 1/3 of a turn between first engagement and fully tight, so I didn’t feel comfortable trusting it.

Camhandle is useful addition to the toolkit, both as a low-impact handheld stabilizer and as a secondary tripod pan/tilt handle.

In handheld use it doesn’t provide quite the same degree of support as many of the body braces and shoulder rigs available, but it’s far less limiting than those devices; I could change from eye-level to low-mode shooting postures instantly, with no reconfiguration or dismantling necessary. The Camhandle made my handheld shots with the EX1 noticeably steadier without interfering with my normal shooting style, which on documentary shoots involves frequent transitioning between eye-level and low-mode angles.

On a tripod, the Camhandle provides a second, forward-pointing handle, allowing left-hand steering while the right hand is busy with the camera’s start/stop button and zoom rocker.

Choosing a camera support is a very individualistic thing, so I can’t say whether it will work for you. But I can say this: it works a lot better than you’d think from just looking at it. While it may seem pricey for a simple handle with a handgrip, its value as a stabilizer plus its added function as a secondary tripod handle may earn it a place in your camera bag.