A powerful yet inexpensive Android app for 48 kHz/24-bit audio recording from a digital USB source.

When I recently went to review the impressive iRig Mic HD-A digital microphone for Android, I searched for a third-party Android app to record 48 kHz/24-bit audio from a digital USB source. I found it with the US$6.71 USB Audio Recorder PRO. I purchased it, installed it on my OnePlus One phone/phablet, and it worked very well. Ahead you’ll find what I loved, and what I hope they add to it in the future. 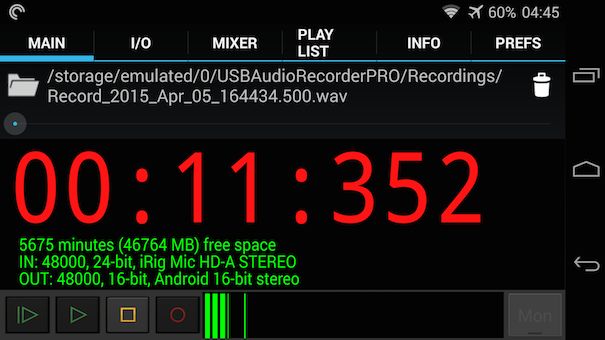 When I recently went to review the impressive iRig Mic HD-A digital microphone for Android, I searched for a third-party Android app to record 48 kHz/24-bit audio from a digital USB source. I found it with the US$6.71 USB Audio Recorder PRO. I purchased it, installed it on my OnePlus One phone/phablet, and it worked very well. Ahead you’ll find what I loved, and what I hope they add to it in the future.

Link to recent review of the iRig Mic HD-A 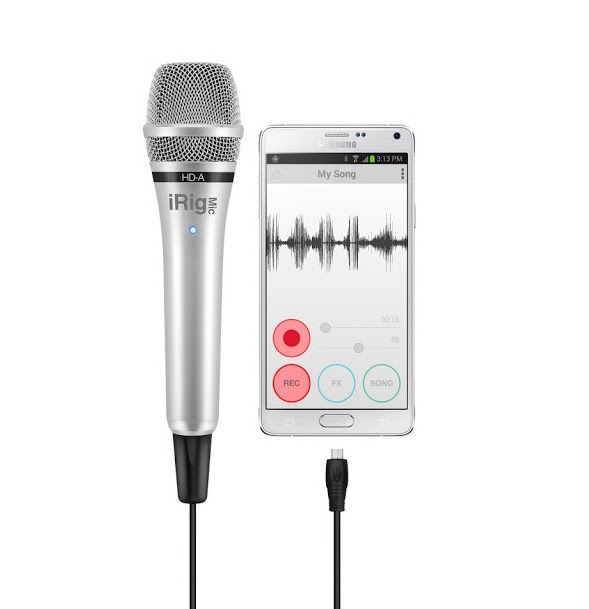 Here you may see my Review: iRig Mic HD-A digital microphone for Android.

As of the publication date of this article, USB Audio Recorder PRO is currently at version 1.3.9, and was updated quite recently on December 22, 2014. It currently requires Android version 3.1 or later and a device that supports USB host mode. The developer also explains that if your Android device does not have a full-sized USB port, you’ll need a USB OTG cable. As I explained in my review of the iRig Mic HD-A digital microphone for Android, that mic already includes the required OTG cable. In fact, the one that comes included works in a way that simplifies the connection, makes it more direct and esthetically pleasing, since it goes directly from point A (the microphone) to point B (the Android device with micro USB connector), without the need of adapters. (It’s too bad that —to my knowledge— there isn’t any such direct cable available for the AT2005USB hybrid mic I love so much—but uses a mini USB, so that type of device would have to use its original USB cable plus the OTG adapter.)

I did my tests using CyanomagenMod 11 based upon Android version 4.4.4, since it was just before the update to one of the two possible options based upon Android Lollipop 5.x was released for the OnePlus One phone/phablet (CyanomagenMod 12 and the new OxygenOS). Although so far, I have only used the USB Audio Recorder PRO app for Android with the iRig Mic HD-A digital microphone, the list of compatible digital audio devices is quite large, as you can see it on the developer’s website. In fact, many of the digital audio devices —both microphones and interfaces— that are compatible are also among the ones that I have reviewed in the past for iOS (iPad/iPhone/iPod Touch), Mac, or Windows. Those include the ART USB Dual Pre (covered here), Audio Technica AT2005USB (reviewed in multiple articles and ebooks), Avid FastTrack Duo (covered here), IK Multimedia iRig Pro (reviewed here), IK Multimedia iRig HD-A (reviewed here), and Sound Devices MixPre-D (reviewed here). But there are plenty more, so you should check the developer’s website for others.

The developers are also quite careful to clarify which devices are actually owned by them (and therefore tested in house), as opposed to others, which have simply been reported by users. If you want to verify whether your Android device and/or your digital audio device is compatible before purchasing, the developer offers a free app for that purpose. I was optimistic that the USB Audio Recorder PRO app, the iRig Mic HD-A digital microphone, and the OnePlus One would all work together, so I purchased the app without first trying, and fortunately it did work to make a perfect 48 kHz/24-bit WAVE recording, as you may have heard in the iRig Mic HD-A digital microphone review. (See also my recent article: Understanding 24-bit vs 16-bit audio production & distribution).

Does the USB Audio Recorder PRO app allow for live monitoring while we record?

It is best to be able to monitor live using isolating headphones while recording to become aware of any potential issue and correct it immediately. The answer is yes and no. Yes, USB Audio Recorder PRO does offer live audio monitoring while recording, but only to the same USB audio device, not via analog to the Android’s headphone output. The developer explains that there would be too much latency to do it from digital to analog live. This has been a known issue with Android (as opposed to iOS) and has been pointed out by several other developers and users. As I clarified in that review, unlike many other digital USB microphones and other devices, the iRig Mic HD-A from IK Multimedia doesn’t offer any headphone output. That means that our only confidence when recording with the iRig Mic HD-A to USB Audio Recorder PRO is the visual audio meter in the app, which is certainly much better than nothing. On the other hand, several other USB microphones and preamp/A-to-D converters do have their own headphone output.

If you read my review of the iRig Mic HD-A, you also know that I purposefully did not review any of the IK Multimedia apps, since so far, none support 48 kHz, which is the absolute standard for digital audio for today’s video formats. However, even though I didn’t review it, I did test this live monitoring feature in the iRig Recorder app from IK Multimedia. Just as explained by the USB Audio Recorder PRO’s developers regarding their reason why not to offer live monitoring from digital to analog, the latency was intolerable when attempting to monitor live with the USB Audio Recorder app, at least with the OnePlus One and the CyanomagenMod 11 (based upon Android 4.4.4). I only mention this to back up the USB Audio Recorder PRO developers’ statement.

The live monitoring on USB mics with a built-in headphone jack varies. For example, with the AT2005USB, you will always hear yourself with zero latency directly from the headphone jack output, even if your recording or teleconference software doesn’t offer live monitoring of your own voice. With the AT2005USB, you will also hear playback from the connected device, or the other people connected live on a Skype or other teleconference app.

On the other hand, with a studio microphone like the RØDE NT-USB (reviewed here), you can certainly hear yourself directly as in the case of the AT2005USB, but there is a knob to adjust the balance to determine how much you hear directly, and how much you hear from the device. That way, if you have a setup (hardware and software) that offers tolerable latency from the device, you could move the knob to the extreme position where you only hear directly from the device, in order to have even more confidence than you would if you only heard yourself directly.

For the review of the iRig Mic HD-A from IK Multimedia, I recorded a 48 kHz/24-bit uncompressed WAVE file. That is not a stereo microphone. Since there was only a single sound source, I certainly didn’t want to record “stereo”, since it would have doubled the file size with no benefit: The same signal would have been recorded twice. 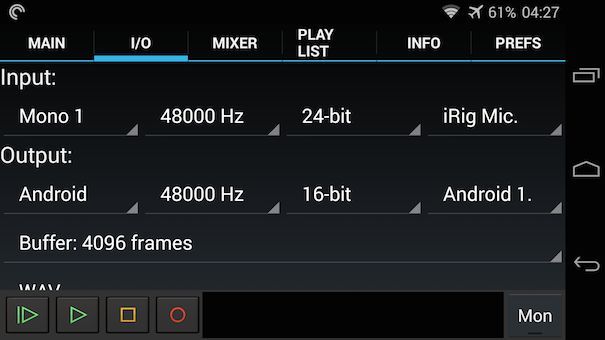 In addition to recording as an uncompressed WAVE (as I did) or AIFF file, USB Audio Recorder PRO also offers the option to record compressed files like FLAC or Ogg. I didn’t try any of those.

I found USB Audio Recorder PRO to be very stable and reliable, and it generated the exact time of file I wanted: 48 kHz/24-bit WAVE mono. If you have a compatible Android hardware device, a compatible digital audio device, and need to record audio at 48 kHz for video compatibility, it is really an obvious choice to purchase USB Audio Recorder PRO for US$6.71 (or a similar amount in your region and currency) directly from the Google Play Store.