The single Maono AU-WM820 wireless microphone system costs under US$100 and sounds good for the price, despite a minor issue.

Here is my review of the AU-WM820 wireless system. The kit includes a transmitter, receiver, charging cables and a windscreen for the transmitter’s built-in microphone. The official retail kit also includes a plugin lavalier which did not arrive with the special review unit I received. I am impressed at the ease of setup, connectivity and general quality for under US$100. I also much appreciate that the Maono AU-WM820 indeed includes a windscreen for the transmitter’s built-in microphone. I find it very good for the price. However, there is one detail you should know about, as I’ll cover ahead. 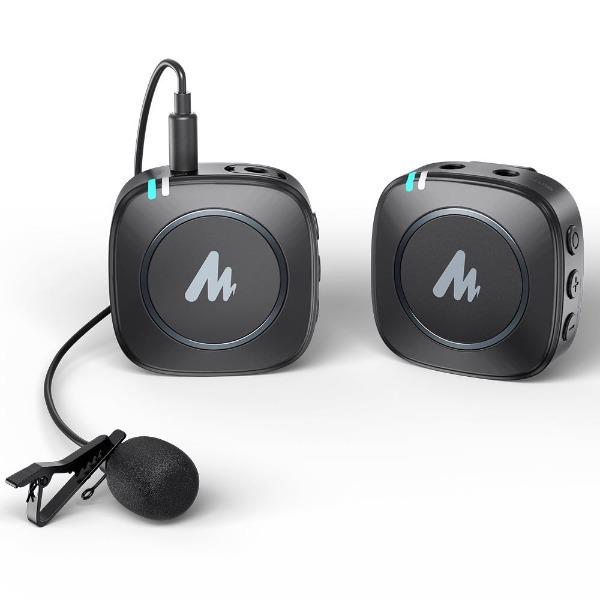 The transmitter in the Maono AU-WM820 kit has a 3.5 mm TRS input jack to use with the (normally) included omnidirectional lavalier, or any other that has that type of plug. 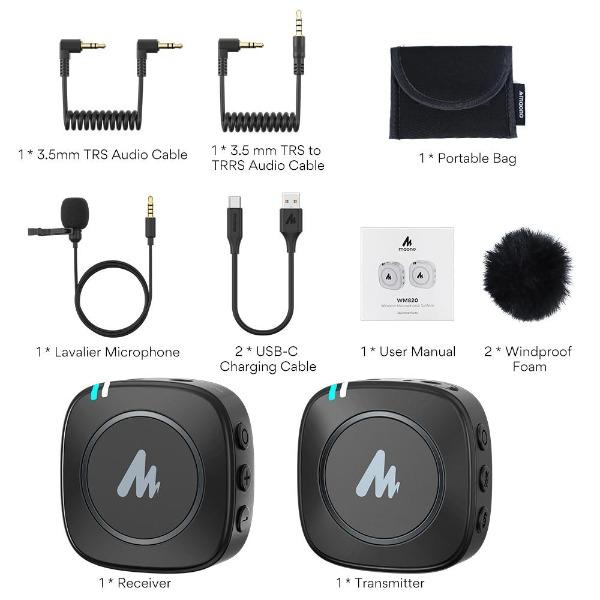 The receiver in the Maono AU-WM820 kit has a 3.5 mm TRS stereo jack to plugin your headphones, plus another 3.5 mm unbalanced TRS stereo jack to feed whatever device you would like, which will likely be a camera, camcorder, mixer, smartphone or tablet. The WXM22 kit includes two audio cables for that purpose:

See my 2015 article TS/TRS/TRRS/TRRRS: Combating the misconnection epidemic, illustrated above..

The Maono AU-WM820 kit uses the 2.4 GHz band. The kit I received was already paired.

There is an optional auto-pair mode, but I didn’t need to use it.

The battery inside the transmitter and receiver built-in li-po battery 350ma/3.7v. 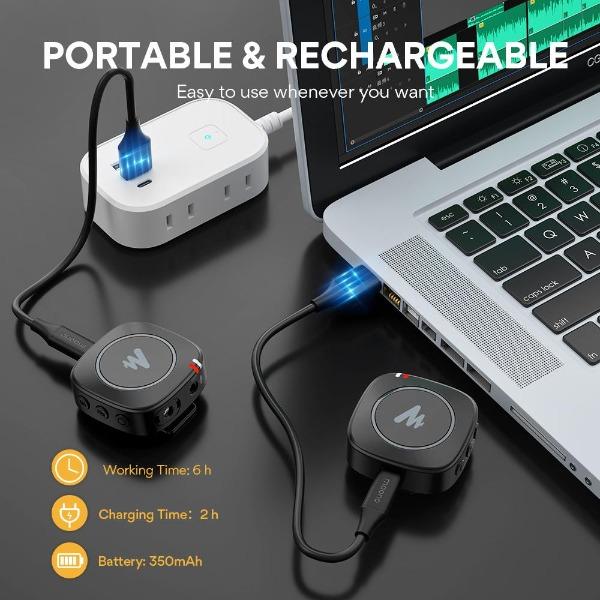 They are rechargeable via the USB-C port. (No charger is included—Just use one that you already have.) Maono rates the autonomy (working hours) as six hours.

Live monitoring but not latency free to a human perception

Unlike the last few wireless systems I have tested, I was surprised to notice latency (delay) when monitoring live through the 3.5 mm stereo jack on the received of the Maono AU-WM820 receiver. (With the other wireless systems I have tested this year, I did not perceive any latency.) Since I did not find that spec online or in the manual, I contacted Maono to find out what the rated latency is for this unit. The response was that it has: “about 20 ms or less”. (For those unfamiliar, audio latency/delay is typically measured in milliseconds or thousandth of a second). This rating of 20 ms in the Maono AU-WM820 is substantially more latency (delay) than —for example— the rated latency of the RØDE Wireless Go II, which is only between 3.5 to 4 ms. When I tested the US$299 RØDE Wireless Go II (reviewed here), the latency was imperceptible to me. However, I definitely noticed it with the Maono AU-WM820 which is why I checked about its rating. Of course, it should be noted that the AU-WM820 costs a third of the price and is a single channel system, while the US$299 RØDE Wireless Go II is dual channel system and includes built-in recording, so it is not fair to compare them.

Does this latency issue matter?

Certainly, the latency does not degrade the audio quality. As long as you (the sound person) are not speaking while monitoring (which would be quite unusual for a wireless system except for initial setup), it won’t bother you much to you hear 20 ms delay in your headphones from other voices, not your own voice.

What about audio/video lip sync?

Using this information as a guide, the Maono AU-WM820 20 ms official worst-case lag is close to the ±22ms maximum limit for film at 24 fps, but fortunately does not reach it or surpass. For video, the official Maono AU-WM820 audio lag compared to the video is well within the acceptable windows established by the ATSC and the ITU. For those producers who want to be even more accurate than the ATSC and ITU specs, Final Cut Pro can edit sub-frame audio down to 1/80th of a second and the Fairlight section of DaVinci Resolve can move audio by a single sample according to Charles Bennett. If you record audio at 48 kHz (see 48kHzAlliance.com) as you should, that’s forty eight thousand samples per second.

For these recordings, no filtering, compression or other effects were used. For this outdoor test, I first wanted to determine whether the signal would be strong enough at a half city block distance here in Coral Gables/Miami, Florida, US. The signal quality was fine at that distance, as long as Sandra did not face away from the camera. I also wanted to see how well the windscreen would handle the breeze, and I believe it worked well.

Half a block away:

Next, we did a recording at a much shorter distance of only about 14 meters (or about 46 feet) where she finally walks towards the camera while speaking.

Option to use an external mic of different types

As I explained previously, the Maono AU-WM820 transmitter has a TRS 3.5 mm input to plug in an external microphone. That can include a lavalier microphone with a TRS 3.5 mm (like the one normally included, but I did not receive it with my review unit), a shotgun mic terminating in TRS 3.5 mm that works with bias voltage (“plugin power”), a handheld condenser microphone that works with bias voltage (“plugin power”) and properly fitted for TRS 3.5 mm plug (i.e. the MXL MM130, with a TRS adapter)… 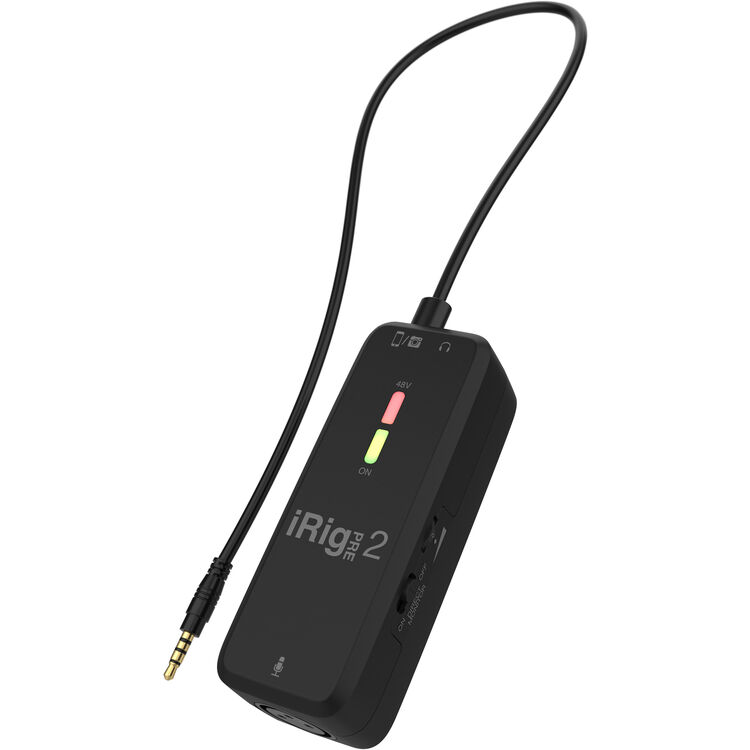 …or even a dynamic handheld microphone when used together with the iRig Pre 2 pre-preamp from IK Multimedia, since its TRRS plug automatically adjusts to behave like a TRS when appropriate, as I covered in the review. Of course, you would also need to use an XLR coupler as indicated below: 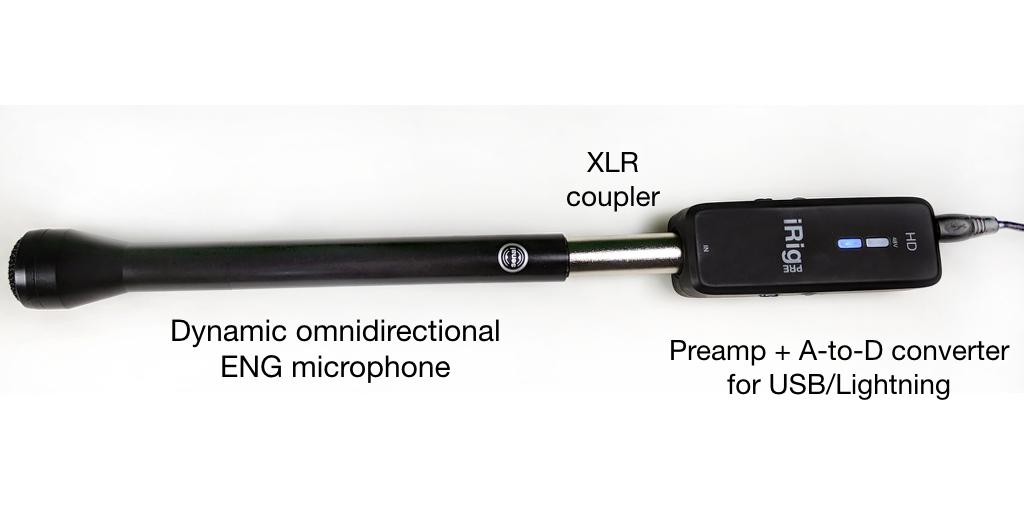 (In its price range)

Live monitoring from the receiver

The Maono AU-WM820 represents is a good value for under US$100. I am impressed with the appearance, compactness, build quality, connectivity, ease of setup and sound quality in its price range. The 20 ms latency issue is indeed noticable to the ear when recording but acceptable for lip sync as explained in the article, since it’s within allowable tolerances of the ATSC and the ITU. For more information, visit the Maono product page here.

Many of the photos of the AU-WM820 system are courtesy of Maono.

Some of the other manufacturers listed above have contracted Tépper and/or TecnoTur LLC to carry out consulting and/or translations/localizations/transcreations. Many of the manufacturers listed above have sent Allan Tépper review units and/or NFR software for review, including Maono. So far, none of the manufacturers listed above is/are sponsors of the TecnoTur, BeyondPodcasting, CapicúaFM or TuSaludSecreta programs, although they are welcome to do so, and some are, may be (or may have been) sponsors of ProVideo Coalition magazine. Some links to third parties listed in this article and/or on this web page may indirectly benefit TecnoTur LLC via affiliate programs. Allan Tépper’s opinions are his own. Allan Tépper is not liable for misuse or misunderstanding of information he shares.