Luxi For All (US$30) from Extrasensory Devices is a small, translucent white hemisphere with a spring clip. It’s designed to clamp over the front-facing camera of a smartphone, transforming it into an incident-reading light meter. 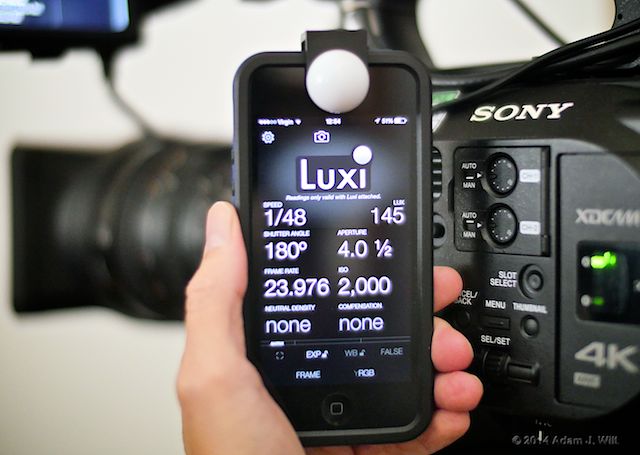 Luxi For All on an iPhone running Cine Meter II

The original Luxi models (US$30, previously reviewed) are designed specifically for the iPhone 4/4S and iPhone 5/5S: they’re form-fitting caps that precisely position their photosphere over the iPhone’s camera. They work very well – but by their nature, they only fit their target iPhones (with a bit of padding, Luxi for iPhone 5/5S also works on the thinner iPod touches 4G and 5G), and they cannot be used with cases or bumpers.

Luxi For All avoids form-factor lock-in; its universal design fits any smartphone or tablet, with or without a case, so long as the device is no thicker than 0.4” / 1cm, and the camera is no further than 0.6” / 15mm of the device’s edge.

Luxi for iPhone 5 (left) and Luxi For All (right)

The molded frame has a stiff spring at its base, which holds the hinged clip firmly against the back of the device. 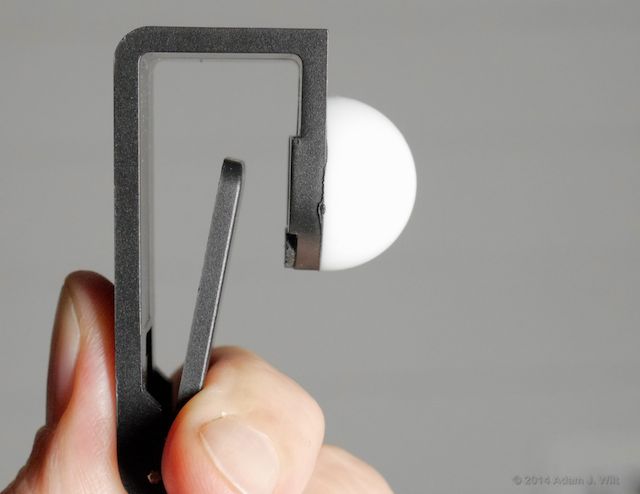 The frame has an aperture for the camera, over which the translucent white dome is attached. The aperture has a slight ridge on both sides and a textured anti-slip rubber pad at the bottom. 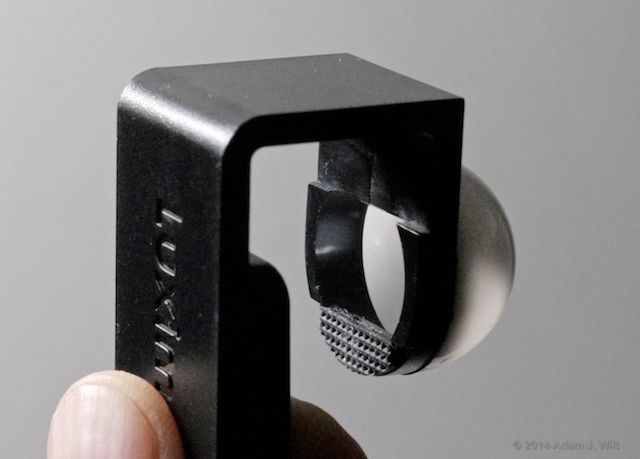 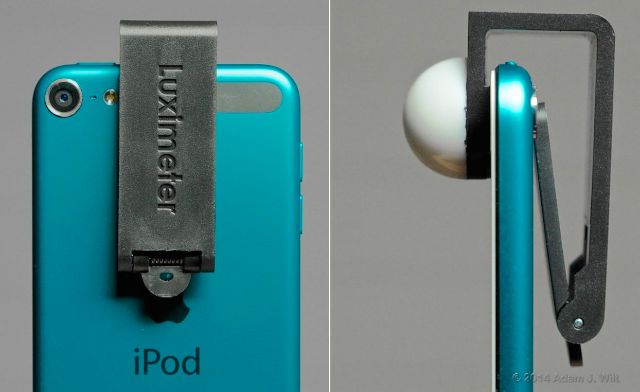 Luxi For All clipped to an iPod touch 5G 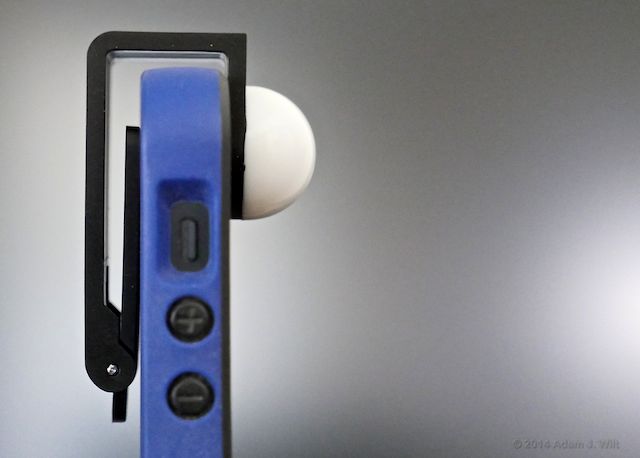 Luxi For All on an iPhone 5 with a thick case 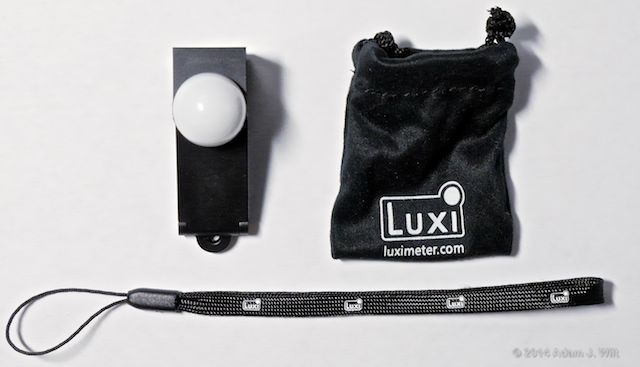 What you get for $30: Luxi For All, a carrying bag, and a wrist strap

How To Use It

Simply clip Luxi For All atop the front camera of your iOS or Android device, fire up a Luxi-aware light-metering app, and start taking incident readings (actually, any light-metering app will work, as long as you can fit Luxi over the camera it uses. Just be aware that you’ll need to calibrate the app separately for use with Luxi, as the incident and reflected readings using a given camera differ by more than a stop).

There are three iOS metering apps I know of that explicitly support Luxi: ESDevice’s own Luxi (free), Pocket Light Meter (free; in-app purchases to remove ads and/or buy the developer a beer!), and Cine Meter II (US$20. Disclosure: I wrote Cine Meter II, and I profit from its sales). 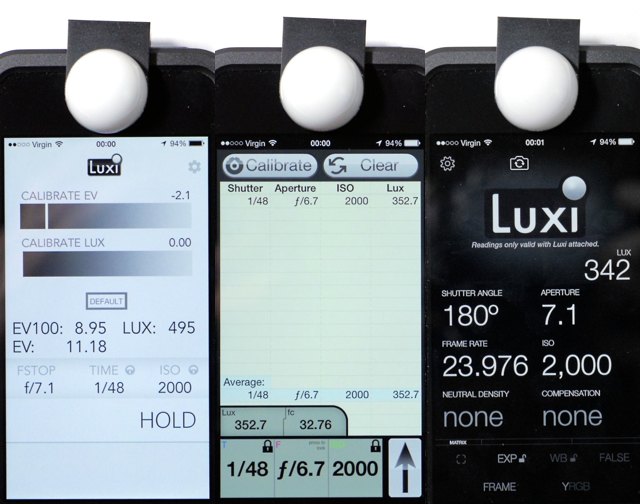 On Android, ESDevices’ Luxi (free) offers the same functionality as on iOS, though (as is often the case) compatibility with a specific ‘droid can be iffy: my two-year-old Samsung Galaxy SII (a.k.a. Epic 4G Touch) shows only the top half of the UI, so I could calibrate the app but not use it. The ‘droid Luxi app is only a couple of weeks old; ESDevices will likely be hacking on it to resolve screen-formatting issues for quite some time to come.

Whichever app you choose, you’ll need to calibrate it: iDevice cameras differ in their reported sensitivities, even cameras in two of the same model iDevice. Luxi and Pocket Light Meter have separate calibrations for exposure values and lux/fc readings; Cine Meter II has a single calibration for both. Use a separate, known-accurate light meter for reference: I used my Spectra Pro IV-A and Gossen Starlite, which agree with each other within 1/10 stop, for testing purposes.

Side notes: • I wasn’t able to calibrate the lux readings in the Luxi app with Luxi For All on my iPhone 5, as the camera was just a bit too sensitive for the calibration control’s range. When I moved the Luxi For All to my iPod touches or my Samsung, I was able to  get a good calibration.

• Lux and foot-candles are linear measurements of light. 1/10 stop of exposure or calibration difference is about an 8% change in lux or fc readings. Practically speaking, Pocket Light Meter’s 352.7 and Cine Meter II’s 342 lux are very close to the 362 lux reported by the Spectra Pro IV.

• Pocket Light Meter shows f/6.7 compared to the f/7.1 on the other two apps. That 1/3 stop difference is due to sloppy calibration on my part.

• Both Luxi on iOS and Pocket Light Meter auto-detect Luxi and Luxi For All, apparently based on overall image contrast. When I expose ‘em to strong side light or top light, they sometimes flip into their “attach luxi” screens, even with Luxi attached. Luxi on Android appears to use the device’s proximity sensor to detect when Luxi For All is attached, so will work best on devices where the sensor – ironically, a light meter in its own right – is positioned where the Luxi For All’s frame will cover it.

Luxi For All’s photosphere passes a bit more light than the original Luxi’s photosphere does; either the material is a bit thinner or it’s a bit less opaque and diffusing. This has two effects. 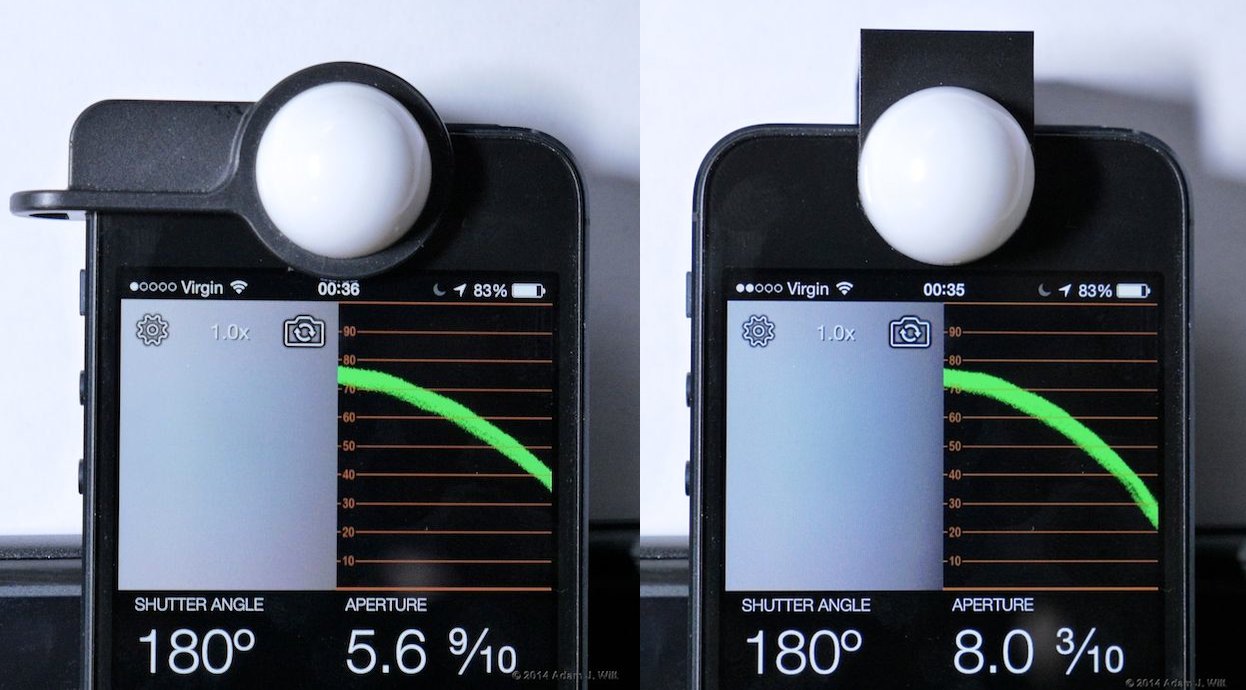 Luxi for iPhone 5 and Luxi For All, with the same lighting

First, Luxi For All gives readings that are, on average, half a stop faster than the original Luxi does. This means that you need to recalibrate your metering app if you switch from Luxi to Luxi For All or vice versa. It also means you can get accurate readings in slightly darker conditions with Luxi For All.

(This half-stop increase in transmittance likely explains why the Luxi app’s lux reading couldn’t be calibrated on my iPhone 5: it was written for the original Luxi, and the brighter Luxi For All combined with my iPhone’s reported sensitivity combined to exceed the calibration range of the app. I expect ESDevices will expand the app’s calibration range in a future update.)

Second, as the waveform display shows above, Luxi For All’s “thinner” dome diffuses light less evenly than Luxi’s does. I find it makes Luxi For All about 1/2 – 2/3 stop more sensitive to off-axis light than Luxi, and Luxi For All better matches my other meters with off-axis sources, staying within 1/2 stop of the Spectra Pro and Starlite at all angles, while the original Luxi can be up to a stop less sensitive when the light is coming from 90º off-axis (these results are for an iPhone 5 front camera; different iDevices with slightly different angles of view may show different angular sensitivity variations.)

Accurate positioning of Luxi For All is critical to getting consistent, repeatable results. The original Luxi’s design put the photosphere directly over the camera, but Luxi For All’s design makes that your responsibility.  Here’s a comparison of readings with quartering light, with Luxi For All positioned to the left and right of the camera (as far as it can go without having the edge of the aperture creeping into frame) compared to having it centered, shot with Cine Meter II in front-camera mode so I can show you what the iPhone’s camera sees):

Light readings (and what the camera sees) with Luxi For All to the left, centered, and to the right

Unfortunately, iDevices and most ‘droids are slippery beasties, with glass fronts and smooth backs, so it’s easy for Luxi For All to drift around during use. I recommend securing it with a bit of gaffer tape across the back side of the clip once you’ve got it positioned properly – somewhat inelegant, perhaps, but it reduces the amount of obsessive-compulsive repositioning otherwise needed, and reduces the chance of erroneous readings from photosphere slippage. Besides, it gives your device good “set cred”, as any proper piece of cine equipment has gaffer or camera tape all over it.

If you get Luxi For All properly positioned, its readings should be as good as the camera and metering app on your device allow. I found that Luxi For All on my iPhone 5 tracked my “real” incident meters, from just under 0.5 lux to as bright a light as I could find and tolerate, within ±1/10 stop for head-on light and with no more than -1/2 stop deviation for off-axis sources.

You currently have three options for incident light metering on iOS and ‘droid devices:

Which one to get? There’s no clear winner.

The original Luxi is the most convenient, if you have a compatible device and it’s not ensconced in a case. It isn’t as accurate as the others for off-axis sources, and while it self-aligns very nicely, you still need to make sure you repeatedly push it into place or tape it down, as it slides around on glassy iDevices and can fall off if you’re not paying attention.

Lumu’s tilt-and-swivel adjustability is very useful (just like the rotating heads on “real” incident meters), and it’s securely retained by the headphone socket, but it won’t work with thicker cases like the Nugard KX I have on my iPhone 5, and remembering to trim it for the prevailing lighting color can be a bit of a bother.

Luxi For All clips onto anything I’ve thrown it at, including my primitive ‘droid in its Otterbox and an iPad 3 with a padded, faux-leather tilt-stand case, but having to carefully align it every time is tedious, yet necessary.

(I know, I know: first-world problems! Still, when you’re busy setting up lights and trying to wrangle a camera, anything that slows you down is unwelcome.)

None are as ergonomic as a “real” meter with knobs, buttons, and dials… but the best light meter is the one you have with you, and if you already have an iDevice or ‘droid, adding any of these attachments lets you take incident readings with essentially the same accuracy as a “real” meter. At $30, Luxi For All is the most affordable way to add incident reading capability to a wide variety of iOS and Android devices.

Disclosure: I put $28.00 into the original Luxi Kickstarter project and got two Luxis as a result; I put $19 into the Luxi For All Kickstarter project and got a Luxi For All. The Lumu folks sent me a Lumu for development purposes. I support the Luxis and the Lumu in my Cine Meter II app, but my app isn't dependent on either one to work. Jarrod at Extrasensory Devices kindly let me debug a 64-bit Cine Meter issue on his shiny new iPhone 6… but then I bought him lunch in repayment. Aside from that, there is no material connection between me and Extrasensory Devices, Lumu, or NuWaste Studios (the Pocket Light Meter folks), and no one has offered me any compensation or other blandishments for a review, positive or otherwise.