The Logitech K400 Spanish ISO version is ideal for writers, editors, and TriCaster operators, even if they only type in English.

The Logitech K400 is a combo wireless keyboard/trackpad with excellent build quality. The K400 competes well with Apple’s wireless keyboard, and does even more, at a fraction of the price. It’s well suited for editors, writers, and TriCaster operators. Compatibility of the K400 includes Boxee Box, ChromeOS, HTPC (Home Theater PC), Mac, Windows, and even NewTek TriCaster models. Ahead you’ll learn why I like the K400 more than the equivalent Apple pair of products, and why I had to go to the extreme of importing the superior Spanish ISO version from Europe —via a third party— since Logitech not only forbids its sale in the US currently, it even forbids Amazon.es (Spain) from shipping it to this country. 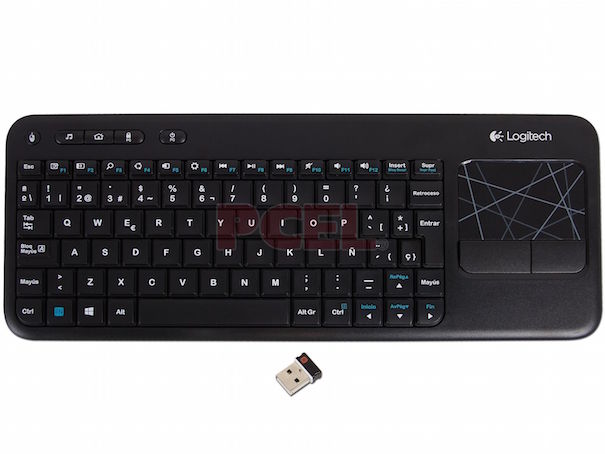 The Logitech K400 is a combo wireless keyboard/trackpad with excellent build quality. The K400 competes well with Apple’s wireless keyboard, and does even more, at a fraction of the price. It’s well suited for editors, writers, and TriCaster operators. Compatibility of the K400 includes Boxee Box, ChromeOS, HTPC (Home Theater PC), Mac, Windows, and even NewTek TriCaster models. Ahead you’ll learn why I like the K400 more than the equivalent Apple pair of products, and why I had to go to the extreme of importing the superior Spanish ISO version from Europe —via a third party— since Logitech not only forbids its sale in the US currently, it even forbids Amazon.es (Spain) from shipping it to this country.

In this article, you’ll learn:

The K400 is wireless, but it’s not Bluetooth. Instead, it includes its own tiny USB device called a Unifying Receiver, as well as AA batteries. 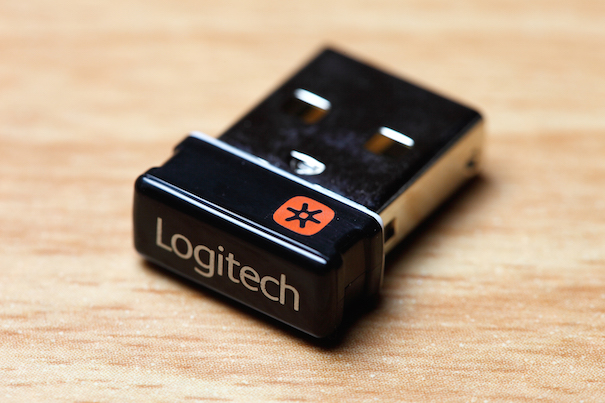 The Logitech Unifying receiver is a tiny dedicated USB wireless transceiver which permits up to 6 devices such as mice and keyboards, which must be made by Logitech and of compatible design, to be linked to the same computer using the 2.4 GHz band. Photo courtesy of Flickr user: MiNe (sfmine79).

Because the K400 is not Bluetooth, it’s immediately compatible with devices that don’t include any Bluetooth capability. 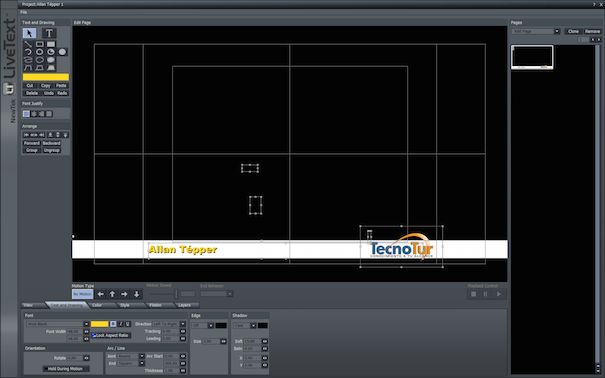 Those include many NewTek TriCaster models, like the TriCaster 410 I used to write this article: Why your character generator is your brand (illustrated above), as well as older Apple Mac Pro towers that shipped standard without Bluetooth or WiFi. (Bluetooth and WiFi were optional for many Mac Pro towers if built to order.)

Although Logitech offers drivers for Chrome OS, Windows XP, Windows Vista, Windows 7, Windows 8, and Windows RT, fortunately it is not necessary to install any driver for basic operation. That’s why it can work perfectly for Apple Mac computers and NewTek TriCaster models without installing any special driver. On a Mac, there are just couple of optional details to adjust if you really want to, but I found it completely unnecessary and left it alone. I am also very enticed by the idea of using the K400 with any of the upcoming computers-on-an-HDMI-stick, like the ASUS Chromebit , which has a USB port and should be available for less than US$100 later in 2015. Plug the ASUS Chromebit into your favorite HDMI monitor, plug the Logitech Unifying transceiver that comes with K400, and you’re computing! 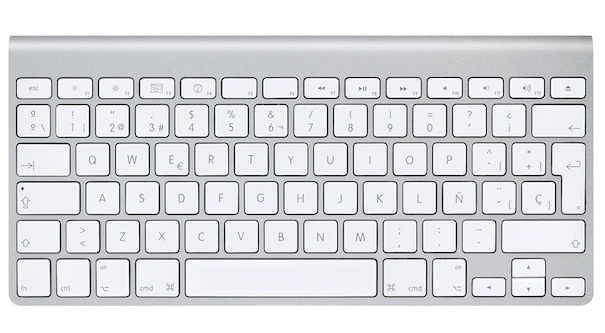 Apple wants to direct us to their Magic Trackpad for an additional US$69. Now you have two separate pieces, which comes to a subtotal of US$138, but we’re not done yet if we want it to be a single unit. To achieve that,

we need a device like a Twelve South MagicWand for another US$29.95 to join the Magic Trackpad to the Apple Wireless Keyboard and create a single device. Our subtotal now reaches US$167.95 before tax and measures over 41 centimeters (over 16 inches) wide. On the other hand, the wonderful Logitech K400 measures under 36 centimeters (under 14″) wide and costs under US$25 (in the US for the US version) or under €25 (in Spain for the Spanish ISO version). The build quality of the K400 is wonderful.

Even considering Logitech’s strange policy of not offering the Spanish ISO version of the K400 in the United States (where the second language of the country is Castilian (See The Castilian Conspiracy or La conspiración del castellano), and the multiple benefits of using a Spanish ISO keyboard even if you only type in English (as explained in the next section), even if you have to pay an extra US$50 for shipping via a friend who lives in Spain as I did, the total comes to US$78 which is less than half of the US$167.95 before tax for the “Frankenstein” you’d need the two Apple products plus the Twelve South MagicWand to join them. The Logitech K400 is a better product, at a fraction of the price.

How to configure your TriCaster or Windows 7 — Hey Ma, no drivers!

Here I’ll show you how to configure a TriCaster for the K400 Logitech with Spanish ISO layout, without changing the language of the system —or the TriCaster— from what you currently have. (In the steps below, I’m supposing that what you currently have is English/United States. Otherwise, substitute your current language for English/United States.) Note that a subset of this would also work for Windows 7, without a TriCaster.

After adding the Spanish layout (not language) as indicated above, at the top of the dialog, change the default input language to English (United States)-Spanish, click Apply, then select US under Keyboard and click Remove. Then click Apply again, followed by Ok and then Ok again in the Region and Language dialog. Then go back to TriCaster.

I imagine that you prohibit the sale of the Spanish version of the K400 (and other Logitech keyboards with the Spanish ISO layout) in the United States in order to avoid grey marketing. In this case, you are taking your grey marketing prevention way too far, considering that Castilian is the second language in the US, and there are so many advantages to using a Spanish ISO keyboard (not a Latin American keyboard) even for those who mainly or entirely write in English, as indicated earlier in this article. I recommend that you get over the grey market prevention to serve the huge US market that would purchase a keyboard with the Spanish ISO layout.

If you are so concerned about grey marketing, you could create a US Hispanic version, with all of the keys just as in the Spanish ISO version, but labeling the box as US Hispanic.

Why to favor the Spanish ISO layout worldwide, and avoid the Latin American one like the plague

The following explanation has only to do with irrefutable advantages, and has nothing to do with patriotism. In fact, full disclosure, I am not a Spaniard (even though Leo Laporte once innocently thought I was and stated it on his TWiT programs when he paraphrased me about advantages in WhatsApp as opposed to SMS when writing in Castilian). I was born and raised in the United States.

While the Spanish ISO layout is perfect for all of the reasons covered earlier in this article, the Latin American layout has many disadvantages:

Conclusions about the Logitech K400

I love the Logitech K400 for all of the applications mentioned, and for me, it makes much more sense than the “Frankenstein” of three devices covered earlier, let alone the lower price. Even with the unreasonable requirement to import it from Spain, it still costs less than half of purchasing the three ingredients necessary when using the Apple Wireless Keyboard and Magic Trackpad. If you live in the US and disagree about the multiple advantages of the Spanish ISO version, you can still buy the US version. I hope that Logitech will see the light soon and offer the Spanish ISO version in the United States.