Real-world footage and use

The new Super35 6K Pocket Cinema Camera from Blackmagic was delivered into a few lucky people’s hands last week, and my friends at Stray Angel Films were one of them. They gave me a week with it, shooting some stuff for my artist friend Chase Lock surrounding his new gallery at Olympia Club in Santa Monica, and I’ve put together a sort of review/overview for your edutainment. I haven’t used the Pocket 4K before, so these are wholly “first impressions” with minimal comparison as the cameras are functionally identical anyway. There’s a shared user manual you can check out here, and you can see the footage in the video embedded at the end of this writeup. 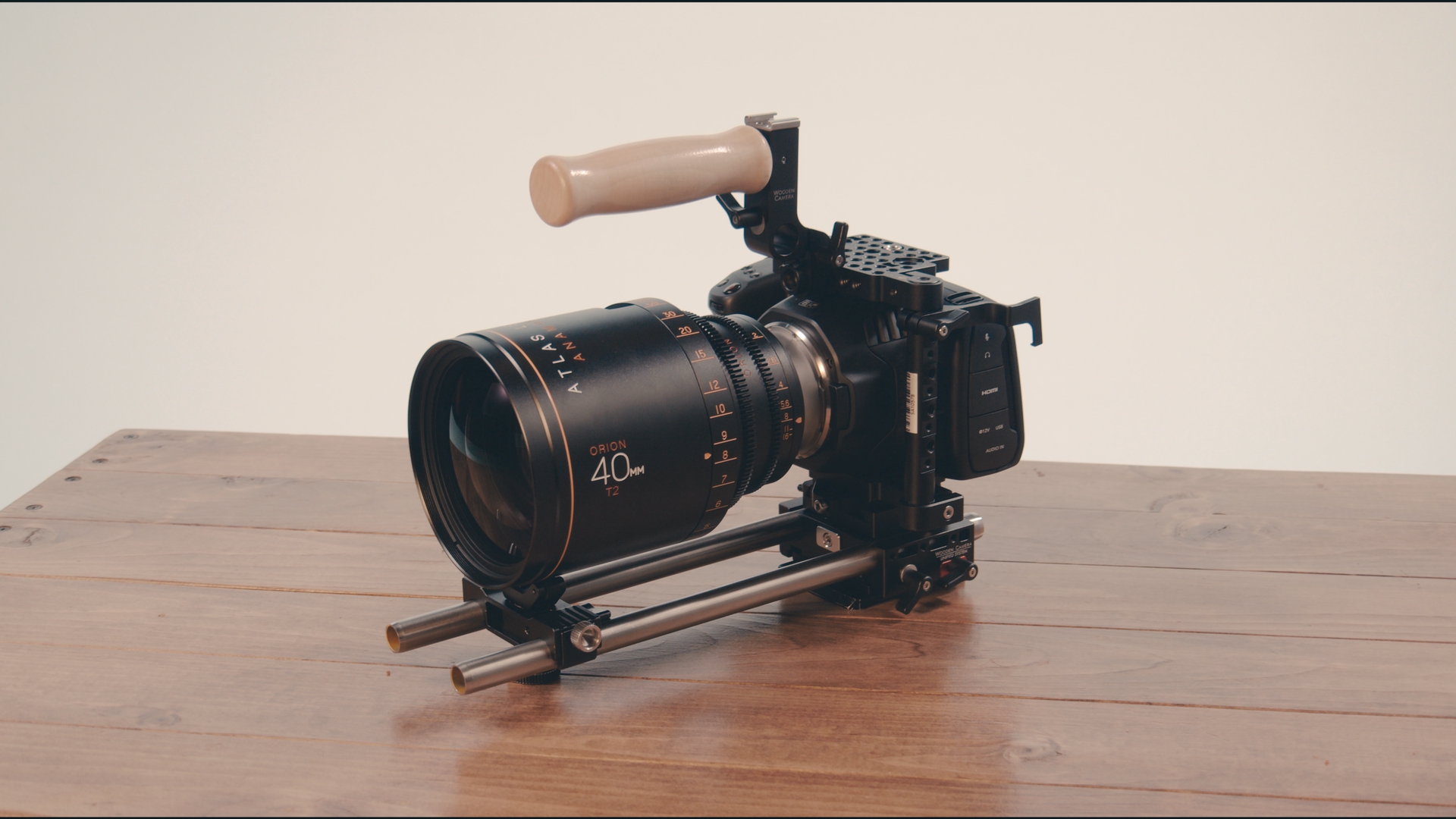 To start, the camera is quite easy to use. The button layout and menu all are quite intuitive and I never found myself “searching” for features. At times the touch screen on the back could be “too simple”, where I’d out-think myself (“Where’d that go again? Oh there’s another page!”) but once that happens the first time you don’t forget. While recording (or not) you can change ISO, White Balance, Shutter Speed, F-Stop, trigger the one-shot AF and AE, or even take a 21mp DNG still image. There are redundancies, so if you’re more of a touch screen person than a button-pusher, you’ve largely got those options. There’s also a “Slate” feature you can access by swiping left or right on the touchscreen where you’ve got lens and filter data, Reel/Scene/Take, a “good take” toggle, shot type, Int/Ext and Day/Night toggles. There’s also an overall “Project” metadata section where you can put in Project Name, Director, Cam Op, and Camera Designation (A, B, etc). That was fun to find.

When I pulled the camera out of the box, it was already set at 6K BRAW, 8:1 compression, 24fps, 180 shutter, and 400ISO. Exactly where I was going to put it. I quickly threw a 256GB CFast card in there, my Sigma 18-35mm, and was ready to roll. A nice feature I noticed with the Pocket 6K was a sort of “dummy proofing” of the Card Format feature, where you have to hold a button down for a 3-second countdown. Said feature is easy to find, simply by tapping the UI where it shows your card/time remaining. You can format to exFAT or OSX Extended, depending on how you roll, and can use either a CFast card or SD card. If you go the SD route, you’ll want to make sure it’s as fast as you can afford or else the camera might not be able to write to it depending on the size/speed of your footage. The safe bet is to stick with CFast or get a USB-C SSD to record to (which honestly might be cheaper). The Samsung T5 is a popular choice but I believe most drives will work, such as my beloved GDrive Mobile SSD. 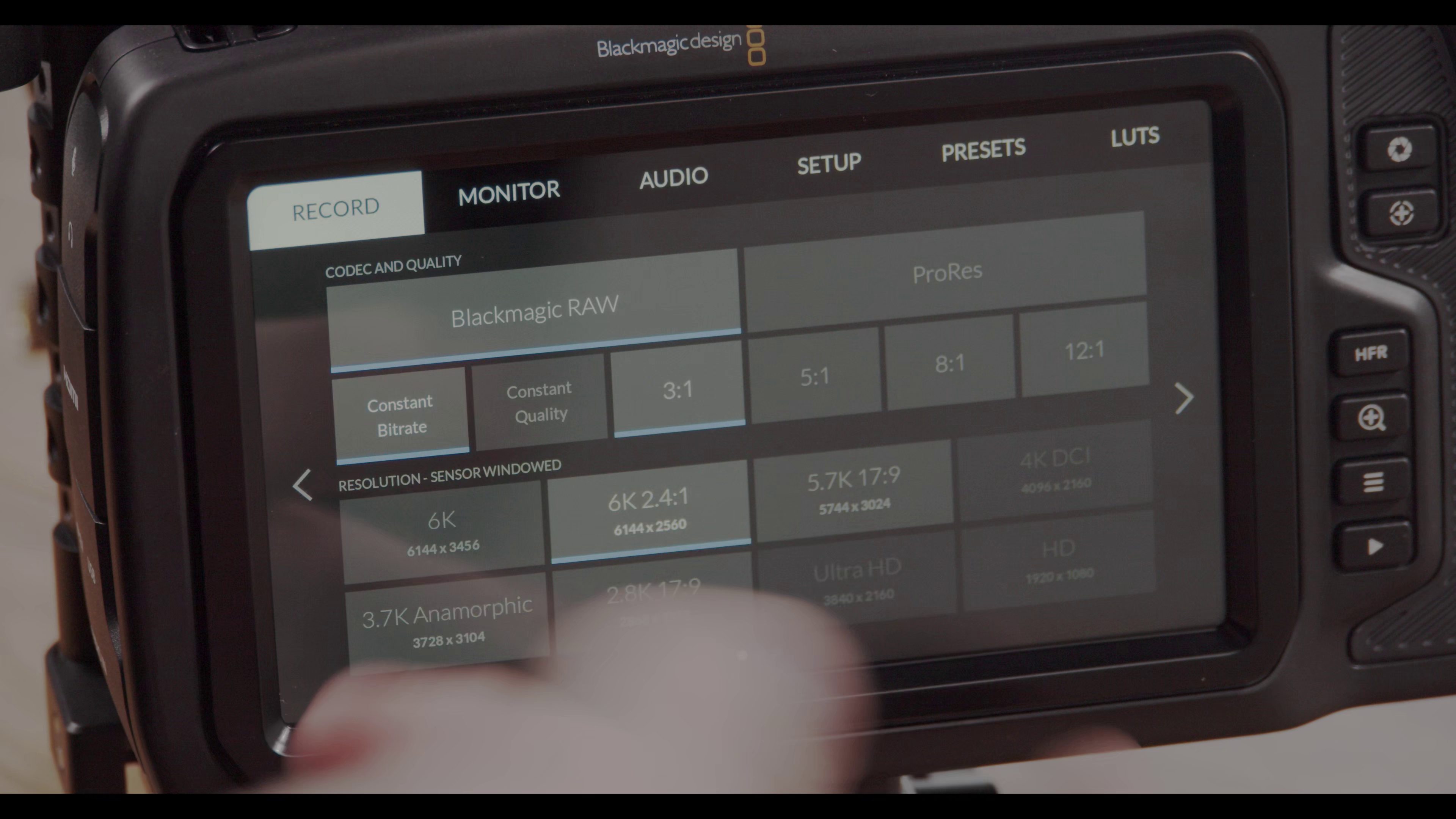 You can record to BRAW or ProRes, but some formats are restricted to one or the other. Essentially if you’re shooting in the 6K neighborhood you’re in BRAW, if you’re shooting 4K or under you’re in ProRes land. From my experimentation, the file sizes are basically the same so you might as well shoot BRAW. Surprisingly, my PC had absolutely zero issues editing the 6K raw files. Not a single glitch, hiccup, or freeze. However, you do have to edit said raw files in Resolve (which you get for free when you buy a Blackmagic camera). It is possible to edit in Premiere but that requires a third-party, pay-for plugin. Which sucks. Depending on your situation, ProRes might be the move. For some of my Filmtools reviews, I just shot 4K ProRes because I a) wanted to edit in Premiere and b) didn’t need to be doing any color corrections that raw would help out with.

In regards to coloring the BRAW files, I found them incredibly easy to edit and very flexible. There’s a surprising amount of data in those raw files, enough to where technically I just had to make sure the histogram wasn’t pinned in either direction and I was good to go. The sky never blew out and the shadows never went black. Even at night, I was shocked at how well the camera handled (which I’ll get to in a moment).

Working with the camera, I just had a simple half-cage with a top-handle, complete with 15mm rod support, and was using the Steadicam AIR for support (which will be reviewed in a later article). I didn’t find myself wanting for anything else for the most part, but an external monitor or eyepiece would have been nice as the screen on the back is highly reflective and you can’t reposition it, which can cause issues when you’re trying to check focus or frame up your shot if you’re not directly behind the camera. Pulling focus was easy enough with my hand but if I was in a more professional shooting situation I would have hooked up my MicroRemote follow focus. 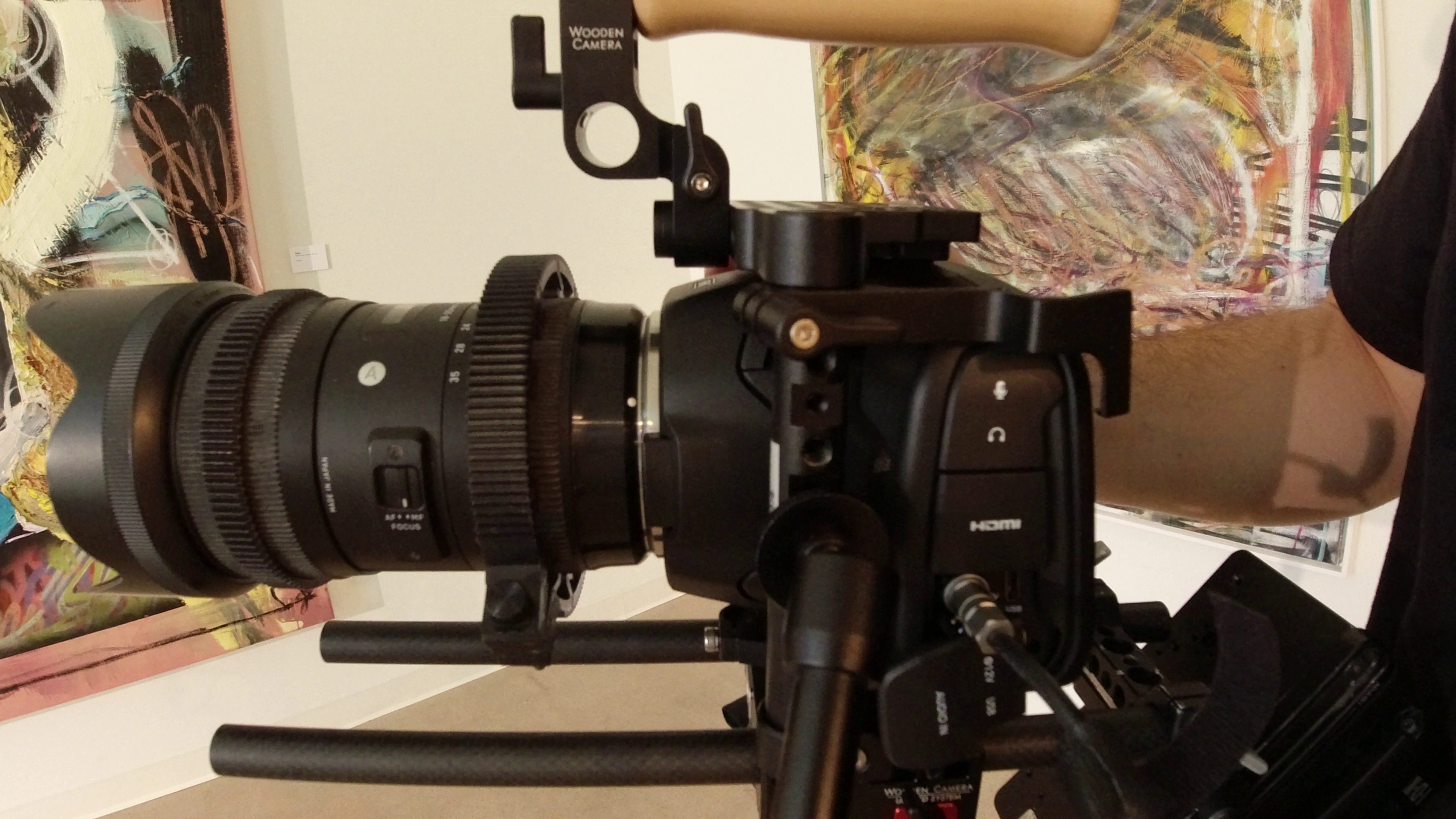 In regards to the rails, I was using them to hold on to and get some gentle purchase on the focus ring while moving and for holding the battery plate hidden back there.

While I was shooting I didn’t find myself asking any “dumb questions” like “where is Feature X” or “how do you…” which I believe speaks to the intuitive nature of the touchscreen. However I did find myself asking “why does the AF suck so much!?” I would hit the AF button, and the hunt would begin. And then it would catch focus aaannnddd lose it again. And then give up. The camera doesn’t have too many downsides that I could find, but the Autofocus is truly abysmal. Oh well. Auto Exposure seemed to do its job but I didn’t use it.

While I opted to use a cinema battery -DTap to 12v- which lasted me all day, I did run a test to see if the reported poor battery life of the Pocket 4K had carried over. It has.

I turned on the camera and started recording to a freshly formatted 256GB CFast card and got the promised 43minutes of 8:1 raw stuffed in there before the camera died 7 minutes later. Assuming you’ll have the camera on but not running for longer than that, I highly recommend either investing in tons of LP-E6 batteries or simply getting a nice big 150w cinema battery with a DTap port. I had mine on a plate which was attached to the camera (giving it a bit of extra heft, which was a nice addition to the resulting footage) but you could easily chuck it in a backpack or side bag or something if you wanted. Go crazy.

Another issue that will require a proverbial tissue is the lack of an IR cut filter in the body. While testing the Atlas Orion EF Anamorphics, we noticed a horrendous amount of IR interference when using our ND 1.8. To show how this is unique to the 6K (and all Blackmagic cameras not named “Ursa Mini Pro”), we made a video running through a few strengths of ND/IRND/WSNDs on the Pocket 6K, Arri Amira, and C100mkII. The aforementioned tissue you’ll need to get is either an IRND of some kind (different ones perform better or worse, that’s a test for a different day) or a dedicated IR cut filter that you’ll combine with whatever ND you’re using. 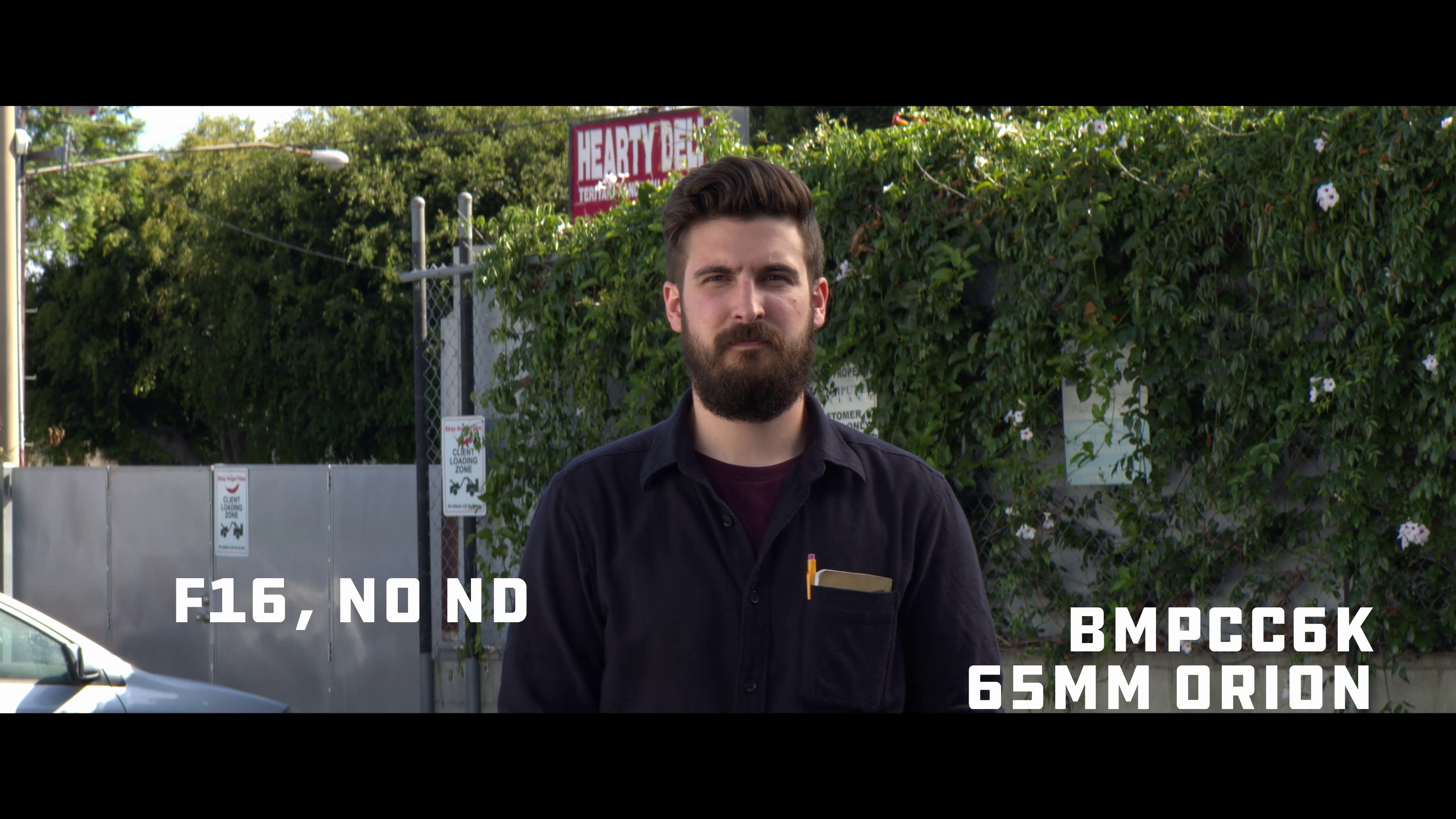 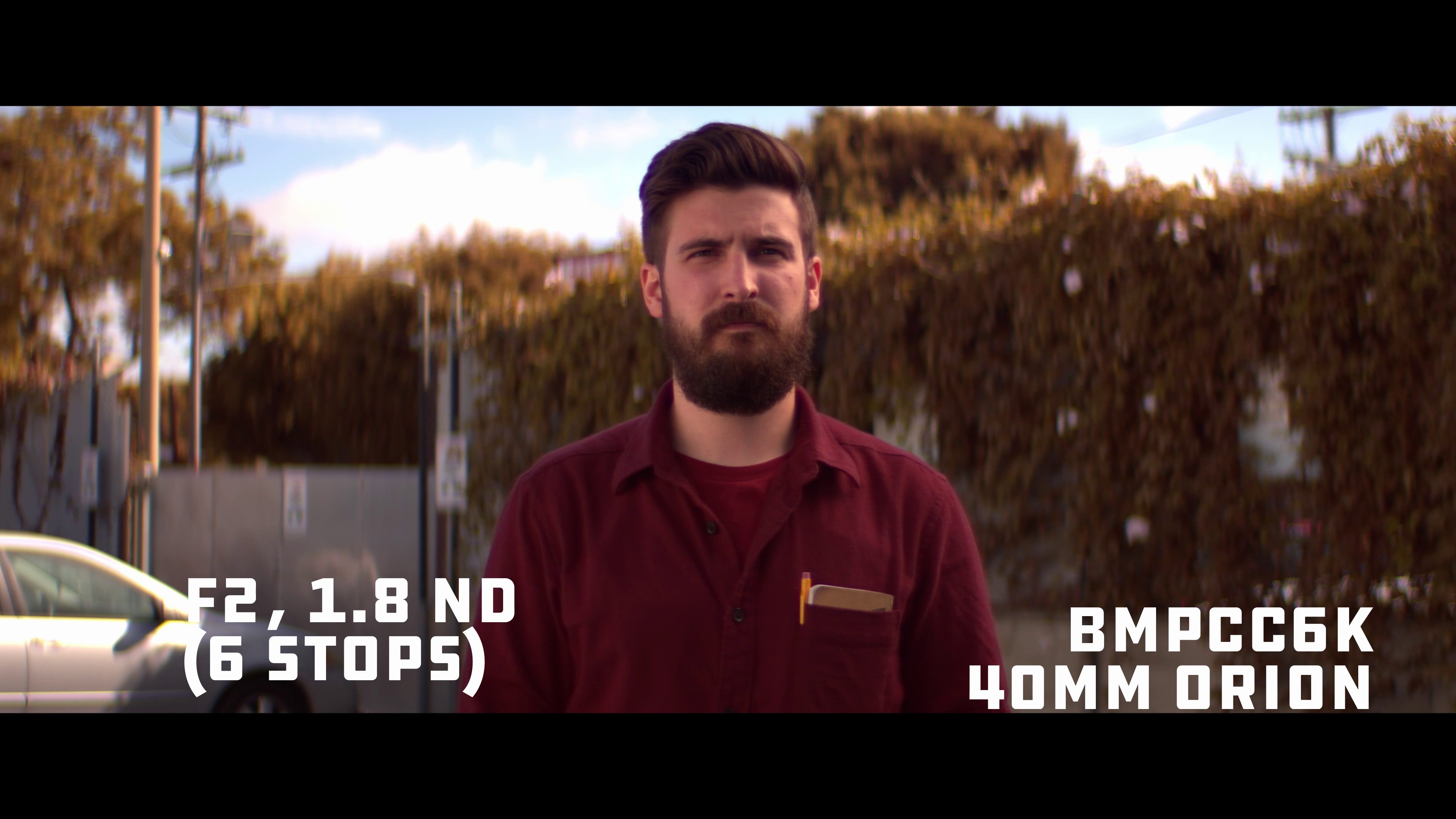 Aside from the infrared pollution (or perhaps including it) I found the images and colors I got from the Pocket 6K to be very pleasing, although perhaps not entirely “accurate”. I say this with as little emphasis as possible as I didn’t find it to be “bad” at all and rather enjoy the “stock” look of the Pocket 6K, but you may need to do a bit of color correction if you hit a situation where color accuracy is paramount, in my case the paintings I was filming. Creatively (insofar as the video is concerned) it didn’t necessarily matter, but the artist noticed immediately and his point of “it should look like the paintings look” outweighed my counter-point of “but it’s pretty already!” Lesson learned. It’s also just a matter of making sure you take care to color your images, I was rushing. In regards to other imaging issues, I did notice a touch of rolling shutter when panning around quickly, but nothing to write home about. There can also be a bit of moire in certain situations that a OLPF might take care of, but I didn’t notice it often. The one time I’m thinking of was on a canvas that was side-lit.

The really impressive feature of the 6K was the low-light performance. Something everyone begs for but rarely is delivered on. At night we went into Downtown Los Angeles and filmed some extra stuff for the promo, and at 3200 ISO I was astounded at how clean and legible the picture was. There’s some noise, but honestly, it’s not fixed pattern (so it looks “filmic”) and if you’re not looking for it you really don’t see it. The camera apparently goes up to 25,000 ISO but I didn’t find the need to go above 3200. Perhaps if I was filming in ProRes, but in raw I had plenty of information. 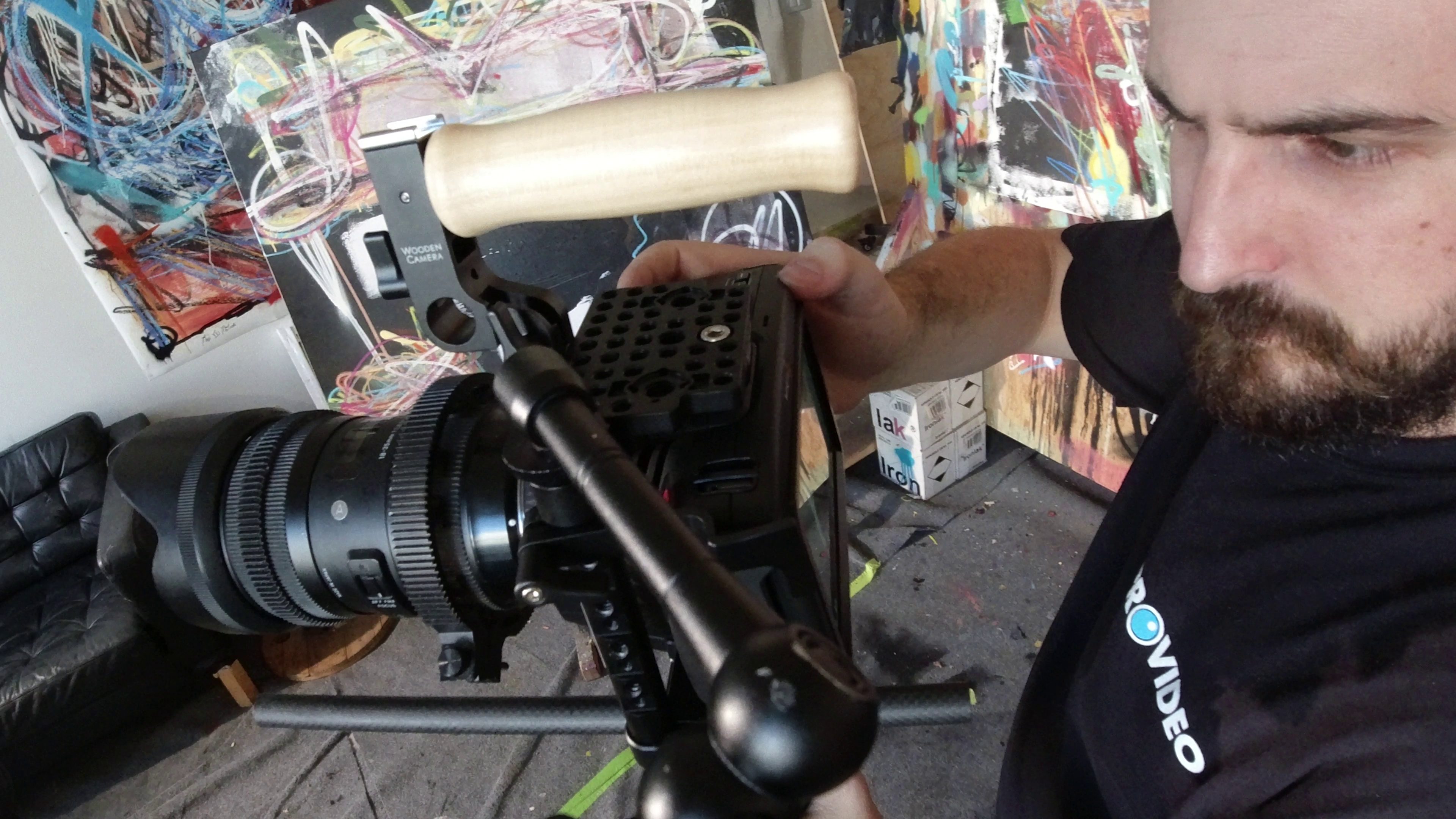 The main thing here that I think people should key in to is that this camera isn’t wholly better than the 4K, but it is a direct upgrade. The Super35 sensor is essentially a film industry standard, where M43 is not, and the EF mount is just as ubiquitous. Using a Speedbooster may get you an extra stop of exposure, but I can’t say this camera needs it and that means you’ve invested in EF glass anyway. Plus you’re putting more glass between your lens and your sensor, which could potentially degrade your image depending on the quality of it. By going for the S35/EF standard, Blackmagic has brought the Pocket Cinema line into a weird place where it’s not really a “cinema” camera per se, but it sure smells like one. As an example, there are very few budget cameras out there that have an Anamorphic mode. The 6K does. With the aforementioned Atlas Orion lenses, you’ve got a very attractive package for very little relative cost if you’re looking to shoot your next project Anamorphic. At $8,000 per lens, the Orions are vastly cheaper than their brethren and can also be re-mounted to fit PL or even E/M43 (even though your camera probably wouldn’t have a 4:3 mode to use it with). That being said, if you already own a Pocket 4K I don’t know if you need to rush out and upgrade right now. The 4K is still a fantastic little camera. However, if you’re in the market for either/or, there’s no contest just get the 6K.

If you just wanted to go the usual route of spherical lenses, and want to know the general cost of ownership (which is essentially the same as the 4K), I calculated it out to be around $4500:

So while the Pocket 6K isn’t necessarily a full-fledged cinema camera in regards to its chances on a backlot, and it has a few rough spots, it does create a really impressive image that rivals cameras 10 times its cost. I’m inclined to do some tests and see how it handles against the main contenders and where it falls apart.