A serious competitor to the likes of the ARRI Skypanel and Litepanels Gemini fixtures, the Aputure P300c is punching well above its weight.

Aputure has just relased one of their more exciting fixtures in a while in the form of their new Nova P300c LED Panel, aimed at taking on the likes of the Skypanel. 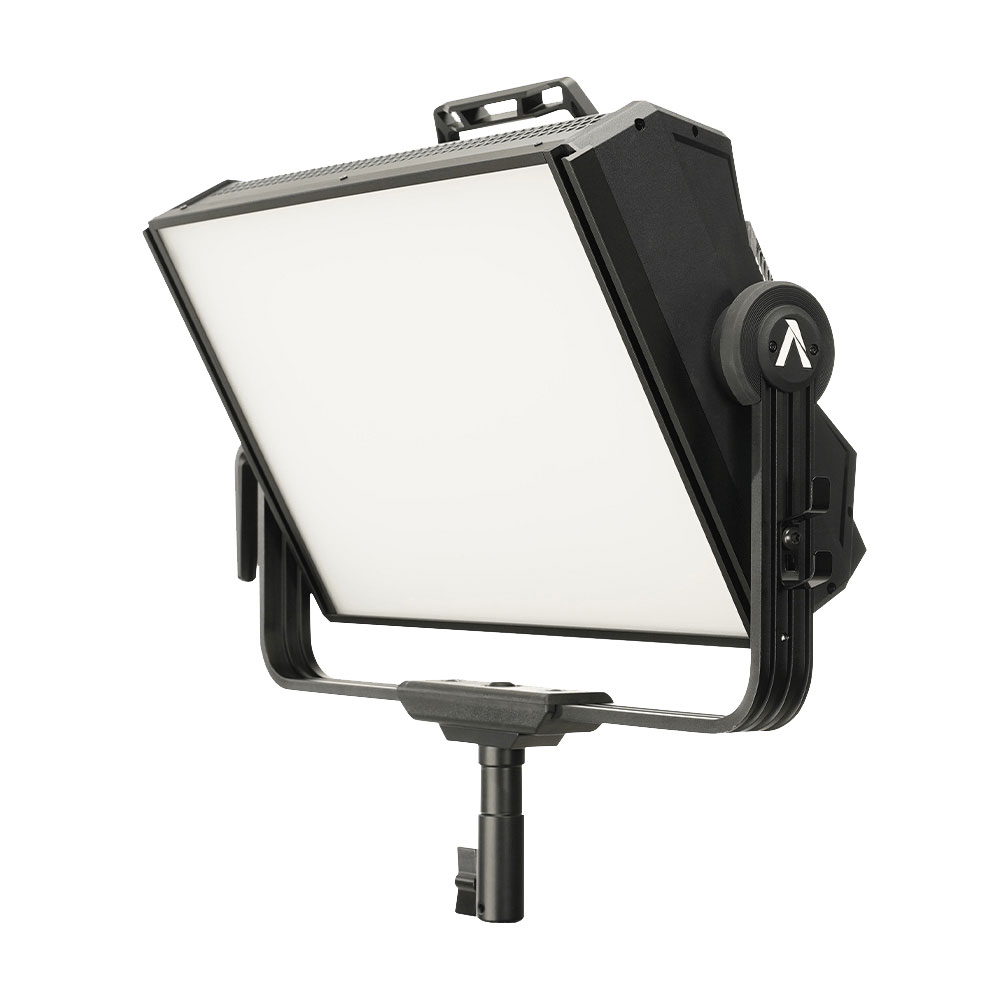 The P300c is an RGBWW LED fixture that’s a touch wider than an S30 Skypanel with built-in gels, effects, HSI, other presets, and all the goodies you’ve come to expect from a modern LED panel. Compared to the S30 it has a 10deg wider beam angle, 800K warmer Tungsten end (2000K vs 2800K) with the same 10,000K top-end and standard Green/Magenta shift control. It also does seem to be brighter by a couple hundred varied lux across the spectrum, advertised at 9000lux at 1 meter. Just from playing around with it at 100% I can believe that. Apparently the S30c “Intensifier” puts it more in-line with the P300c, but what I can say is that the light set to cyan, with another cyan gel and 251 diffusion, set to less than 100%, was giving me a reflected reading of f8 with the light 12’ away from the wall. Plenty of power for modern cinematography. 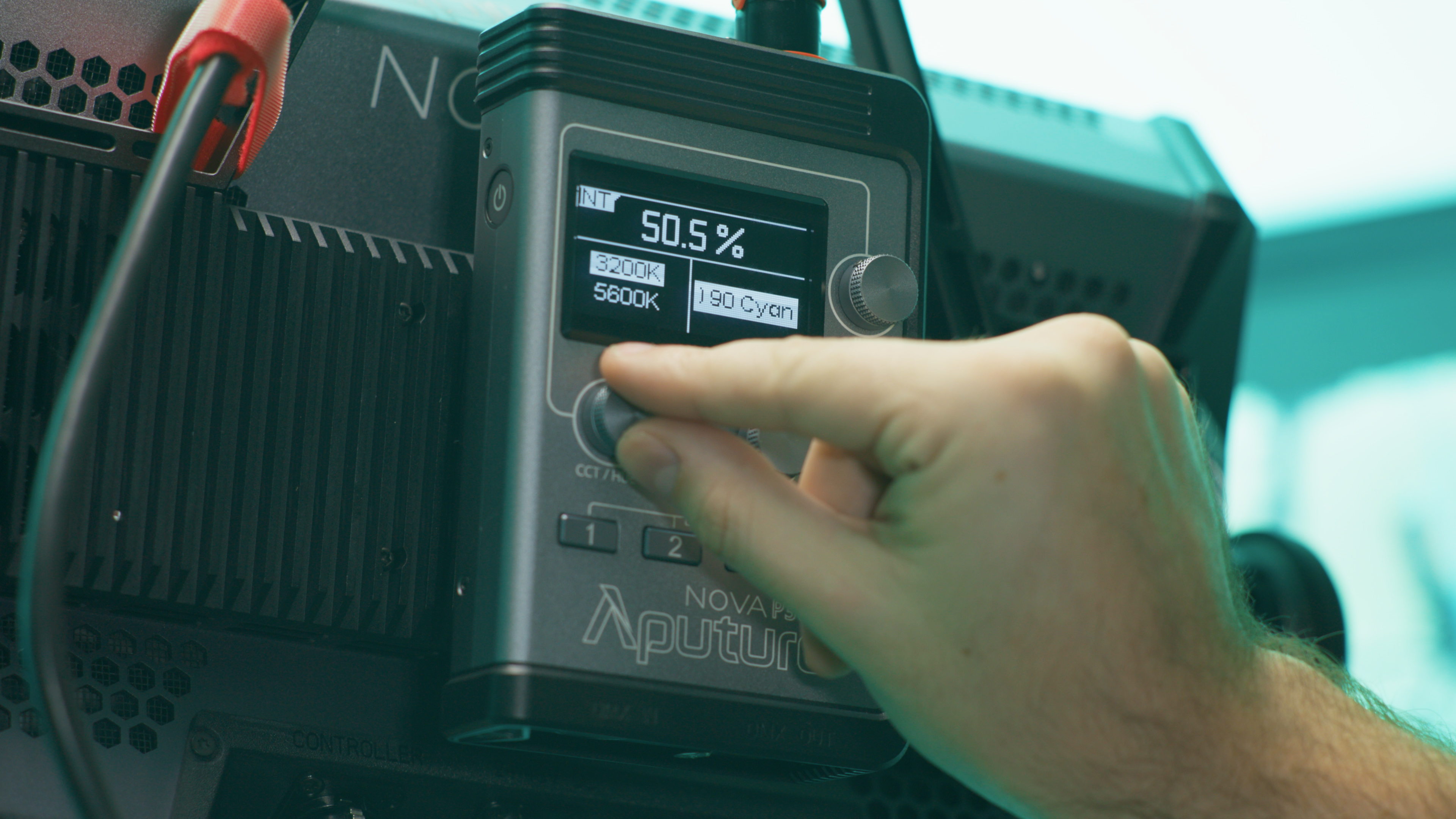 I can’t say there’s a “highlight” feature of this light necessarily, something that stands out as truly unique, but I will say that it is bright. Really bright. People-complained-about-it bright. Oddly enough pure-red was blinding too, which is rare. But, as a strict “exposure” device this thing is incredible. I’d use it on any interview style shoot easily; make it your key, dial the CCT to match the room, you’re set. Have two and you can do the background with any hue you want and give yourself a lot of options in terms of how you “dress” the set. Being able to dial in the exact color temp of the light you’re trying to match is one of the big benefits of an RGBWW fixture like this, and since it has a Tungsten and a Daylight chip along with the RGBs, you can be sure your color temps are dead accurate (and they are).

Now, It’s still an RGB panel so it still can affect the colors in your scene, as Aputure has outlined in one of their Indy Mogul videos, so it’s not strictly a replacement for having gels but as an “affect/effect light” it’s fantastic. If you don’t know, traditional lights (even after being gelled) don’t tend to affect the way colors look in the same way that RGB LEDs do. With RGB, certain colors in your scene can be interpreted by the camera as something else due to the reduced color spectrum output of the RGB LEDs. In this way, certain settings on the P300c are more akin to lighting with a neon sign than a tungsten Fresnel gelled to Cyan (for instance). I will say that the gel library is very nice, instead of the made up gel presets that I’ve run into in some of these reviews. They’ve got the name and type there in plain, familiar language, referencing real-world gels, and by my eye it does seem to match what they say it is (although you can’t “double up” like you can with normal gels). For lighting a space that can really come in handy, and for the more gentle “gels” it doesn’t mess with your colors too much. 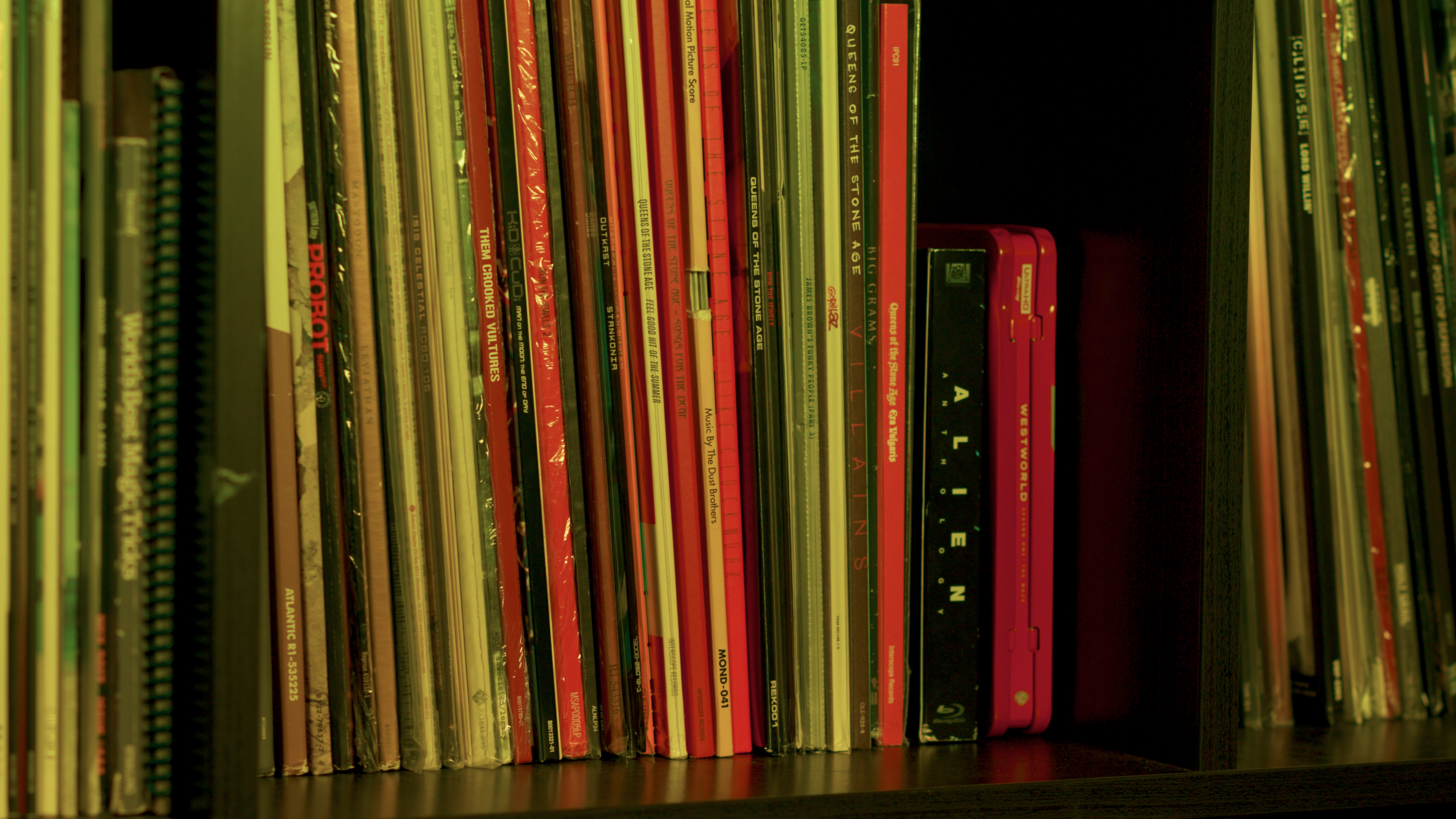 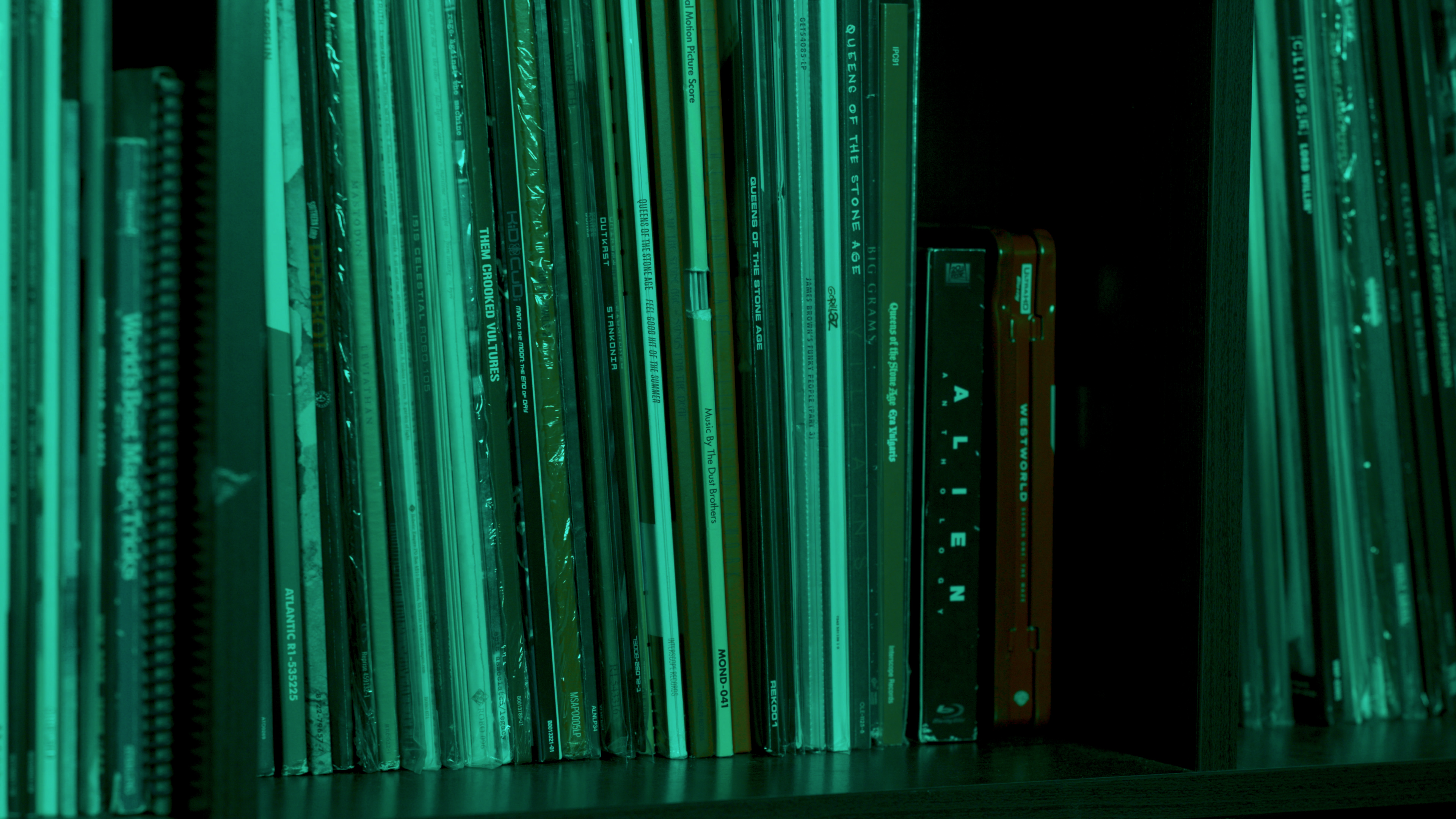 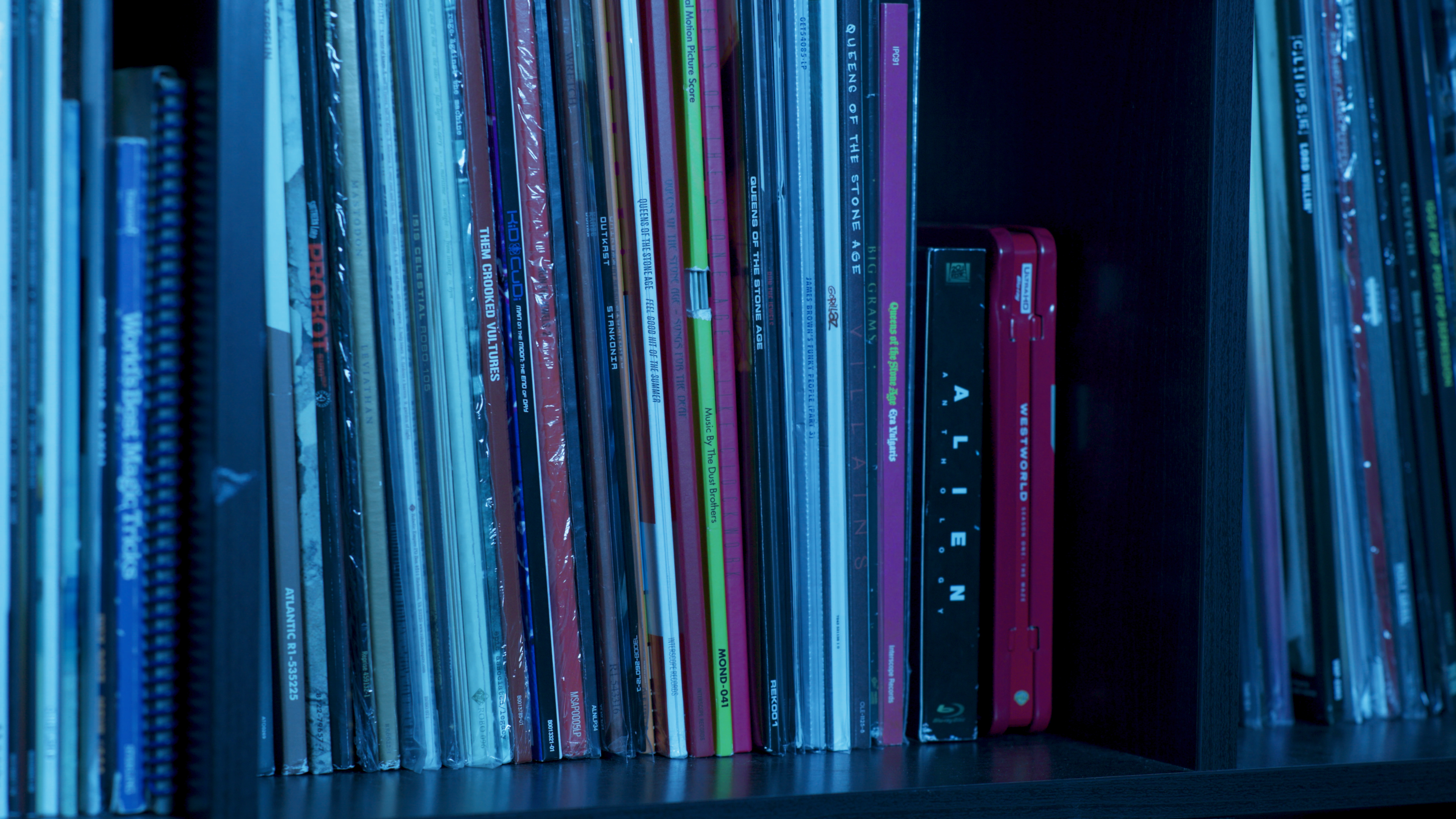 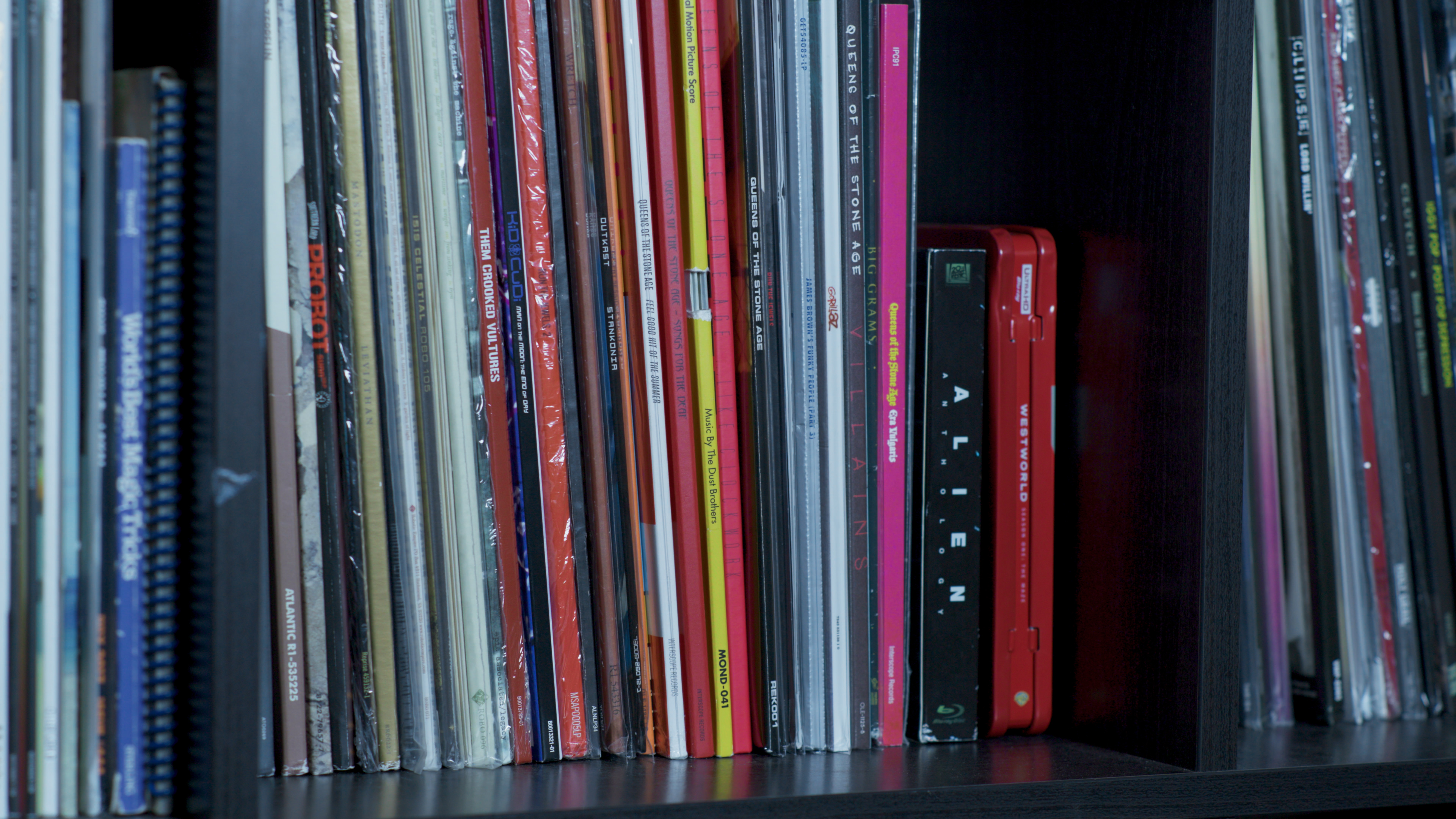 Because of all that, in certain instances I would almost want the light on the face of the actor (or hero product) to be a traditional tungsten fixture or HMI or something gel’d/diffused however is called for, but then everything else could be these panels no problem. It totally depends on your scene and setting though. A good compromise would be to just set the Color Temperature to whatever you need it at and then use your old trusty gels on the panel like you normally would. That being said, if you dialed in the cct/hsi to make your talent’s skin look a certain kind of way, exactly the way you want it to look on camera, that’s not something to brush aside. That could be a valuable tool, depending on the project. The “color changingness” of the RGB isn’t necessarily a detriment, it’s just something you need to think about when deciding what lights to use and where. Overall it’s a unique new tool we’ve gotten in the past decade or so and it’s a beyond-helpful addition to your lighting kit.

The way I think about it, traditional fixtures give off “real” light and LEDs give off “artificial” light, so if you want to show a heightened-reality situation, for instance, LEDs would be better suited, whereas if you want the scene to seem grounded, use Tungsten/HMIs or only the CCT settings on your panel (again, with the P300 those appear to be dead-on accurate) and then if you need, use traditional gels on top of them. It’s all personal preference though, and good quality LED fixtures give you a ton of options which is always welcome.

Moving on, the control box feels incredibly sturdy. The metal knobs have a satisfying “click” with each value turned, moreso than the sort of plastic-y soft knobs on the Skypanel, and the LCD screen is super high contrast opting for white text over a black background. You can also place the control box anywhere you like with the longer extension cable and a simple clamp (say, on the c-stand). You can even mount it upside-down if you’d like 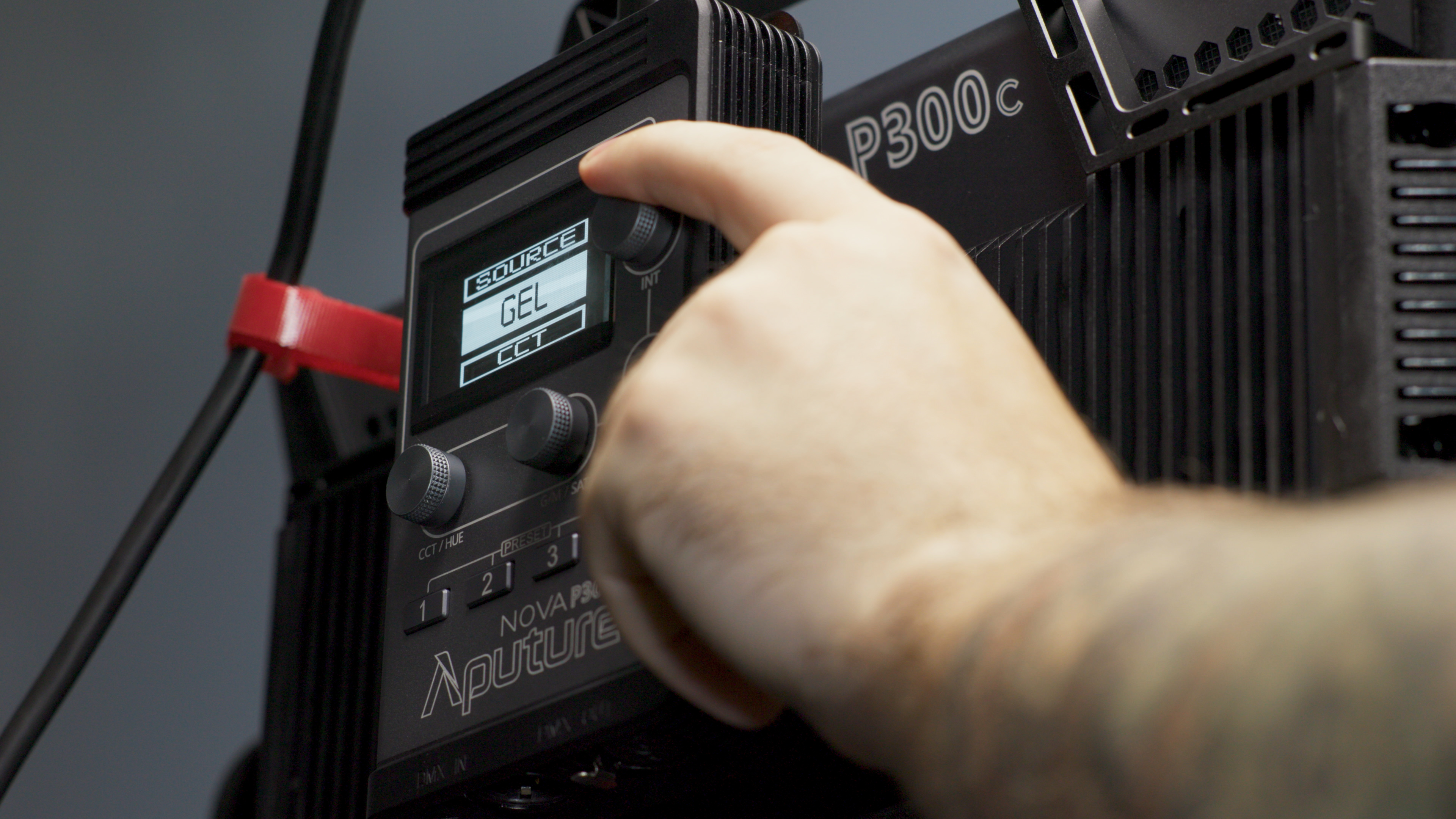 The power cable supplied is super long with no bulky box section or ballast (which is built into the fixture itself), which I love. It’s got standard plugs that you’re used to and draws 360W (60 more than its name would suggest). The closest familiar analogue I would say is the Skypanel S30c but 2” wider. The S60c is 9” wider, which I assume is what more people are used to and it’s not as big but it weighs about as much coming in at 22.8lbs to the S60s 26.5lbs (an S30 is around 20lbs). To that end, I’d suggest getting something like a Minimax to boom the light, if you were planning on doing so, since a regular c-stand arm will start to bend pretty fast. 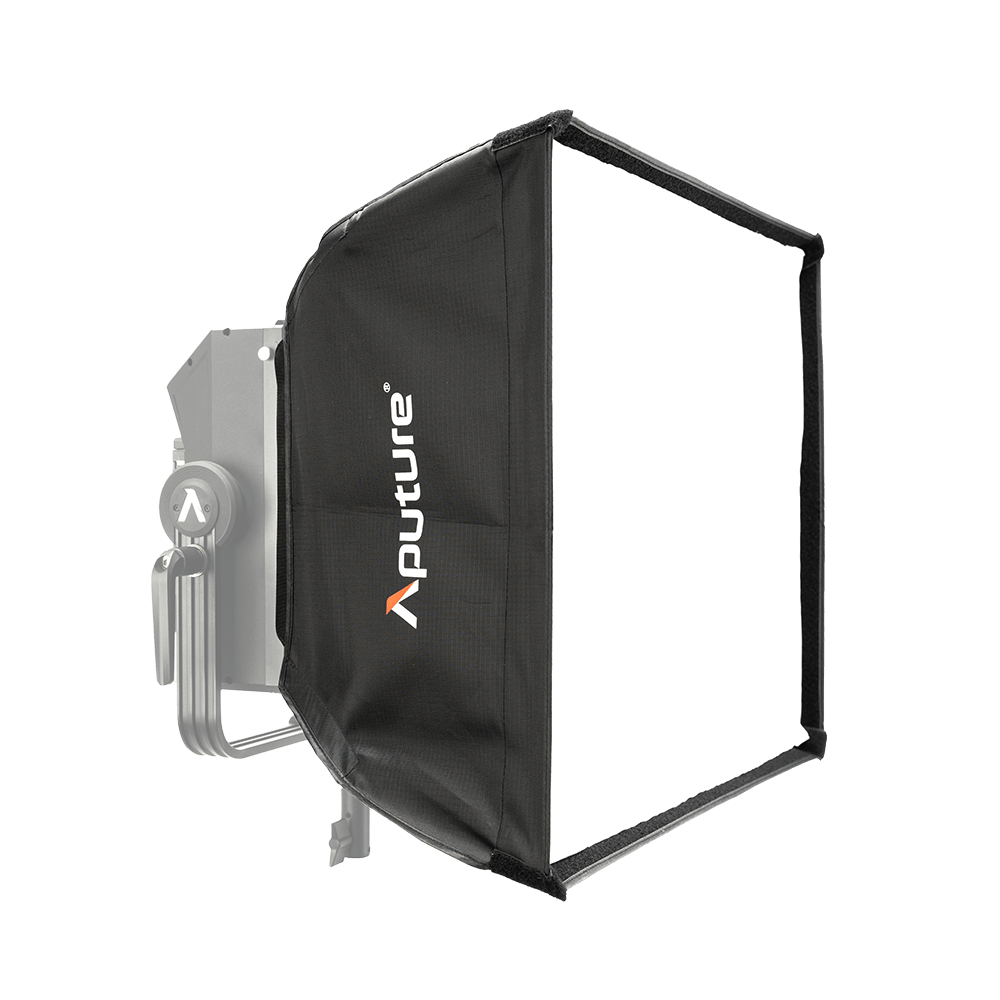 As you’ll likely want a soft light with this source, you’re gonna want to get the softbox diffuser, although I hope Aputure gives you some other options in the future, and you’ll definitely want the roller case because you’re going to need those wheels to haul this thing around. It’s a super durable case, custom foam cutouts, multiple beefy plastic clamps to keep the thing together, and handles on all sides so when you go to lift it into your 4Runner you can throw out your back with confidence. In a studio setting, though, where it’ll be living on a stand with professional grips and rigging around that may very well not be an issue. 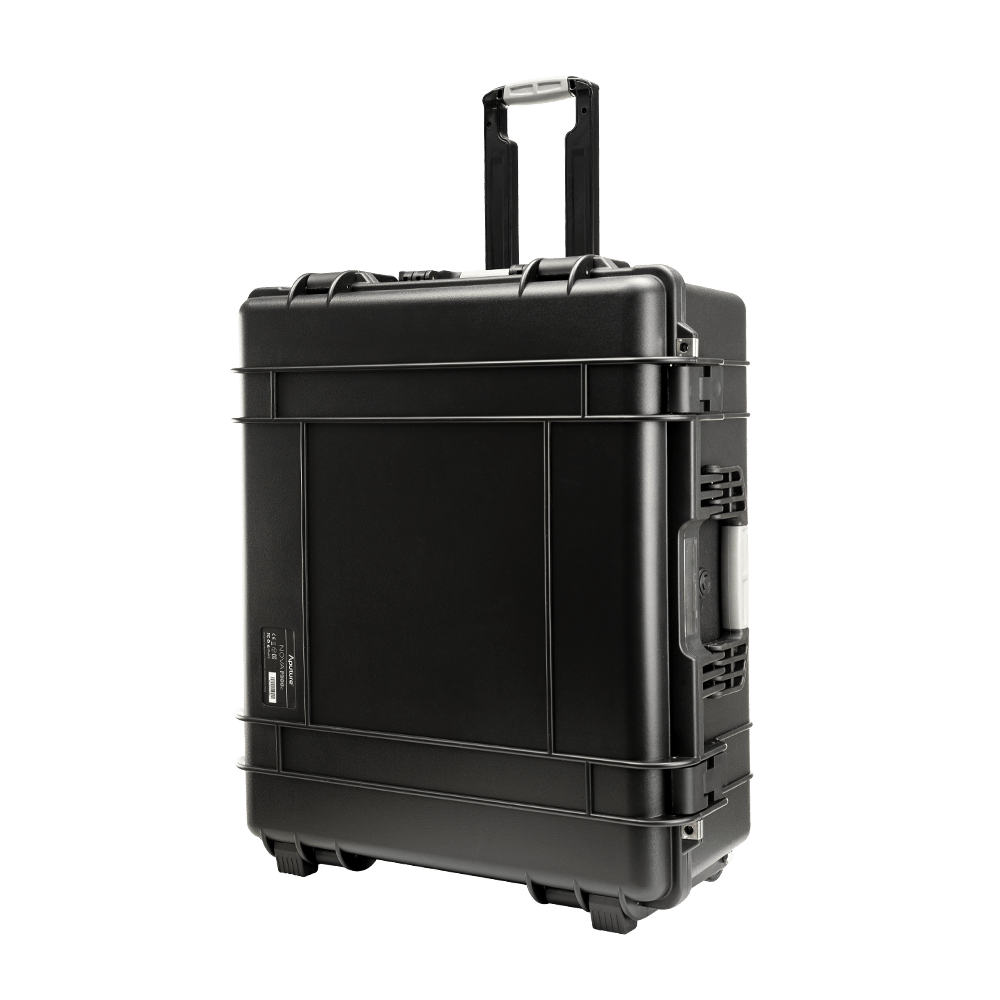 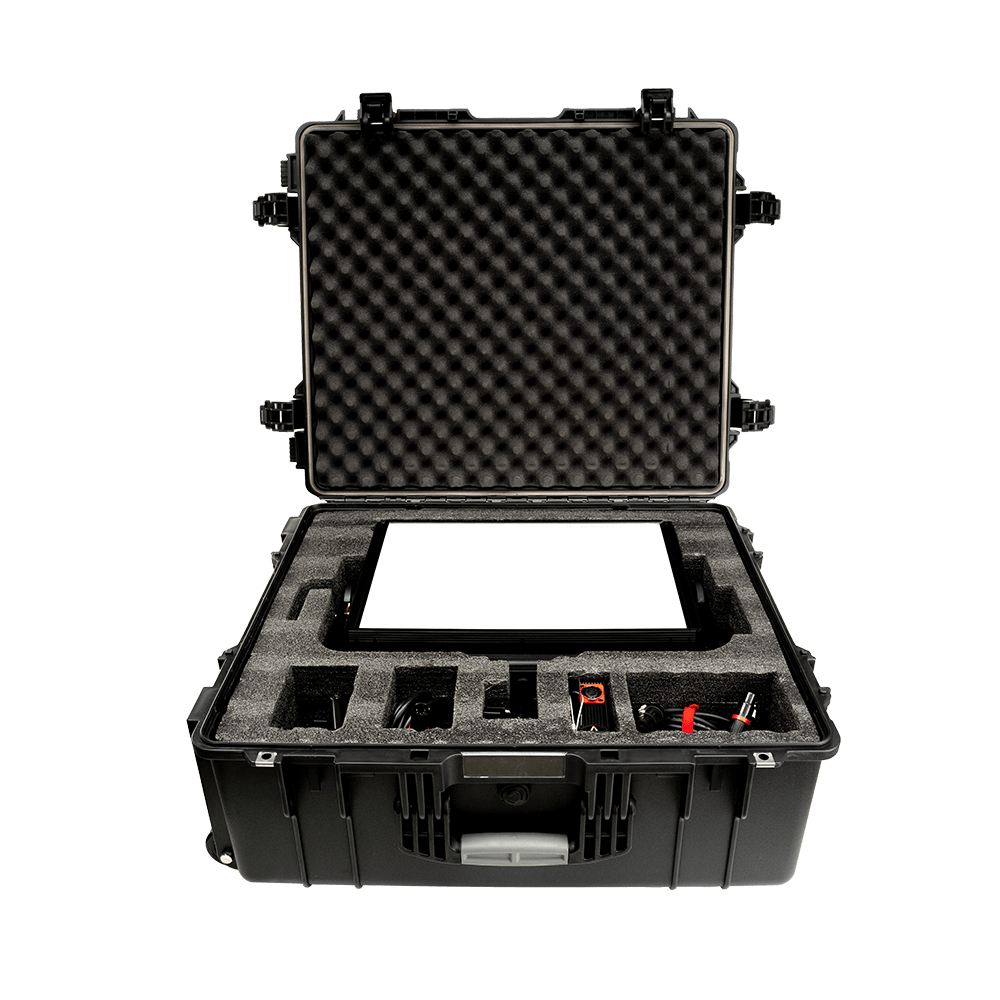 One thing I don’t like is that the cables JUST don’t clear the yoke when you pass the 90° point. Like, they do, but they still knock up against the horizontal bar and that annoys me. Skypanels do this too and I hate it. Make the yoke a bit taller so it clears it freely? Just an inch or two or whatever it is? Maybe change the angle of the port itself? If you loosen up the brake, which feels very sturdy like everything else on this fixture, the fixture naturally goes panel-up which means that cable will hit your crossbar. A small complaint but I bet over time it’d damage the cable if you did it enough. 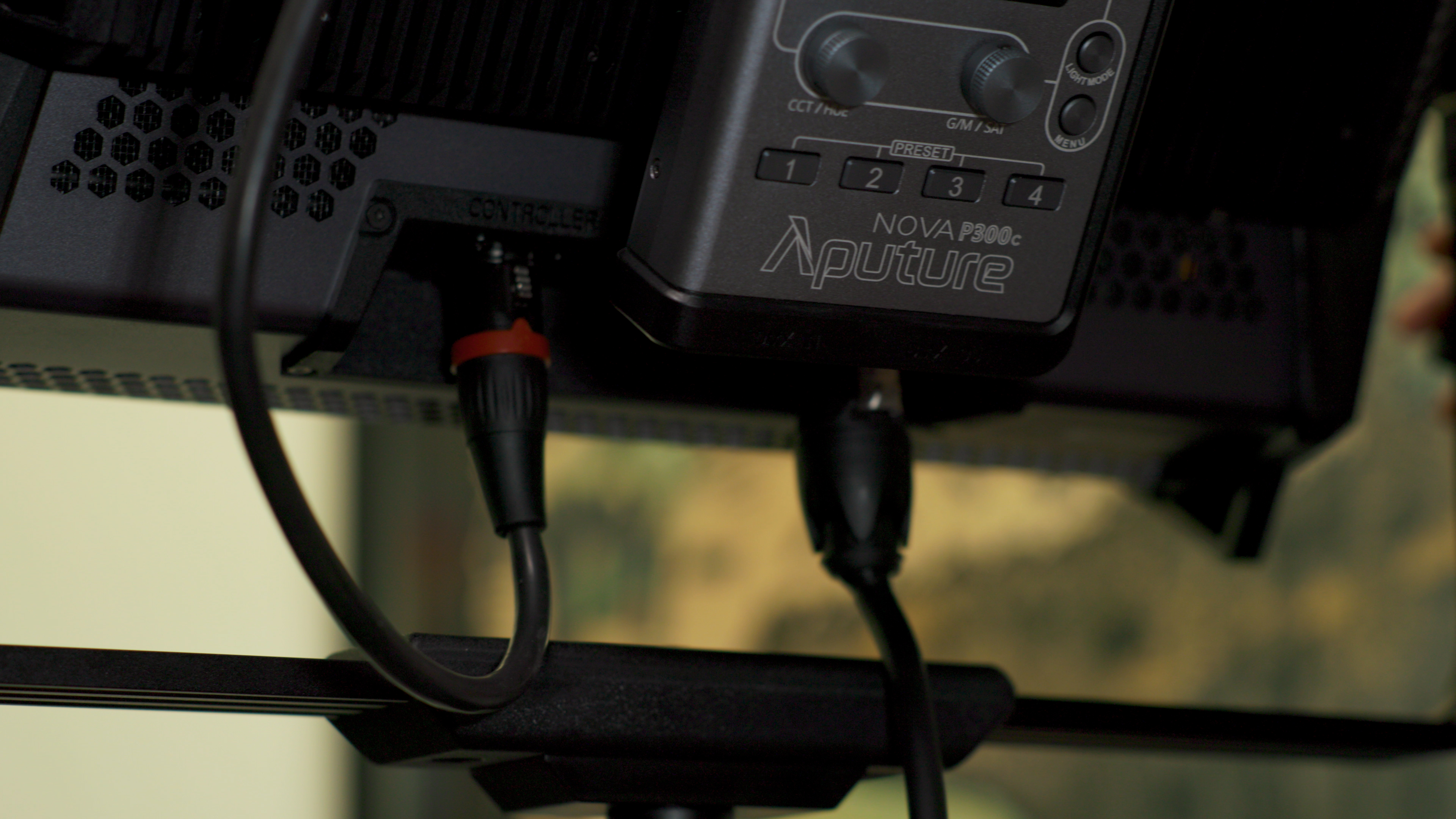 In regards to the fixture itself, it looks more “cool” than “workmanlike”, with the plastic “Alienware-looking” end-caps making the otherwise all-metal fixture seem somewhat plasticy, as the texture actually does match some of the metal accents. The whole thing is black and dark purple so you don’t easily differentiate between the plastic and the metal, but looks are deceiving because this thing does feel bombproof. Now, would I want those end-caps to be metal? No, I’ll take any weight-savings where I can on this light, however the design just comes off as kind of “Gaming PC” if that makes any sense. It doesn’t matter, but it’s something I noticed.

Overall, the P300c seems like an excellent fixture. I love the build quality, the output, the variety of light options, the quality of light, and the ease of use (I figured it all out just by turning it on). I think you could talk about this fixture alongside the Gemini Panels and Skypanels easily, barring any DMX downfalls (which I can’t test here as it stands), and I really see these things becoming commonplace on sets big and small alike as the 120D and 300D before it. Aputure has really made a winner in the P300c.

I think the fact that I’m barely talking about the “light” part should speak to how good it is. It’s almost unnoteworthy; it does exactly what it says on the box. All top-tier LED panels probably look pretty similar, but the interface and breadth of options are what you’ll likely base your decisions on and this panel feels like it covers all the bases. It’s bright as hell, incredibly flexible, super sturdy, and allows you to dial in whatever color you could possibly want. You can even use the Sidus Link app to control it, if you’ve got it in a place that’s hard to reach and can be powered off of cinema batteries if you need to go mobile (although that’s an additional accessory plate.

So, for just shy of $2000 (including the case) you’re getting a slightly heavier, brighter light than a similarly-sized Skypanel with all the functionality and ease of use for about half the price. That’s not a bad deal. Normally I’d use this on a gig and report back, but since we’re still not gigging I suppose this little rundown will have to do but I’d love to take it out on a job in the future as a follow-up and see how it does.