Yes, you can —and should— be using an Apple Magic Trackpad 2 with your Chromebook, iOS/iPadOS, Linux, Windows 10 LTSC computer and iPad (Pro) in addition to macOS where it’s most common.

If you have been reading my articles for the past twelve years in English (or decades if you also read Castilian), you know that I am into quality, open usability (worldcams), clear nomenclature (non-integer framerates supported and properly expressed), good UI, proper 48 kHz audio sampling, ergonomics and health. You already know that I love high quality matte screens, proper terminology in menus and that for decades I’ve successfully evangelized the unique advantages of physical Spanish ISO keyboards worldwide, even for those users who only type in English or other non-Hispanic language(s) of which there are now six official ones (excluding unofficial ones). At times, Apple has been poor in some of those key areas, but in others Apple has excelled without due credit. I have previously applauded Apple for being the only mainstream computer manufacturer to openly offer open sale of all of its Spanish ISO keyboards even in the United States (the number 2 Castilian-speaking country in our planet), both external keyboards and the inboard ones available in built-to-order Macbook laptops. Another area where Apple doesn’t get enough credit is with its amazing yet under-promoted Magic Trackpad 2. In this review article, in addition to praising the Magic Trackpad 2’s unparalleled smooth operation, I’ll dispel myths about its connectivity and its multiplatform compatibility, all in a very positive way.

My journey from mouse… to trackball… to trackpad

The first computer to arrive to my family when I was in my early college years was the original 128k Macintosh. 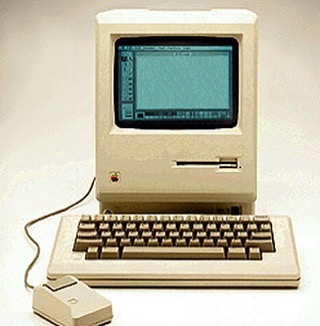 That prehistoric beast came with a single-button wired mouse which connected vie the now defunct ADB (Apple Desktop Bus), which was a a proprietary serial peripheral bus that connected low-speed devices to computers. 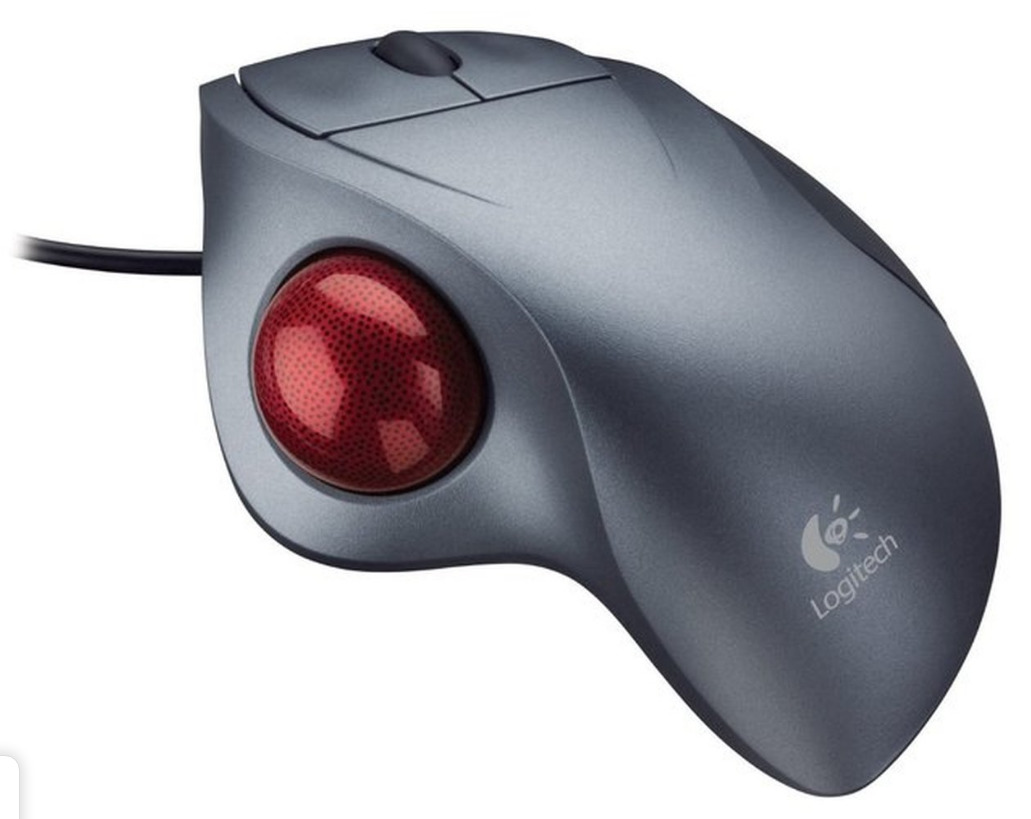 From there, I moved to a Logitech trackball (shown above, the only form factor I ever liked in an external trackball). I loved the jump from mouse to trackball:

But then gestures on trackpads changed everything, both in general computing and when editing audio and video. These are the first category:

Below are some that work in FCP X and other editors: 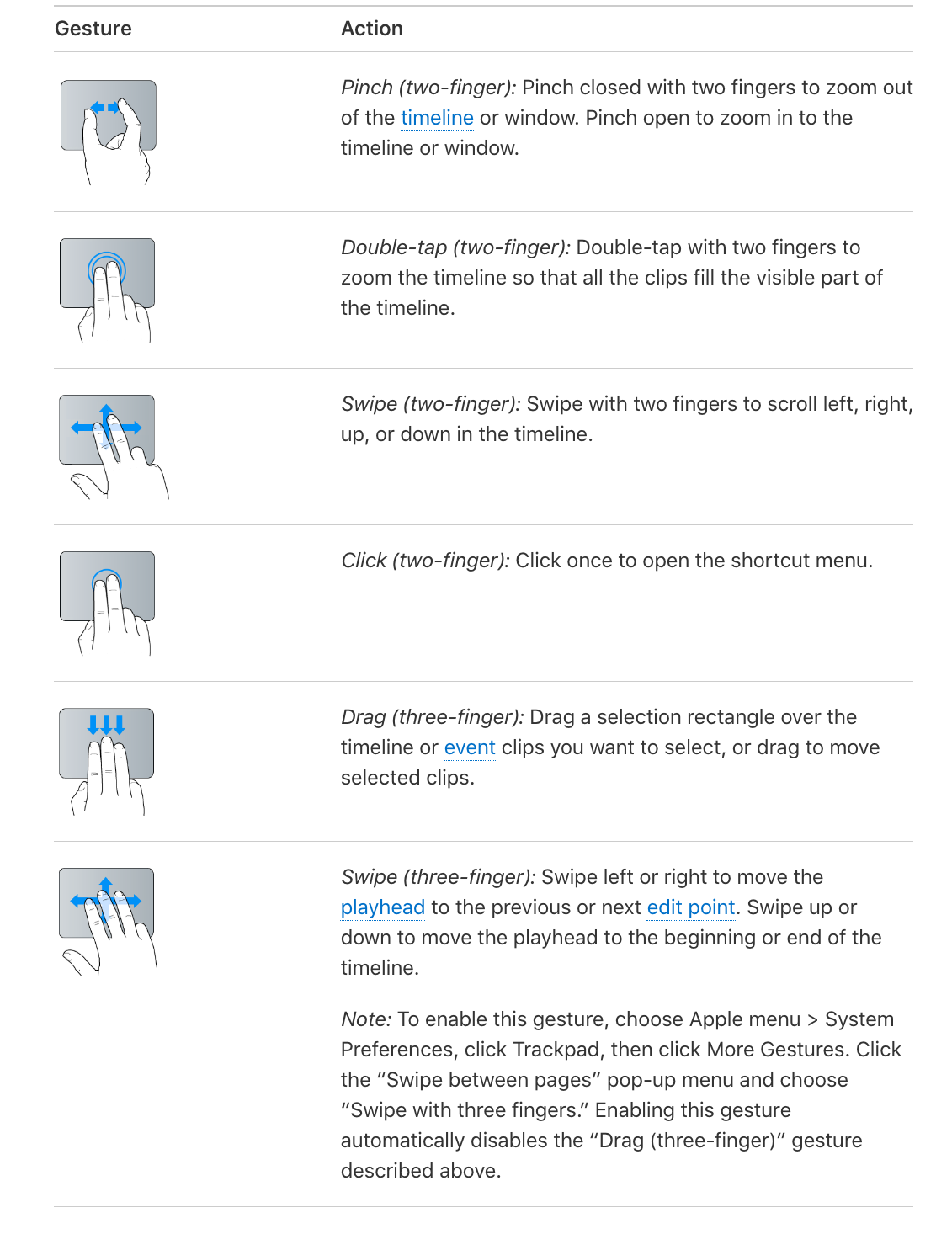 Above, Josh Petok goes over more gestures that can be added for DaVinci Resolve using a shareware app called BetterTouchTool.

On the other hand, the current Magic Trackpad 2 is larger, can operate wired (Lightning<>USB) or wireless (Bluetooth). It has single internal battery which is not officially user-replaceable. Although my friends who own the Magic Trackpad 2 always using it wirelessly, the best reliability can be achieved with the wired connection, so that’s how I’m using it. Apple says that the internal battery will last about a month before recharging. Those who want to minimize their EMF exposure may prefer the wired connection too. The Magic Trackpad 2 feels like it has a physical click mechanism (similar to the original one) but it does not. Instead, the Magic Trackpad 2 has haptic feedback via Apple’s built-in Taptic Engine.

Per Gabriel Robles-De-La-Torre. International Society for Haptics: Haptic technology, an animated explanation , haptic technology (aka kinaesthetic communication or 3D touch) refers to any technology that can create an experience of touch by applying forces, vibrations, or motions to the user. That’s why it feels like the Magic Trackpad 2 has a physical click. However, you will feel absolutely nothing at all when trying to click when completely disconnected… or connected to a computer platform which lacks drivers for the Magic Trackpad 2. In the case of the macOS, there is built-in support since version 10.11 (El Capitán, where Apple sadly neglected to include the accent mark) and up to the current Catalina 10.15.x. Presumably, this will continue with the successor of Catalina (10.16), which should be announced on June 22nd, 2020 at WWDC. Ahead in this article, I’ll cover available driver support for the Magic Trackpad 2 in ChromeOS (Chromebook), iOS/iPadOS, Linux and Windows 10 LTSC.

It might surprise you, but today there is direct support for the Magic Trackpad 2 in ChromeOS because thankfully, Google contributed patches to the Linux kernel for Magic Trackpad 2 support included in version 4.20 released in 2018. My friend George Par has been using a Magic Trackpad 2 with his Chromebook for many months, 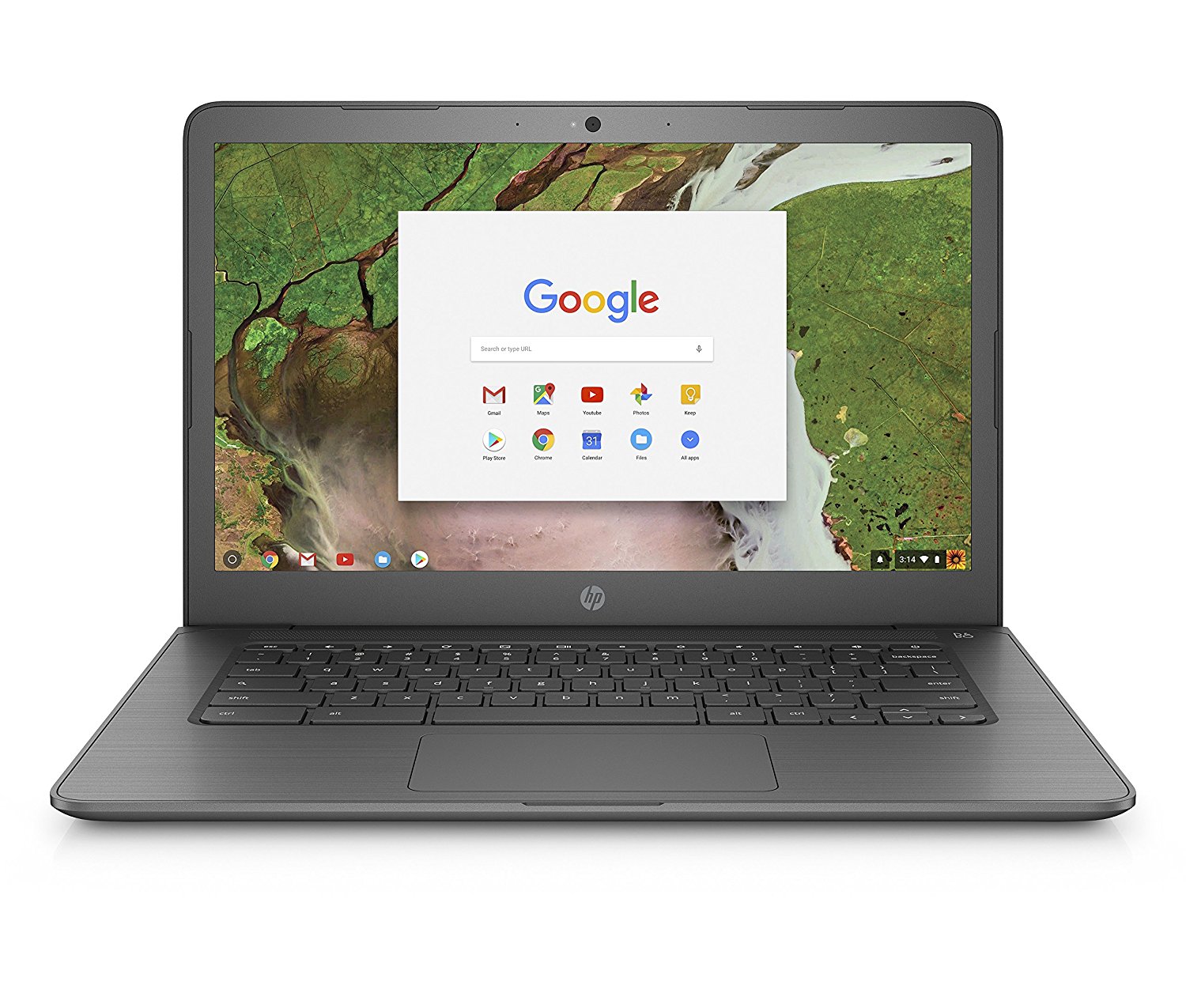 the same model I reviewed in 2018 (illustrated above). That model fortunately features an IPS matte screen.

Above, Robby Payne of Chrome unboxed demonstrates how well the Magic Trackpad works with ChromeOS.

As I covered previously, full support for trackpads arrived to iOS/iPadOS version 13.4. This superseded the haphazard trackpad support which arrived under accessibility settings with the first version of iOS 13 and iPadOS in 2019.

There are many different ways to accomplish it. Here is my favorite one so far:

Above, J Tech Workshop demonstrates the method using Windows Precision Drivers. Here is the link to download the free driver he mentions in the video. I actually prefer to connect the Magic Trackpad 2 wired (as opposed to wireless), so I am happy with this method. The video also compares the gestures with this method on Windows versus the native macOS gestures.

I followed this with my Windows 10 LTSC and it worked perfectly as described. Although I mainly work with macOS, I am becoming more aware of the possibilities that exist with Windows 10 LTSC. 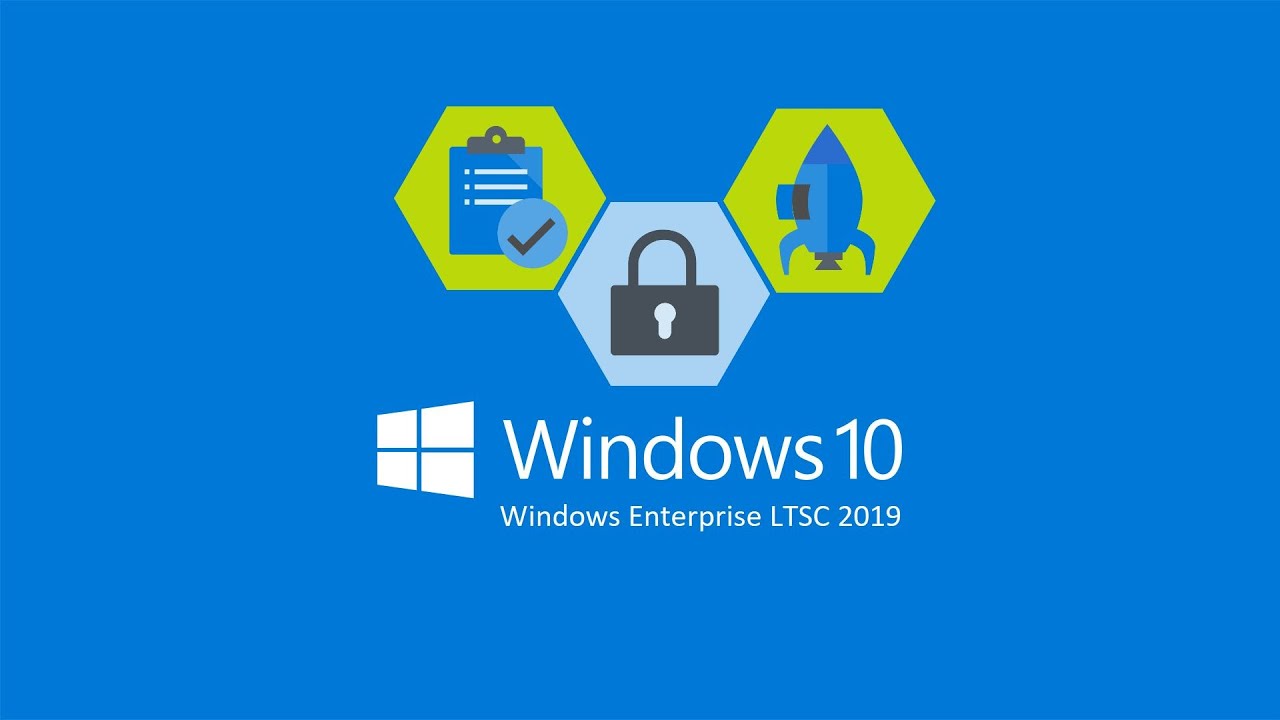 Still image credits for this article

The image of the 128k Macintosh is courtesy of Fresh On The Net, Some Rights Reserved. The gesture images are courtesy of Apple.

As I stated in the title, the Apple Magic Trackpad 2 outclasses any other pointing device on any OS. That includes your Chromebook, iOS/iPadOS, Linux, Windows 10 LTSC computer and iPad (Pro) in addition to macOS. In my experience as I work, the Magic Trackpad 2 becomes an extension of my brain. I prefer the Magic Trackpad 2 over a touch interface. Some things are worth the price, even as an accessory for an inexpensive Chromebook, as my friend George discovered. The Magic Pro 2 is available directly from Apple in two different colors: Space Grey (almost black) for ≈US$149 or Silver for ≈US$120.

Stand by for upcoming articles, reviews, books and courses. Sign up to my free mailing list by clicking here. If you previously subscribed to my bulletins and no longer receive them, you must re-subscribe due to new compliance to GDPR. Most of my current books are at <a href=”http://books.allantepper.com” rel=”noopener”>books.AllanTepper.com</a>, and my personal website is AllanTepper.com. Also visit radio.AllanTepper.com.

Allan Tépper purchased the Magic Trackpad 2 with his own funds for his own work and for this review. No manufacturer is specifically paying Allan Tépper or TecnoTur LLC to write this article or the mentioned books. Some of the other manufacturers listed above have contracted Tépper and/or TecnoTur LLC to carry out consulting and/or translations/localizations/transcreations, including Apple many years ago. Many of the manufacturers listed above have sent Allan Tépper review units, including HP and Logitech, but not Apple. So far, none of the manufacturers listed above is/are sponsors of the TecnoTur , BeyondPodcasting CapicúaFM or TuRadioGlobal programs, although they are welcome to do so, and some are, may be (or may have been) sponsors of ProVideo Coalition magazine. Some links to third parties listed in this article and/or on this web page may indirectly benefit TecnoTur LLC via affiliate programs. Allan Tépper’s opinions are his own. Allan Tépper is not liable for misuse or misunderstanding of information he shares.