I like many of Apple’s improvements in Mac OS X and iOS, but request correction of El Capitán’s spelling.

At the recent WWDC, Apple announced several improvements both in its upcoming Mac OS and the upcoming mobile iOS 9. At the same time, Apple unfortunately blundered when presenting the name for the new Mac OS, called El Capitán. (Apple neglected to include the accent mark.) Ahead I’ll cover my favorite improvements in both operating systems, and include a link to my online petition for Apple to fix the spelling of El Capitán.

At the recent WWDC, Apple announced several improvements both in its upcoming Mac OS and the upcoming mobile iOS 9. At the same time, Apple unfortunately blundered when presenting the name for the new Mac OS, called El Capitán. (Apple neglected to include the accent mark.) Ahead I’ll cover my favorite improvements in both operating systems, and include a link to my online petition for Apple to fix the spelling of El Capitán.

This article is not intended to be a complete list of improvements, but the ones I find the most compelling, in order of importance in my opinion. For the complete list, visit Apple.com (or your regional Apple site).

My favorite improvements in the upcoming iOS 9

Before telling you about my favorite improvements in the upcoming iOS 9, I want to clarify which devices will accept it. (Ahead I’ll explain how the iOS 9 download weighs a fraction of what the prior iOS download did.) 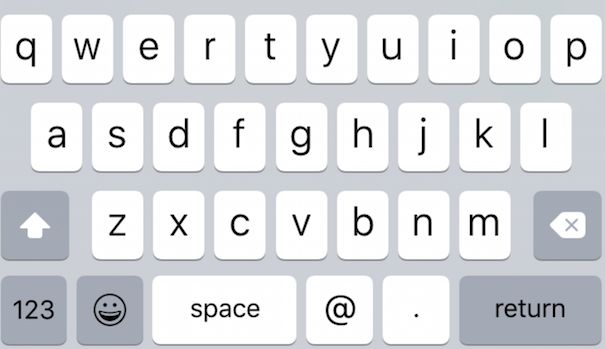 With iOS 9, the native (i.e. not third-party) keyboard that comes with your device will finally have the capability of showing lowercase when you’re going to type in lowercase. Of course, it will also show uppercase when you’re going to type uppercase. This detail is one of several reasons why I have avoided iOS for my main mobile “phone” device, and I am very glad that Apple has finally addressed this issue, after many years of requests from users. This was shown —but not mentioned verbally— during the keynote presentation at WWDC. With the current iOS 8 and prior iOS devices that have not been jailbroken, the Apple keyboard shows all keys in uppercase all the time, even when you are set for typing in lowercase. The upper/lowercase indicator prior to iOS 9 is confusing. Although starting with iOS 8, we can purchase a third-party software-based keyboard which shows upper/lowercase in the natural, intuitive way, for security reasons, Apple designed iOS 8 to return to the native keyboard whenever a password has to be entered, which is where it is even more important to be able to distinguish between upper/lowercase, since the onscreen password quickly turns visibly into asterisks. I am very happy about this improvement in iOS 9’s keyboard.

The iPad’s built-in Shortcut Bar above the keyboard

The new built-in Shortcut Bar on the iPad allows you to apply bold, italics, underline — even copy and paste — directly from the keyboard. The Shortcut Bar can also be customized for third-party apps, so the tools you need are always right where you need them.

The onscreen iOS keyboard turns into a trackpad… 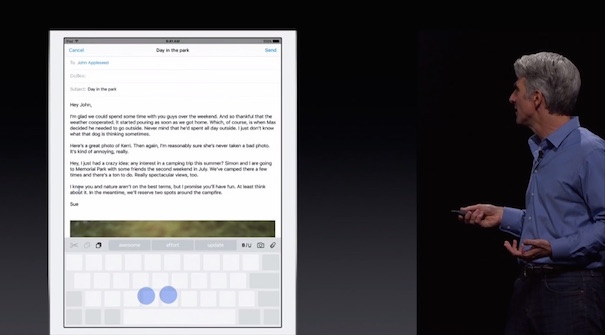 The onscreen iOS keyboard turns into a trackpad when you approach it with two fingers. For those who do a lot of typing with iOS devices, since it works also for cursor location and easier text selection. I personally don’t type articles or books with any iOS device, since I use an 11″ MacBook Air which can handle applications that currently don’t exist on iOS, like Final Cut Pro X and Hindenburg Journalist PRO (reviewed in Meet the Hindenburg family of audio production/editing tools and Why Hindenburg Journalist PRO is the best Skype audio production tool I’ve ever used). However, this is very important for those who do type a lot with iOS. 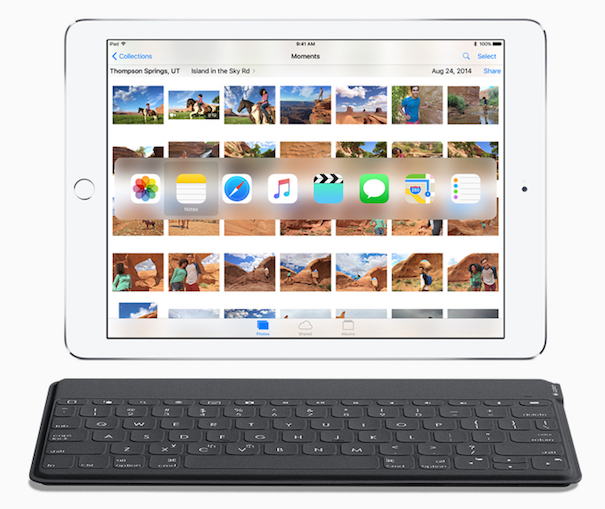 If you do a lot of frequent switching between apps on the Mac, you will likely find this new feature in iOS quite familiar, although it will only work with an external keyboard in iOS. Just as with the Mac, you press and hold the CMD key, and then press TAB to change quickly among running apps. The previous lack of this feature on iOS was one of several reasons why I didn’t consider iOS for serious research/writing production. 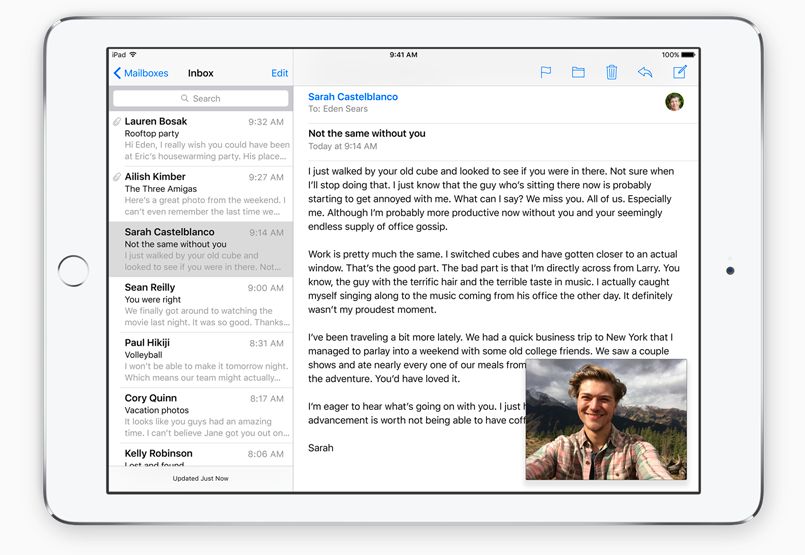 This new feature in iOS 9 (on iPad only) allows playing a video while working with another app, or FaceTime superimposed while using another app. Presumably, this will become available for third-party developers too, so perhaps Bossjock Studio (reviewed here) will finally be able to have a direct integration with Skype to integrate Skype calls without external hardware.

An extra hour of battery life

Across the entire iOS 9 operating system, Apple’s says that they’ll squeeze out an extra hour of battery live, and Apple has always been very conservative with its battery life expectations. Apple says that apps and key technologies have been made more efficient to trim battery usage wherever possible. They say that thanks to ambient light and proximity sensors, your iPhone knows if it’s facedown on the table and prevents the screen from turning on, even when you receive a notification. There is even a Low Power mode that lets you extend battery life even further.

iOS 9 efficiently streams new updates to your device without having to download first and then unpack them — which means you don’t need as much free space to update. Apple compares the updates as follows:

Although you’ll find many listed on Apple.com or your regional Apple website, there are many fewer irresistible ones that I am going to list here, again in order of importance in my opinion:

Apple says that in the latest version of Mac OS X El Capitán (which should run an existing Macs that are compatible with Yosemite), they have made all kinds of things run faster — like accessing email and launching or switching between apps. Apple says that these little things that make our Mac feel faster and more responsive. Apple has also brought Metal to Mac (previously only available on iOS), so they say we’ll experience more fluid performance in games, high-performance apps, and key system-level graphics operations.

Metal is a new graphics core technology that gives games and apps near-direct access to the graphics processor on a Mac, delivering enhanced performance and a “richer graphical experience”. Apple states that Metal speeds system-level graphics rendering by up to 50 percent, as well as making it up to 40 percent more efficient. Metal allows the main processor and graphics processor to work more effectively together, boosting high-performance apps. And Metal is designed to be great for games, improving draw call performance by up to 10x and paving the way for new levels of realism and detail.

Apple backs this up with more numbers: 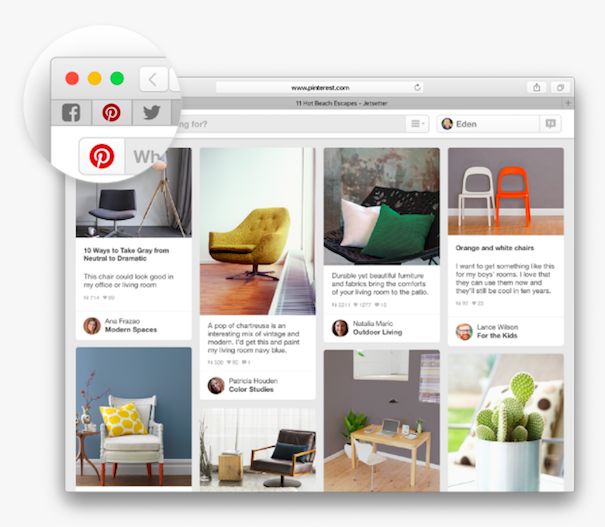 A feature that has existed in other browsers before, pinned sites lets us keep websites we visit often remain in the exact same place after quitting and re-opening the browser. Apple says that the pinned sites will stay active in the background, and they ’ll stay put on the left side of your tab bar.

With Safari in El Capitán, it’s possible to play video wirelessly from a web page to TV, video monitor or video projector with HDMI input with an Apple TV device —without showing everything else on the computer’s desktop. Apple says: “Just click the AirPlay icon that appears on compatible web videos and you can watch your video on the big screen.”

Safari new feature 3: Mute out a specific tab or all tabs

A feature that has existed in other browsers before, now in the El Capitán version of Safari, there is a way to silence either a specific tabs or all tabs, with a single click. 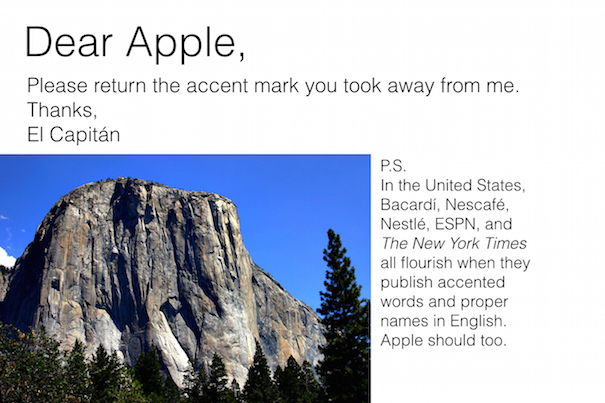 If interested, please click here, and then when you reach the petition site, please sign the petition for Apple to fix El Capitán’s missing accent mark (the way Apple has written it so far). Details are on that site. Please also share it with friends you think will agree.