Werner Herzog goes inside the skin with inmates’ personal commentaries 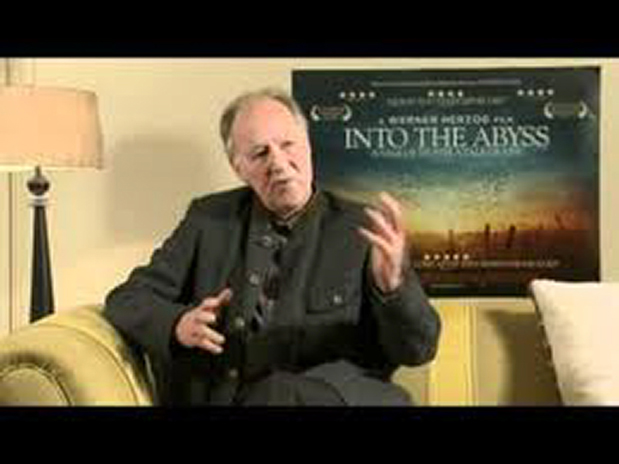 Jumping, itching inside my skin is how I felt watching Herzog’s latest movie – an enticing, loathing sensation that was all too personal – yet his approach made it impossible to stop watching or to forget the grisly details.

Karl and I can’t stop talking about this extraordinary film achievement. “Into the Abyss” is in our opinion cult filmmaker Werner Herzog’s best and most outrageous movie. This film gets under the skin of every person involved in a triple murder. It’s mesmerizing on screen, far past any news reporting we have ever seen. Way past the admitted blue ribbon expertise of Charlie Rose’ interviews.

How on earth did Herzog thicken his own skin to do this movie? And how did he get inside permission from the Texas Department of Corrections to film in the death chamber, inmates, corrections workers? Get under the skin and into the heads to elicit cooperation and willing interviews with death row killers, the victims’ families, the preacher who stands by holding the condemned man’s ankles, the officer who straps him down for lethal injection? 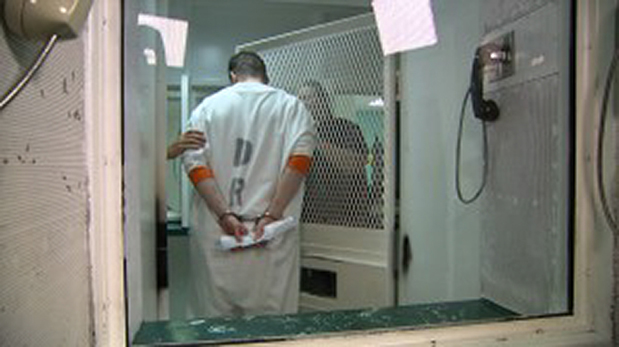 Remorse is not even skin deep for the main characters, the murderers, but Herzog allows the other players in the drama, the victims’ families and the corrections workers, to show how the crimes have changed their entire anatomies.

Every person in the movie is so direct, simply and unemotionally as to almost defy understanding, and yet the picture of off-hand violence is painted so clearly as to put the viewer right in the action. Fear and abomination are palpable. You can’t believe that you’re seeing what you’re seeing. You somehow perceive both the inside and the outside of the mechanics of the crime and the personas that drove the senseless, horrid events – both before and after.

Jason Burkett: Perry’s co-defendant, who married in prison with a young women outside who, although they are only allowed to touch hands under the supervision of a guard, mysteriously managed to become pregnant of him; it is implied that his sperm was contraband, smuggled out of the prison. 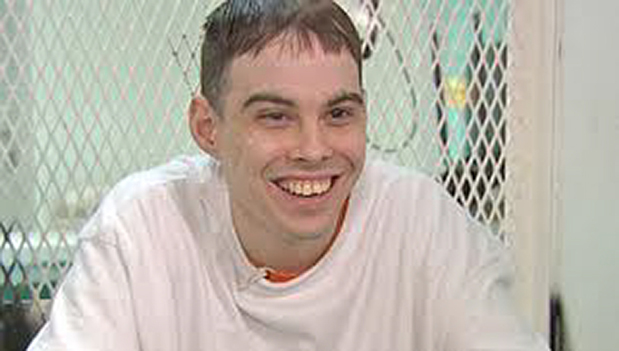 Perry who took the ultimate rap

Is it possible to call these people characters in the movie? Amazingly articulate, particularly the less educated persons, these characters tell all in their own way, answering every question by Herzog himself, whose voice steers the interviews, but whose face never seen on camera.

Dry, unemotional and explicit, Herzog’s questions are the opposite of an inflamed thriller. No sensationalism whatever. It’s the real people in the movie who are the literal flesh of ugliness, fear, horror, denial, lies, conflicting testimony, protestations of innocence and finger pointing of guilt past the convictions. 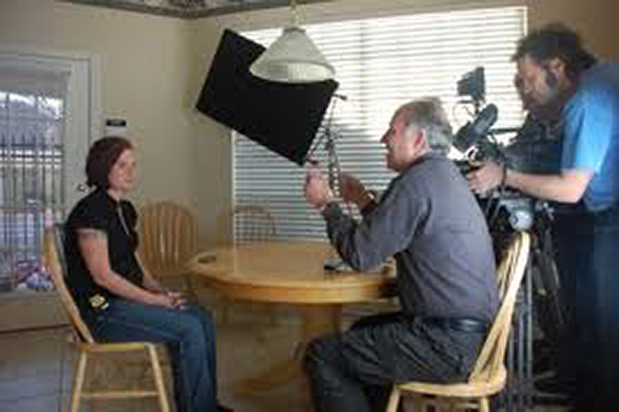 The deceptively simple, sordid story tells of two Texas ne’er do well guys plotting to steal a red Camaro from Sandra Stotler’s gated community home. In the process of slipping their way in, the amped up guys easily shot gun Mrs. Stotler, and then lure her son and a friend to ugly deaths. A few days later they shoot it out with police and are arrested, each proclaiming the other guilty to the end.

The protagonists in the story aren’t the only guilty parties. The slow pace of the revelations peel away the layers of society, of past crimes, of different viewpoints and of strange coincidence that put this viewer on the edge of her seat, involved in the history in a way that no fast-paced titillating expose could have done. Peeling away the layers of skin is a raw, life-changing experience. The salaciousness builds itself in the scarily upbeat and matter-of-fact commentary by Perry just days before execution. Another character, family member of victim and himself a past inmate, pitifully reveals how he finally learned to read in prison. The officer assigned to strap condemned men on the final gurney tells how he finally snapped mentally after more than 100 “services”, and could not continue. Burkett’s father makes an apparently successful plea for his son’s life from his own prison cell. The new Mrs. Burkett, who met and married Burkett after conviction and incarceration, is openly and spine-chillingly joyful in her marriage and coming child. 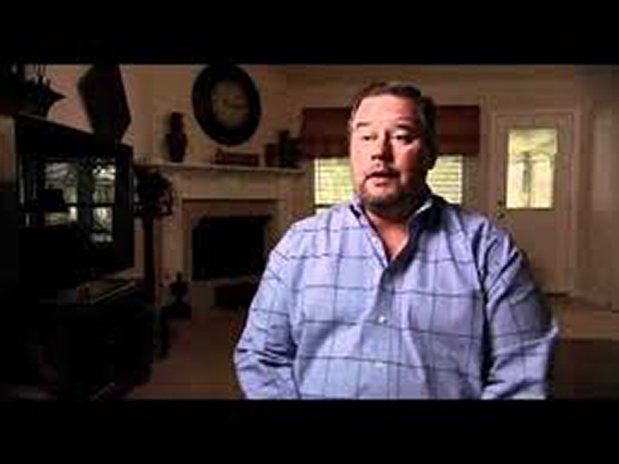 Corrections Officer who skin crawled until he had to quit 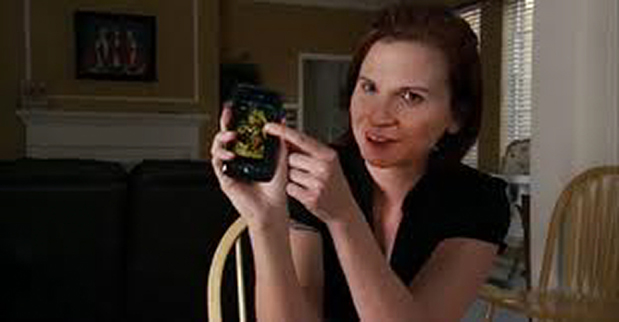 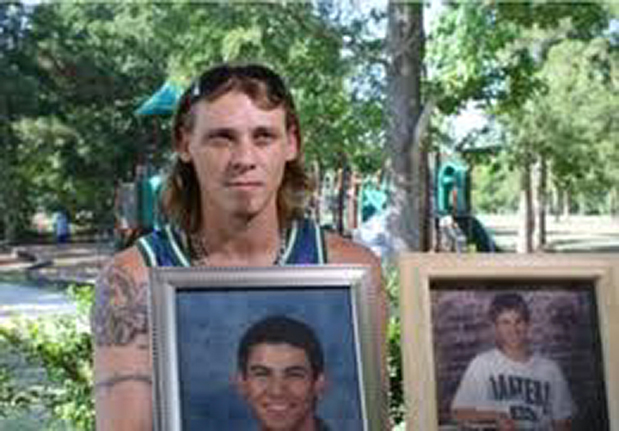 A past inmate himself, one victim’s brother recounts grief and thankfulness for prison

Herzog is famed for “Fata Morgana” and “Fitzcarraldo”. The first I couldn’t bear to sit through and the second is a long-time indie favorite on many must-see lists. Even my 88 year old Papa knows this one well. Herzog has always sought his own funding, something like installation artists Christo and the late Jeanne-Claude Christo. By controlling every step of the shooting, production and finance Herzog can mandate final cut.

As you might guess from the title and subject, “Into the Abyss” is not a chick flick, nor any possible stretch of the definition entertainment. Not a ho-hum NatGeo documentary either. But this chick was fascinated instantly and held spellbound as the killers and all the players in this sordid drama opened themselves in their own words and characters. The articulateness and unvarnished statements with gut passion are surreal in their literal account of waste, failure and pettiness resulting in extreme violence.

Story telling on steroids about a story you never though you wanted to hear.

Karl and I have been remembering details and discussing everything about this movie from interview technique to the cut to lighting, sound, camerawork and most of all storytelling. Comparisons with Truman Capote are inevitable. Every aspect is now etched in our memories. Herzog says he personally is opposed to capital punishment, and hoped to provoke discussion rather than promoting a political agenda. With the timing of focus on Governor Rick Perry’s execution record as a Republican presidential hopeful, “Into the Abyss” was first shown late summer 2011, and appeared at Telluride and Toronto and won the London Film Festival Best Documentary award. It is already available at NetFlix. 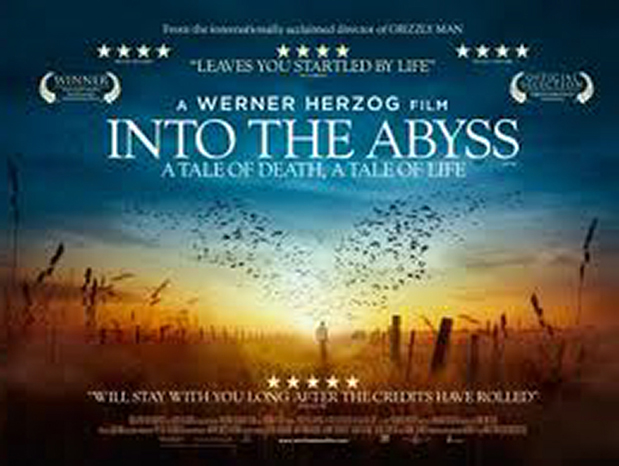 Into the Abyss movie poster