Just like people are shifting from consuming books and video content as physical media to digital and online consumption, Adobe is evolving from shipping shrink-wrapped boxes to offering easily downloadable software through the Cloud. You may or may not have heard about Adobe Creative Cloud, but you’ve probably heard about Adobe After Effects, Adobe Photoshop, Adobe Illustrator, and Adobe Premiere Pro. Creative Cloud is the most convenient and affordable way to get these powerful Adobe Creative Suite desktop tools with ongoing updates, plus many more tools and services like Adobe Acrobat, Adobe Story Plus and Adobe Photoshop Lightroom, so you can deliver professional video productions from script to screen and beyond. All for less than the price of a cup of coffee per day!

On December 11th, Adobe announced new Photoshop features exclusive to Creative Cloud members, the availability of Creative Cloud for teams, and other news.  In this article, you’ll learn more about Creative Cloud and why it might be a great choice for you, and get the scoop on the recent announcements. 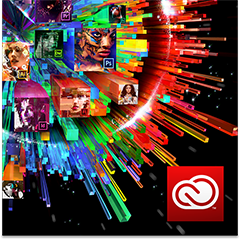 So, what exactly is in Creative Cloud?  For video professionals, Adobe offers industry-leading tools that cover the complete production workflow from ‘plan’ to ‘playback’.  Creative Cloud is the way you download all the tightly integrated Creative Suite tools and services you need to create everything from documentaries and commercials to television news and feature films.  One of the advantages of Creative Cloud membership is the ability to get ongoing feature updates, newly released products and more to stay up to date – all for one affordable monthly price. Creative Cloud gives you the following powerful pre- and post-production software tools:

But these are just some of the tools and services in Creative Cloud that are specific to a video workflow. Read on to learn about all of the other great tools and services that will also help you promote yourself or build your business! 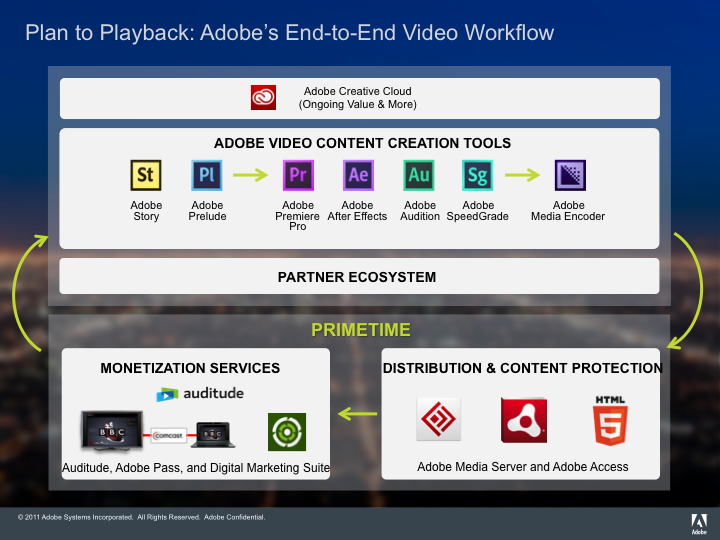 Great ongoing value for both individuals and teams

At $29.99US per month for your first year for upgrading Creative Suite customers or $49.99US per month standard pricing (annual contract), Creative Cloud offers all the tools in CS6 Master Collection plus a host of services including Adobe Digital Publishing Suite, Single Edition, Adobe Business Catalyst, Adobe Muse, and helpful training content.

Aside from flexible membership options, Creative Cloud offers members exclusive and immediate access to the latest updates and product innovations as soon as they are released including:

Also announced on December 11th, businesses or workgroups can now get Adobe Creative Cloud for teams, which offers all the perks of a Creative Cloud individual membership, plus 100GB of cloud-based storage per person, and direct access to Adobe’s support experts.  In addition, Creative Cloud for teams includes administration tools for centrally deploying and tracking your licenses, making it easy to manage your software investment. You can easily assign or redeploy seats – or assign an administrator the rights to do so – as the team grows or changes.  Creative Cloud for teams is priced at $49.99US per user per month for your first year for upgrading Adobe CS3 or later customers, with standard pricing of $69.99US per user per month (annual membership).

Tools and services for promoting your work

Many of our professional video customers use other Adobe products such as Acrobat, Dreamweaver, and Lightroom. With Creative Cloud membership, you have access to all your favorite tools you use on a regular basis, but also have the opportunity to try and use other Adobe products and services, so you can learn new skills and expand your repertoire, or reach new people in new ways.  Many customers use these other tools as a complement to Adobe Premiere Pro, After Effects, and other video tools or to promote their videos to their audience:

And with the Creative Cloud Training offering, also announced on December 11th, you get access to an extensive library of cross-product tutorials and trial courses from renowned training partners Kelby Training, video2brain, and Attain as part of your Creative Cloud membership. You can use Creative Cloud Training to master the art of postproduction using the latest features in Adobe CS6 video products, or learn one of the above new tools that you’ve always wanted to try. We’ll be rolling out this new offering in the next week.

Try it yourself
As you can see, Creative Cloud membership gives you one powerful, comprehensive, and continuously updated toolset for creating and promoting your work using an integrated Adobe workflow, for an affordable monthly price. Try it yourself for free and let us know what you think in the Comments section below. What works well for you? What could we do better? What does Creative Cloud do for you?


* 3D features and some GPU-enabled features are not supported on Microsoft® Windows® XP.
**Retina display support in Photoshop Extended is not exclusive to Creative Cloud members.